I was gifted a Taurus Ultra Lite in 32 Magnum yesterday. The barrel is ported on this little gun. My question is how do cast bullets act in a ported barrel? Do the ports promote leading by the holes? It seems in my mind they should but never having a ported barrel before just dont know. Anyone have any experience shooting lead bullets out of a ported barrel?

The ports do tend to clog up with bullet lube and lead particles. Not sure on how PC bullets would react.

Not exactly a ported barrel on a revolver, but tried building cast bullet loads for a M1 Garand that functioned the action. Soon had enough lube in the gas trap that required stripping the rifle and cleaning. I had read several articles stating this was possible and how the shooter had done it,

The lube cleaning was not a problem, but an inconvenience to strip, clean and reassemble. I was using Lyman 311284, sized .310, slowly increasing charges of IMR 4895, LBT Blue, linotype alloy, military brass, in a H&R late issue Garand.

Not complaining, it was a fun day at the range to learn what will happen. But I gave up this M1 Grand idea and went back to the Springfields for cast bullet rifle competition.

One of the barrels on my Dan Wesson .44 mag. Is ported. When using cast bullets you could see powder, lube and lead build up inside the shroud. The Dan Wesson co. Recommended using jacketed bullets when using the ported barrel which was good advice. Hope this helps.

Powder coating of lead bullets will prevent lead build up inside ports and face of cylinder.

I am using coated bullets so maybe that will work alright. Why Taurus decided to port a 2 inch barrel in 32 mag is beyond me.

Genuine question. If a load does not lead the barrel why would it lead a ported area?

When the base of the bullet passes the port, the hot jet of gas cuts the bullet alloy at the base and deposits it in the ports.  Just like it does in the gas operated semi-auto rifles.

Try using less lub on the bullet. You will find that it will shoot just as well and not fill the port. I do that with my grand and never have to clean it.   Glenn

I have the same good luck with the M1 carbine with the Lee 120 grain bullet and very light lube but both of these bullets are gas checked.   Glenn

I had two S&W 686 38/357 revolvers 4 inch barrels one was magnaported, I was never able to get the same accuracy out of the magnaported gun. It leaded the ports and leaded the barrel beyond the ports with 357 plain base loads. Using gascheck bullets (358156) with full loads cured the leading problems and improved the accuracy in a long series. Jacketed bullets worked fine,

The difference in accuracy may have been gun related, it was still there with jacketed loads. It would have been more informative to run a test series on an unaltered revolver and then port it. I bought the revolver already ported to compare the effect of porting with defense loads. I learned I did not want porting and sold the gun.

I bought a used S&W M-41 (22 LR) with both the short heavy and long light barrels (don't remember lengths, 5-1/2 and 7"?)  The long barrel comes with a removable muzzle brake.  I tried shooting it with the brake on, and after about 100 rounds there was so much lead in it I thought I would never get it clean.  Mind you the brake is past the muzzle crown.  Never used it again.  Ammo was the S&W recommended CCI Standard Vel.

There are several reasons why a lead bullet could lead up the port other than gas cutting.

One could be caused by the edge on the base of the bullet expanding as it passes the port and then the expanded portion could sheer off as it hits the back edge of the port hole. If there is still enough gas pressure to expand the bullet near the port I could see this happening as it is unsupported by the barrel for a short distance. It would then be off balance if some of the lead was lost passing through the port causing loss of accuracy.

It's sometimes very hard to cut a port in the barrel using a cutter from the outside toward the inside. As the cutter breaks through the inner wall of the bore, it will push a burr into the bore.  This can be avoided by removing the metal by EDM process.  it will leave a very nice edge and no burr as the metal is removed rather than being pushed ahead of a cutter. I doubt if S&W would spend the time required to EDM a hole in each barrel they make.  It would really increase the cost of making such a barrel. It would be interesting to find out how they machine it.

One time a customer brought an AR into my shop and wanted me to look in the barrel with my borescope and see if I could see why it shot so bad. When I looked in there I saw a big smear of jacket material on the downwind side of the gas port hole. Whoever drilled the port into the barrel had pushed a big burr in there and left it. It started shaving jacket material till it built up a big lump on the barrel surface. It was shaped like a comet with the tail trailing off toward the muzzle. I gave it back to him and advised he buy a better quality barrel next time. I don't know if he ever got it fixed or junked it.

I'm working on getting my AR to shoot lead bullets and still work the action reliably. I want to increase the size of the gas port hole to allow more gas at lead bullet pressures. Rather than drill it out bigger, I have a very sharp center cutting end mill to make the cut. Usually it will cut a clean hole with a burr small enough to shoot out and not cause a problem.  I'll put an adjustable gas block on it to adjust the gas pressure so that i can tune it to the load that shoots best.

I should ad that I've shot several hundred cast bullets through my AR with a standard size gas port. The were gas checked and never leaded the barrel or the gas system.

I have no intention of trying to hotrod this thing or go through the expense and work of buying a new mold with a check shank and shooting gas checked bullets or worse yet jacketed bullets. If it doesnt work with coated bullets I'll just give the gun back and say thanks anyway. I'm still at a loss trying to figure out why Taurus would put 6 holes in a barrel that's only 2 inches long and chambered in 32 magnum. Let's face it a 100 grain bullet even at 1000 fps, which I doubt you could reach in a gun like this anyway, ain't no fire breather.

I had my Remington1100 12 gauge ported by Magnaport. The EDM machining was top notch and it did tighten up the patterns. Recoil was not reduced, but that was not the objective.

Recoil reduction is controlled by the ratio of bullet weight to powder charge as well as the pressure at the port. More powder more pressure = more effect.  Porting can reduce recoil but it also increases muzzle blast and increases muzzle flash and puts it right up front. You will shoot a ported pistol from a retention position only once!

Good luck with the Taurus

Here is a ported Glock: 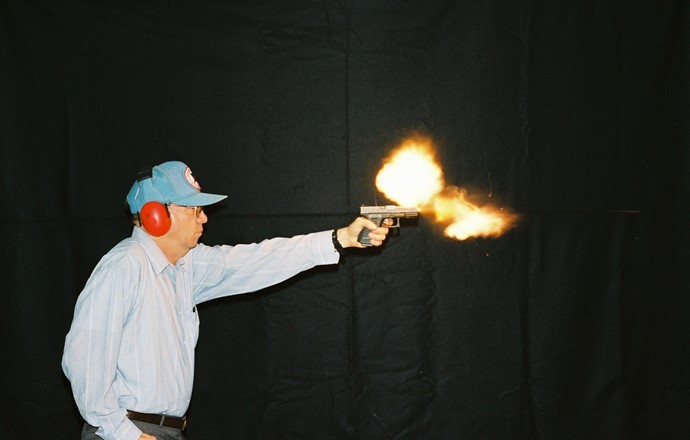