Can one tell BNH of a casted bullet with out the Lee and that other hier cost hardness testing tool?

Well normally David bears the brunt of my questions. I did not want to risk interrupting his resting.

Question:  Is there a way one can check the BNH of a casted bullet with out the Lee and the hier costing hardness testing tool?

The reason I am asking is I ended up with a lot of debree (looked like sand. But did not feel gritty like sand) as I was casting bullets yesterday. That was sitting on top of my 20 lbs of Lyman #2 alloy, and under the thin layer of the cat litter that I have placed to stop the surface oxidation on my pot.

I did not have that problem last week with the 50lb of Lyman #2 . The 50lb I am working with this weekend is from same place but different batch. Only other thing is these 2lb ingots were wrote on Dan #2 in permanent ink pen. Since it is a bottom poor pot I do not stir it on a regular basis.  When I add the sprue peices I use a spoon to push the pile under the thin layer of litter.

Yesterday at 6am I started the Lyman Mag25 pot which was full. 15lb from last 50lb and 10lb from current batch. Once pot was to 750 deg (22min) my Lyman 358439 155gr HP mould was ready. When the pots alloy height was 3 inches low I would add in the defected bullets and trimmings (spruce cast offs) when pots level did not raise back to top after trimmings had melted I would add a 2lb ingot. At 9pm I noticed that the ingot I added did not want to sink past the layer of cat litter. When i used my table spoon to move the layer of cat litter aside I saw what looked like sand. I had to scope it and the cat litter out.

Once I got the stuff out the melted alloy was nice and bright. I quickly added a new thin layer of cat litter since the shiny alloy was starting to discolor. I had to re heat my mold since it took me just shy of 40 minutes  to address the issue. I decided to switch to wad cutters since I owe my friend 500 ct of those. As it was heating I realized I should eat something.  10:10pm I started casting using Lyman 358495 148gr WC and casted until 4am.  This morning after a short nape as I was going threw the cast results, sorting for defects . As I was looking for unfilled lines and rounded edges I would randomly select 30 out to weigh. Not to sort but just curious on my weight deviation from sections. As I cast once the shirt that I drop casts on when they drop from mould is filled, I empty the shirt into a box. It is from those groups that I take a random 30ct from to weigh. My HP bullets had low of 159.2gr and high of 161.8gr from earlier in the day a low of 160.0gr and high of 161.9gr.  My WC low is 140.3gr and high of 144.0gr. The WC I casted last week in Lyman #2 first batch low of 142.5gr and a high of 144.0gr. So I was worried that I lost some of the alloy mix.

I took a hammer and drilled a hole in handle and screwed the hammer to my table leg. That way I can lift the hammer 4.5 inches and let it drop on a cast bullet. My thinking was to measure diamiter and length of bullet before I drop hammer on it and re measure.  I was expecting the pure lead version of my WC to squish more then the Lyman #2 did. Which it did, dia grew .005. The wheel weight and the Lyman #2 alloy acted the same though. They both grew .002 dia on all ones tested.

I am just wondering if there is a way to check the bullets other then my hammer method which is still leaving me questioning what the heavy sand like stuff is.

I think it was in a recent Fouling Shot issue where they discussed using different hardness of drawing pencils, sharpening the lead to a chisel point, and you can estimate BHN from what the softest pencil is that can scratch the lead surface.

Thank you.  I will take a look at my Fouling issues.

The article that Mitch was referring to was written by me. It is on the forum so you can pull it up and read it. The name of the discussion was-Checking Lead Hardness With Drawing Pencils. It works very well. It takes a little bit of practice to start with.

You did find my article. The first entry at the top of that thread was mine. There was a lot of additions to my first entry, It Helps if you have some samples of known hardness to check your findings against when you first start using the pencils. Hold your pencil like you are writing and don't have a real fine sharp point. A rounded point is suggested. I feel confident now that I have used these pencils that I can get within +or- 1 on the BHN  scale.

Thank you for the link .

I guess that if a 38cal bullet does not give enoufe surface area to do the pencil test, I can occasionally pour a test block as I am casting bullets.

You can do a thirty-eight bullet but a bigger sample helps. I check my ingots and mark them as to the hardness.

Why don't you try filing the length of the bullet flat until you get a sufficiently large enough surface to test with the drawing pencills?

Yes, filling a bullet pulled from a batch ( or using rejected bullets for filling testing automatically ) . Thank you for the idea.

I cannot help with the hardness question,the matter that I found interesting is the story of the sand like material and the cat litter.It has been said that there is more than one was to skin a cat and there appears to different approaches to casting a bullet.I may be old fashioned but I find that fluxing and stirring the alloy when adding material to the pot works for me.

Only reason I don't flux every time I add alloy back to the pot is because I lower the alloy level so fast. A result of my casting set up, I would be fluxing every hour. The cat litter is to keep the alloy from discoloring and building up the weird layer (not sand stuff) it was a sugestion to  solve the metal oxidation..?

If I get sandman again with the rest of the alloy from this order, I am going to have to flux and then pore the alloy into ingots and get the whole order fluxes and poured into ingots. I just did not think one needed to do that if alloy is from a foundry.

On a plus side the foundry said to keep all the sand stuff and if I get more then a table spoon of it every 8 hours they will mail me alloy weight equal to sand like stuffs weight.

... another advantage of my low bar plinking lifestyle is that i never flux my scrap metal ... i just add more scrap and keep it covered with oil dry ... i figure my dipping keeps it stirred up enough ....  i am fascinated that the oil dry never gets into my bullets ... even though i get a dipper full each dip ... maybe the oil dry dust does some fluxing ? ...

i also stare at those swinging ball bearing momentum gadgets ...

I was never able to get the hang of using the art graphite pencils one handed to check BNH on the cast bullets. But MidSouth finally got the Saeco hardness lead tester in stock. I will be ordering it August 1st 2020

I have an old LBT hardness tester, not sure if this is still in production, but it is easy to use and I don't think it cost too much, I bought it back in the '80's.

I printed this out and pasted to the inside of my pencil box. 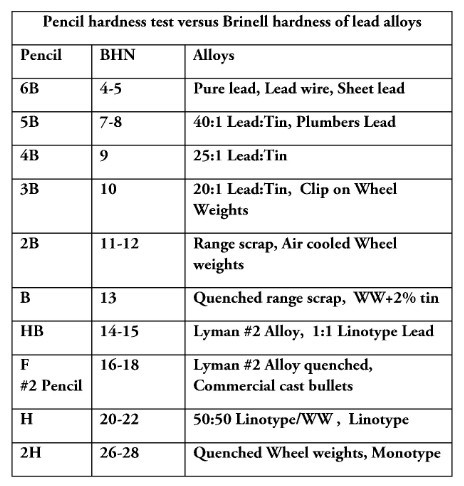 According to tracking # my Saeco hardness tester will be delivered by 8pm 08-07-2020 just in time for the week end.

Out standing results with this Saeco lead hardness tester. It is even usable with one hand. But most important is now I can check every defect bullet for its hardness, to see if I am getting any difference in a casting session. All of this weeks castings defects gave a reading of 8  I am using defects since it puts a hole in the top of the bullet. If it is a spear point bullet you need to file a flat to it, so a defected bullet is best used.

At least until my wife and I get better at casting we will have plenty of defective casting samples.

We casted with WW over the weekend. It was reassuring to be able to test our casting samples pulled and set aside every half hour on a prepared paper with time marks. Today I was able to use the Saeco tester on the timed culls and on our defected cast bullets and I got a 6 on every one. My worry that we were not keeping the 8 lb open top pot agitated enough to keep alloy mixed evenly threw out our five hour casting session is now laid to rest.