The Frank Marshall Exert That Was In The Blog

I was greatly pleased, to see a Frank Marshall exert in the blog. Frank Marshall is the reason for me becoming a Cast Bullet Association member. I ran across an ad, either on E-bay or Gun broker, selling memberships to the association. Someone, from the association, had put a neat little advertisement together to draw interest. This particular ad, contained one of Frank Marshal's writings and I was immediately hooked. I immediately joined and couldn't wait to get my first magazine. Shortly there after David Reiss suggested that I buy the Frank Marshall CD. I not only devoured the CD, I watched it about 3 times and occasionally I bring  it up and find certain articles to view again.

When I joined the association, i believed that there would be more articles featuring cast bullet hunting rifles and hunting stories of such in the Fouling Shot and on the forum. I was sort of disappointed as to the lack of such.

Frank and I share a lot of things in common, especially when it comes to cast loads to be used for hunting. I have always been a fanatic for accurate hunting rifles and light weight hunting  rifles. I discovered way before the 77 years of age, that I am now, that you carry a hunting rifle much more than you actually shoot it. I demand top notch accuracy in a hunting rifle and it must be able to put that first shot into the spot at which you were aiming. It must also be able to do that regardless if the weather is 28 degrees or 80+ degrees.

This past deer season, I hunted with cast bullets. I wanted my first cast lead kill to be a nice trophy. I let a lot of small bucks walk in the process. I saw the trophy buck that I was after 4 times and never did get a shot at him. I saw him so much, I think he wanted to adopt me. As the old hunter saying goes, he always caught me with my britches down.

My question is-am I the only member on the forum and association member whose interest is in highly accurate cast lead hunting rifles? 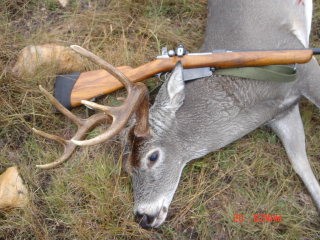 David, Your post reminds me we need to keep better track of our cold bore hits with a hunting gun. I'm guilty of just sighting in with a warm barrel. I'm going to make keeping track part of my routine from now on.

Never have I seen a problem presented right along with the solution in such a tidy package.

David Reiss and I talked yesterday about the need for more TFS articles on topics that would appeal to the more than 75% of our members who aren't competitive shooting.  (Actually we don't get many articles about competitive shooting either but we can't shake the impression of some that CBA is for match shooters.)  We  haven't done a poll for a few years but both of them I can remember in the past also showed that hunting articles were one of the popular types. However, I believe that my article on cast bullets for squirrel bullets in TFS #261, a year and a half ago, may have been the latest article, although a search, which I will do, may turn up other recent articles that I can't remember.

We already knew that David, Larry, and Lee write well.  We now know they have a wealth of hunting experience with cast bullets. Please put down some of that experience on paper and send it to Glenn. There is enough makins in the posts for at least three and maybe a dozen Fouling Shot articles. Your articles may inspire other hunters to send in their own stories.

TFS is the main member benefit for most of our members.  The CBA lives or dies on keeping our membership up.  Keeping the quality of our journal is critical.  Writing a good article is great contribution to the CBA.  I hope you three and others reading this thread will consider writing.

Wish I could write better?

Anyway,was out varmint chasing yesterday with my DD(daily driver) R700 7-08,130g Lee. It isn't the most accurate rig here from the pure sense,that probably goes to the 6mmR 700,with the Saeco 85... but it's setup to take the bumps and grinds of life on the trail.

Have smaller calibers that might make a touch more sense than the 7 on certain species of varmints. There's an ADL 223(spotter brrl)that thinks itself a target rifle with the Lee 55g,and a 22-250 R700 built up from parts that dotes on the RCBS 60g. It too can hold it's own against any JB rig short of all out customs. These are highly tuned,and refined factory hunting rifles that just so happen to shoot cast. Never did view cast as a handicap to either,accuracy or terminal performance. Velocity seems to be bad juju for a lot of shooters so won't dredge that up,too much. I'm WELL into jacketed book loads.

One of my passions is problem solving.... it's what put/s food on the table for goin on 50 years. The hurdles in cast are,simply that.... a hurdle. With enough resources,and dogged determination most are either solvable or there's workarounds. The magic comes once in awhile when a detour in some of these processes actually turns into a valuable asset. I've had a few.

Will be back in the field today. Hope you feeling better Mashburn. Taken me almost 2 years rehabilitation hitting a deer on one of my sportbikes. Takes time,and determined training.

Was glad to get your response and very glad  to see someone else who builds their own rifles. To me, and I am sure also  that you share the same feelings, there is nothing more rewarding than to build a rifle and take it out shooting for the first time, and then to the woods to harvest a buck. Looking at your .35 Remington built on a 91 Mauser is a fine example of a rifle build that doesn't cost a fortune.  I have a collection of Rifleman magazines starting from about 1948. Things have changed a lot since those days. People used to like to take old military rifles and turn them into a fine firearm. People seem to have lost that ability and probably that interest. I like to blame schools for doing away with shop classes as the cause. Now ,people who saw out plywood in the form of ducks, old ladies bending over the flower bed and such are considered to be craftsmen.

I have been reworking firearms since Jr. High School age. When I built my first bolt action rifle stock from a blank, I had to make my own inletting tools as I needed them because I couldn't afford to buy them and didn't really know what specialized tools were. When I needed a inletting tool for a certain need, I just built one that would do the job.

I think the readers would enjoy for people like you to do a write up on build ups of such rifles, or even just pictures would be a hit. If I ever learn to post pictures on the forum, I plan on doing so. I think that there are a lot of people out there who would enjoy reading about such things and maybe figure out that they can do the same thing. I started building my own tools in the beginning and now I have a complete machine shop, but I think I enjoyed the old way that I used to build rifles more.

It would be nice if you left Arizona, and moved to my neighborhood. I think that you would be my kind of neighbor.

Keep up the good work,

Glad to hear from another rifle builder and tinkerer. I spent years buying rifles off the pawn shop racks and working on them to get the maximum accuracy that they were capable of, and then I would set them aside and buy another one .About 25 years ago I discovered Gun Broker and turned most of those into more rifles to play with-it's a never ending hobby. After years of such, I started building my own custom rifles.

I'm glad to hear you speak of velocity. You can definitely build a cast bullet rifle with a throat cut for a specific bullet along with a lot of other things and shoot outstanding groups, however these groups are going about the speed of old major league knuckle ball pitcher Hoyt Wilham's knuckle ball. Don't get me wrong, I'm not against this type of shooting and the people and rifles, that do so. it is fun, but since I'm not a target shooter, I'm a hunter ,I want all of the accuracy that I can get  plus all the speed that I can get by with.

Until I joined the Cast Bullet Association, I had never heard of powder coating bullets and I became obsessed. I spent over a year trying to make the perfect powder coated bullet. I didn't shoot any of these the first year, I just experimented with different methods and techniques of doing so, I can now control the thickness of the powder coating just about on every bullet that I coat. Last fall is the first time I took any of these to the range .I was shooting my little .17 Mashburn rifle and man was I rewarded with a good surprise. I shot some groups, some under 1/2 inch and some slightly over 1/2 inch at 100 yards and these babies were zipping. I'm not going to work with that rifle for a while because I've got bullets made for several other larger caliber rifles. I also have another .17 that I'm going to work with. I can set the first .17 rifle aside and know that I can take it squirrel hunting and it definitely will shoot minute of squirrel head groups..

Most of the calibers that you have, I also have. I haven't gotten around to shooting all of them with cast lead, but am working on it. Which of these calibers is your favorite to shoot and which caliber do you prefer for deer or hog hunting? I'm glad to find another hunter with cast lead experience.

Glad to hear from another cast bullet hunter. I have most of the calibers that you mentioned. I haven't used cast lead in all of them, as of now, but I'm working on it. Which orf those rifles is your favorite to shoot and which is your favorite for deer and hog?

"You spend a lot more time carrying it than shooting it" truer words have never been spoken. When you think of classic hunting rifles, the Win 94/54/70 (especially the featherweights), Savage 99, Ruger Deerstalker/#1/#3, Marlin 336/1895, Bushmaster/Woodsmaster, Mauser 98K, BLR (I'm sure I have forgotten someone's favorite), they are all handy and easy to carry, even scoped (old school fixed power).