Powder and the 38 Special

OK guys, I'm not going to give up till my 38 HBWC loads produce an ES of 5fps and 2" groups at 100 yds.  Or maybe when I go down to the local supplier and the shelves are bare. In the "Pounder Labs Video (u-tube) on 38 HBWCs and cannelures"  The guy states that they used Hodgdon Titegroup because it was less position sensitive.  Anybody have any experience with this powder in a 38 spec and HBWC?

My experience with 3.4 gr of W231 is velocity is about 50fps less when the powder is level versus when the revolver is tipped and powder is at back of case.  As we all know, the 38 spec case was designed as a BP cartridge. Somewhere on u-tube there is a video (Fortune Cookie?) in which 38 HBWCs are loaded using BP and the ES for 5 shots is 10fps.  There is no way I will shoot BP in my PPC revolver.  Years ago I thought Trailboss was the answer, but I get velocities spreads of over 100fps when using it.

So, next question:  Since the 38 spec is such a popular cartridge, why isn't there a powder that is bulky enough to fill the space between base of case and bullet and produce a more consistent burn?  Was HP38 suppose to be that powder?

I have used TiteGroup in 38 Special and it is an excellent powder. 3.0 grains behind a 148 gr. solid base WC gives 800 fs in a 6 inch bbl. I have not explored position sensitivity in revolvers, but in rifles it is very good despite the very light charge. Is it better than Bullseye? I think maybe but any difference is small and probably inconsequential.

You may have answered your question. Trail Boss is what you get when you puff-up smokeless powder to minimum density. The instability may be part of the deal.

Soft bullets and Bullseye have always been the ticket for me with WC bullets in .38 Special whether hollow base or solid. Bullseye is not position sensitive; it works in 30/06, and .375 H&H producing 3 inch groups or better at 100 yards with plain based bullets at 1100 to 1200 fps. 231/HP -38 (same stuff) work well in 38 Spl. too. I’ve found that Titegroup leaves unburnt powder in the bore with standard velocity loads in .38 and .44 Special. I don’t know if that matters. I’ve only used it with SWC bullets with good results.

WCs at 100 yards will be a challenge, years ago I would switch to 158 RN on windy days shooting PPC because of wind drift and stability issues at 50 yards. I’ve always wondered if a quicker twist that standard would help wadcutters stabilize better. What twist is your PPC gun?

Steve: It's that time of the year when I get antsy and start thinking about all the shooting projects I have planned for the summer.  Then reality sets in when I realize that the level of experimentation I want to pursue has been determined by the availability of components.  Up here on an island in SE Alaska, components are hard to come by in the best of times.  I made a quick search of various component supplier and quickly realized that what I have is what I will be able to work with.  So, as far as powder is concerned, I will be shooting W231.  A search on the web lists W231 and HP38 as the same powder.  In your load development with with Titegroup loads, did you come up with any data concerning the ES?   Bill

W231 and HP38 are the same and made in the same plants. They are different lots but lot variation is small.

I usually record average and standard deviation shooting 12 round tests for group and velocity. A quick look shows SD 9 to 16 which would give a 95% extreme spread of ~18 to 32 fs in 800 fs target loads.

Wadcutters go non-linear somewhere over 50 yards. Let us know what you find.

Little Debbie: The revolver I am shooting is a Day Arms PPC and the twist is 1 in 10. I think that is why the HBWCs are stabilized at distances of up to 200 yards. See "Wadcutters At 200 Yards"  in TFS#258.  Last summer I did a lot of testing at 100 yards an a article describing results should be coming up in TFS in the near future. Bill

Steve: As I mentioned in my reply to Little Debbie, I have been shooting HBWCs out to 200 yards and they are still stable.  Is it the 1 in 10 twist?  When shooting at 100 yards I can keep them in a 4 inch square if velocities have an ES of around 30 fps.  By the way when I looked up my old data when shooting factory HBWCs (Remington) from the 90s, the ES was 30.  There should be an article in TFS in the near future showing results of my 100 yard testing.

on an island in SE Alaska

Yes, that was with TG. I just looked back at bullseye results, lots of accuracy testing, but I did not do any velocity runs. I may have to put that on the list if I ever get more BE.

The usual 38 twist is one in 18, so the one in 10 is giving the extra stability. I look forward to your article.

Jimmy: No I'm off to the southeast on Prince of Wales.

Steve: I sort of am out of the loop up here, and it has always been hard to get shooting components, but it has become apparent that getting anything at present is pretty much out of the question. So, I guess my desire to try different powders is not going to happen.  I have attached a picture of a 5-shot 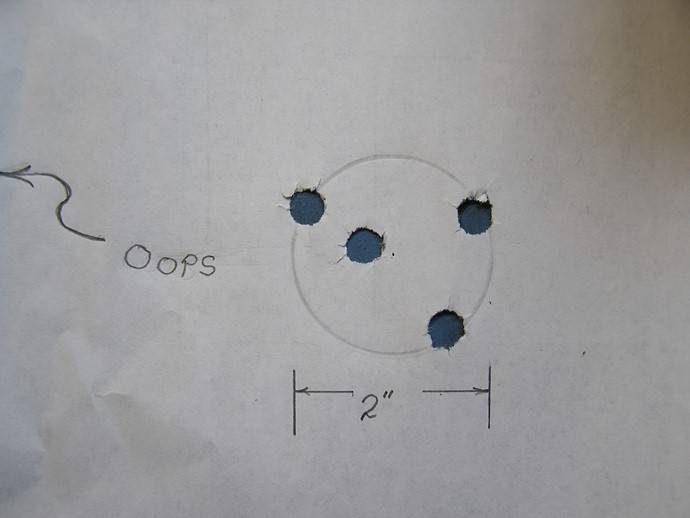 group I shot several years ago using my homemade machine rest at a distance of 90 yards.  Of course this is not a typical group,  I have included the picture to show what I think the revolver w/HBWCs is capable of.  The 1-10 twist sure seems to work.

I'm a great fan of Titegroup.  And I hate using it like I hate salt on watermelon. It's destroyed at least 3 - 4 powder hoppers over the last 30yrs.

I also loaded and shot at the same time .38Spl WC loads using the Hornady swaged 148gr swaged WC. I used a SA S&W M14 made in 1968 that I purchased from a retired LAPD in 1979. It had been reworked to have .358 cylinder throats and a .3575 bore.  I started using Titegroup in those loads simply because it was always in the powder measure.

With the previous load of 2.7grs of Bullseye under that same 148gr WC, I averaged 1 1/2" groups a 25yds with a 2 hand hold. (Young eyes & hands, never appreciated until they're gone)  Switching to Titegroup I didn't notice ANY Difference in accuracy.

But then this is the only accuracy comparison I ever made. I had no way to check ES back then. I never noticed any unburned powder in the bores. My Kids did all the Cowboy Gun cleaning and never said anything, but then I never asked either.

The .38Spl WC loads did leave a bit of unburned powder in the bore. A lot of 500 REM Match cases were kept separated for those WC loads, I used REM 1 1/2 Primers.  Still using 437 of them. But then Hornady WC's not longer come in boxes of 500 anymore. And I'm just not a good enough shot anymore to warrant wasting money for bullets when  I can't fully realize their accuracy potential.

That light charge of TG is probably not listed any longer either. Don't even size with a steel die anymore. Probably why I've really started to lose those cases to cracked mouths.

BOY HOWDY I really wandered all over the place in this post. Distracted by an old Joel McCrea Western.

I always like a challenge. But since I have struggled to get 2" at 100 yards in a M1903A3 and the best hand sorted bullets I can find, getting that out of a revolver seems like a bridge too far. I still like playing the game but I guess the only thing you have is less barrel time and less of a chance to move while the bullet is in the barrel. It is a bit like analytics in Baseball. If you can see a number and apply it to a player, use it. Maybe the fun is gone but the chances of a positive result are greater. Once you get to 200 20x what is left? I have a Henry 22 lever that is so accurate, I get bored shooting it, once the target center is gone, you start looking for staples, other bullet holes, printing, etc. It sounds like you are still having fun and have something to keep your interest. Keep us posted.

I always wondered if the 1 in 10 twist would help stabilize wadcutters at ranges over 50 yards. Apparently it does. I look forward to the article and the results of your experiments.