You have probably read some of my posts about my .17 Mashburn, that I built myself and have the chamber reamer that Mashburn himself used, a shop made reamer. The first .17 caliber rifle that I ever saw was a .17 Mashburn built on a Winchester High Wall, and that was in the summer of 1962. I have tried to find it in old books and searched the internet with no luck. Is there anyone out there who might possibly have some old wildcat cartridge book that might have information as to my cartridge? I can find information on all of his cartridges except my little .17. I would greatly appreciate your help,

I have to admit I haven't read your other threads on this rifle and cartridge in any detail, but I have been reading Parker O Ackley's Handbook for Shooters and Reloaders copyright 1962 and remembered seeing what I think you are looking for. 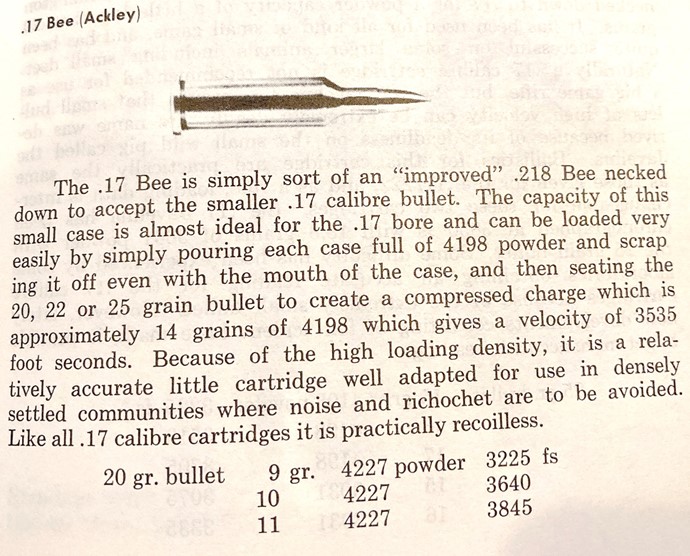 Besides the Ackley Bee there's a 17 A&M, 17 Killer Bee , 17 HeeBee and your 17 Mashburn. Some where on the internet is a picture that shows all 5 lined up. I spend a half hr trying to find it with no luck. I was thinking your case has the shoulder blew forward and was between the Killer Bee and HeeBee case. Maybe Ken Howell book on cartridge conversions would have it but I don't have access to my copy right now. Hopefully another member has a copy available.

Maybe a letter to handloader magazine? There are a couple guys their who specialize in wildcats and cartridge cases. Just a thought.

Thanks for your response. The .17 Ackley Bee is not what I am referring to. My little cartridge has the shoulder blown a way forward and leaves a neck that is only.172" long. It has about the same case capacity as a .17 Mach IV and the cartridge only has about .003" body taper. I also have the .17 Ackley Bee that you sent the info. on and that cartridge is well known and documented. I Think you greatly for taking the time to reply and send the loading information on the .17 Ackley. I am just starting to work up loads for mine at the present time. Ackley's old manual had some scary information on powder charges and velocities.

Like you, I have searched the web and can find everything except the .17 Mashburn. If you happen to locate something in the future, please let me know. I'm also going to search for some more cartridge books and see what I can fine.

Thanks a lot for your reply,

Thanks for your response. I may try that,

Sorry about that.  I had just read that page from his book the other day, so it came to mind immediately when I read your post.

I deleted the load data from Ackley's book that I attached. If it is not safe, I certainly don't want to put it up on the forum.

It depends on what kind of rifle that you were using as to if the loads would be too hot or not. The maximum load he showed using a heavy load of 4198 Would be too hot for .17 Ackley Bees built on such rifles as a Martini Cadet. I can vouch for that but that load in my rifle with a larger volume case would be quite safe. I've used several of his loads in some wildcat cartridges, but I always consider what rifle that i am using. I can't remember if he ever listed what the test rifle was or not. I wish that I had made a copy of the loads you posted before you deleted them, he had used a couple of powders that I have never tried in a .17 cartridge.

I put them back in my original post.  I was just alarmed that I might have posted something that would be unsafe to follow based on your first comments.

He had other .17 caliber wildcats in this book, but they were based on the 22 Hornet and the .222 Remington cases.  Most of this book is about wildcats of one form or another.  I imagine back in the early 60's, working up loads for newly created cartridges must have been as much about intuition as much as science.

Thanks for putting them back. I once had an old Lyman loading manual from decades ago that not only gave load information but also directions for forming cases from other cartridge cases was given for most calibers. Some of the loads would be considered a way too hot by todays standards  and todays loading manuals have gone the other direction, which is very cautious.

Ray H's post made me curious, so I searched a bit tonight on the .17 calibers.

This is a post on the .17 Hebee, which the author describes as a 17. Ackley Bee with a longer case and a shorter neck.

He has some loads with VV N-130 powder and Reloader 7.

Just in case it is any value to you.

I also found this photo, which had a lot of .17 caliber wildcats, just for general interest. 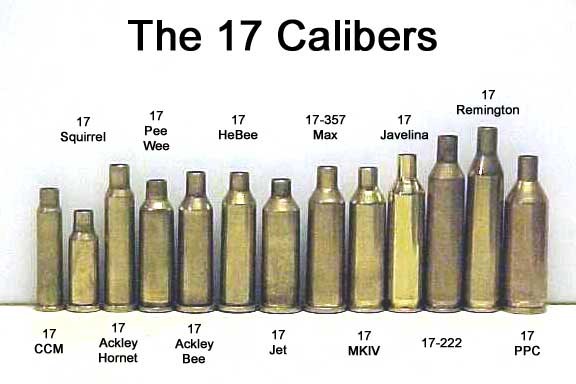 We still haven't found it. it is based on (.218 Bee-25-20-32-20 cases) I have made cases from all of them but the .218 Bee case is much easier. The case neck is only .172" which is the same as the diameter of the bullet. It has almost the same case capacity as the .17 Mach IV that is pictured in the post. I have been told he created it in the 1940's but am not for sure. When Mashburn Arms created a new wildcat, he always had to out do PO Ackley. Thanks for the nice picture chart.

After our last contact, I pulled up info. on the .17 Pee Wee. there are some similarities. The one in the picture appears to be a rimmed case but according to found information it was originally made with .30 Cal .rimless carbine cases. The neck on my .17 is much shorter, like I said, .172". I have Dick Saunders book on .17 caliber shooting. He not only experimented with existing .17 caliber cartridges but invented several of his own. He didn't go into as much detail on the .17 Pee Wee as he did other cartridges. He mentioned there there were lots of versions built on different cases but using the same name. His version was based on Bee cases.

Here is what I believe caused the .17 Mashburn to come about. Like I said before, Mashburn Arms would try to out do what ever wildcat that others produced. Therefore I believe the .17 Mashburn that I have is what he did to out do the others. But I can't understand why we can't find any information on the cartridge. I know for a fact that my reamer came from the Mashburn Arms shop in Oklahoma City. Of all the .17's of the size we have been discussing, mine has more powder capacity. This discussion has been very enjoyable and informative to me. Thanks to all who have contributed.

The .17 cartridges that you mention are not all familar to me. I will do some more research and see what I find. i think the last post that I made a few minutes ago probably explains most of it.