I got a service grade M1 from the CMP about a month ago, a Springfield with a serial number that puts it in 1952 and a SA 4-53 barrel.  Had it out to the range twice so far, the first time with light, non-cycling loads that printed 10-shot groups from 3 to 4.5" at 100 yards.  I shot these loads with a drilled out gas cylinder screw so there would be no "partial cycling."

Last time out I shot cycling loads in 8-shot groups.  Some groups strung vertically and some horizontally.  Clue:  I was cranking the sights around so I could place multiple groups on the large, MR-31 targets.  I wasn't really putting 2 and 2 together until I got near the end, and shot a "group" that was actually two 4-shot groups, each about 2", 4-1/2" apart diagonally.

The best group happened to be fired without a sight change, shooting on a different target.  It was a nice 1.88" cluster fired with the Lee 312-185 cast of 50-50 WW and lead, heat treated, LBT Blue lube, 40 grs. of H4831SC, a 3/4 gr. tuft of Dacron and a 1/16" LDPE wad.  This bore is lightly pitted, and the LDPE wads seem to help prevent leading.  I got some leading the first time out with the light loads and no wads.  These cycling loads did not lead.

I suspect something wrong with the rear sight, but I'll defer to the experts.  It seems to be tight enough, as the aperture cannot be pushed down with the thumb when 2 clicks below the top of adjustment, and the windage does not adjust easily.  The aperture has a very small amount of side-to-side movement, but I put an indicator on it and got about .005" movement.  That should equate to less than 3/4" at 100 yards.  The trigger guard seems to pull the receiver into the stock snugly.  There is no perceptible fore and aft movement of the receiver in the stock with the trigger housing removed.

Keep in mind that the Garand has a lot of furniture hanging on it and it was made to function at a certain pressure range. Wandering groups denote that you didn't match what it was intended for. That Lee bullet, while a good bullet, doesn't have a lot of lube capacity either. I use a heavier bullet made especially to use in Garands. Experiment with a little more bullet diameter and heavier weight.

Be sure the Gas Cylinder is tight on the barrel splines and not wobbly. The upper handguard should not touch the receiver. The lock up of the trigger housing to stock needs to be tight and not easy to engage. It can be a great shooter, but usually the modifications push it into match rifle category, not as issued. If all of these check out, the load may need tweaking. Remember the M1 even in top shape is probably a 1.5 MOA rifle. Somewhere on the Web is JC Garand's article on "Grooming the Garand for Perry". Good tips but once you start gluing pieces together you change its status.

M1's and M14's are different animals. This will be a long road of research to find what you need to do to the rifle and load to make an "as issued" rifle shoot well. Good Luck.

Thanks Wineman, I do want to keep this one in the "issued" category, which limits me to just swapping GI parts.  I have another one that is glass bedded and match accurized, and the trigger guard actually snaps a little tighter on this CMP one.  When I took the gas cylinder screw out I checked the gas cylinder and it didn't have any movement so I left it alone.

Thanks Ric, I guess I do have my work cut out for me!

It has been called the 30 Sil Heavy, produced by BRP untill the cherry broke. MP molds has the design and hasn't cut it yet and Accurate produced a .180" meplat flatnose version. Not everyone depends on Lyman, Saeco, RCBS or Lee to produce molds for them. It shoots quite well out of worn throat 30-06's and Garands.

Which unfortunately not publicly cataloged for reasons known only to the designer, making the design effectively unobtainable.

The Lyman 311679 is a splendid bullet for the M1 rifle....provided you can obtain an example which casts a round bullet of sufficient diameter in the critical locations.

"Accurate produced a .180" meplat flatnose version. " Which unfortunately not publicly cataloged for reasons known only to the designer, making the design effectively unobtainable. The Lyman 311679 is a splendid bullet for the M1 rifle....provided you can obtain an example which casts a round bullet of sufficient diameter in the critical locations.

Here’s are a really good post from the other site. I use the NOE 299 clone in my M1s with great success. I haven’t had much luck with the plain based version, but the powder coated gas checked version shoots great with H4350 or H4831.

Well I took the M1 out again today to see if I could come up with any answers.  The short answer is "no."  But I'll bore you with the details anyway.

Back in the 80's there was a Walgreens store near here that had quite a gun department, and usually had a number of milsurps.  I was in there one day and saw an M1 on the rack with a plastic bag of parts taped to it.  The tag said, "(if I recall correctly) As-is, $241."  Well, that was hard to pass up so I grabbed it.  Got it home and started putting it together.  The only part missing was the firing pin - not too bad.  The bore was an absolute sewer pipe, but I shot it a bit anyway.  It shot surprisingly well, even with cast bullets, but the chamber was also pitted, and I concluded that was going to be hard on both the brass and the extractor, so I had it rebarreled with a Douglas barrel, and accurized it into a match rifle - free floated handguard, glass bedded, etc.  For load work-up I decided a globe front sight with an aperture insert would be helpful, so I made a dovetail clamp block to attach a Redfield globe sight to the top of the gas cylinder: 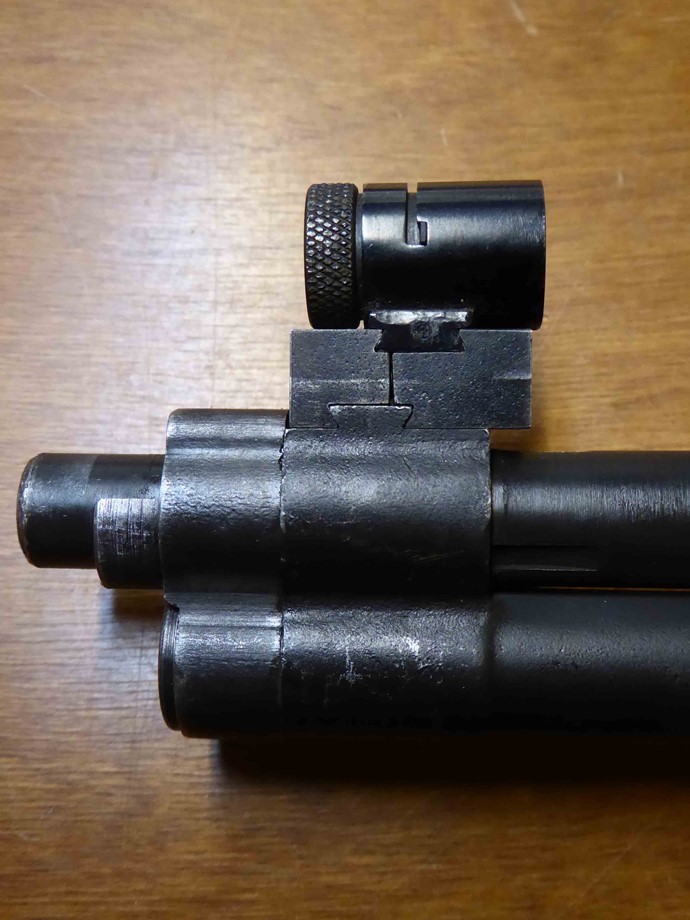 Ok, ok, I know it's on backwards.  It was late.  Works the same either way. 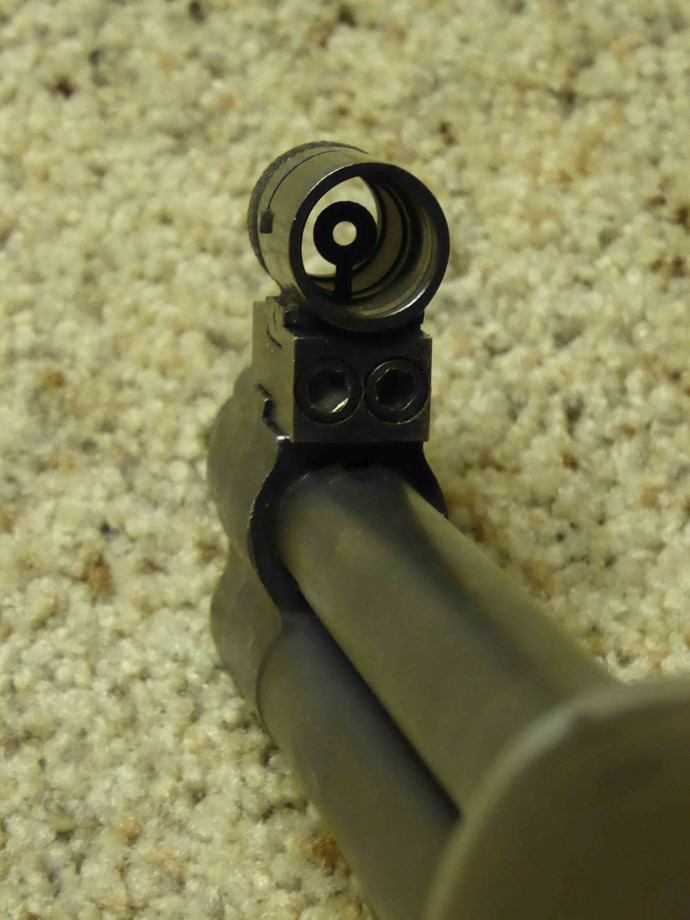 This sets the front sight about 1/16" higher than the GI sight, so I just ran the rear sight up 6 clicks and I was good to go.

I brought 32 rounds of the load that shot a 1.88" 8-shot group the last time out, and proceeded to (basically) spray them all over the target.  This shows the four groups: 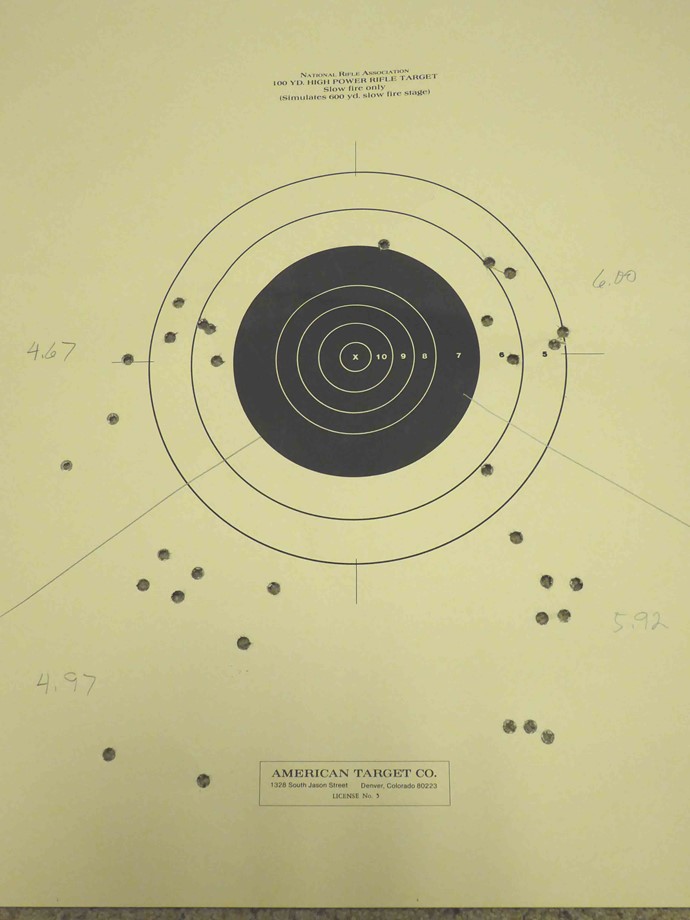 The first and last groups were the largest, and there was no leading in the bore.

Well, I really couldn't blame it too much on an iffy sight picture, everything was rings with the bull in the middle.  These groups were shot with the Lee 312-185, with a nose that just barely drags on the tops of the lands when you stick it in the muzzle.  I don't really think that's enough, but it did shoot a great group last time....

I also shot two clips of the 314299 with the same load, but the bullet is too long to allow a poly wad, so it just had the tuft of Dacron: 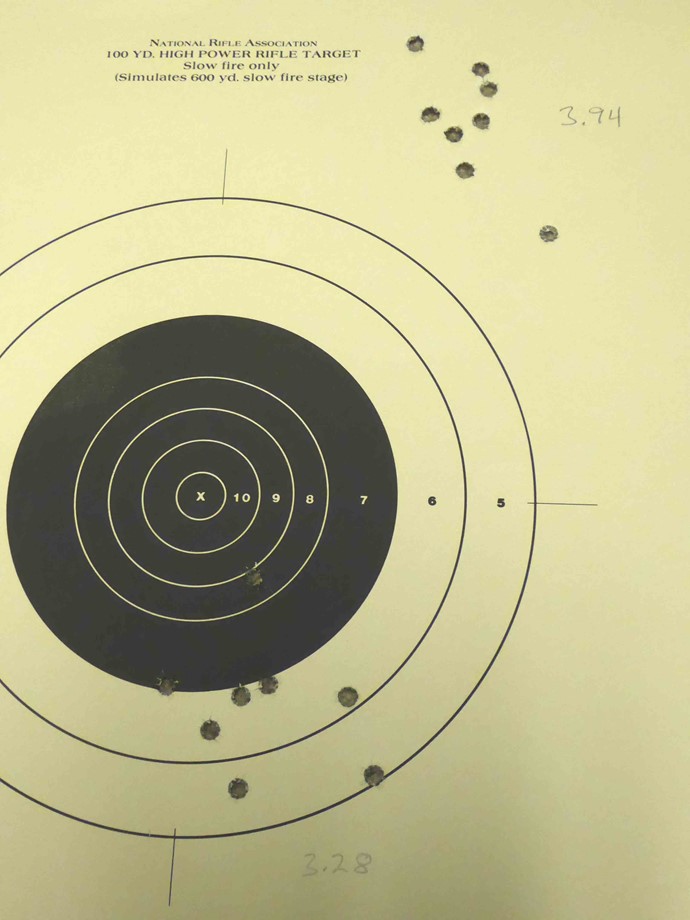 Considerably better, but still a preponderance of vertical in the groups.  As one more test, I think I will put some cardboard shims between the trigger housing and the bottom of the stock to see if that makes any difference.  Yes, I know this is not allowed in "issue" matches, it'll only be a test.

Update on the above posts, poor groups were due to poor bullet fit.  Pretty simple.

Since it was clear the 314299 had much better fit, i.e., lots of engraving with that big fat .303" nose, I decided to work with it for a while.  As a matter of fact, the nose hits the origin of the rifling before the bullet body can hit the throat, so it doesn't really matter what size the body is, the maximum OAL is the same.  So next time out I loaded the 314299 with the following loads:

All loads cycled 100% and the accuracy of most of them was quite acceptable.  The bullets were quenched from the mould and were probably about 18 BHN.  I really like this bullet in the M-39 Finnish Nagant, but in the M1 it is too long to leave room in the neck for a poly wad.  I find the poly wads to be a great help in keeping the bore clean in rough bores (like this one) or in loads "on the edge."  A 3/4-1 gr. tuft of Dacron was used in these loads.  The slow powders, RL-19 and H4831 SC leave a lot of unburned powder in the chamber, which did not impede chambering, but did dent the cases quite a bit! 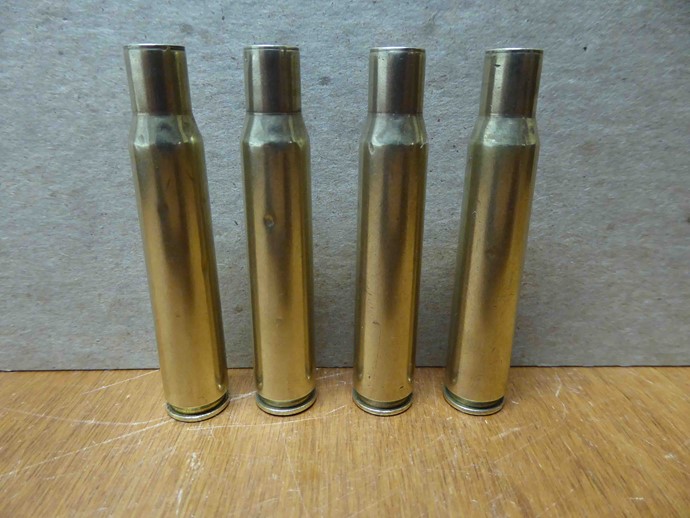 You can see I'm applying a light crimp with the Lee Factory Crimp die.

I have found that any cast bullet in the 170-180 gr range will shoot well in my Garand.

They shoot pretty much to the same point of aim.

When I still had a Garand used the RCBS 165 SIL and IIRC 34 grs of IMR 4064.  Reliable function and grouped as well as M72 Match ammo, maybe a hair better.