I now own a bottom pour pot, I am a independent caster now.

My wife gave me my birthday present two months and 3 days early, a used Lyman Mag 25 bottom pour pot.  I tapped a dowel rod to the lift handle , the other end of the dowel sits on the top of my shoe. I can now cast on my own. Though my wife and I will still do cast date night using open pot here and their.

Compared to the results of what my wife and I get using the open pot, the results of my first six hour solo cast session with this bottom pour pot was disappointing.

Doing the force feed like I am use to with the open pot yielded nice bullets but the area around the lead nipple kept getting filled with over pour and cooling down the nipple and stooping the lead flow. So I watched a YouTube video that talked about free fall flow. I tried that method for almost five hours and could not get the base of the bullets to fill out.

I am using Lyman #2 alloy and have the pot set to 750 deg  I used the following moulds today. I warmed the mould on a hot plate to get them to temp first.

RCBS 308-165-SIL  forced feed excellent bullets but could only fill front cavity of the 2 cav mould. Same with free fall.

RCBS 6.5--140-SILH Forced feed excellent results. Gravity feed Occasional good results. But I could not figure out what I was doing differently.

RCBS-257-120-SP new mould did temp break in like NOE recommends. Used mould for at end of casting sesion.. Gravity feed no luck.

RCBS-257-120-SP used mould forced feed good and better results of gravity feed on all of the moulds today.

Lyman 375449 new mould did temp break in like NOE recommends. Forced feed and gravity feed proved a problem with this mould. It is a big 375 cal bullet for the 38-55WCF

Lyman 257420 new mould did temp break in like NOE recommends. It casted real good bullets with forced feed but I could only used 1 cavity of the two. Gravity feed at least filled out the bullet but the base was incomplete.

Lyman 266673 new mould did temp break in like NOE recommends. Wash the mould first and dry then I do those three heat and let it cool rotations I have the mould closed and sprue in casting position. For some reason this mould was the devil to open after its third cool down so I could suit it and then use it. Once I got it open I could not get it to close with out leaving a line of day light between both half. I get to call Lyman about it.

I got a lot of learning to do with this bottom pour pot, but I do not have to wait for my wife to have time to cast now to get cast bullets casted. I casted for the five hours and did not burn my self with lead at all.

I tried finding a video of the gravity pour method up close showing nipple and mould opening in progress. One problem I do think I was having is my sprue puddle while present ( i could see the lead being sucked in as sprue condensed to solid) might not have been tall enough. But when I let the stream pore on the mould it would just sail over the moulds edge, leaving the same size in height sprue puddle.

as early birthday presents go, this is the best.

Sometimes the sprue plate can be too tight causing bases not to fill out. You can also turn up the flow. I normally have about a 1/4 inch gap between spout tip to top of sprue plate. Bottom pour is tricky sometimes. 700 degrees should be plenty.

One item is to use a flow rate that is just at the point of streaming. Set the stream back to dribble (not stream) and then open until you have a full stream and only that far. You'll need to open more as the pot level drops. The other item is to open the mold hole slightly more to get more air out as the lead goes in.

I've tried the forced injection and had varying results as you have. It work best for me on gang molds making plenty of .44 or .45 caliber pistol bullets. The secret is to pull the mold immediately at fill and puddle only slightly. More of an art than a science.

On the mold that will not fully close, you may have to reset the alignment pins. I've done this on a new mold when the same phenomena occurred. I think the mold draws slightly as it normalizes and that makes the alignment pins either slightly off location or sitting too far out. Move them back slightly and see if light still comes through. If light does not come through, then you'll need to reseat them.

Resetting can be done by sound. Drive each one back in with light taps until you hear a slight change in the sound. Drive one in until this sound change happens, then drive the other, then back and forth until they sound the same and are seated.

I was able to verify that the used Lyman BPP temperature panel is correct, or that my Lyman portable lead thermometer is wrong. I used a paper clip folded open and held by pliers and inserted into nipple once pot was up to 750 deg to make sure no crude in it. I loosened the tension on the sprue plate, it now swings over on its own when cold when mould is turned to the side. I also speed up my casting speed ( I thought one had to wait a minute before breaking the sprue over ) at the end of three hrs of casting the RCBS 6.5-140-SIL bullet I had a few with frosty mid sections on one side. But I had started to get lead smear on top of mould before that point so I slowed my pace down. I made sure I had no more then 1/4" distance from lead nozzle to mould top. I still could only use 1 of the cavity's of the 2 cavity's in the mould. The second cavity never did give me a filled bullet, I decided to concentrate on getting the one cavity cast as good as possible since time was short.

The base and band of the bullets doing the gravity fill were filled out and a lot of them did have sharp edges. I kept getting the little bubble in the base of my casted bullet still. I sent a picture to Ken Campbell . Mini bubble ratio was 71 per 100 of the bullets with sharp edges on base and lube band. I was able to give my son 29ct 6.5cal 140gr SIL  excellent casted cast bullets for his birthday yesterday 02=26-2021

On the Lyman mould that would not close. My gun smith found a tinny burr in the rim of the hole that he removed and now the mould closes perfectly. I will re wash the mould in hit soap water and rinse in boiling water. And then get it ready to cast it for its 150gr 6.5 cal bullet.  Hopefully the mould still closes properly once up to working temps.

Thank you for the inputs in thread and in PM's

Here is the answer to all of your bullet casting problems. Last winter my 17 year old grandson had been wanting to learn how to cast bullets. He and his little sister came over one Sunday afternoon and while the Grand daughter helped her Nonnie around the house my Grandson and I went to the shop, to do manly things, like teaching him how to cast bullets. He watched me for a while and then I turned the casting over to him and after watching and making a few suggestions, I left him on his own and started powder coating bullets.

He was using three different molds, a .17 caliber, a .358 150 gr. and a 180 gr. 308. He had the hot plate and had learned how to keep his mold Temp. correct. He asked a question once in a while but mostly just kept casting. When it was time to go in and eat supper, we counted his bullets and examined them all for defects. He had cast between 450 and 500 bullets and in all of those we found only three rejects. No frosted ,round driving bad edges, no incomplete bullets, no faults at all other than the three bullets mentioned. If you have ever cast .17  cal projectiles, especially the gas checked ones. you will understand how unusual that was. I guess it was just my excellent instruction, don't you think. I'm only joking, it was a major miracle, but evidently he has the natural born talent to cast bullets. The next Sunday afternoon I taught him how to reload and let him use some of the powder coated bullets that he had cast, and of course he was going to fire them in my favorite .357 Blackhawk that I had given him for a high school graduation present. Very proud of my grandson.

here are a couple pics of the " flaw " in the base of the bullet.

for plinking at 2 to 3 moa this would be a trivial thing ...

as i understand it, this occurs in more than one of his molds ... 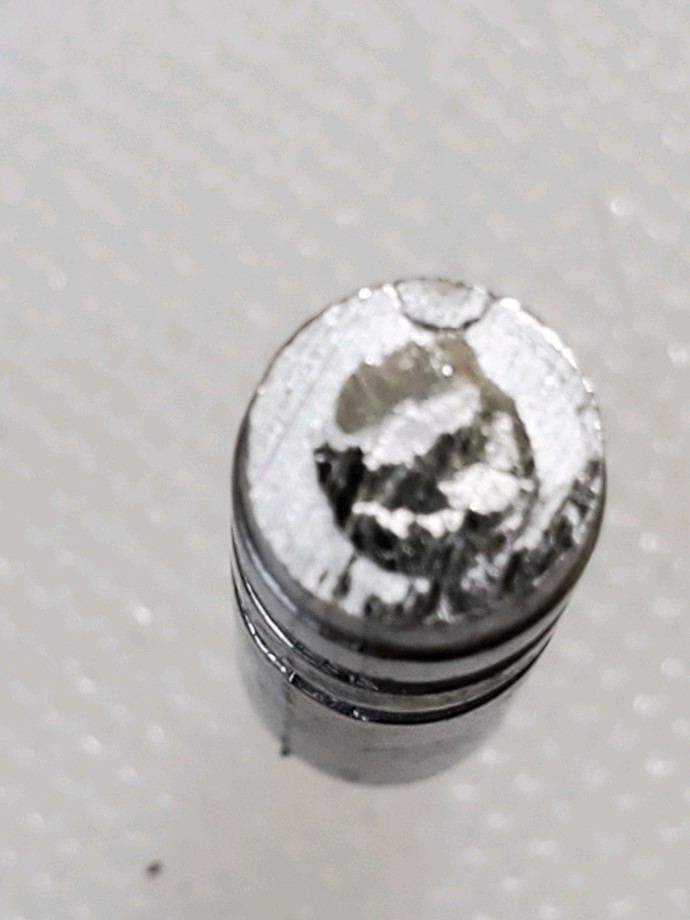 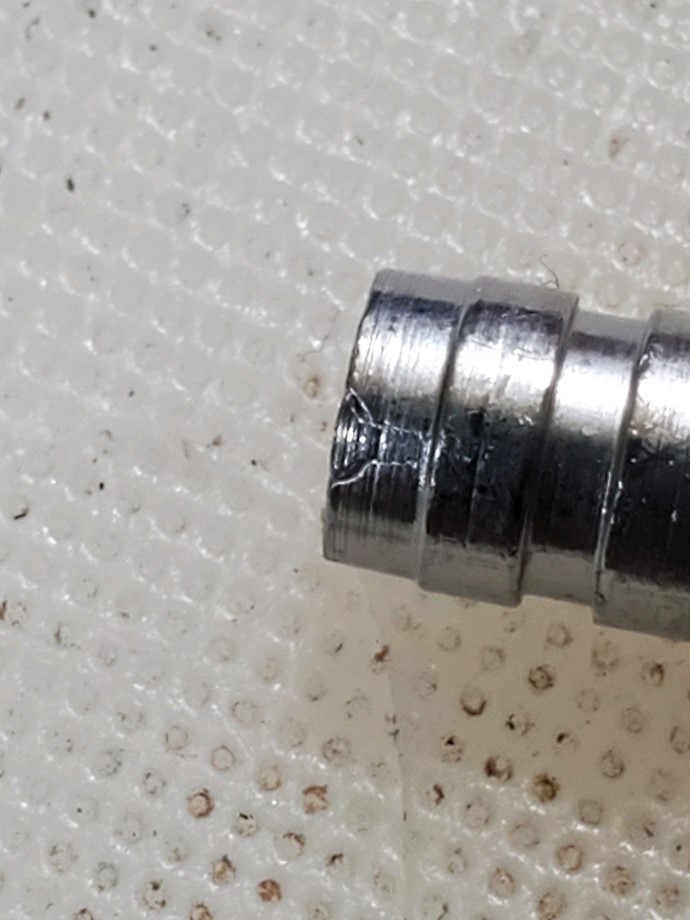 That little bubble in the corner happens on 44 cal and lower moulds. It happens on front or rear cavity depending on which I am using and on single cavity mould and has been chasing me ever since my wife and I started casting. It is always  at 4 to 5 o-clock .

That is because either your lead or mold is not hot enough, or maybe both.