How Do Choose What Powders To Start With?

On an earlier thread there was a good discussion on how to tune for accuracy.  The question was asked with the stipulation that you started with a predetermined mold and a predetermined powder.  What I'm asking is how do you narrow the field down to the two, three or four powders to start working up an accurate load with a given mold.

In the aforementioned thread Bud suggested:

I asked if I could start a thread following his perspective about using "prejudices" and he agreed.  A few other folks suggested looking at match reports.

I don't have enough time in the saddle working on cast accuracy with any rifle so all I had was match results and the last two Lyman cast reloading manuals.  Specific to the match results i took a look at the CBA's 2021 Nationals and I thought it might help the conversation.

My observation is that if you were running the same mold that the top 1st or second place finisher used there (not a bad place to start) you would have a better chance of using the match data to help guide you.  But with the large number of variables found in cast benchrest (cartridge, mold, bullet weight, powder) there's a case that can be made for personal prejudices or as some call it "experience".

Just my two cents.  As I've said in the past, every day i finding gold nuggets of knowledge laying all over my reloading bench, at the range and on this forum.  I'm pretty sure that cast accuracy is something that will keep me busy the rest of my life. 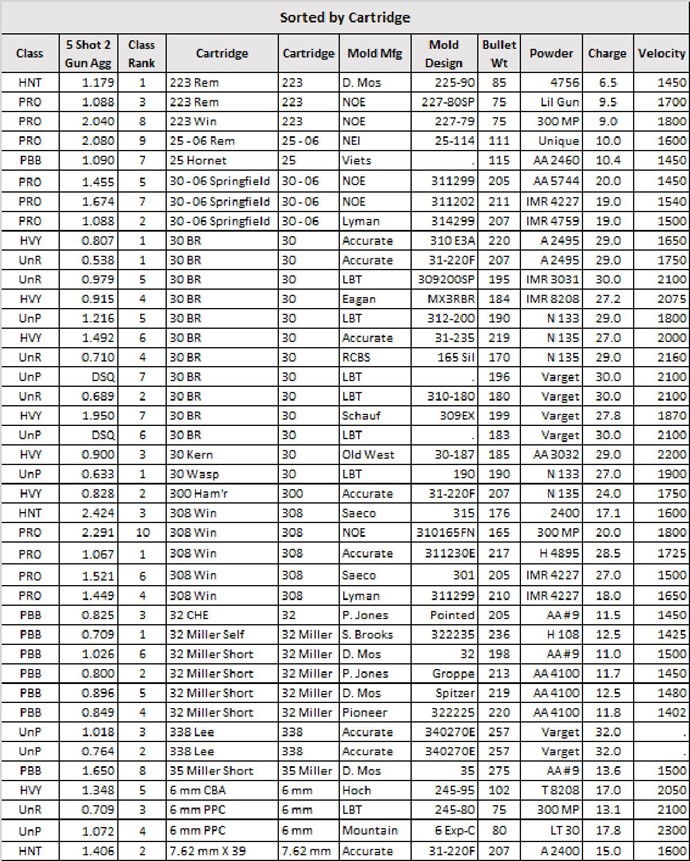 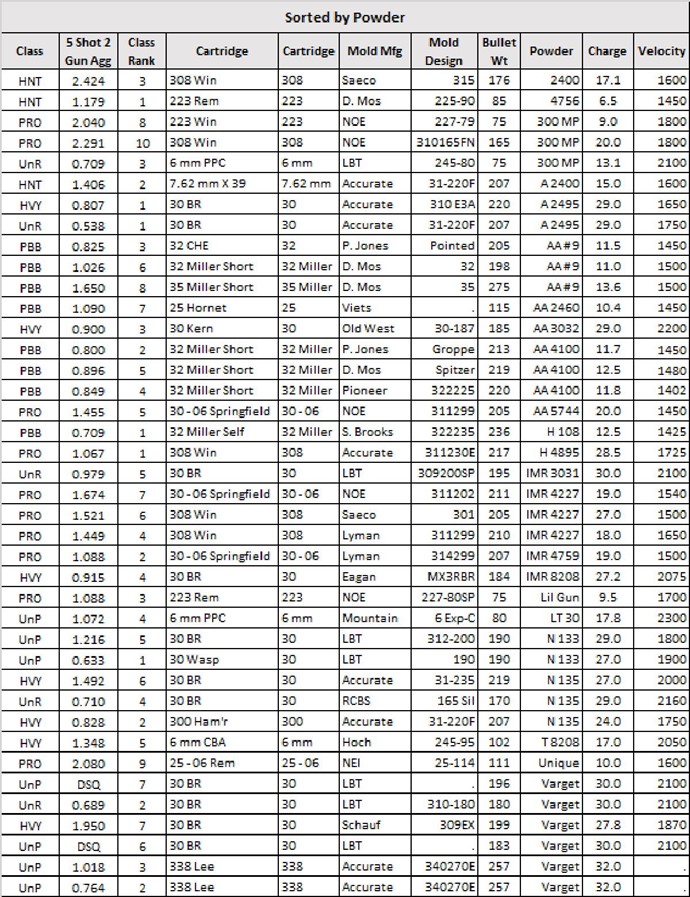 I simply use the loading manual to see what powders are listed and use one that I have on-hand. If I have the one listed as "most accurate", that is where I start. Simple but effective. Problem now is getting powders that are listed! Having multiple load manuals is beneficial since Hercules powders are not listed in the Accurate Manual or similar situation with other manufacturers.

What I do is look at the manual and see what powders are listed and then see what I have and then load 5 of each that I have that is listed and see what one group the best and then work with that one powder and have what I looking for after. It works for me .

It seems to me that the data from the CBA nationals are hitting us over the head with the fact that as far as powder selection is concerned, as with most things, there is more than one way to skin a cat. For any one pressure area that you might be trying to achieve there are probably half a dozen powders that will work just fine. Otherwise how could we have the variety you see above?

I think this is part of a bigger picture. If you hear someone say they have a rifle that only likes one powder, or exactly 17. 6 grains of powder (and both 17 and 18 produce much bigger groups) or that only Federal primers will do, you can bet that that opinion was arrived at by looking at a string of 5 or 10 shot groups and picking the best without going back and confirming that decision by firing more groups in a head to head test to see if that one group was telling the truth.  It may be a good idea to read the article "More on Tuning" in Fouling Shot 275 and think about what it might take to reasonable confirm the first rough try at powder selection that indicated that one powder is better than all others with similar burn rates. Such extra shooting has made me more humble about having the very "best" powder for the job.

Standard Member
Spindrift posted this 21 May 2022

Living in Norway, I mostly use european powders; Vihtavuori, Norma and Vectan, mainly.

If I want to assess the accuracy potential in a lubed, gas checked .30 cal bullet in the .308 or .30-06, my go-to powder is Vihtavuori N110 in the 17- 19grs range. This powder requires no powder positioning agent, or filler.

CBA Member
delmarskid posted this 21 May 2022

I try to find a balance of charge volume, velocity, pressure, and alloy strength as well as cost and availability.

I once did as much research as possible and tested many powders to come up with a good load.  Today in the 21st century America I just see if I have anything that will work.  Powder choice doesn't seem to be an option any more!

I went back and looked at last years National's results and drilled down to class, cartridge and aggregates for 5 shot groups in 100/200 yards.  The best aggregates of the match were shot by Unlimited Rifle and Heavy class with PBB close behind.

The three best aggregates in Unrestricted Rifle were shot with the 30BR.  The aggregates ran from .538 to .710 which is +/- .088.  In the Heavy class using the same 30BR the two best shooters had aggregates of .807 and .915 for a +/- .054.  Some shooters, and I would be one of them, would draw the conclusion that although powder is important, match level cast accuracy can be achieved with more than one powder.

I think J. Alexander's work with brass that was in the last FS put a cabatch to being able to blame case capacity as a villain.  You could extrapolate and also say that case capacity doesn't effect pressure but that's not a given.  Maybe Larry you chime in on that.  Now couple that with the thought there's more than one powder that will give you match accuracy and another big excuse bites the dust.

As was said earlier, if its a given that match capable reloading, bench equipment and practices are used It pretty much narrows it down to bullet fit and having the ability to cast match grade bullets.  Or am I simplifying this more than I should?  Thanks for letting me sort this out in my head and feel free to take shots at what I'm thinking. Bill.

If all the powder on your shelf disappeared tonight and tomorrow you were allowed only four jugs of any powder of your choosing, what powders would you choose and what cartridges would they be for.

Assume whatever powder you wanted was on the shelf.  Thanks, Bill.

Since I shoot a lot of pistol, #1 would be a fast pistol powder. I have burned  many kegs of Bullseye, but TiteGroup is also good.

A slower pistol powder would be #2, Power Pistol would be my choice.

I first check a loading manual and try a few. then i look at a large cross section of TFS published match reports, spanning years and matches everywhere. This usually gives me a general idea where to start. Honestly there are so many variables besides powder, the shooter being the biggest IMHO that a variety of powders will usually work. I look back to what my current heavy rifle did when my Dad was alive and shooting it. I have found what worked for him has not always worked for me.

My current project is a Ruger Hawkeye in .308 Win. 22 gr. of 4198 pushing an RCBS 30-180-SP bullet does reasonable for a hunter rifle. Not exactly a match winner but it's competitive. That load came from extrapolation of TFS match data.

Answer to your second question would be Unique or 4198.

I agree that there are variables more important than powder.  I'm coming around to the bullet fit to throat, bore and the actual bullet design as the number one importance.

But for new cast shooters you have to start somewhere.  I shot a lot of cast before I got serious about accuracy.  I took it seriously last year when I started working with a new 308 Savage.  At the time the only guide I had was the Lyman cast manuals.  In total I shot 10 of the 18 powders that had suggested load data.  All were shot scanning for accuracy.  With each I started by shooting a couple groups from the low end of the recommendations and then worked up the necessary charge to find the velocity that I was looking for (~1680 to 1780).

As incredible as it sounds I had put over 500 rounds through the barrel to learn what I know today.  Could I do it better now?  Certainly.  Given the same 308 cartridge in a new production rifle I think I could get a load as good as the rifle is capable of shooting in less than 100 rounds.

That why I was hoping some of the experienced shooters on the site would offer up some suggestions for what their go to powder was for different applications.  Maybe that request is too close to being "secret inside information" or maybe the request is so vague that they know that six or eight powders could work in many situations.

So the personal experience that you earned by years of handloading has everything to do with what powders you start with when working up a load for a new rifle.  I asked about picking four powders to live with hoping to hear suggestions (not guarantees, suggestions) where some may start, be it a 38 special, 32 Miller or a 45-70.

For me, narrowing it down to 4 was tougher than I thought so I stretched it out to 5.  All for cast bullets and to be honest none are high velocity.  All I shoot is 800 to 1900 fps.  And all I shoot is long gun so this is distorted, but here goes:

And its funny how some super popular powders just don't become important for some loaders.  I've had Reloader 7 and 4895 on my shelf for decades but never thought of it as a go to powder.  That said the 4895 shot lights out with the 223 Remington jacketed.  I need to keep trying 4895.  Thanks, Bill Cook.

"Accuracy" loads in manuals are based on lowest velocity variation in the test barrel. They did not shoot the loads at a target. Mostly useless.

Powders used in a cartridge the same size as yours in the CBA matches are a good bet for cast loads.

Powder is a small part of the accuracy equation, a lot smaller than most shooters think.

These days I am mostly shooting plsin-based rifle bullets at no more than 200 yards. In revolvers I am shooting standard weight for the caliber at subsonic velocity. The great majority of my recreational loads are assembled with Bullseye, 452AA, WST in .38 Special, .45 Colt, .45 ACP, .44-40, .44 Magnum and .30-'06. Rifle loads approximate .32-40 Winchester. Handgun loads all approximate factory velocity for the caliber and remain subsonic in the Cowboy rifles. Giorgio's loads in Italy follow the same formula substituting common and affordable Euro shotgun powders.

I use very few full-charge loads with gaschecked bullets.

CBA Member
giorgio the slim one posted this 31 May 2022

Happily  following  this beaten trail , in all my fun shooting , since I am no more boar hunting .

I read D Reiss’s thread “ SR4759 Comeback needs help!” With a lot of interest. Yep, I realize there is no miracle powder out there (exception being V133 for jacketed Benchrest competition). But having a powder resurrected because it performed well in the past brings out the optimism in most of us and I would like to give it a whirl. One of the responders compared it to a couple of other powders in that burn range.

There’s always something to look forward to isn’t there.

Ps: It wasn’t fair to a lot of good cast bullet powders by calling V133 a miracle powder. Jacketed BR shooters are shooting bullets that are very very similar and their bought by the 5,000, 10,000 quantity so their shooting the same custom bullet through their next 10 to 20 barrels. But you got to admit; it’s one “he-double hockey stick” of a powder for jacketed BR shooters.