Are you REALLY bored with being locked in the house ? Here's one cure. Truth be told I borrowed this from a gentleman named Larry Gibson on that other cast bullet website. Many want to shoot cast bullets in old rifles that only Berdan primed brass is to be found.

My situation is different. I bought 5000 rounds of RWS German mil-spec 7.62x51. Great ammo, beautiful annealed cases but fitted with a crimped in and lacquered in Berdan primer. Crimped and lacquered is a pain for normal reloading but facilitates the conversion.

Here are the steps: (fired cases ONLY)

2. Drill through the primer and the Berdan anvil to form a new flash hole. I used a a 2.3 mm drill bit.

3, CAREFULLY drill through just the bottom of the cup with a #45 drill. You want to leave the sides of the cup and the Berdan anvil in place.

4. Take your primer pocket swaging tool (mine is RCBS) and swage the pocket with the SMALL punch.

5. You have swaged what's left of the old primer to form a small primer cup.

Now you can reload the case with regular dies using small rifle primers. As noted earlier have the Berdan primer both crimped and lacquered removes any concern abot the new "pocket" from coming loose.

I have lots of cases and free time ! 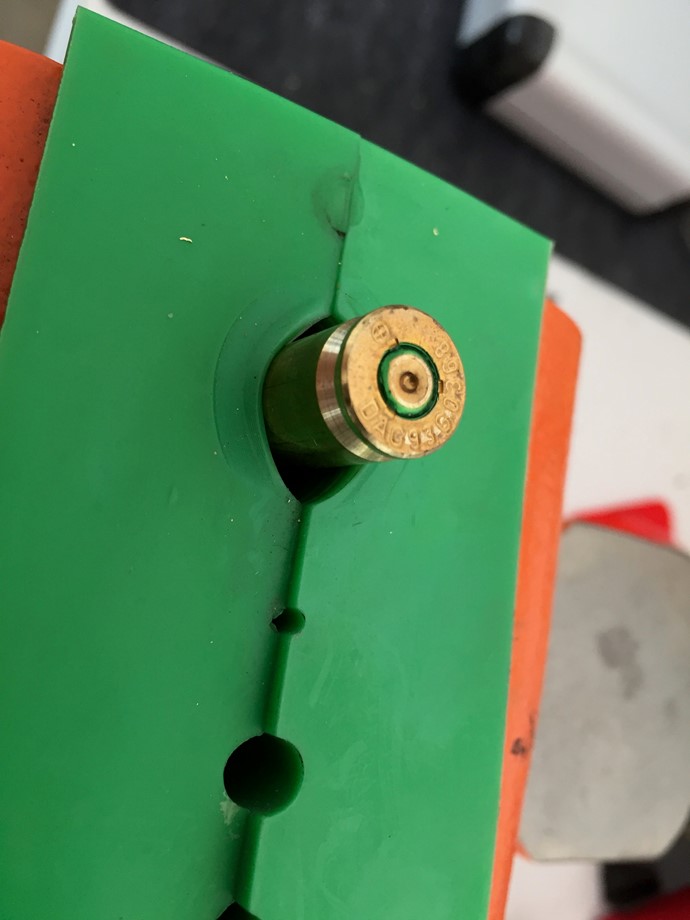 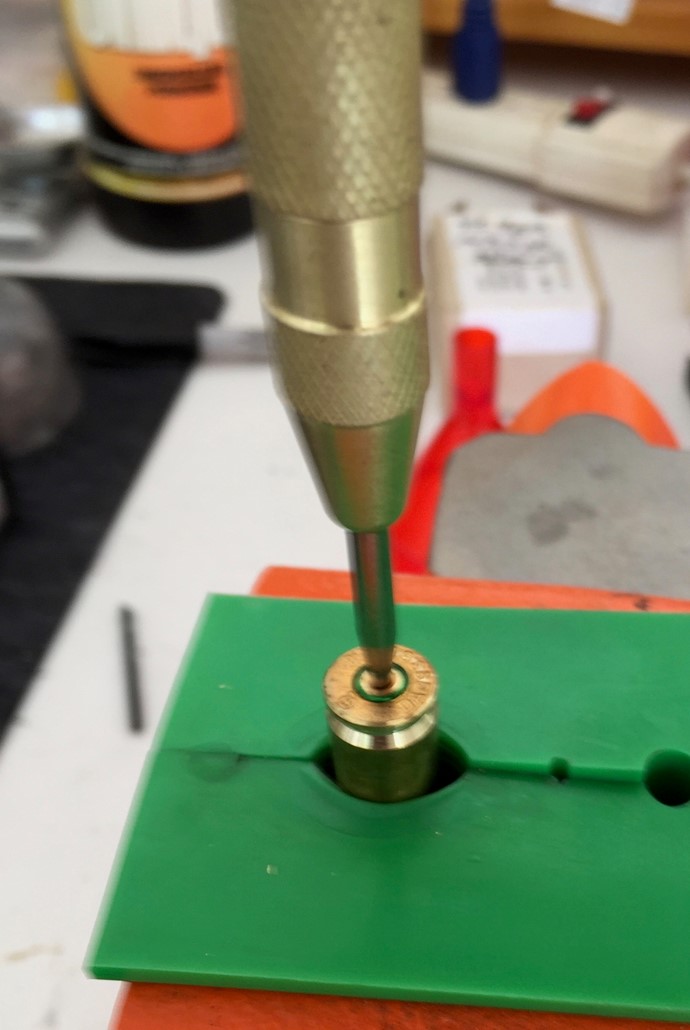 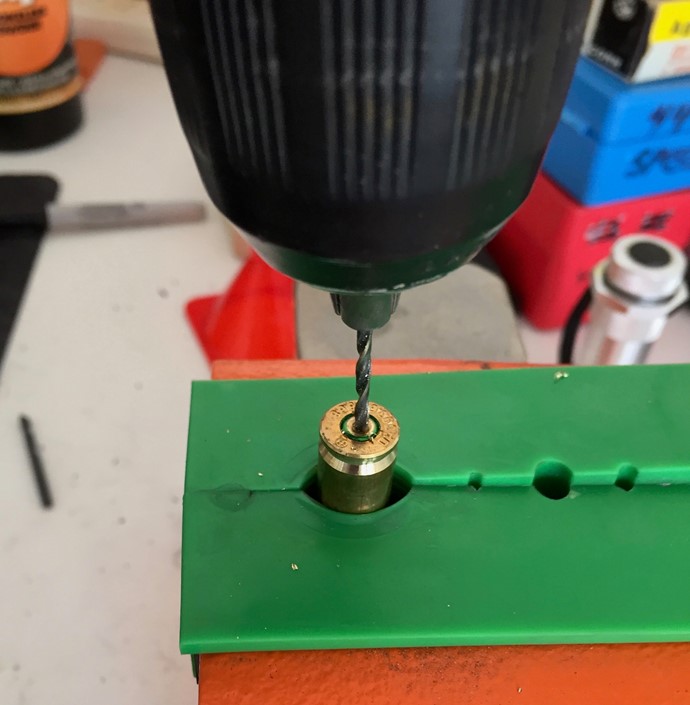 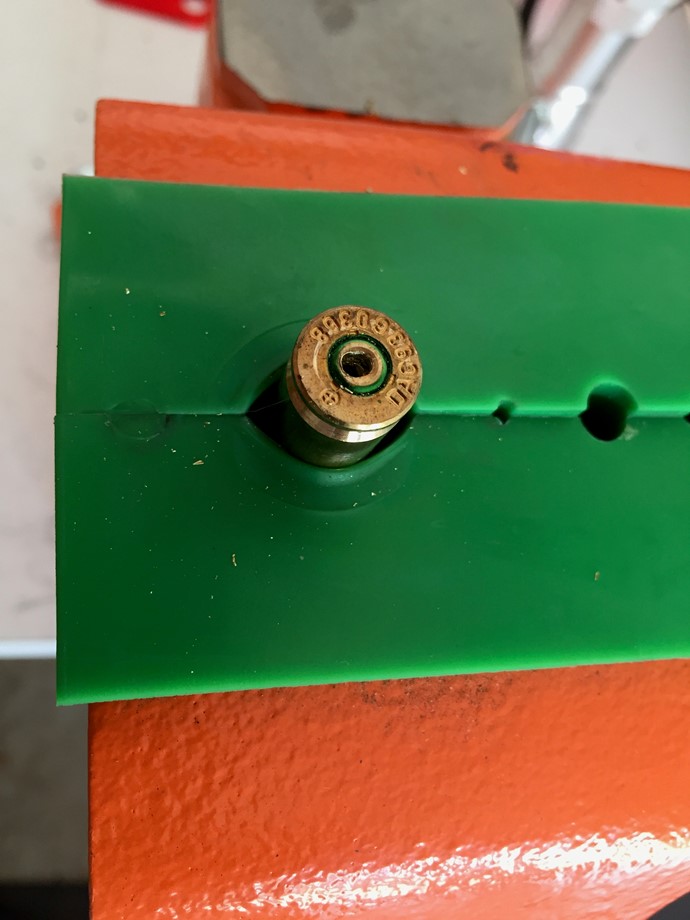 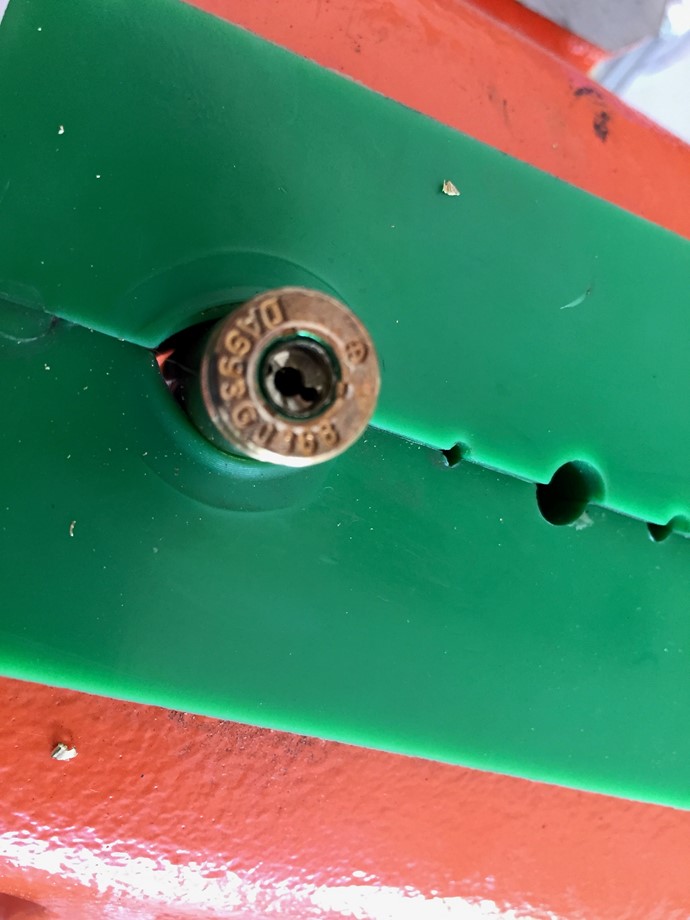 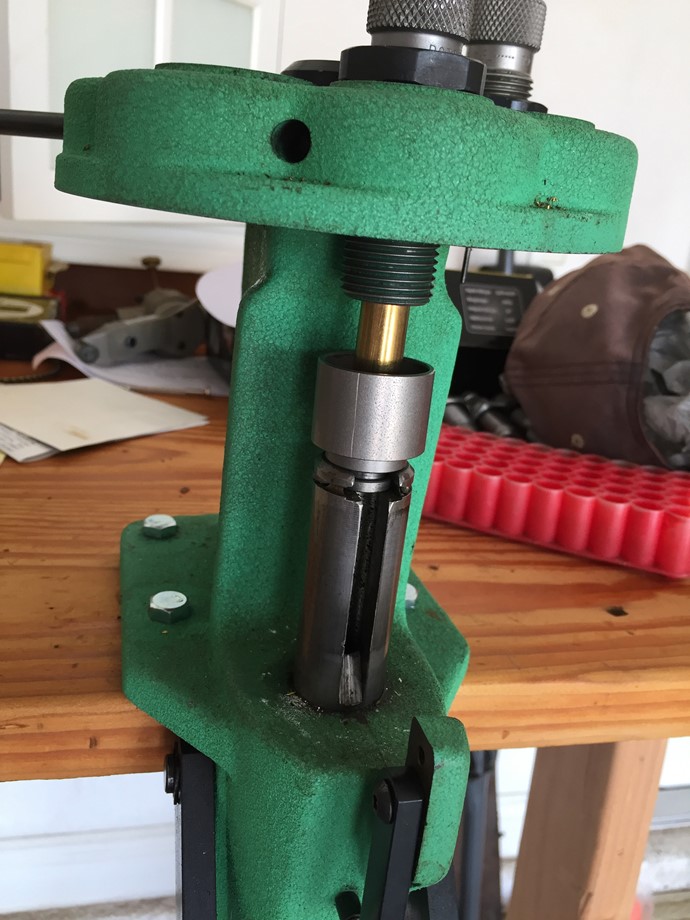 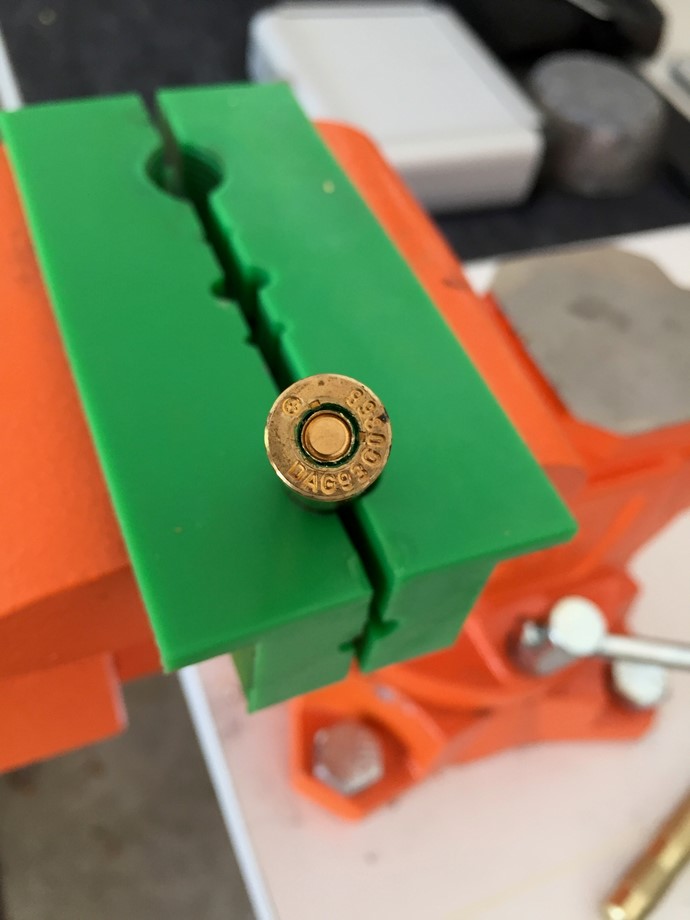 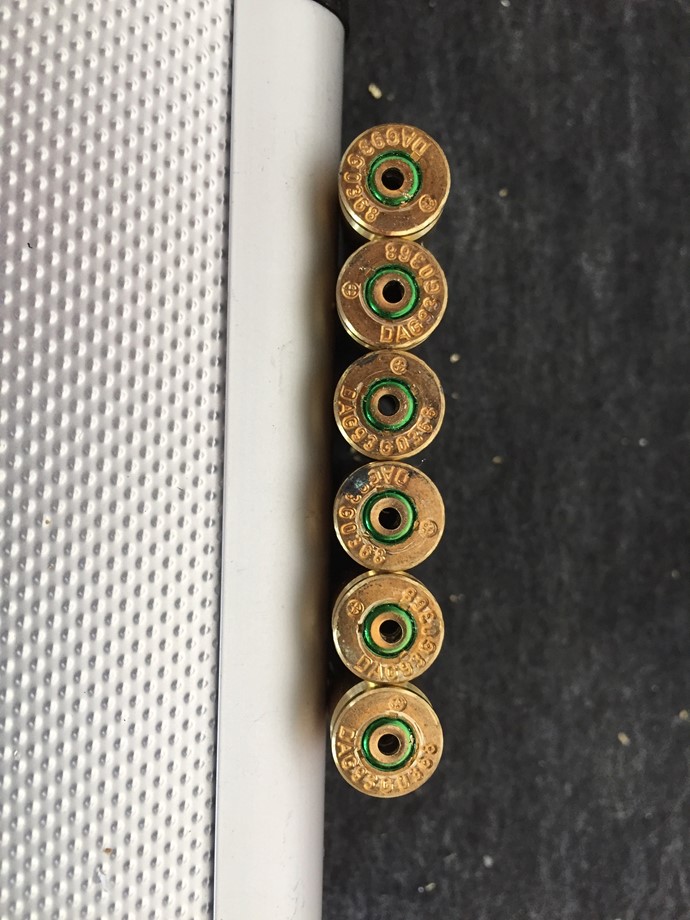 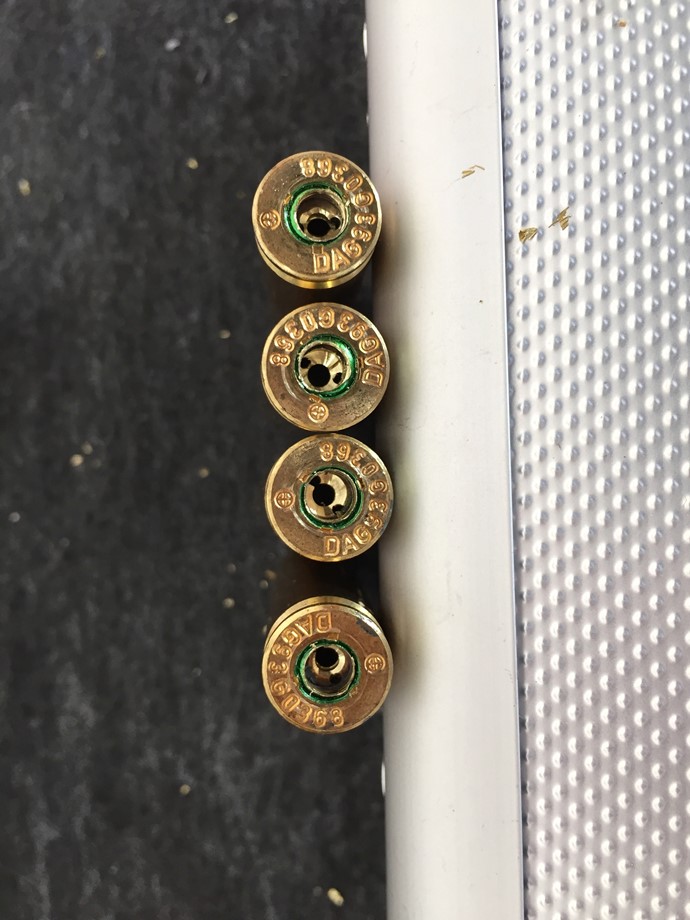 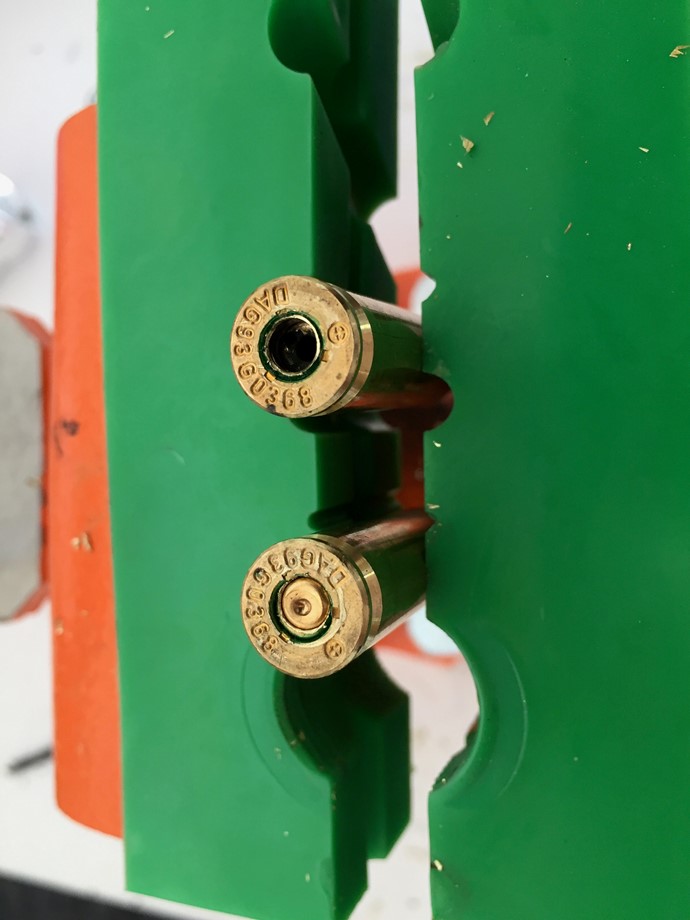 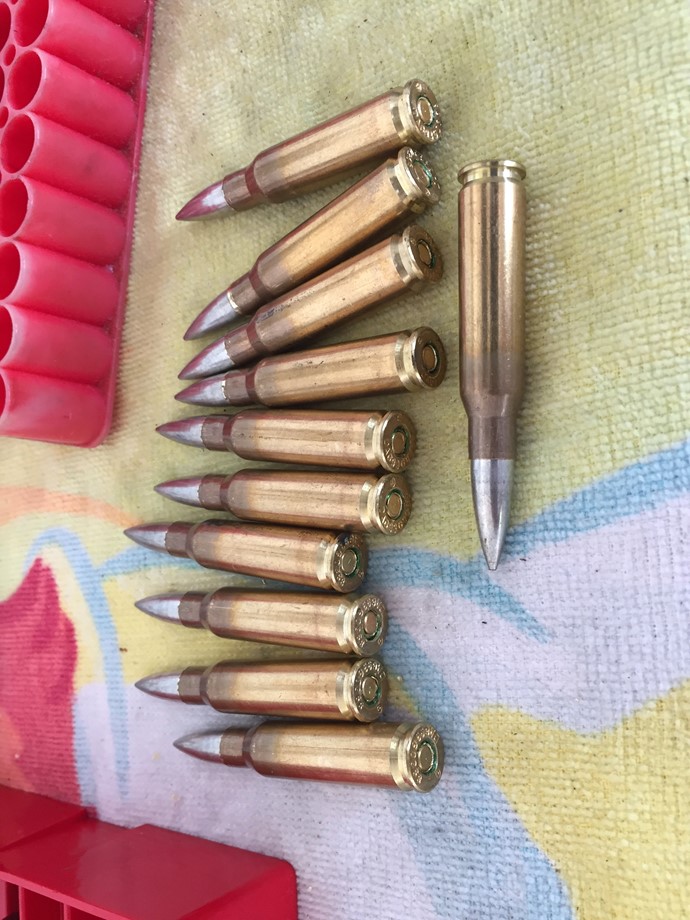 That is using the old noodle.

Much better than converting to shotgun primers that only work for black powder pressure levels!

And now I see 6.55x55 wooden blanks for $16.00/box. Pull the wood, dump the powder, reload them and shoot with Berdans and then convert to Boxer.

Is there anything to be concerned about in regards to ending up with three flash holes vs one? I wouldn't think so but I'm curious.

"Well hell boys. I'd damn sight rather be hung by my friends than by a bunch'a damn strangers."

Start at the bottom of the recommended powder charge and work up. Be careful of the pressure signs as you increase. All loads are relative to the firearm chamber and powder combinations. Many cases enlarge the primer holes with repeated firings.

A friend in my Illinois days shot a slightly reduced load in his M1 Garand that reliably operated the action. He got 20 reloads per case. His flashholes were visibly enlarged by the fifteenth or so loading.

If you are shooting cast, you will not get too high on pressure. Work up your load and check each time for wear.

I have shot well over 100 loads in a single shot, using the same single case with 4227, a wad and breech seated cast bullets. No flash hole problems observed.

On my Berdan modified cases, I trash them after 8 reloads of normal jacketed bullet loads. 3 flasholes makes no difference. With light cast loads, they last forever as Mil-Spec 7.62x51 cases are very rugged.

I like the idea good to know but not that desperate

I have used this method to convert numerous different Berdan primed cartridges to take Boxer primers.  Most will work fine using SR primers and a couple worked with LR primers.

I have used converted cases in 303 British and 7.62x54R with full power jacketed loads w/o problems.  Measured pressure remained consistent as with the same load in factory boxer primed cases.  The size of the flash hole(s) has no affect on the pressure.  I have posted on this forum an extensive test in the 308W proving such. 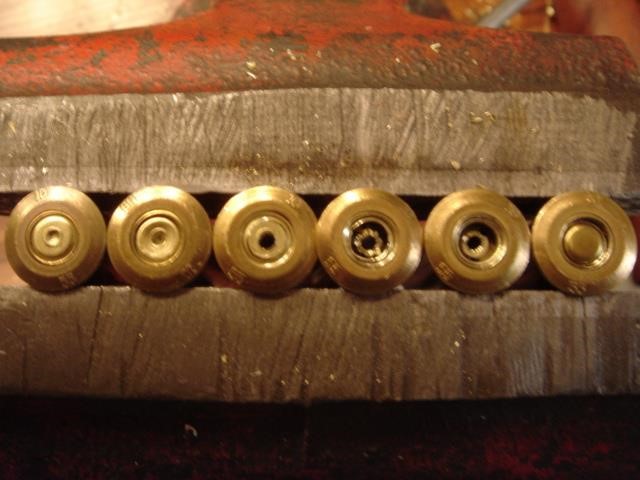 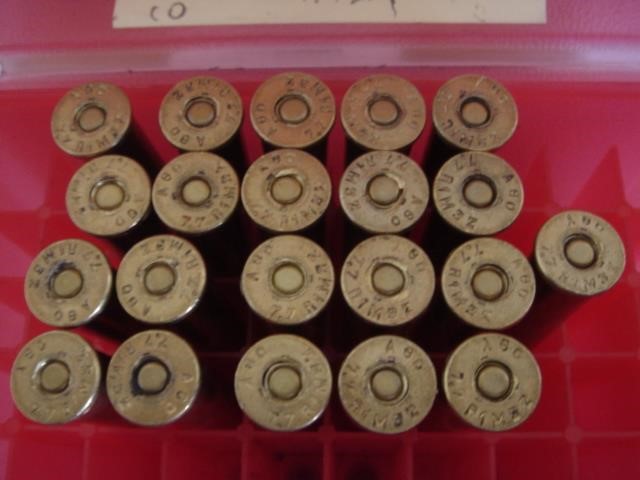 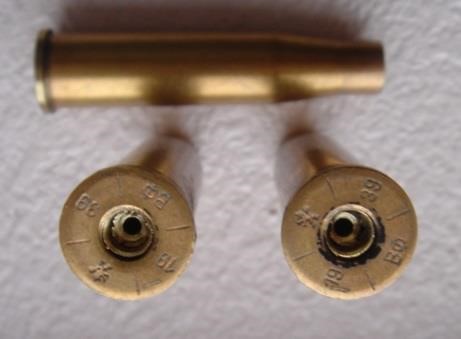 Thanks for all the info on this, good to know.

"Well hell boys. I'd damn sight rather be hung by my friends than by a bunch'a damn strangers."

Larry G is of course correct. I read about his method on that other cast bullet website and adapted it to my needs.

All the "nay sayers" have never tried it.

I am not a nay sayer but my results were spotty at best. I followed essentially the same procedure to alter 577-450 brass but had many leakers and the rings came out at decapping. It was more of a PITA than it was worth with that lot. I ended up converting them to 209's anyway. Thanks, Squid

Well no idea what your problem was but if it works for Wilson and me in much higher pressure cartridges, it;s the execution not the theory that failed. 577-450 operates at much lower pressures and has a huge sloppy firing pin. 209s are probably a better idea.

Kynock brass is of such poor quality, I vote for the 209 primers every time.

Well, I rather doubt it was execution, I have been at this for a very long time but anything is possible. Perhaps the very old Berdans being copper and not brass may have been part of it but a huge and sloppy firing pin is not part of the equation either having been reduced and bushed by me long ago. This is not your regular Zulu rifle. I merely wanted to point out that sometimes your mileage may vary  as it does in nearly every instance. Thanks, Squid Boy