Adding metal to the pot during casting 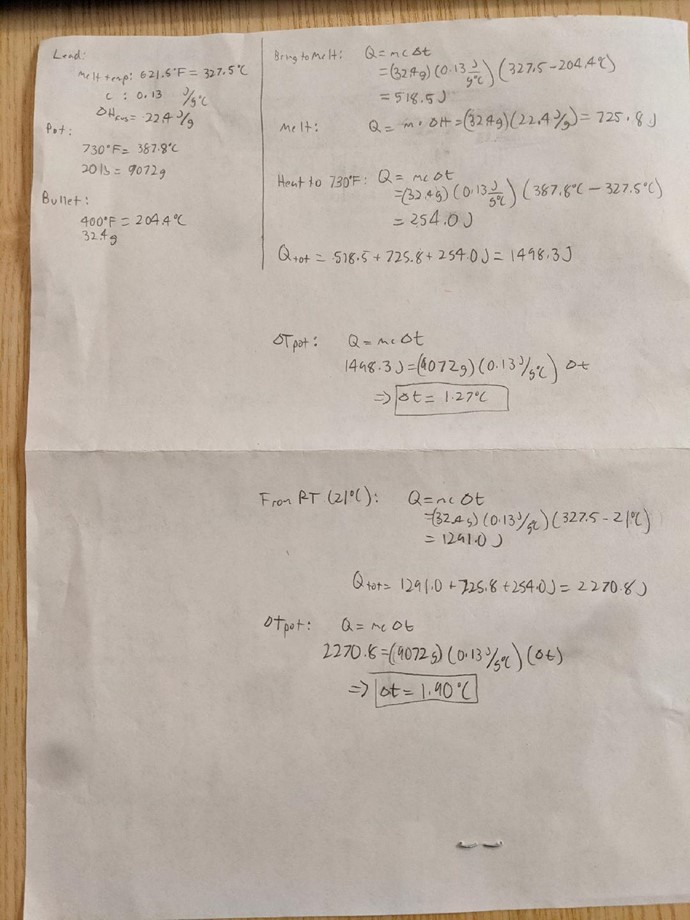 I’ve seen posts occasionally about temperature variation caused by adding sprues and reject bullets back to the pot during casting. The variation I see on my PID set-up with a 20-pound pot appears small but the issue did make me curious as to what the effect on lowering the pot temperature really was. I asked an engineer with thermodynamics expertise to do the calculation using 20 pounds (9072 grams) alloy in a pot at 730°F (387.8°C) and 500 grain (32.4 gram) bullets, one at 70°F (21°C) and one at 400°F (204.4°C). My routine, which only takes a few seconds is to drop the sprue back in the pot from the cut so it is still hot, drop the bullet on a towel, roll it looking for defects, check the base and either keep it or drop it back in the pot.

The bottom line is that putting a cold bullet back in the pot drops the temperature 3.42°F. A bullet cooled to 400°F only drops the melt 2.29°F. So if you want to maintain a temperature ±10°F and your PID is holding the pot at ±3°F then one bullet and sprue will not be a problem. Hopefully your bullet quality is high enough that you don’t have to consider this often. You can extrapolate from these numbers for multiple bullets, a smaller or larger pot with different weight bullets.  labop

Standard Member
LeadSmith posted this 06 May 2021

I just recently purchased a pot with a PID controller. I haven't used it a great deal, but I purchased it with the intention of keeping temeratures as consistent as possible. It does a great job of that.

I don't put anything back in the pot once I start casting. I don't add anything to the pot until I'm ready to top it back off.

The PID sure is nice

Nice to see an analytical attempt to answer the question of how much will the pot temperature change when throwing a bullet back in. Something I wish we saw such approaches more often. I will admit that I couldn't follow the calculations with the amount of patience available, so I did the calculations independently using the assumption that the energy in the pot and bullet before would equal the amount of energy in pot after the temperature stabilized.  For what it's worth, I got a decrease in pot temperature of 2.4F for the cold bullet and 1.2F for the hot bullet. The change for the cold bullet should be twice the change for the hot bullet since the temperature differential between bullet and pot is exactly twice. (Be glad to send my calculations if you are interested.) Either way it shows that it isn't enough to worry about.

I have a PID on my melting pot and it's kinda nifty to have the temperature stay so uniform, but I don't think that does a thing for the quality of bullets.  It just makes us feel like it outa.

Several years ago after fretting how much my Lyman pot let the temperature fluctuate during a casting session,  I wrote Lyman, RCBS, and Lee and asked them how far apart were the points at which the thermostat turned their pot off and back on again.  I was surprised to not only get an answer from all three but also that all three set their pots to turn on and off 50 F apart.

So most of those CBA records of tiny groups and aggregates of groups that us normal mortals will probably never equal were mostly set before PIDs became the fad and pot temperatures  varied as much as 50 degrees in any lot of bullets.  Also Joe Brennan's study of groups at CBA national matches showed that we have not improved in this century and there were mighty few PIDs in use by CB shooters in the last century.

I know it seems like "common sense" that a constant pot temperature "ought to somehow improve" bullets.  But I have never seen any test whatsoever that even tried to prove that.  I'm pretty sure we can all relax about temperature variations.

CBA Member
RicinYakima posted this 07 May 2021

"I have a PID on my melting pot and it's kinda nifty to have the temperature stay so uniform, but I don't think that does a thing for the quality of bullets.  It just makes us feel like it outa."

No matter what the company says; My 20 pound Lee bottom pour would vary from 640 F to 910 F when set on the "7", the RCBS was better at 690 F to 750 F and the SAECO was better at 650 F to 700 F. Yes, I know the number on the dial doesn't really mean anything. The Lee about once an hour would turn on until the safety switch shut it off. It is amazing how blue lead is at 900 F. To be honest, the little Potter five pound pot with a constant 500 watts is very regular in temperature if you have a single cavity mould and have a constant process, dropping the sprue back in on every cast.

Because of my physical condition, I cast for the most bullets with the least reject rate. The PID does help with that once you find what that mould likes.

You are right, with a good uniform cadence the PID removes one variable.  A PID also lets you pick a number that is real (if the calibration is right) unlike the guess and adjust numbers on the dial of the pot.

Your Lee pot was obviously defective, Lee would have fixed. I have had three Lees and temperature fluctuations were "normal".

Wow. That's an awful lot of cyphering to quantify a few degrees of temperature swing. I'm duly impressed by the Engineers patience to sit down and write all that out. I normally don't add sprues back to the pot until it reaches a certain point, usually around 1/4 pot, then I perform my fluxing ritual and allow the pot to sit undisturbed for around 15 minutes of so to see if any fluxing debris like stray bits of tin oxides or dross float to the top.

Are you getting more consistent weights and diameters?

CBA Member
RicinYakima posted this 09 May 2021

Ross, I never worried about diameter because I size and taper size the nose/front band. Weight is a little better, but not significant. What it does for me is reduce visual rejects from rounded bands on the low temperature side. I count my reject rate as important as I can't cast long periods.

I cast for almost 40 years before getting a thermometer. Bought the Lyman digital. And a month ago bought a large face analog off Amazon.

Been using the thermometer/s now for awhile and they are nice. Just sayin,a cpl casts ago the battery died in the digital and was too lazy to go get another out of inventory. So ran the cast "blind",old habits aren't always bad.

There was zero problems with the cast without the thermometer. Casting cadence,and knowing when to take a break dumping sprues and fluxing,along with puddle size and drop height,is what makes or breaks great quality bullets for me.

I do like the "big screen" analog thermometer. It's interesting to see the interplay between, the pot cycles.... the quickness of the digital... and the slowness of the analog.

Standard Member
gunarea posted this 09 May 2021

Nice to see another nerd involved in the nuances seeking perfection. My study began fifty years ago with help from some very intelligent fellow nerds. Although maintaining consistent projectile weight was the primary concern, fluctuation of reservoir temps was but a single component. Measuring the pot material temps became much more involved as there are "hot" and "cold" spots within the unit. Saeco and Spartan were the first to understand the value of insulation. Top and bottom temps hold differences. Even a PID controlled heating element gets only average data input from an isolated single area of the molten pool. Simply put, hottest area is next to the heat source and temps drop with proximity. Most melting equipment have surprising images of inconsistent temps when scanned with IR imagers. Regardless how consistent the liquid may or may not be, it is but a single component of hot lead to cold projectile process. Your calculations are interesting and effort applauded. Our approach was to engineer a solution to achieve empirical values equivalent to theoretical calculations. It was nerd heaven! Most of the group were not good enough to realize competitive gains. I still measure, maintain, monitor and chase the nerd dream. My shooting skill had to be improved to keep up with projectile quality. It is with great satisfaction to capture state titles in jacketed dominated disciplines, with home cast projectiles. The inspection boards see cast bullets and pass me through with a condescending sigh. 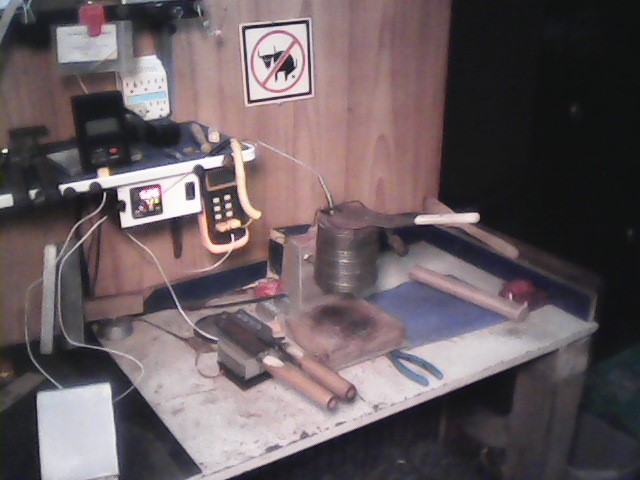 Nerdvanna. Seek on my fellow.