Your Favorite Reduced Loads for .45-70

I have looked over the Lyman manual and the Lever Guns Performance Studies table, but would like the benefit of your collective experience.

I have a modern High Wall.

Don't know if it qualifies as a reduced load, but def a mild load.  I use the Lee 405 HB bullet and 38.5 gr of IMR-3031.  Plenty accurate for deer, and has performed very well for that as long as you put it in the shoulder (don't lose any meat, as our Southern white tails are so small anyway).  And plenty light for paper punching.

My favorite for out to 100 yards.  I use 5gr. of Bullseye with an NOE collar button.  I size them .460 with SPG lube for my Trapdoor.  I put 1/4 sheet of single ply TP on top of the powder.  I just poke it in with the eraser end of a pencil.

I also load the .457" round balls I cast for my Ruger Old Army.  I lube them with Alox and seat them all the way down on top of the powder.  I use a dowel in my drill press for this.  It has a mark to show when the ball is seated on the powder.

I haven't used the round ball load as much now that I have a collar button mold.  You need to be careful.  These look like empty cases when you first see them.  They are also only good to about 25 yards with the big bore on my Trapdoor.

When I am practicing getting in and out of position with my High Wall I like to use 14gr. of Trail Boss over a 405gr. with HiTek coating.  That load lets me shoot out a bit farther.

10.5 grains of Unique with the bullet seated deep enough to allow a slight crimp into the leading edge of the body of the bullet.

I had five hundred bullets from the old Lyman mold that I initially totally filled with NRA ALOX lube. These were so smoky that I only shot them outdoors. I then gave a light pump on the lubrisizer that was successful.

Um..... The squares are small on the new rolls.   Do you think it will change POI?

Obviously, you have used this load a lot.

Have you experienced any difficult case extraction or signs of chamber ringing?

I hope I am not being insulting, but I am a newbie and need to ask these things.

I am probably going to make up some of these later today.

I’m happy with 12 grains of Unique with the old 300 grain 45/90 bullet. Light recoil in the Handi-Rifle and accurate.

Thank you very much for all the load info!  I appreciate being able to take advantage of all your experience.

Obviously, you have used this load a lot.

Have you experienced any difficult case extraction or signs of chamber ringing?

I hope I am not being insulting, but I am a newbie and need to ask these things.

I am probably going to make up some of these later today.

Sorry about the slow reply.  I change internet providers and things were a bit strange for a while.

I have had no problems with this load.  The cases extract easily and I probably wouldn't even need to resize them.  I have been using the same 50 Starline cases for years.  I do anneal them every once and while.

You are right about me shooting this load often.  Even though I have made it to my 70's part of my brain stopped at 10 years old.  I still get a kick out of shooting tin cans, dollar store shaving cream, steel swingers etc.  At my gun club we have a bunch of pistol bays that go out to about 60 yards.  The 10 year old me can be found there shooting at all kinds of fun targets.  Do you have any idea how far a golf ball will go when hit with 45-70?  I do!

I need to go load a bunch of BP 44-40 for my Lightning now.  A buddy of mine says he can beat me on a dueling tree with his lever gun.  You can't stay young forever but I am working on an entire life of immature.

330 gr lubed with LLA(no need to size;they drop at around .4585 with 25:1mix)topping 9gr Titegroup.Titegroup is not position sensitive and from my Pedersoli Sharps recoil is like a sweet caress from a young maiden.

I had a puzzling experience with my .45-70 reduced loads today and would appreciate any analysis of the situation that you may be able to offer.

The bullet vendor offered a table of loads supposedly supplied by Lyman.  The bullet is said to be Lyman #457130 (150 gr.).  I selected one of the milder loads, with the slowest burning powder in my possession, one with a bulkier powder charge (21 gr of IMR 4227).  I seated the rather short bullet just so the lube groove was covered and gave it a light crimp with a Lee Factory crimp die.

This load has a volume of about 1.6 cc, and the case has a published useful volume of 4.06cc.

I used a Ginex Large Rifle primer.  The bottle of powder was new, was not previously opened and was ordered this month.

I shot about 100 other loads today that used primers from that same tray and lot with no problems.

The first round fired with a report similar to that of a .22 LR, including the sonic crack.  The bullet hit the target at the point of aim.

The second did the same.  On a whim, I took a look inside the barrel, from the breech to see if there was any unburned powder.  There appeared to be powder on the barrel surface from the chamber forward for about ¾ of the barrel length but all in the 3:00 to 6:00 quadrant.

The third round appeared to be a dud from the sound (only heard the hammer fall), but case ejected without the bullet or powder.  The bullet did not impact the target.  The barrel was inspected and was clear.

Round No. 4 appeared to be a dud from the sound (only heard the hammer fall), but case ejected without the bullet or powder.  This time the barrel was blocked.  Using the cleaning rod, the bullet was found to be 6” from the muzzle.  The bullet was driven out with a single palm strike on the SS cleaning rod

I stopped shooting this load at this point.

I fired about 30 other .45-70 loads without incident.  They were standard power loads.

I don't think that 4227 is well suited for such a light bullet(not enough resistance for complete and efficient combustion).I'd rather go with a quick burner like Titegroup or Trail Boss.The usual ''watch out for double charging''comment applies here since the case is so large.

QC, I think I have support for your statement.  The below photo was posted by a fellow that said he got it from Lyman.  Note the low pressure listed for the IMR 4227 load! 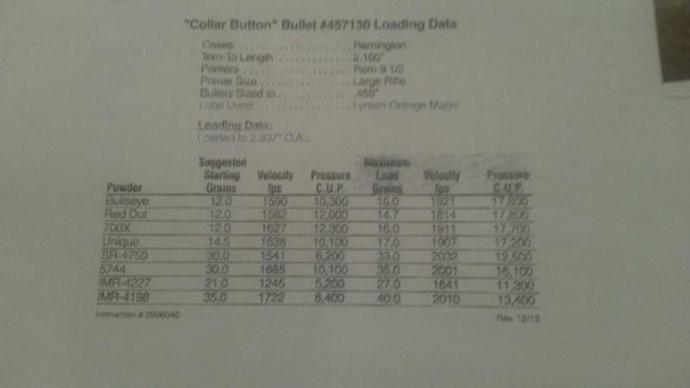 I was interested in a collar button bullet for fun plinker loads, but I went with a slightly heavier bullet from Arsenal.  Just couldn’t warm up to the short length to diameter ratio. 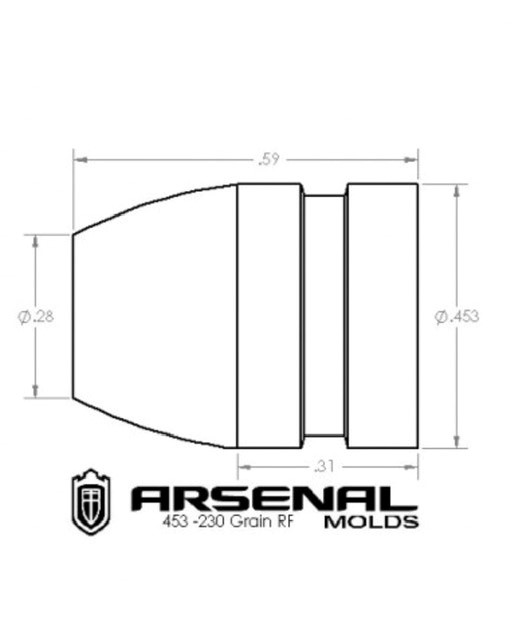 like Bud I will probably crimp over the front band or will play with neck tension.

More adventures with the Collar Buttons…

The first four rounds of the 14.5 grain loads went into a single hole at 15 yards.  Light recoil and a satisfying report.  Round 5 went “click-bang”.  That shot printed 1” below the rest.

Round 1 of the 9.0 grain loads went “Click”.  The case ejected empty.  I looked through the bore and it looked obstructed at first, but then there was a little light showing in the upper right quadrant.  I ran the cleaning rod in from the breech and pushed out powder.  The bullet had apparently left the barrel.  No further rounds of this loading were fired.

I am going to use some nice fresh Winchester primers for the next adventure.  I am debating whether to try some Bullseye loads or wait until I can obtain some Trail Boss.

I am beginning to suspect that the light bullet, with lots of lube and minimal bearing surface, is scooting out of the barrel before the pressure can build up for proper burning.  With all the burn failures I have had, the bullet seems to have left the barrel under the primer impulse alone.  I one case I thought I pushed the bullet out, but never could find it, so the blockage could have been the powder.

If I am blowing the bullet out of the barrel, using a wad would not work any better.

I shoot 26 and 28 grains of 5744 with a couple of different 405g cast bullets for light load stuff. Easy on the shoulder for targets and either will kill a deer just fine.