I recently aquired a stalking rifle chambered is 8.15X46R. I've made cases from 30-30 brass. I am wondering if anyone here actively loads and shoots this cartridge.

Yep, not a actively as I like, but take mine out a couple times a year.

The one I just got is a Sempert & Krieghoff pre-war German Stalking Rifle. I am in the process of making some brass for it. I have read that one's accuracy can be improved with somewhat longer brass in some rifles so I have made up a few (20) to start with. The powders I see most often listed are 2400, SR4759, and 5744. Any suggestions of other powders? What weight bullets do you favor? Where do you (speed) get your best groups and accuracy? Any other suggestions would be appreciated. Thank you.

A friend has a Greifelt falling block that got me interested in the cartridge. His chamber and the chamber in mine are "similar" only. Thanks for the powder information as well as the bullet info. It so happens the only Lyman mold I have that appeared appropriate for his rifle happens to be a 319247 which also cast a bit oversize and seems to fit his rifle well. On the next go around of loading for his rifle I have made up some brass that is 1 mm longer that the original cases I made for him. In my rifle I MUST trim the rims to .482-4" diameter but his does not require it. We did find his extracts the smaller rims better than the cases with the original 30-30 rim diameter. Thank you again for the info.

Mine is a Haenel/Aydt, full blown offhand rifle, chamber and barrel is tight, rim thickness is more critical than diameter, ther is no chamber cut for the rim, it sits on the face of the barrel and the block swings over it.....the cartridge is originally suppose to use a  stop ring bullet..

Rifle is difficult to shoot off the bench, best 10 sot group at 100yds is 1.6, iron sights 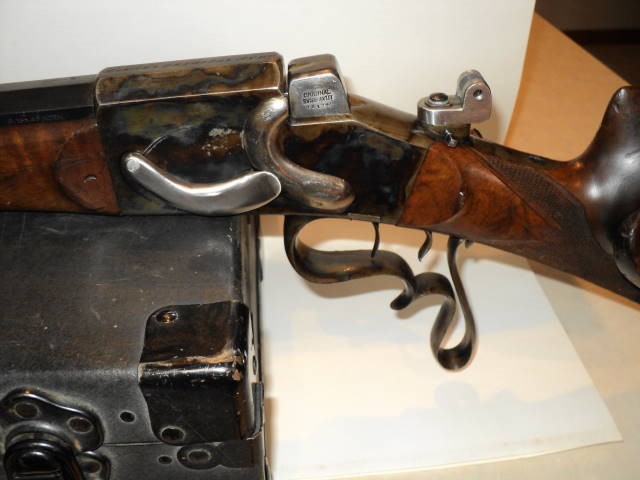 From my research, mine is not made for hunting either. I know they call them "stalking rifles" but my German correspondents tell me that before WWII "running boar" matches were very popular. The match was shot at about 50 meters with the target running down a sloped cable, from left to right, next one right to left. The rifles were made to handle like shotguns with a smooth swing and set triggers. They used soft lead bullets, paper patched and usually black powder, although ones after WWI were flaked smokeless. These were all fixed cartridges and they were the least expensive centerfire ammo in German at the time as they made millions of them. Mostly the cases were "seconds" (re-manufactured) from the formal target rifles like yours.

There are many Geman makers, using many different type actions. The one pictured with the external extractor, is a Original Aydt. I'm not sure what Ric's is. I'd have to see the breech block lowered. One of the most common actions is the Marini type.

The groove size and chamber, vary quite a bit. Mine has a groove diameter of .316 but, most are between .314 and .321. But, it's possible for them to go +/- .002 on either side of that. As you can see in the last picture, there are many different chambers, too. Those pictured aren't all of them. Many gunsmiths made their own reamers. There was suppose to be a "Normalization" of chambers but, even after that, the gunsmiths didn't adhere to it.

All that I've seen are proofed with black powder and marked under the forearm. The letters that you see with crowns are those proof marks. The first proof was done on the bore, before rifling and the bore size is marked. Most will be 7.6 or 7.7 (.2992 - .3031).

They shot many type matches but, they are all OH, that I know of. Paper targets, at 100 & 200 meters, the running boar, as mentioned and a Eagle target, placed on a pole.

All shooting was done with iron sights. the rear sight could be either aperiture or a long slotted notch sight. They also used a notch sight that fitted on the barrel dovetail, forward of the receiver. As I remember, the long notch is for the Eagle target and the barrel sight, for the running boar.

The chambers are long, with no step at for the end of the case. That area is for the stop ring, that these rifles were made for. Then they have a long lead forward of that.

6 years ago, I desided to use both of mine, for all of my OH shooting and I shoot mine, mostly breech seated. The BR group target and my best OH target, are both shot at 200 yards, with 12.0 gr of 4227, in ASSRA matches. The other group of 3 targets is my orginal load developement targets at 100 yards.

Believe it or not, the two match targets, were shot BSed, using a old, interical handle, oversize (.316 dia) Ideal 308329 spitzer bullet that I reamed the GC off of.

The last drawing is a stop ring bullet, like was ment to be used in these rifles. I drew this one with a .180 meplat, so Accurate molds could make it. It shows the SR at .326, it goes against the case mouth and seat the COAL. The COAL can be adjusted by case length. You form the case at 49mm, then chamber it and trim by the amount that won't let it go all the way in. I leave about 1/16" out and push that in but, it will leave the bullet in the chamber, if pulled back out, unless you size it. I don't, I use a push fit, into the case mouth. 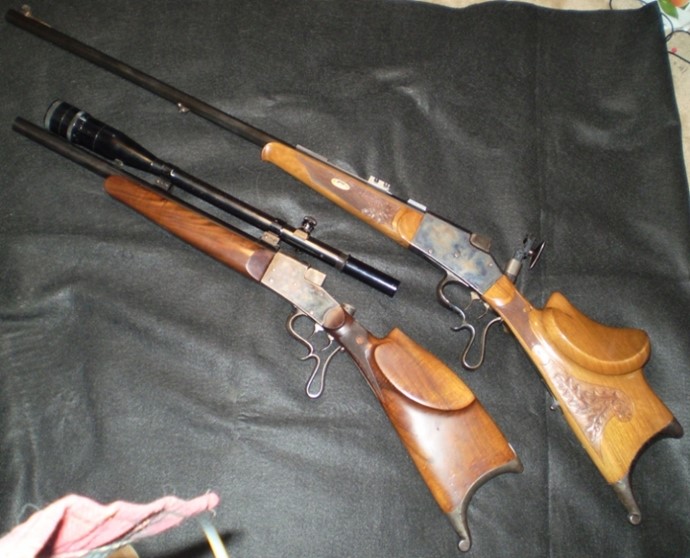 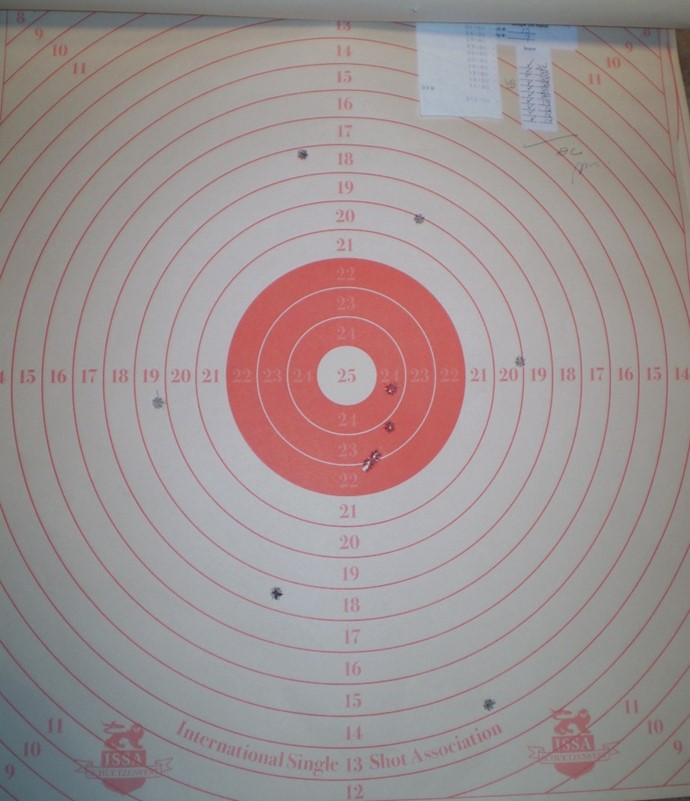 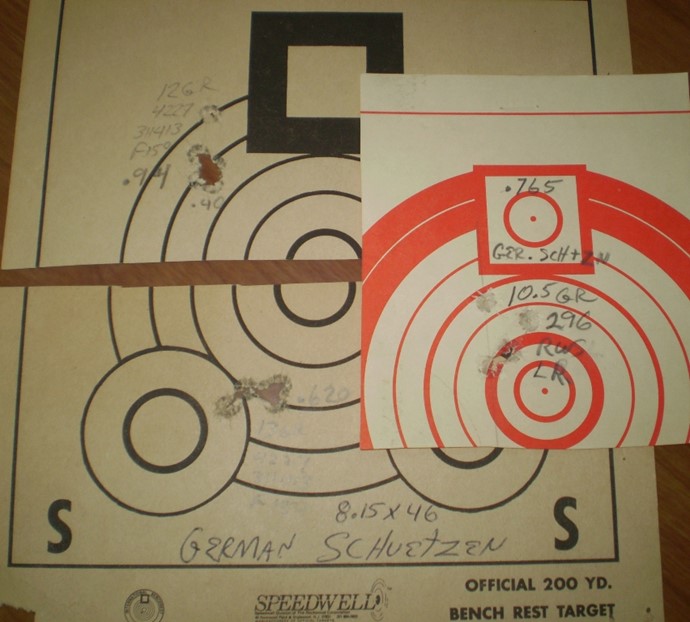 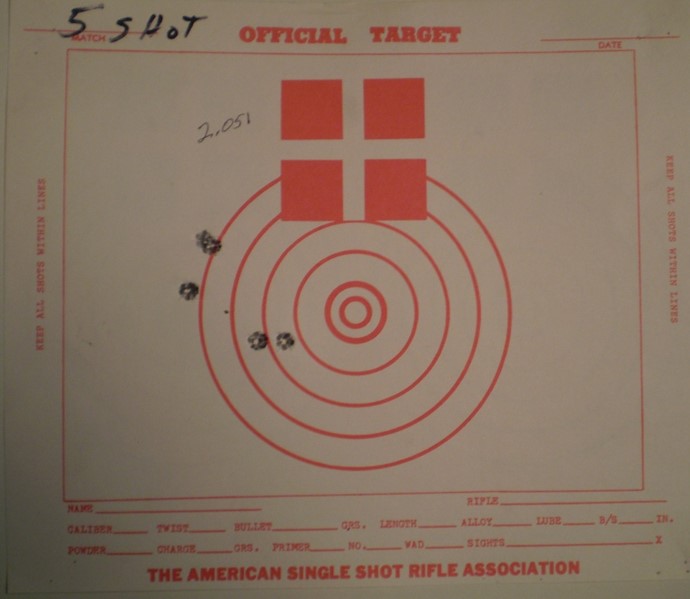 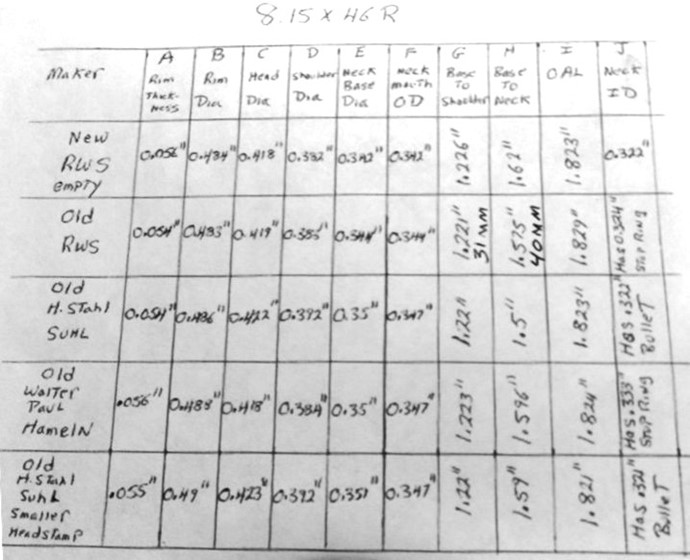 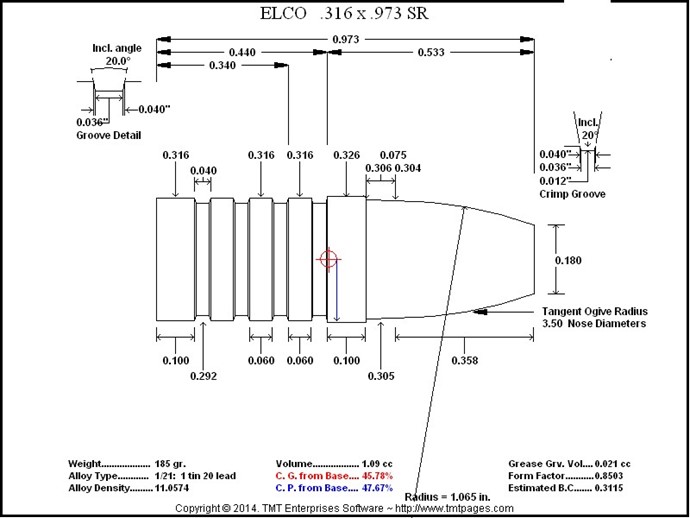 Thank you gentlemen. Ive gotten more information in this thread than I could find elsewhere on the web. I loaded up a few rounds yesterday using 2 different bullets and am heartened by the preliminary results at 55 yard (50 meters) using IMR 4759. I have found there is an improvement in my groups by adding .03 to the cartridge length for a total case length of 1.840. The bullets I have shot are both loaded as fixed ammo. I tried the Ideal 321232 and a highly modified Lee 8mm Maximum. The Lee mold has been shortened to yield a 202 grain pb bullet. Further experimentation is needed with other bullets and loads. Thank you again.

frnkeore, is the bullet shown in Accurate mold's catalog? I couldn't find it, but I may have overlooked it.

frnkeore, is the bullet shown in Accurate mold's catalog? I couldn't find it, but I may have overlooked it.

No, it's not in Accurate catalog, that I know of but, if you submit it to them, they should'nt have any problem making it.

I forgot to mention that even though the groove diameter varies a lot, the twist seems to be pretty standard at 360mm (appox 14.2).

My 321232 mold should have a U on it as it casts consistently at .320-.3205" so it is only  .003" larger than my bore,  I have altered the diameter by spraying Frankfort Arsenal Mold release in it. That little trick got it down another thousandth so now it is at most .001 larger than your ideal diameter. I generally shoot for .002" over groove diameter.  I really don't care for the stuff, but in this case I used it to achieve an end.

I slugged the bore and did a chamber cast to determine what I was dealing with as soon as I had the rifle in my hands at home. I had no idea, well actually a guessed idea, of what the twist is. The tight patch trick gave me about 1:15 but I don't have a lot of faith in me checking it that way.

I copied your drawing and will get a mold ordered soon. Thank you.

I bought a stalking rifle made in 1909 by Otto Selig a couple years ago in 8.15x46r. So far I haven't shot it a lot but at 50 yards it is very accurate. along with the rifle I received a mountain mould around 160 gr. the load I have gotten the best accuracy it the mountain mould with around 12.5 gr. of sr 4759. 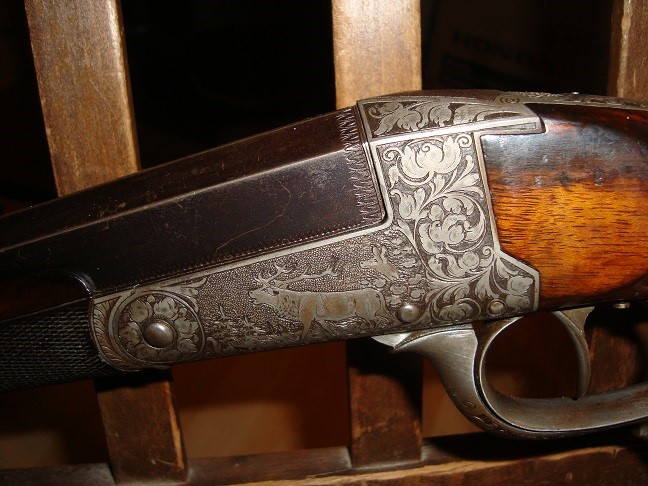 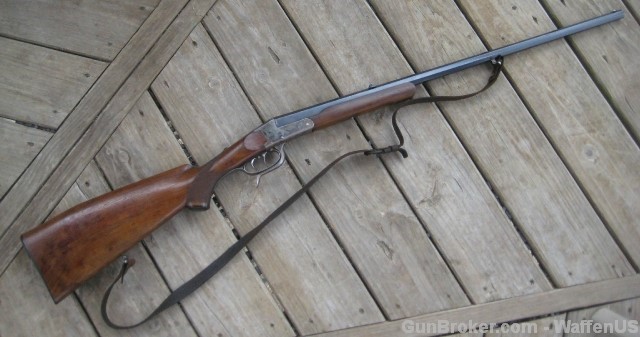 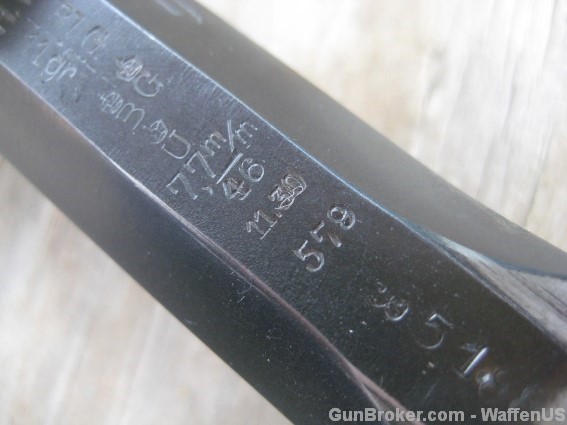 Some images of the rifle. Later today I will be loading a few up to shoot for accuracy. Thanks to all that have responded and given me some ideas of where to start.

That is a pretty piece for sure. I think this one of mine was proofed in 1930 but I am not sure. If I understand the proof marks, I have been told the 11.30 is the date of proofing. Does anyone know if that is correct? 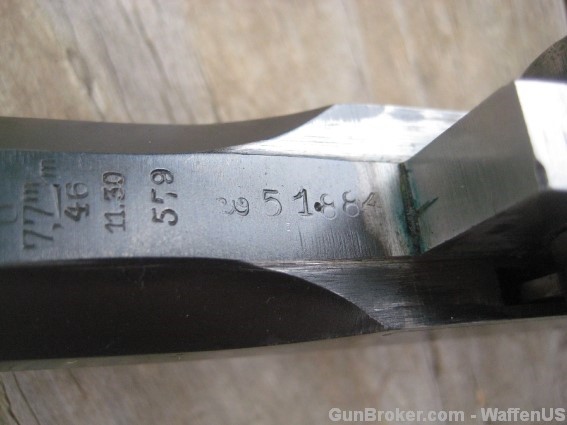 Mine is a hunting rifle with a Gerard scope in claw mounts, and sling loops 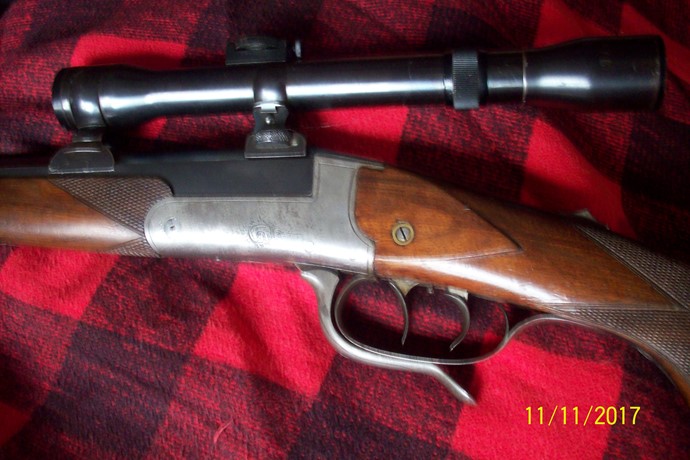 It is the same as a American  Patten but, w/o a number.

Frank, please explain....what is an "American Patten" w/o a  number.

Our Patent's usually have numbers and dates. Most but, not all German "Patent" stampings, don't add a number when stamping that they are "Patented".

This picture, from the book, Alte Scheibenwaffen (written by Americans), should help explain it. 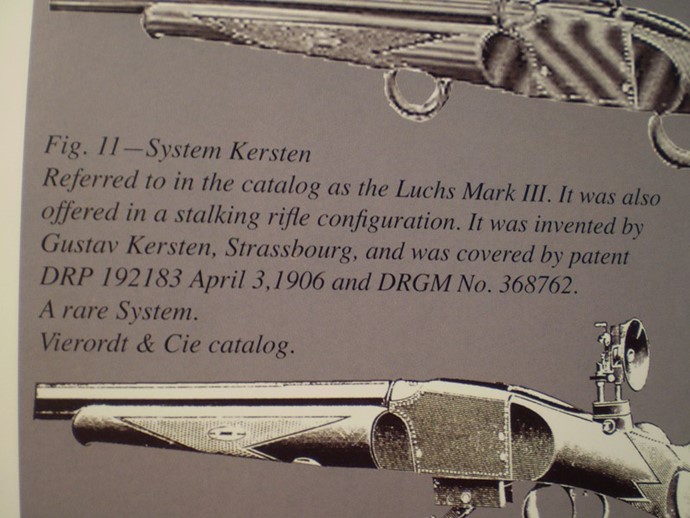 Spring time, so playing with the 8.15 again. Frank, it appears to be made on a Kittner (spelling, trying to remember from the De Hass book) style action. A typical "guild" built rifle with lots of apprentices working on it. Slugged the bore; bore is 0.310" and groove is 0.321". Rifle was proofed in 1939, so that may be the reason it has a military specification bore. It is also marked as "sport steel" so I am assuming that it is very soft and only made to shoot lead bullets.