my tc encore with a 23" MGM barrel in 444 marlin with a whole host of cast boolits will agree with you. i would take a 300gr fn gc that goes 1624fps and it would kill deer just as a 265gr Hornady fn with a max load, but without the bloodshot meat.

i hunt in swPA and there is no problem with bottlenecks. i have a 14" Contender factory muzzle break barrel that i just abhor. it was given to me by my dad (RIP) and i don't like the muzzle break!!!

My 2 cents.  I have all the above Contender/Encore barrels, and then some.

BUT, my favorite Contender deer hunting cartridge for woods ranges is the .375 Winchester.  Full loads using 265 gr Lyman/Ideal design cast bullets.  Accurate and very effective.  It would also be legal for those states that have a problem with bottle necked cartridges.  NO hassles with case forming:  just order from Starline.  My barrel does have a muzzle break, and even then you know you fired something.

Let me know if you need dies.  I came by a set in a trade and have no use for it.

The .357 Herrett should work very well since it was developed for Contender use and usually loaded at lower pressures so it lasts a long time if headspaced correctly. 30-30 Brass is plentiful and cheap (pick-up brass can usually be found). 357 Maximum and .35 Remington brass is frequently pricey and/or hard to find. The .357 Maximum would probably be the better choice for an area requiring straight-walled cases for hunting.

I shoot the 357 Herrett and love it , I resize 375 win. or 38-55 brass and adjust dies to where the barrel just closes and very rarely get a misfire then neck size only , and shoot a 310 gr. paper patched bullet . even on first firing get 1 moa .

#2   The 35 Remington is the best of all worlds for a 35 caliber T/C. Having said that, the 38-55 can arguably deliver a tad bit more punch BUT the barrels will come with a .375 bore and not a .379/380 bore. I would opt for the 35 Remington. All of the internet negative comments about the 35 Remington in the T/C are based on folks who do NOT know how to headspace a 35 Rem on its shoulder. It requires meticulous care when sizing the cases to maintain proper headspace in the T/C chamber. Once you fireform, neck size only to maintain dimensions. Easy Peasy. 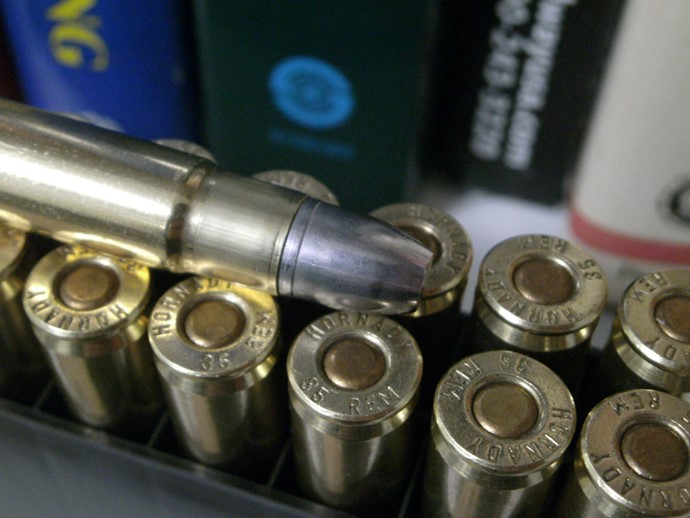 Forming brass to 357 Herrett will be painstaking to get it right. The barrel needs a good snap to close right.... keep that in mind or you'll get misfires. Once you get the forming and loading procedure right, you will get sub inch groups at 100 yards and excellent kills with it. Go for it.