I recently enlarged the heel of my 310 bullet mould so they could fit in my guns fired shells for finger seating.

I was getting what appeared to be two seperate groups if I fired enough rounds or so it appeared.

Now I had been blaming the white and red boxed Remington SRP I got given like a two thousand primers .God knows how old or stored.

I bought some new WW srp on special when the covid started before the price hike over here and things went bonkers.And now are using them.

So I thought I’d sort and shoot each cavity.

I found one was a bit bigger size but found a sliver of lead in the mould front halves so it should be good next batch..Dohh!

I shot from a clean bore 10shots each of a good load that may need a light tweaking.

all were loaded as cast , finger seated and finger lubed the outside after with 50/50 be/vas

‘now these groups at 50 yards don’t look too good. 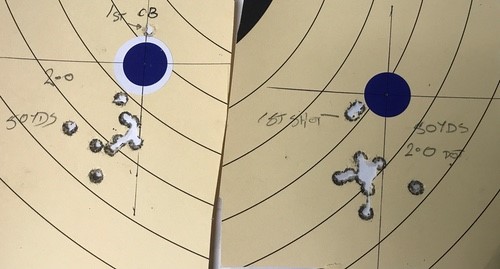 But when you overlap them and put a dollar coin on them they aren’t too bad. 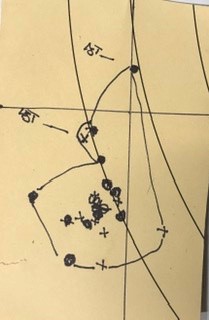 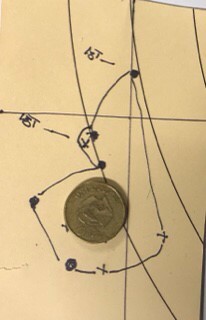 I could say the 3 high holes are from fouling to condition the bore.

‘But the 5 other outliner holes at double the sized the others have me worried.

‘Should I try another type of aim point.

Or is it something else.

Those little sticker dots seem quite fuzzy and small.

I have a lettuce protector load of about 750 fps with 1.8 grns bulleye that you can hear the bullet whizzing down range that seems quieter than a 22lr.

‘But that’s another story.

‘Any thoughts from the guru’s on this stuff.

I have always used CCI small pistol primers in my Cadet.  I know from testing over the years that in small cases primers can make a big difference.  Your change from Rem to Win could be part of the issue.

You are running a very light load.  4-4.5gr of Unqiue tends to be the sweet spot for the Cadet for 12-1300fps duplicating factory.

The aiming point is rather small.  My standard bull for 50m is 2 inches.

You don't mention alloy.  I run 40-1 in my Cadet with great success.

Barra, I agree with Jeff in that your aiming mark is way too small, a 1" dot is far smaller than I can see over/through steel. I am in the middle of doing some testing with my cadet at present, I won't let too much out of the bag but am pleasantly happy with the results. I use WW primers in my cadet, and I don't know about rifles but in a pistol the primer can make all the difference, I suppose if you have small charges if could make a difference with the flash burning faster/hotter. I would say that is another project waiting to happen, dozen different combinations of primers with the same known load.

Just out of interest for the brains trust, can you measure your fouling by how dark the lead smear is on the target? Comparing Barra's to what I am getting through my sewer pipe of a barrel (pics later), mine is a lot lighter in colour. Could it be the lube used, I am running white Label, he is using a beeswax concoction.

So as a teaser, I have posted below a couple of my targets shot last Sat. At 50yds and I called the flyer out at 11.00 on the first target. A tad windy but not unmanageable, just over sandbags, will chronograph next time out but would think somewhere around 110-1200 fps 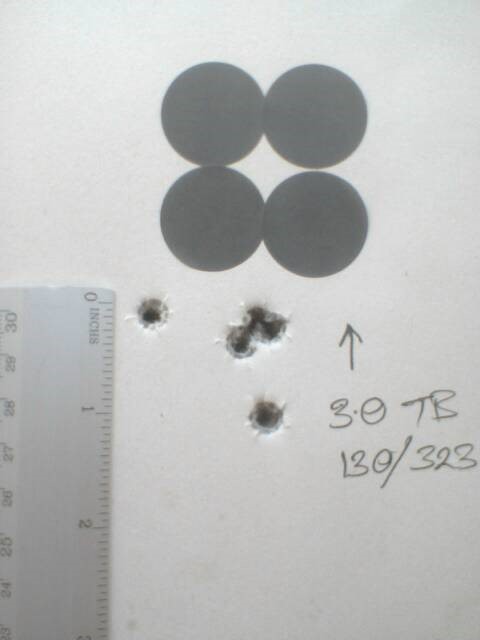 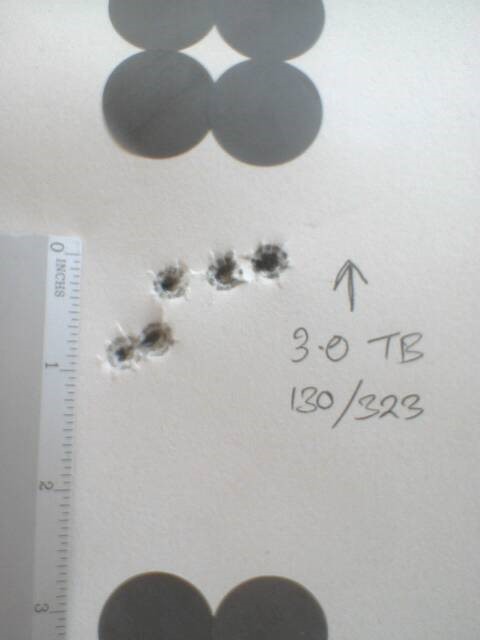 I wouldn't mess with the load until I tried it again with a much better target.  A white square, or 6"+ diameter white circle, in a dark background is far better for old eyes than trying to put a post in or on a dark bull of any size. Smaller is not better.  Center top of post in white aiming point.  If you are under 25 of course anything will do.

I will try a bigger white aim point in a black circle.

Do I really have to have them at full noise?

I believe they would be illegal in the rook and rabbit big game event.

I don’t want to punish my self too much with hard recoil and ear splitting noise.

I suppose I could lash out if I have to.

My lead mix was about 30:1 I worked out or softer.

‘Then some damn fool cleaned up ground zero and put handfulls  of odd bullets into the pot.

‘So it cast real shiny now .

I suppose I could lash out if I have to.

I know what you mean. I do recount a funny story of the days back in the 70's when I used to shoot 452AA in my revolvers. For those that remember, it left a lot, and I mean A LOT of residue in the cases and barrel. After a session at the range and at home cleaning out the container I drop the cases into after firing, I had quite a lot of powder in the bottom. We always commented on if you had enough could you load and fire what seemed like a mixture of burned/unburned powder.

Enough was scooped up to half fill a case, the worst that could happen is I would have to knock a projectile out of the forcing cone. Projectile seated and back at the range next week, aimed at a target at 10yds and let loose. To everyones surprised it DID discharge, albeit a little underpowered but made it through the target.

I profess to have no Scottish blood in me, but have been labelled more than once in being the only person proven to use the same powder twice.

Tony: you are my new hero.

Looking forward to hear how you get a sewer pipe to shoot.

I have one of those that I can’t even get the pipe clean.

‘Maybe if I spend a few more hrs on it.

the chamber is way smaller than the barrel.

I just say that I’m too ikkie to waste powder , but the fact is I like I enjoy shooting light loads.

The bw /vas lube tends to smoke a bit. Maybe it’s clinging onto the bullet.

‘If you want to see black then wait to you see a 180 gn tapered bullet filled with it.

‘I only use it ‘cos I can get the components anywhere and no brainer to mix.

‘It seems to work and I can use my loaded rounds as lip balm if I get chaffed lips.

Don’t know when I’ll get to shoot them yet.

The alloy is too hard I think but we’ll see. 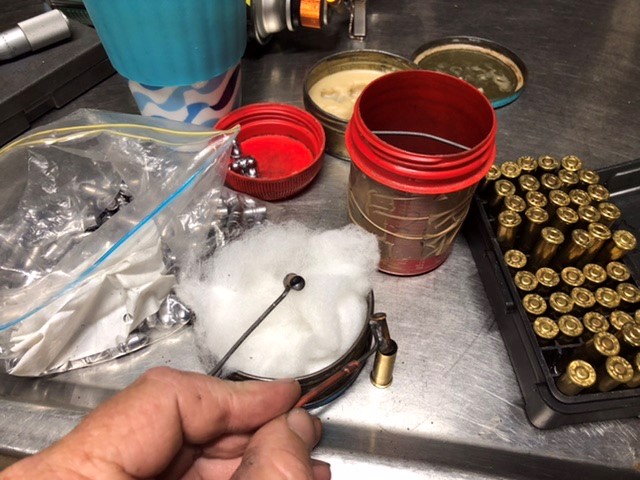 I use straight wheel weights no sizing and lube with liquid alox or 45-45-10 with 10.5 gr of 296 winchester and a small pistol primer my rifle does not like rifle primers

Loaded only one side of the mold today.

It is casting one side 1 thou larger and they are hard to chamber if I use these cases.

I have some cases I was using for breach seating which are shorter so setting the bullet long and letting the case seat to depth will work for the larger one.

I hadn’t picked it up as I was loading by breachseating and it was working good.

‘The alloy is too hard and I think I will loose a thou on a soft alloy so I won’t have to shorten the cases 10-15 thou to compensate.

‘Anyway used a bigger aim point and a bigger white on black background seems the winner. 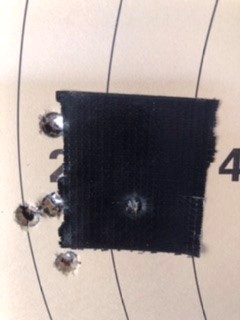 ‘Not a bad group considering it was gusty / blowy.

This next one may be interesting.

‘The first 3 were shot with different cases but with a new primer brand.

‘The rest were loading the same case and it seemed to just get better.

‘Maybe I shot out a bit of lead or something or the barrel conditioned itself to the new primer. 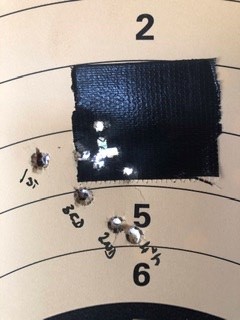 ‘when I got home I realised I had bought a different brand of primers to that one in bulk.

‘So I will have to test that out now.

‘No manufacture marks on it thou.

I have cast a heap more now.

Bit of an update to this on going quest.

Went and sorted out the both sides of the mould into different piles now.

separated and used some slightly shorter cases for the larger sized mould half.

Some were tight some looser ,so I will have to size them for more uniformity.They don’t seat to the case mouth so the looser ones may have re adjusted themselves a bit showing up in the group.

All shot at 50 yards of a sand bag and towel holding the rifle.

Using some seller and ballet small rifle primers that I was told were the good stuff and bought in bulk cheap.

I don’t think I could afford to change primers at this moment in time and I’m pleased that at least this packet seams to shoot better than the thousand 30yr old mixed lot of small rifle primers I had just finished.

First  pic shows 10 shot group using the good sized ones in their made to do cases . 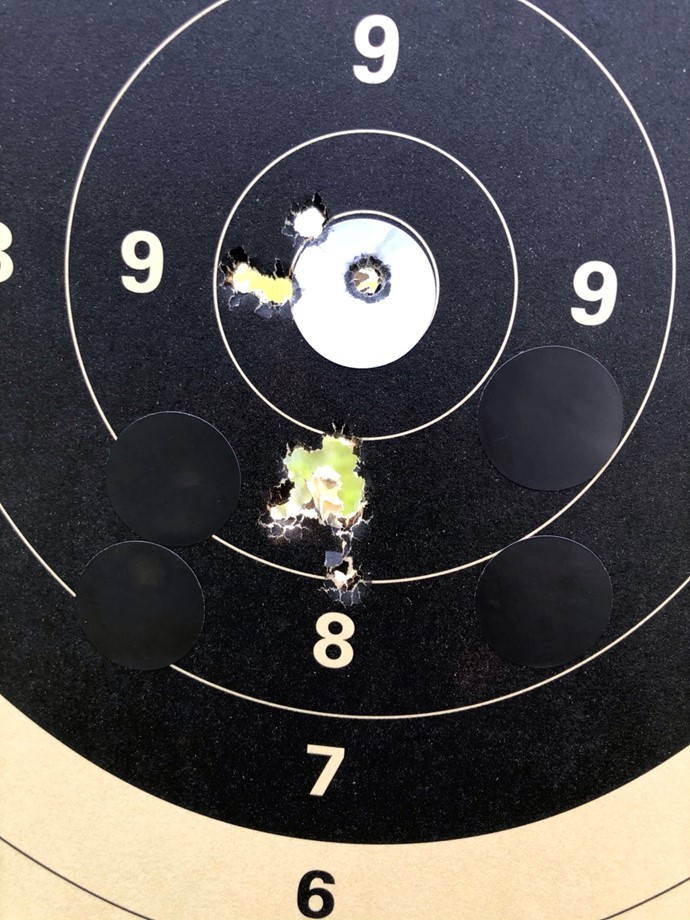 The ones above is where I was re-sighting  it in to zero afterwards.

The next is a 20 shot group with the odd side of the mould and not fitted cases.

‘it started to shoot two seperate groups one near the middle of the dot and another above and right slightly.

It then shot  the sighting point out and the group filled in between the groups.

there were a couple of odd flyers but not too bad and I think they will work well if I resize the cases so as the bullets are kept fired in place. 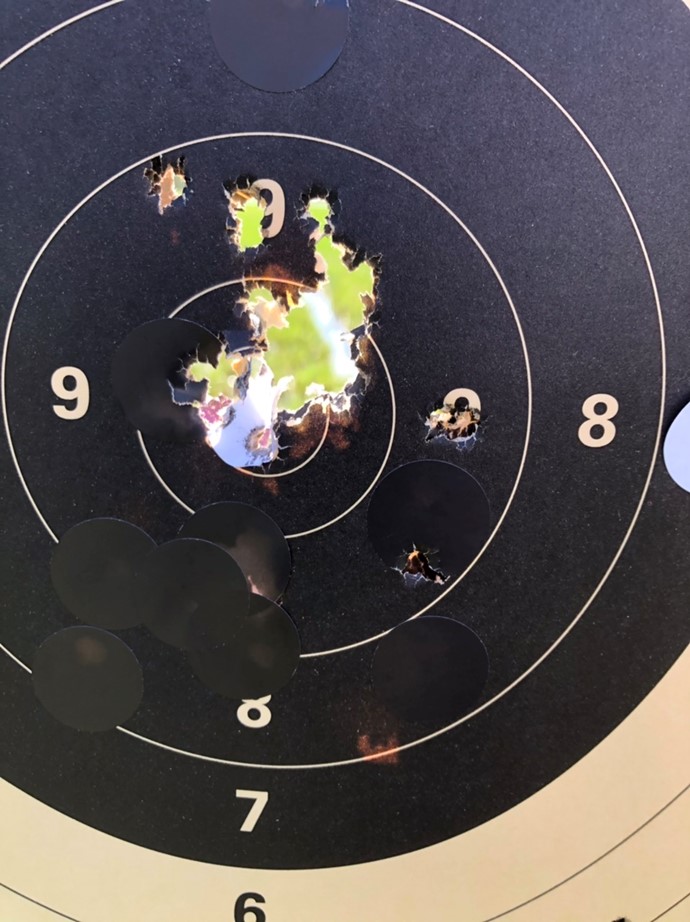 Got a bit ridiculous in the end trying to see where I should have been aiming and that’s where things got a bit pear shaped.

It looks like I have it shooting again at last.

It was a good day for the sun and targets really shone out and were clear.

Must have been the right light and time of day.

It was a bit blowy but good enough with no wind flags.

Now I’m just back to square one with fixed ammo now instead of breach seating.
I may try a few next time I have her out and about and see if I can shoot it better . But I’m on my limit of visual and probably shooting abilities anyway.