Some of you no doubt do rust bluing or browning or have in the past at one time or another and already know this but thought that I would post this anyway.

I won't go into the detailed process but for those who don't know, it is a process where by one can either get a traditional  brown finish on metal parts, such as when building muzzle loaders or bluing, when that kind of finish is desired. Similar chemicals are use for both, just a different procedure. Both rust browning and bluing require either a humidify and temperature controlled sweat box to create rust or heating of the part before application to create the rust. And then finally boiling in a tank of water to turn the rust to blue..

I have used Laurel Mountain Forge  rust brown for many years when building traditional ML's, But when using it to blue, the parts still need to be finally boiled in a water tank large enough to accommodate the parts  in order to turn the brown to blue.

The Mark Lee Express Blue #1 process is a little shorter but still requires boiling in a water tank after each application. Which is of course large enough to accommodate the barrel or what ever. And time consuming.

This is where the short cut comes in. When using either MLF browning solution or Mark Lee's Express Blue #l, the water tank and boiling can be eliminated.

When using both MLF and Mark Lee's Express Blue #1, Just get sections of PVC pipe that are long enough and large enough to accommodate the parts that are being rust blued. Glue a cap on one end, hang the parts inside the pipe and fill with boiling water. Let stand for 10-15 minutes, withdrawn them and lightly wipe all the water off. The rest of the water will evaporate because the part is now heated.

in a ” hold-my-beer-and-watch-this ” moment, i ordered a electric steamer gadget from amazon ....to try a rust blue trick ...

i think i will start with a cheap gun frame ... could fail to meet professional standards ...

i use laurel mountain solution .

Any clear pics of the results of both browning and bluing?

My old  digital doesn't focus close ups very well  along with my feeble attempts at photography but will see what I can do in the next couple of days.

Just to clarify the photo a bit. That TC Contender barrel on the left was polished with 320 grit paper and then blued with Laurel Mountain Forge browning solution. 400 grit was used on the other barrel before using Mark Lee's #1 rust blue.

The intent was to try to show the difference between the two. Contender barrel more of a flat finish as compared to the other which is more glossy.

The steam tube is a great trick, especially if touching up a really long barreled action.  If I can figure out how to upload a photo, I'll show one I did with the Mark Lee's Express Blue #1, carded with degreased 4-ought steel wool as I find the Express version to make a softer oxide (initially) than the slow method/sweatbox. The usual soft carding wheel makes a more dull and silvery finish with the Express product.  I prepped down to 600 grit to make certain the scratches were out and then roughed it up wtih 400 again, based on results from a test piece.  I totally agree that 320 is just not fine enough for the Express Blue since it doesn't etch in as hard as the traditional formulas.  One caveat regarding the steam tube:  Using it for pre-heating like you normally would with a boiling-tank dip before application of the Express can spoil the finish because water will condense on the colder metal. 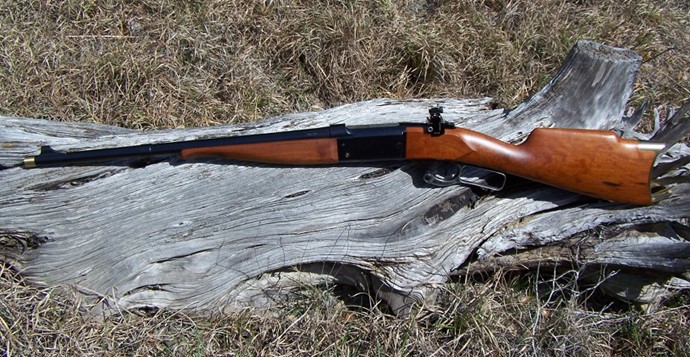 Not great photos with noon sun glaring on it, but here's more of a close-up of the bluing.  It's a very rich, distinctive blue that looks "deep". 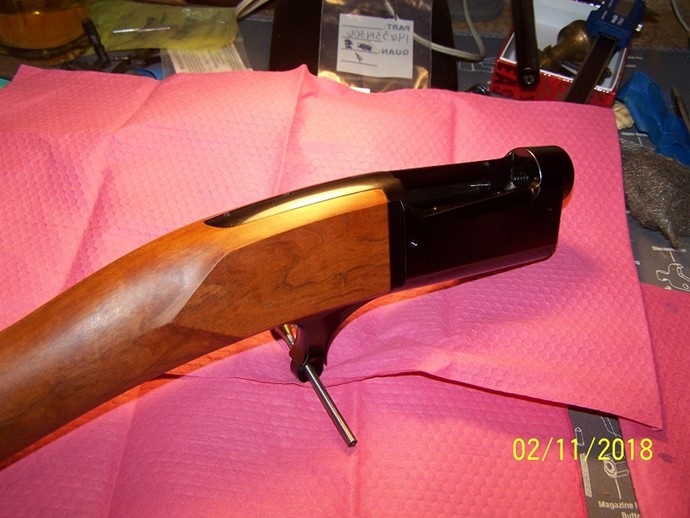 Good looking rifle you have there.

That really is a good looking M99.  Did you make the stock too?  The close-up shows very good wood to metal fit.

Good thought with the pcv pipe.

I used the Mark Lee formula on a Mauser 98 build.  It came out a black/gray; very happy with it.  Used a section of metal roof gutter folded at the ends to hold water; centered it on a hot plate to keep the water up to temp.