Questions for a 35 Krag

I know it has been done but there seems to be vary little information out there from those who have done it.

I have loaded for and used several different 35 caliber rifles through the years but after noticing some talk on necking out the old 30-40 Krag to 35 It got me to thinking, how would it look and how would it work.  One evening at the loading bench produced several Krag cases and a 35 caliber necking up die I had made years ago for necking up 06 cases to the Whelan and in a couple minutes I had the first sample case.  It looked good.

I have had a 1899 Krag action around for at least 20 some years and had at one time ran a Zyglo NDT on it and it showed solid with no cracking.  A Adams & Bennett barrel ( 1-14) was found on fleabay and away we went.  Chambering was accomplished using a Clymer 30-40 Krag reamer with a pilot to fit the bore then a necking reamer was ground up to open the neck.  A .100 throat was done using a Clymer .358 throater.

After a chamber cast was done to check the actual cut chamber the cartridge length was selected at 2.250.

Not having any wood I elected to tie down the barrel action into a old tire, aim it well down range and fire it off using a length of cord while hiding behind a wall.  Several loads were fired starting what I felt would be light and ending up with a 200 gn. Hornady FTX and a Lyman 358315 both backed up with 40 grains 3031 which should have been roughly the equivalent to a good 35 Remington load.  No obvious signs of pressure were observed, the cases were well filled out and all dimensions were what I thought should have been correct.

Have currently been laying out a nice piece of Koa and chips will start flying by the weekend but am slow at stockmaking so it will be a bit yet.

What my questions would be has anyone done this, am sure someone has but what were the loads you have used?  The Krag I think is shown for 40,000psi but it might be smarter to hold things at around 38,000 to 39,000 psi max.

I know there are various computer programs out there but I am not much of a computer person.

Any and all help or information you might have would be greatly appreciated. 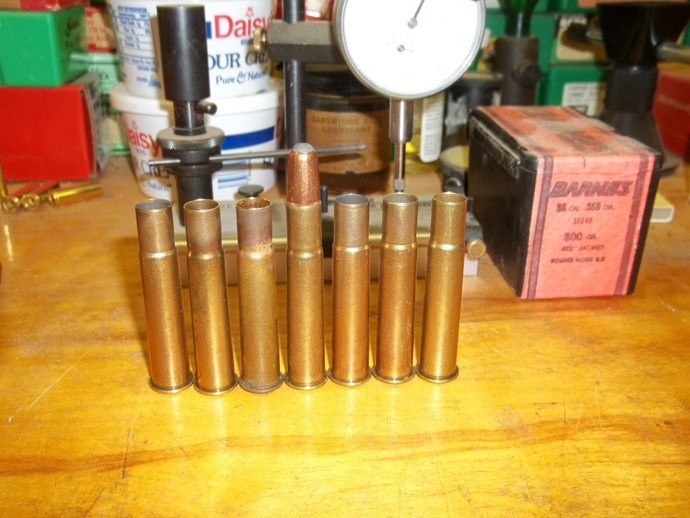 This was written up in the 1960's, by a guy named Rockefeller (IIRC), wanting to make his Krag into a 35 Winchester. He ended up doing what you have done and used 35 Winchester data. Not much, but a start point.

what leade angle is your throater ??    any special hints on threading and fitting the barrel on the krag  ?? i won't need to index .

cautiously i would expect that any starting cast bullet loading for the 30-40 krag out of the lyman book would be close to ok for the 35 .... cautiously

Yes, seems like I have heard of using 35 Winchester data as a starting point  I think what I am hoping here is I can con someone who has a ballistics program to work out some starting data to help keep me from overloading that old one lug action.  That or if someone has done this in the past would share their information to at least give me a idea of what has worked.  I do dearly love the Krag action but understand its limitations.  Would prefer to keep the powder selections to what I consider old standbys, 3031, 4895 IMR types.

I didnt know how the action would feed but referring to deHaas's book on rifles he stated it should work fine even up to the 444.  Cant speak for the 444 ctg. but made up some dummys on this 35 and just threw open the magazine box, dropped in a few paying no particular attention, shut the box and worked the bolt--- flawless !!

Not sure what the throat angle is but it would be whatever Clymer uses in its standard throater but just at first glance it looks like 2 degrees 30 minutes or 5 degrees included, best to check on this first.

I made a wax impression of the threads in the hood extension to determine the pitch and exact thread dimensions,  for the most part it appeared to be correct according to standard shown dimensions, 10 TPI square.  Thread groove width was .050, I ground my cutter to .051, this clearance seemed to work well.  Was very surprised at the thread depth, was  aprox .030 on a side or .060 included.  Sure seemed shallow but its best to never argue with success.

Checking extension dimensions to the inner ring and bolt face I noticed my action actually had about .005 headspace built in.  Wanting to tighten things up a bit I created a false extension length ( extra) of this extra length with a diameter to just clear the diameter in the inner ring, its not much but allowed me to get a much more positive headspace.  Fired cases come out with nice flat primers.

Now if I can just finish painting the east side of the house I can get back to getting that stock made.  I really want to see how this thing will shoot !!

I could not get the round nose lead bullet to swing to the right and line up with the bore. And since it has square threads, instead of the silly pointed ones, the 0.030" is way more than needed.

Correct, the nose of the bullets for my other rifles would not slide over. Rather than mess with it, I just redid an '03 barrel and chambered for 30/40. Simplest and made a great cast bullet plinker.

I know its after the fact but it might have been overall length or perhaps the shape of the ctg. that prevented proper feeding.  At any rate am glad the 35 cal on the case the action was designed for worked out as the thought of trying to go in and start changing the internal shape of that action would keep me from sleeping at night !!

Anyone else have any thoughts on this ????

There was some discussion on this on the Krag Collectors forum a few months ago.  Might try a search there for data.  IIRC the 35Win was loaded for the 1895 WIn which is a slightly stronger action than the Krag so 35 Win data may be a bit hotter than the Krag was designed for.

I thought the 95 was a bit stronger is why I have approached this carefully.  Will check out the Krag forum  If anyone has seen mention of this anywhere else would appreciate knowing about it.

Am just sure this has been discussed in time gone by but cant remember the details.

Just a comment/FWIW Observation from my BPCR zone.

There is a factory ctg that is essentially a 35 Krag:

I have a Lilja barrel on a Brg BPCR action, 10 twist,

OH, is that water capacity of 86 grains to the case mouth or is it

to the base of seated bullet or base of neck?

Powley computer could come up with a suggested load.

It works off of water capacity to base of seated bullet,

and bore diameter to work up suggested smokeless powder, charge

Add barrel length, to even give a pretty close velocity.

the Powley works off a base 45000psi, but one can calculate downward