while drooling through the Midwayusa.com pages of goodies, i see they will shortly make available some more M1 Carbines ...  shooter grade apparently ...

every real American should have one of these ...  even I gotted one awhile back and have several gallons of cast bullets through it ... still makes me grin ...  80 years old and still rattles them off ... just like me !! ...

i suppose they might need more than the $22.50 i paid for mine through the cmp .. but heck, any real goods will be doubling $$ next fall anyway ...

if interested, better get in line immediately ...  if sanely priced, these will go in minutes, not weeks ...

I sold an entire collection of them less than half of that price three years ago through gunbroker. That seems to be a lot of money for a big 10/22 you can't do much with. It's not like .30 carbine ammo is cheap anymore at $1 a round.

I asked to be notified when the Midway 30 Carbines became available,  As the cheapest one I saw was $1,200 I think I'll shoot my Universal M1 if I get the urge to shoot a squirtgun.  Might be a good time to put it up for sale.  Gp

I was mildly interested until Midway stated that they wouldn't ship to California.  After all of the business that folks in this state have given them.

Shipping to California is easy.  I buy from guys on Gunbroker a lot with no problems.  This California boy will buy from some one else from now on.

I just can't believe the prices they're asking.   A box of ammo today is more than I paid for mine back in the '60's from the DCM!

To ship a handgun, to California, is a nightmare. I quit shipping handguns to California years ago. I shipped a lot of firearms, both hand guns and rifles to California, but the last time I tried to ship a single shot target pistol, to California, I gave up and sent his money back, plus a little payment for his trouble of buying .I shipped a few rifles after that but haven't in a while, so I don't know, what shipping a long gun is like at the present time.

Midway had some!!!!!! There all gone now. WOW, big inventory sold out in just a couple days.

The prices Midway got were amazing. For a 30 caliber "blaster" I'd opine that a Ruger Mini 30 costs less, ammo is cheaper and, if you handload, can equal 30-30 performance.

geeeeze ... i got an email that Brownells done gots a special on genuine war surplus 15 round carbine magazines  ... marked down to $40 from normal $50 ...

wonder if they come packed in tulip bulbs ??

Back in the '60s a lot of guys bought them for use as shark guns.  The surplus ammo was dirt cheap and there was not a sportfishing boat on the West Coast that didn't have one in the wheelhouse.  They worked fairly well on sharks, as well as anything, and even better on seals and sea lions. Today I have no real idea what anybody would use one for, with soft point ammo they might make a fair home defense weapon if the wounds I put in sharks with that Norma 110 gr. soft points were any indication they would be better than the 5.56 Nato even with soft points.  I suppose either round would do the job though.

It's sort of the conventional wisdom to repeat that they aren't good for much of anything.  But with about twice the energy of the 357 that is kinda crazy.  Brodie is right, with the right bullet, better than a 357 pistol for home defense and folks hunt deer with 357 rifles -- so----

It is just fashionable to say some things.

My father-in-law carried one in New Guinea. He said he loved it.

Like Finn Agard said: "You are always better off with a rifle than with a pistol.  Even if it is a carbine.".  Over the years I have point shot more running jackrabbits with a 10/22 than I want to think about.  I have tried it with a pistol and had some success, but I still fall back on two hands and swinging like I would a shotgun.  It is the only way I could ever hit them unless they were running straight away from me.

Yes, I carried that 30 carbine deer hunting a couple of times, though I never got the chance to shoot one with it I was not worried about "Power" because they were those little coastal blacktails in California and not a heck of a lot bigger than the jackrabbits.

I've owned an M1 Carbine, sporterized but with matching serial numbers for a number of years.  Long ago someone drilled through the receiver to install a scope mount and they left burrs inside that prevented the bolt from operating smoothly and caused many jams or stove pipes.

A little time with a Dremel tool fixed that right up.  I have probably 300 rounds of a Spanish made factory ammo and another couple hundred cast from a Lee mold specifically for the M1.  It's an accurate little shooter, really accurate and it's a lot of fun to shoot.

I can't believe I see complaints about the cost of factory ammo on a site devoted to casting bullets, but to each their own.  A little H100 and some small rifle or pistol primers has always served me well.  My dream pistol would be the Ruger Blackhawk in .30 carbine to match my rifle.

One time I was driving deer by walking through a large wooded swamp towards some friends on the other end.  I'd only taken the rifle because it was light and I didn't expect to see any deer in the dense brush and forest.  As I walked up a hill I saw a large whitetail buck standing in a fire lane.  I raised the gun and put the cross hairs on his chest, the gun went bang and the buck stood there looking around.  I refocused my eye and realized I could see a branch between us waving up and down.  So I took a step to the right, sighted and pulled the trigger again.  The RNSP struck him and he turned and ran up the hill.  I found him heart shot 30 yards from where he was standing.  He jumped a stone wall and fell down dead.

I have no complaints at all about the M1 carbine or it's effectiveness on a well placed shot from close range.  It makes one hell of a fine home defense weapon as well with a 30 round magazine installed it's a lot of firepower at close range in the house.

my favorite full load bullet was a hollowpoint 3118 out of 22 rf alloy, gas checked.  never got leading or gas port clogging with full loads, not sure why not.  but was devastating on small critters .  on rats, more like vaporizing....

It's sort of the conventional wisdom to repeat that they aren't good for much of anything.  But with about twice the energy of the 357 that is kinda crazy.  Brodie is right, with the right bullet, better than a 357 pistol for home defense and folks hunt deer with 357 rifles -- so----

It is just fashionable to say some things.

I've only shot an m1 carbine a time or two so I don't know much about them, but your comment makes so much sense.  People will repeat things - just because.  Didn't conventional wisdom say you couldn't hit anything with a 1911?  Mine shoots good. 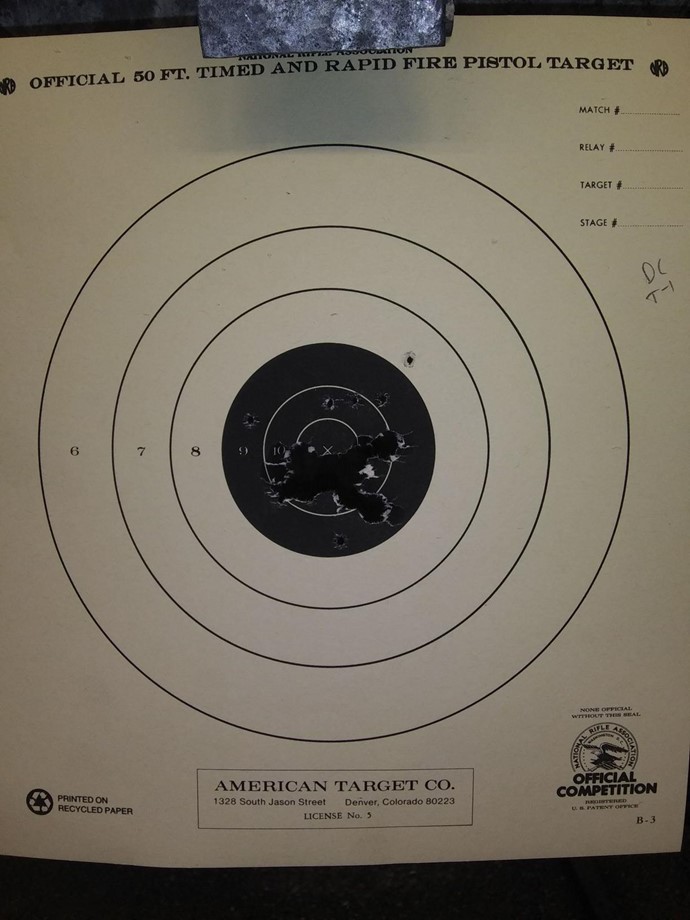 More likely garlic and polenta.  Ask Giorgio, maybe he knows how the Carabinieri stored them for so long.

I recently sold my WW2 Inland M1 carbine for top dollar because everybody seems to want one for a home defense gun.  I had fun with mine, but wasn't crazy about it, so when I got the right offer I sold it with no regrets.  However, I still wanted some sort of rifle which could exploit the .30 carbine ammo I have in abundance, as a companion to my Ruger revolver, in keeping with what I call "The Harry Archer Protocol."

Objective was to have a light, compact take-down, backpack rifle to accompany my Ruger Blackhawk in .30 M1 carbine, which can also digest .32-20 rounds.  The resulting barrel installed on the Infamous Bunny Gun, just back from John Taylor, weighs 5 pounds and is 36 inches overall when assembled as shown here.

Barrel was turned down from a WW2-era Browning machinegun barrel and is of 4-groove, government form, .308 groove diameter with one turn in ten-inch twist. Chamber is standard for the .30 M1 Carbine, except its being long-throated like an '06 for 174-grain Ball M1 or M72/M118 pulls seated to the cannelure on the Ball M1 pulls. A nominal case full of IMR4895, gently compressed in the same manner as loading black powder is subsonic and stable.

A rim seat was cut in rear face of the barrel to permit expedient use of .32-20 ammo. The rifle will positively eject either rimmed or rimless rounds. Accuracy should be better than the US carbine based upon previous testing loading jacketed carbine pulled bullets, firing them in the .30-’06 with same throat, rifling form, twist rate, bore and groove dimensions at similar low velocity. The smaller M1 Carbine case, having less capacity should be less sensitive to powder positioning also.

Barrel breech is machined to receive a US M1 carbine rear sight. Muzzle has integral base machined for a US M14 front sight. A half-rail with Picatinny base is installed onto the barrel, affixed with epoxy and 3 screws to permit scope use for load development.

Barrel length is finished at 21 inches. Overall length of the rifle is 36 inches at 5 pounds. 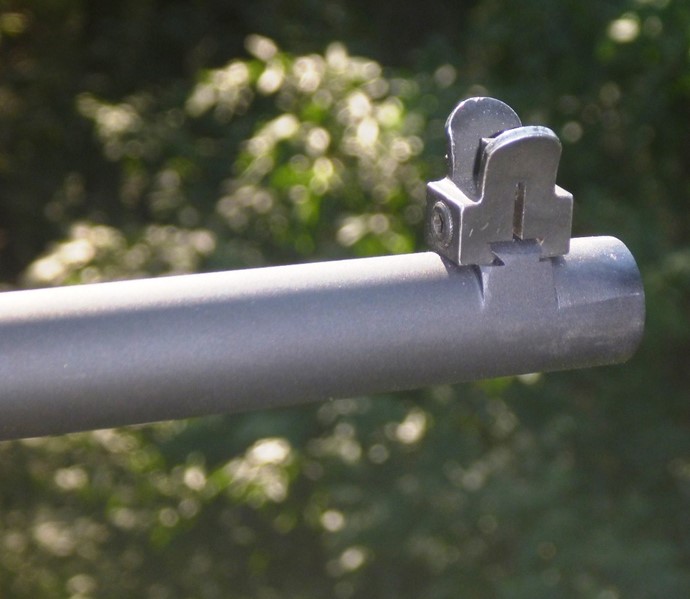 Yes, the 30 Carbine cartridge will do the job out of an M1 carbine if put in the right place....even with the military FMJ bullet but better with a SP or HP.....

I carried and used and M2 carbine in the late SE Asian war games.  Never used it on rock and roll for serious social purposes as I could work my trigger finger fast enough on semi.  At the close ranges used (under 100 yards usually) center Xing Nathanial did the job.  Have had my own M1 carbines since '66 and have killed 7 deer, quite a few feral goats, a bajillion jack rabbits, numerous coyote and other sundry critters with 110 SPs, HPs and 100 gr Hornady HJs and a plethora of different cast bullets.   It can be an effective 300 yard PD weapon if loaded right.

When I saw this post this morning,all I could say is Ed’s done it again.I like the idea of small light pistol calibre rifles and being able to use different rounds in one rifle is better still.Looking foward to his results with the project.

As well a big thank you to John Taylor for the gunsmithing.