I just wanted to share a picture I took a couple of years ago. It reminds me to count my blessings as an American and to try to maintain a sense of humor.

David if this is inappropriate, I'll erase it. 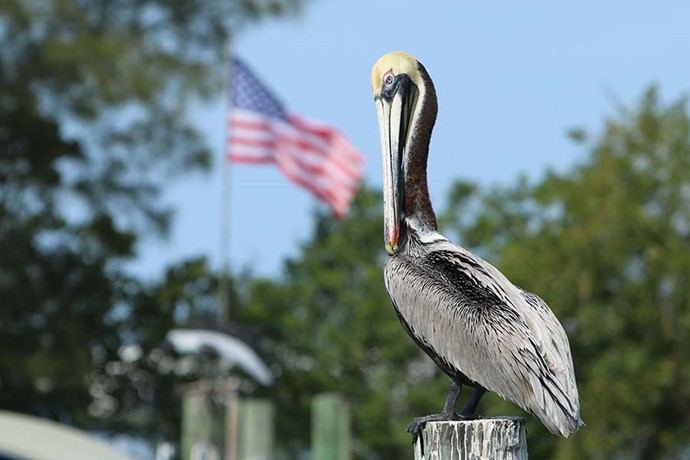 very nice in many ways .

We need to be reminded every now and then.

If this is erased then so am I.

There is never anything inappropriate about being an American. I just wish all would be so proud.

It almost appears that the pelican is looking at the viewer, and asking something like "You do appreciate what it means, that flag over there, right?"

Sometimes it is a little harder to count our blessings during an election cycle but come Hell or high water, we still get to vote - every time - maybe more than once in Chicago

. That is more than most countries can say. I like your interpretation of the picture.

In no other country in the world could I have progressed from a share-cropping farmer's son to a project manager in aerospace, raised a son who put himself through college and became his dream of a Soil Scientist for the USDA, and then he raised his daughter who is now working on her Doctorate in Chemistry.

In three generations, the family has moved far from shoveling manure, even though I still miss most other farming experiences.

The opportunity for advancement is something that cannot be quantified. We have freedoms undefined in other countries.