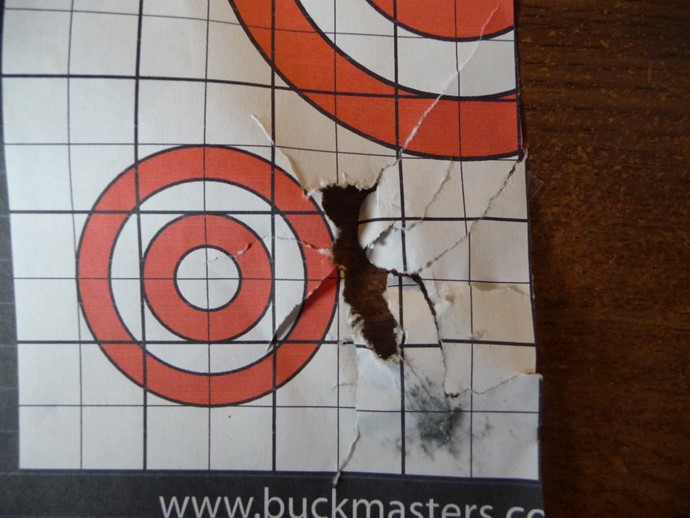 Says 5 shots, but I agree that it looks like the rounds are tumbling.

If you measure center to center that group is just a little bit over 1 inch. That LEE round tears paper pretty well.  If they were tumbling you sure wouldn't get an almost 1 inch group. Besides how would a short 130 grain bullet tumble when fired from a 10 twist barrel?  I shot that group. The load is 40 grains of H4198 in a military 7.62 case with a Wolf large rifle primer and BPI shot buffer. The bullet was checked with an aluminum gas check of my own making.  The lube is also my own lube which to simplify is basically a beeswax/vaseline/soap lube.

great group ... the guys have been trying to stir up interest in AR type cast shooting ... maybe this will add to that kindling ...

Not all the standard canister powder will give you over 3000 fps with a cast bullet of that weight, thus reason I chose to try 4198 first. Probably what surprise me the most is I had the bullet cast up for use in a M1 carbine and they weren't my normal alloy that I use for larger rifle cast bullet shooting.  The surprise came that they not only held up to the pressure and velocity, that they actually shot very well. I've have since then cast them up of my "regular" alloy which is 50/50   ww/lead water dropped, but  Ihaven't got out to shoot them yet. I'm also comtemplating to trying this load in my Browning A Bolt Boss varminter to see how it may do.

Yes the load burned very clean and the bore looked very good after pushing that bullet to that velocity.  Now i'm wondering what it may do on varmints at that speed.

Just a word of caution before anyone jumps out there and duplicates starmetals load.  I duplicated it in February 2015 and velocity and pressure tested it.  Be advised it runs 62 to 66,000+ psi.

Also be advised the target posted is cropped.

The Hornady manual goes up into this load range with 110 gr jacketed bullets. Lee goes to 27 gr of 4198 with 130 gr cast for a MV of about 2450 fps. I have a few hundred of the Harris bullets lying around so perhaps a small project.

The fact that the rifle is an AR10 seems purely coincidental in this case. The velocity and pressure are what makes this interesting.

I would like to see all of the targets or at least 4 five shot groups from the same day as accidents can happen.

Gentlemen I stated that I fired that load in an AR 10. I used the LEE 120R which mold number is 90364. LEE states it as a 120 grain bullet, but with first alloy I uses, inaddition to the lube and gas check, mine weighed just under 130 grains. With that said my AR 10 has the 7.62 NATO chamber, not the 308W chamber used  by LMG and also my alloy wasn't #2 water quenched. That's much harder then what I used. Then there is the fact that the AR's suck up much gas to operate.  Firing the same loads in various bolt rifle with the same barrel lenght as my AR 10 the velocity was much higher in the bolt rifles. So work up your load in your rife even if it is an AR 10 with the 7.62 NATO chamber.

LEE is pretty close with the right alloy, but my new alloy is much lighter.  Here's a pic of the bullet on the scale. 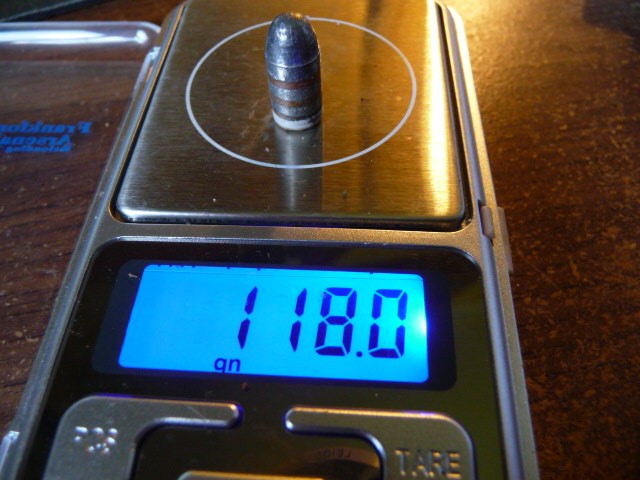 If there is anymore petty bickering in this or any other thread between the parties, whom know who they are, I will delete the comments and ban those members from the forum. Don't temp me, I don't want to hear any more. Period!

I have an update. As I mentioned I wanted to try that LEE 120R bullet out of my Browning A Bolt varminter. I'm just doing test loads to see what I'm working with.  The load I tested was 39.0 grains of H4198, .500 CC BPI shotshell buffer, the LEE 120R bullet that I've previously posted cast from 50/50 alloy (wheelweights/lead), CCI large rifle primer, and the case was a Canadian 7.62 NATO.  The velocity was 3058 fps.  As I mentioned the AR uses a huge amount of gas to operate it's DI system and it's evident here as this load is one grain less powder then what I shot in the AR 10, but yet gave 47 fps more velocity.  I have posted two pictures here of the head of the case showing the primer and a side shot of the case showing the web area. The case shows no signs of excessive pressure, the bolt lift was as though there wasn't a fired case in the chamber (remember the A Bolt has a harder 60 degree bolt lift), the case literally fell out of the chamber. Yes I know that these are lab grade test, but you know what I mean.  So this load is a go and I'll be trying it out soon. 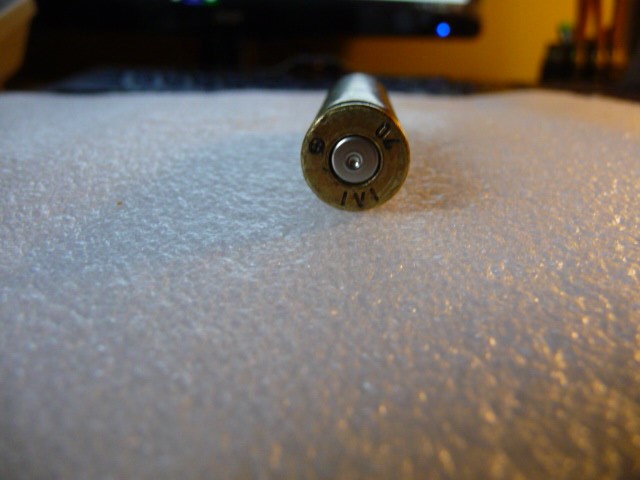 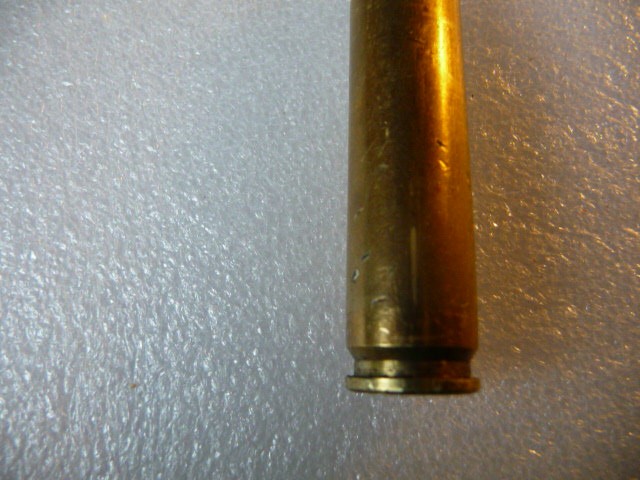 The classic one good group photo. I admit than I was also bad about posting pictures of one good group. I find that I post less often now.

Actually I shot more then "one" good group. I shot enough good groups with that AR 10 and the original heavier softer bullets I had used, that it prompted me to cast more bullets up using my normal alloy.  Well they set for years until 45 2.1 urged me to get back with it. So like I posted today I was testing a load, but this time in the Browing A Bolt.

You know, not to be a smart a**, but is there some kind of book out there that has all the rules for how you post on gun forums? You know like how many group photos you have to post? What happen to trust and honestly.  I've had people on other forum want to have ABC, CBS, and NBC come out to my range and do a video session of the whole process.  Yes I'm exagerating, but I did have forum members wanting to come to my place and "verify" what I had done.  That arises a question in my mind, how the heck do the postal matches with the CBA work with that much mistrust?

So yes I can understand how you post less often now which has become a trend now on almost all forums including this one. I thought maybe I'd sign up here and start anew and try to pass on some of the things I've learned and done.  It's proving very difficult.

We'll see how this Browning does and if good I'll post more then one target.  If not I'll tell about what it did.

starmetal: This may be just a guilty by association kind of thing. Your partner did start this thread just to take a jab at another member. I for one, am interested in your work with the light bullets. I own the Lee 120gr. mould and the 113fn that are the same bullet just RN & FN I'll start a bit lower in charge and work up using a gas check and powder coated bullets and see how it works in my Savage model 10. Fast and low recoil are things I like in a cast bullet round. Thanks for posting. Gp

It is and will always be difficult.  There are always nay-sayers out there who will not believe that anybody can do better than them (we seem to have fewer here than some other places).  I hope you enjoy the Forum.  Brodie

First thank you Old Coot for the kind and encouraging words.

GP Idaho yes by all means start lower and work up, after all your rifle is different then mine.  I started lower then the 40 grains of H4198 that I used my AR 10 because I was a little apprehensive that it might create much more pressure do to having a 308W chamber instead of the NATO chamber and also because the AR 10 sucks up a lot of gas to operate itself.  I keep records with all my rifles and I also have a M1A National Match that I compare a lot to the AR 10.  Even the M1A gets higher velocities with the same loads then the AR 10, so you can see my concern with the Browning bolt action.

Like I mentioned I'll post what the groups are with even they aren't better then the AR 10.  My AR 10 is a shooter.  It loves the 30 Silhouette bullet that 45 2.1 designed.  With match jacketed it's a single holer shooting better then many of my bolt action rifles.

45 2.1 posted the target and started this thread because I told him if I find that damn target I'd bet him he wouldn't post it. By God he did so I have to pay the consequences  of following and posting and telling you members what I did.

I hope to get out soon to test the Browning, but darn if they aren't predicting rainy weather which we have gotten too much of already this spring and summer.

I'm sort of jumping this thread but I'd like to pass along that Palmetto State Armory has a very good deal on now for AR 10s. Complete uppers with BC for $399.99 and lowers for 159.99. Have to see how things shake out this week but I'm sure thinking about it. Gp