I just annealed about 100 30-30 cases for my 788 Rem. I was taught to place the cases in water, about half way up, heat with a propane torch until the necks turn a dull red, and knock them over into the water. I see some don't tip the cases over into the water, letting them cool naturally, and some shooters use other methods to anneal, such as holding the case in hand, while heating, and when too hot to hold they are done. Is there a best way to do this? Or doesn't it matter. I am sure this has likely been discussed before. Just would like opinions, for future reference.

Dull red is now noted as being a tad too hot.

Have you seen this blog I did?  Equipment is expensive but for a club it's a good idea.

Thanks Jeff, but that's a little above my price range.

Actually copper bearing alloys are annealed by heating followed by a quench.  Why this will harden steels but soften copper and brass I don't recall right now, but, it is considerably better to quench the case rather than just let it cool without knocking it over.

Goes without saying that you take measures to make damn sure you don't try to anneal a case with a live primer, and as always eye protection is a damn good idea.

I definitely deprime before annealing. I don't like sudden noises.

Annealing brass has nothing to do about water quench or time. The only factor in temperature. The only reason to put cases into the water is to insure that the case head never gets about 100 Celsius. 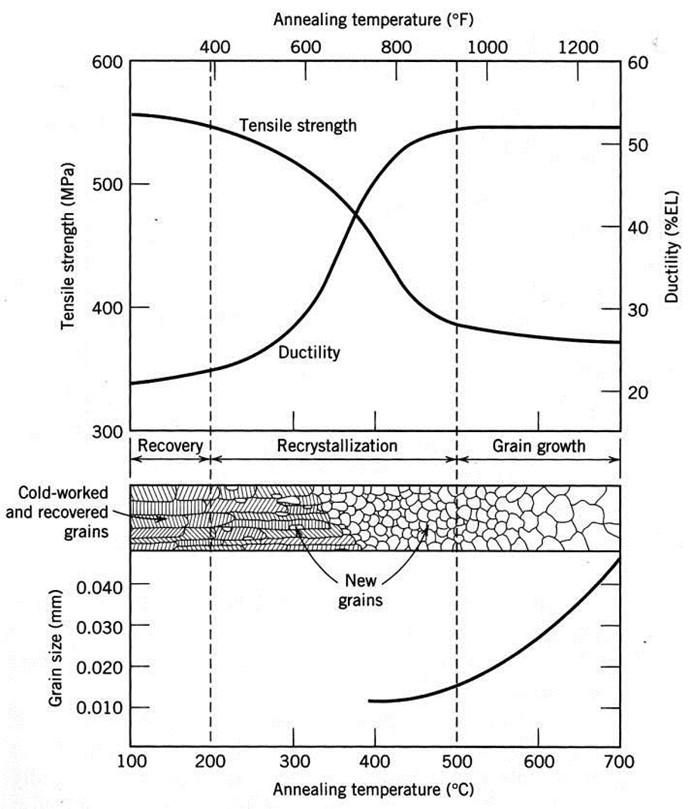 Do you know about where on your curve the factories anneal new brass after case forming?

John, Nope and there may not be any standard. Ed Harris may know from his time at Ruger and work with the military. Ric

Talled to Starline about annealing the day before the last CBA Nationals. I had several questions and their production engineer spent the time with me. I was greatly appreciative of his time and knowledge.

Given: My uncles toured the W-W Alton factory based on their experience as competition shooters and reloaders. The plant officials were not eager to give tours until they realized the two brothers shot thousands of rounds each year. They noticed annealing was done on a line in gas jets and the line continued for several feet before dropping off to air dry.

My first question concerned air or water dry. They were strong on water quench for the reloader because this is a reliable constant. They have gauges to sense the temperature and monitor these all day long. Either method is workable, but the average reloader does not have the gauging to correctly monitor.

The next discussion concerned my frustration at making .25-20 brass from .32-20. I told them my first lot of their .32-20 formed to .25-20 easily several years, but the recent lot gave me three collapsed shoulders out of the first ten. I stopped knowing I was going to be able to talk to them within two months. They said their brass is shipped from the factory in a range of hardness, I possibly had the extremes of the upper and lower hardness limits. They stated they were having the same problem forming .25-20 as an experiment and the production was not economically feasible for a production facility. They recommended an intermediate step and discussion soon found I had a 7mm BR die that would work.

Tomorrow morning begins the quest to anneal 300+ .308 Lapua brass for Alice this coming season as it has work hardened. Then  300 .32-20 brass for sizing to .25-20 to assure adequate brass for the coming year of competition and the Quarter-Bore matches. .

I form .17 Mashburn Bee brass from .218 Bee--25-20 & from 32-20 also. I made all of my forming dies myself. and after lots of testing and tweaking of equipment I can turn out a near perfect case even before it is fireformed. This is quite a change in case dimensions and shape and you have to leave the head and web alone. I don't care what people tell you to do-use the water quinch method. It's nice to talk about high tech equipment and sensors and such but how many people have access to this equipment. Templac costs money and takes time to apply. I have been annealing cases for about 55 years and have never ruined a case. My trick to getting the right heat color is- I turn nearly all of the lights off in the shop and get my water pan over in a dim corner and  start too work. It is so much easier to read the colors in dim light. Most of my case forming is for wildcat calibers so I anneal a little below the shoulder. When my water starts to get hot I pour it out and put in fresh cool water. As the water gets hot it will effect the degree of hardness on the case that you are working on.Keeping the water froom getting too hot will keep you from over heating the case head and webb.

You are absolutely correct about new cases being drawn out to different degrees and different brands will vary from another.

You can take what I just told you to the bank

Mashburn said: " Keeping the water froom getting too hot will keep you from over heating the case head and webb.

The case heads and webbs wouldn't seem to be in much danger. Even boiling water in the open only gets to 212 F and even the slightest annealing doesn't start until the temperature is over 400F (Ric's curves)? Are the curves wrong?

I use a circular head torch that I bought from Todd Kindler (the reloading den) years ago. This could be easily made by drilling holes in a Cooper pipe and bending in a couple inch circle.

I turn the lights off and when I see the case just start to glow I deduct 1 second from my timmer.

I do not use water. The case head never gets near hot enough to cause problems. I look for the discoloration of the case like factory cases.

I work @ W-W Oxford. I can tell you my process is much tamer than the factory

John, Unless the P.E. metallurgy site is in error, I would trust that graph. Ric

getting a constant temp on the brass is very important. Going by looking for color change gives one a big variable in temp of the brass being annealed. I have for years used Tempilaq liquid from Brownells. This is a temp sensitive liquid that one brush on the inside of he neck. The case is rotated in the flame and when the Tempilaq turns clear you have reached the temp that it is specific for. It comes in different temp ranges. Do a couple of cases and note the time needed for the Tempilaq to become clear, on subsequent  cases keep in the flame for the amount of seconds from the trial cases then remove when it becomes clear.

A couple years ago I went to using the Anneal-Rite system https://cartridgeanneal.com/ . The only difference is I use the Tempilaq only once, counting till it changes color or melts at 750 degrees. I then keep a log of the time or count to use for future annealing of the same cartridge. It is a pretty fool proof system and I can do about 10-20 cases a minute depending on the time for each case which is usually between 2-4 seconds.

Just read the Fred Barker method.  That is so simple even I could do it.  Now I just have to talk my wife into some romantic candle light time and I can get twice as much done!

Multi-tasking at it's best!

I just tried the candle method on a 100 30-30 cases. Holding the case back towards the rim, I held the case neck under the flame, rotating it, until the case was too hot to hold. I placed the case on a tray, and proceeded to the next one. I wiped the soot off the case necks in the tray, when I was done. There was the typical discoloration if the cases, indicating something happened to the metallergy. This system works pretty well. I have lots of candles. A lot less messy. I don't know if this method works as good as the propane torch and water method, for quality of the annealing, but is is sure a more desirable procedure.

Way too long ago to remember I read somewhere to hold the case by the rim and dip the mouth into your lead pot when it's up to temp. When it gets too hot to handle either drop into water to quench or air dry. I think that the world has probably moved on since then, did hear they were inventing copper things to go around a perfectly good lead billet.

that candle method sounds very interesting. when making 8x50 m95 cases out of Russian 7.62x54 cases, I mounted a shell holder on a yard sale egg beater. it holds the shortened Russian case while I rotate it over a propane torch. very even heat. then drop in water. add a primer, charge of unique, tissue wad, then cream of wheat. case plugged with candle wax and fire formed in my m95.