What case cleaner and what to put into it

I admire my friends' like new shiny reloads but have never thought cleaning cases was necessary. I wipe the soot of the necks with steelwork and call it good.  I am thinking about mending my ways -- at least some of them.

I don't process bucket fulls of cases. I like to keep track of how many times a case has been loaded, so 100 is about the maximum and more likely 50. So I don't need the 300 horsepower modal.

Should I buy a tumbler of one that buzzes?  Which ones don't break early?

What should I buy for medium?

I will appreciate any advice.

It will make the brass look like new in about an hour or two depending on how tarnished they are. But it really works fantastic. I can't tell you how surprised I was after the first time I used it. Nothing is better.

Here are some links to the tumbler package and magnet.

John, I bought the cheapest Midway vibrating one maybe 25 years ago and it still works (never run it on a carpeted surface!). Like you, I only do batches of normally 100. Started out with Lyman corn cob, but went to pet store lizard media (crushed walnut hauls). I use a 1/2 teaspoon of Midway polish restorer one a year. Plus I put in a half sheet of used dryer paper. That lasts for maybe two years or 1200 cases. I run it overnight in the shop so don't care how much noise it makes. FWIW, Ric

I use a vibrating case cleaner with water, dawn dish washing detergent and lemi-shine dishwasher cleaner. 20 minutes and the cases are clean. Shake cases in a towel and air dry. If you want them nice and shiny tumble them with harbor freight medium grit walnut media blaster. My first case cleaner was an old gem tumbler I bought at a flea market. It works as well as a vibrating cleaner.

The problem with tumblers or vibrators w/ walnut shells, corncob, or similar media is they take so long and have to be restored often. The media gets really dirty as you can imagine and makes handling dirty also.

If you ever try the tumbler with the ss pins and water solution, you will be amazed at the difference. To me it's like night and day.

No I don't own stock in them or get a kick back, but after 40+ years of trying all the methods, I don't want people to know what they might be missing. Plus right now they are about $40 cheaper than when I bought mine.

in our production shop we ran several midway buzzer pots and 1 rcbs mini-bucket tumbler for our small products.  all would last a hobby brass polisher a long time, but the RCBS tumbler was less irritating to the ears ...  .. and never wore out, although the rotating mating surfaces became slick after about 2 years of nearly constant use.  you can buy extra barrels for the RCBS, and they are quick-change.

BTW, cheapo me went to the local Acme store and bought a sack of SS brads to try that trick ... oops, the sharp ends made little scratches in the product. the points never rounded enough to stop scratching.  if you like sparkly cartridge cases though, these would do it ...

+1 on David’s experience with a tumbler, not a vibratory type unit. I’ve gone through (3) vibratory types and after my large Dillon died, I decided to try a rotary tumbler.

I have a Frankford Arsenal tumbler and with water and stainless steel pins, the cases look really good! However, over on the Shiloh Rifle forum, there is a thread running about the same subject. After learning of the results with ceramic media, I ordered some from Buffalo  Arms. I plan to mix it 50/50 with pins.

So far I have only cleaned cases that used black powder. I think that is a tougher task than cleaning smokeless cases.

NOTE: The caution here is I only use steel pins on straight cases. I've found a soap bubble will encapsulate a steel pin and dry with the pin. This can be disastrous with a bottleneck case. Each bottleneck case gets two separate inspections a day apart.

This is why the magnet is so helpful. It will pickup cases with any pins inside. Also I use a rotary hand tumbler anytime I do bottle neck cases. But this is a good caution that some people may overlook.

I will agree with Riicin Yakima on the best choice for cleaning brass. I bought a vibratory cleaner from Midway in the mid -eighties, one that came with two lids, one clear and one solid. Why you need a clear lid, I don't know. As to it's long lasting durability, it should be put in the Smithsonian. I had been using it for over ten years when I read some where that certain serial numbered of these had been recalled because of possibilities that they could catch on fire. I checked the number on mine, and sure enough mine was one of those to be sent back. I thought If hasn't caught on fire by now that it probably wouldn't. After that when I wasn't in the shop with it, I would set it outside on the concrete. From then on I set it outside to do away with the noise. Back in the good ole days when it was allowed on Ebay I was in the reloading component business. I sold on Gun Broker also but items wouldn't bring near as much as on Ebay. At one time I hauled in a pickup load of used brass in sacks ,all of that was cleaned with my midway vibratory cleaner and that much doesn't make but a small percent of the brass that it has cleaned.

You can spend a lot more money on higher tech cleaners, but myself, like the old saying, "he's tighter than Dicks hat band" definitely describes me .I took some 1X4's and some hardware cloth and made a square sifter. When I take the brass out of the vibratory cleaner, I pour it into the sifter which I have setting in a larger box. With this setup you can really rattle the cases around and they come out pretty Dad gum free of dust and media.

As far as media, I use walnut shell with some polishing compound added. I have corn cob media but hardly ever use it, it's too slow. I will at times put cases in corn cob media after the walnut shells. When the media wears out it makes very good filler for shooting bags. Another thing, make sure you look in the primer pocket and make sure there isn't a peace of walnut hull in the flash hole.

the ground corn cobs is way too slow for polishing ... but

it makes a great cartridge filler for that rare crazy idea we all get ... i am using it now in my blackpowder plinking loads, more filler than powder.   maybe helps keep the barrel clean ....

Thanks to all for sharing your experience and opinions.  Will let you know when I have some case cleaning experience to report'

I have an old 2 barrel tumbler that is set up to hold an applesause jar, the plastic kind with built in handles and a canning type lid. Very leak proof. I fill it half way with brass, then 3/4 full with water. I add about a tablespoon of Dawn and a half teaspoon of powdered citric acid. This setup will clean the brass very well but will not polish it. Too much citric acid will make your brass pink so only a little is needed. It's hit or miss if the primer pockets clean up. Since the container is clear you can see when the brass is clean. When done I dump the brass in a colonder and shake it under hot water to remove the soap. Then it goes on a towel where I roll it around and then I put on another towel to air dry. The whole process takes less than an hour. Like I said the brass is very clean but doesn't have a high shine.

Like others here, Frankford Arsenal SS pin tumbler, Blue Dawn, and a dash of lemi-shine.  I only do this once a year, and normally combine it with an anneal job and a full length sizing - I find that this routine in combination with wiping the brass down immediately after firing each string works fine for me. 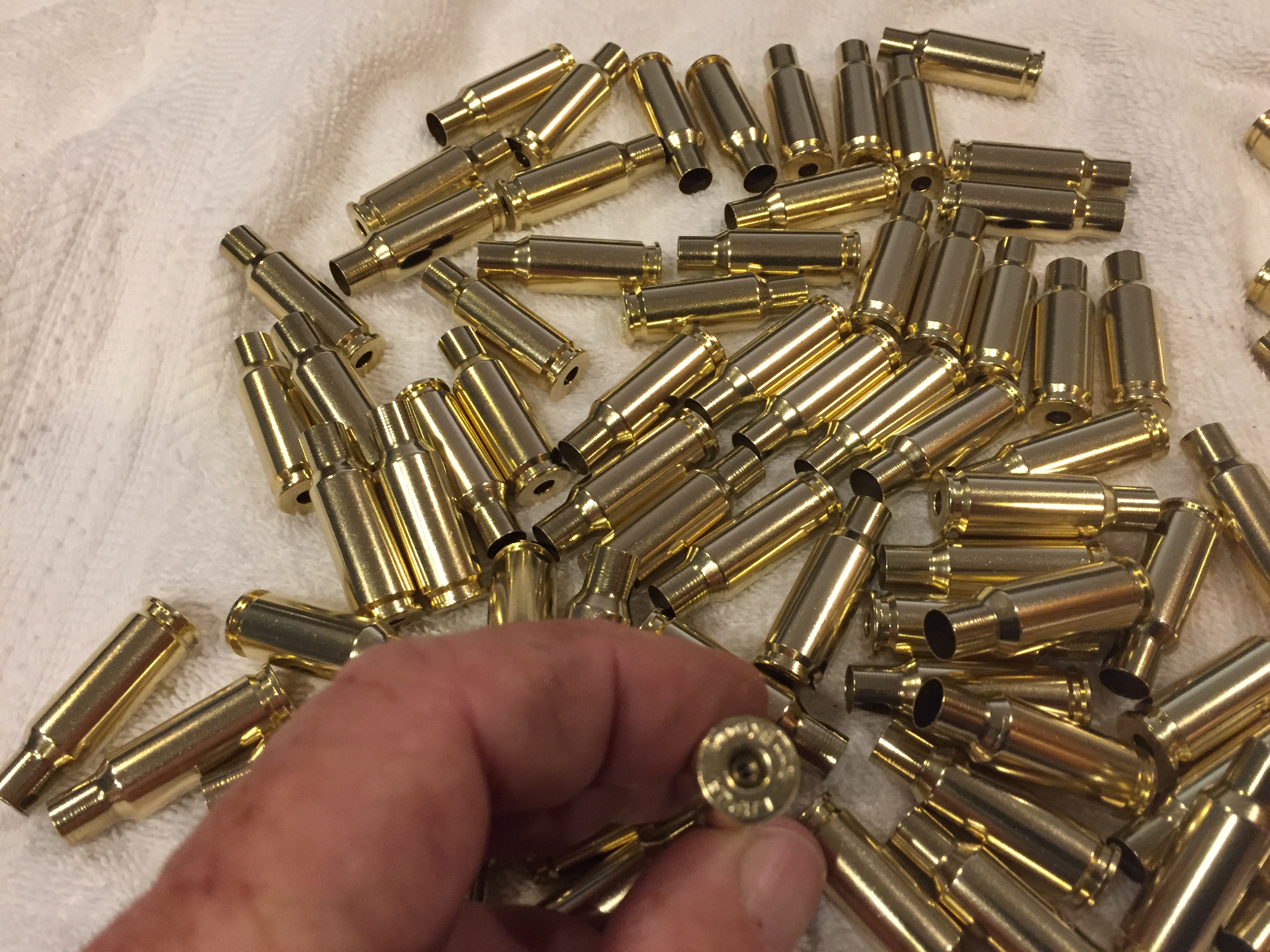 It is interesting in that the only hangfires and misfires I have ever had since I started reloading fifty-some years  past were due to tumbling my brass.  The darn ground peach pits would stick in the flash hole of my 458 Win. brass and cause them.  Today I only tumble my semi-auto brass because I want to get the grit off of it to keep from scoring my carbide dies.  The rifle brass I shoot, eject, and put back in the box to be reloaded.

I have a 1996 year model RCBS rotary tumbler and it has never failed. It is filled with 5 lbs stainless pins. I seperate the pins from cases by dumping cases and pins in big fish fry strainer and shack cases in large bowl of water. It's lots of work ,but fun. Unnecessary maybe....?

Brush primer pockets and inside necks before tumbling in pins for best results. Kind of like washing the dishes before putting the in dishwasher.😟

Brush primer pockets and inside necks before tumbling in pins for best results. Kind of like washing the dishes before putting the in dishwasher.

My Frankford tumbler cleans my primer pockets and necks without any pre-brushing.

By the way also our dishwasher needs no pre-washing, baked on, dried on, etc., they come out clean,

I started out using a Lyman 1200 Turbo vibra polisher and I use the pet store reptile bedding crushed walnut hulls. (Lasts a long time) Later I decided to get a Harbor Freight rock tumbler, I run it about 2/3 full of hot tap water, add a long squirt of Dawn dish soap and about 1/8 to 1/4 teaspoon of Lemi-Shine dish washer cleaner. (Citric acid) I tumble the brass int the HF tumbler for 30 minutes. Then after air drying, I tumble it in the Lyman with a capful of each Nu Finish car wax and paint thinner or mineral spirits. I only add the wax and MS or PT as needed. When the media is dry again I tumble my brass from 1 to 3 hours. It comes out as clean and shiny as new. I know it's not necessary for the brass to be this clean to reload but it is much easier to inspect.

I dry my cases in a wood box that is a bit bigger than a cigar box.   I fill the box about three quarters full and use the wife’s hair drier.  It takes about 10 minutes and the cases get really hot. I have loaded them right after and have never had a problem with moisture in the case.  I usually leave them overnight in the box after heating.