Well what an interesting topic. I keep seeing some replies to another Trail Boss topic about is it an underappreciated powder.

Well, owning a Corvette can be disappointing if you purchased it hoping to get the same performance of a Bugatti Chiron.

Lets back up just a little bit and go over to the Hodgdon website and see what they have to say about Trail Boss.
https://www.hodgdon.com/trail-boss/

Trail Boss was designed specifically for low-velocity lead bullets suitable for Cowboy Action shooting.  It is primarily a pistol powder but has some application in rifles.

Trail Boss is based on new technology that allows very high loading density, good flow through powder measures, stability in severe temperature variation, and, most importantly, additional safety to the handloader."

That should pretty much sum it up right there for anyone that decides to use this powder for anything other than what is was designed for. Trail Boss was manufactured to be a BULK powder to fill the cases of black powder cartridges like the 45 Colt and 44-40 cartridges. It was designed as a plinking load for Cowboy Action Shooting which has a velocity limitation. It was also manufactured to help prevent double charges in those same high volume cases.

1. Hodgdon has load data for such Cowboy Cartridges on their web site.

2. I also know that there is a Trail Boss Reduced Loads PDF floating around on the net were guys that shoot stuff like 243s, 270s, 308s....what I call exotic cartridges...can load reduced loads. What these guys fail to realize is what the title of the PDF says....REDUCED LOADS!!!

The PDF claims that using such reduced loads in such rifle cartridges are fun but I don't see how if accuracy and velocity is a problem. The Cowboy shooter is typically shooting 12 x 12 type size steel plates typically no further than  25 yards. Accuracy is still important but who wants to shoot a 308 at even as close as 50 yards....and at what? Again, Cowboy Action Shooting competition has a velocity limitation for competitions.

Hodgdon offers load data for rifle and pistol cartridges in their load data section of their website. However, if you can not find your "favorite cartridge" in their PDF "RIFLE and PISTOL" chart, they claim you can use a formula and stay inside safe pressures.

Here is my experience with Trail Boss in Cowboy Cartridges. I absolutely love it!

Here is my experience with Tail Boss in my 45 ACP pistols...I absolutely love it for plinking!!!

WARNING!!
When using such loads in pistols and weak action rifles, I highly suggest NOT USING the PDF loading suggestion.

I shoot the 44-40 exclusively. Hodgdon load data limits a max load to 6.5gr MAX to stay under SAAMI max pressures of 11,000psi (13,000 cup). Using the PDF suggestion, I can get 9.3gr in using a Magma type 200gr LRNFP bullet like Oregon Trails Lazer Cast. There is a tad but of "spongy" compression but not crushing the donuts!

Results from a 20" MGM barrel I use for strain gauge pressure testing.

9.3gr gave me a result of 15,182 psi @ 1,250fps with a ten shot group avg with a strain gauge.
I fear any crushing of the powder would send higher pressures through he roof!!!

Thanks for this post.  I guess the "secret" of using Trail Boss is to understand what it is and is not good for, then apply it (or not) to loads where it's appropriate.

I bought a can of this a couple of weeks ago, have not even opened it.

If I notice worse accuracy, significantly worse, compared to Bullseye and Unique, I guess I will be disappointed with the powder, but have some high hopes that it will work well in 32-20, etc. Maybe I can get off my butt and do an accuracy comparison in that round.

Some of this depends on if you have time and can remember to raise the muzzle before firing.  I have often found this reduces group size on reduced rifle loads like "bunny" 30-06 loads.  Having a load that is not position-sensitive is an advantage IMHO.

Jack said it very well:  "Trail boss is good for two applications: 1. Cowboy action shooting. and 2. Light reduced loads in rifle cartridges. ".  The latter should be very good as a teaching aid for younger shooters.

Why do we keep beating the drum that there must be another use for this stuff.  It works well in the applications for which it was made.  Face it .  The only other thing it might be good for is making illegal explosives with old pieces of pipe.

You can't make a silk purse out of a sows ear.

I seem to remember a HANDLOADER Mag article by M. Venterino on reduced loads using 5.0grs of TB in Military Cartridges.  He used a light bullet in .30 cal. Loads, last or next to last issue of 2015.

Don't have a light enough bullet mold to try them myself.

In the 2018 groundhog shoot we had 3-4 guys use TB in a variety of 3006 rifles. Most were using 6-7 grains since we were only shooting 50 yards. The RCBS 150 PB Cowboy was the bullet of choice. One guy used 14 gr of TB. That sounds like a bunch. I would work to that carefully with the TB case capacity formula. 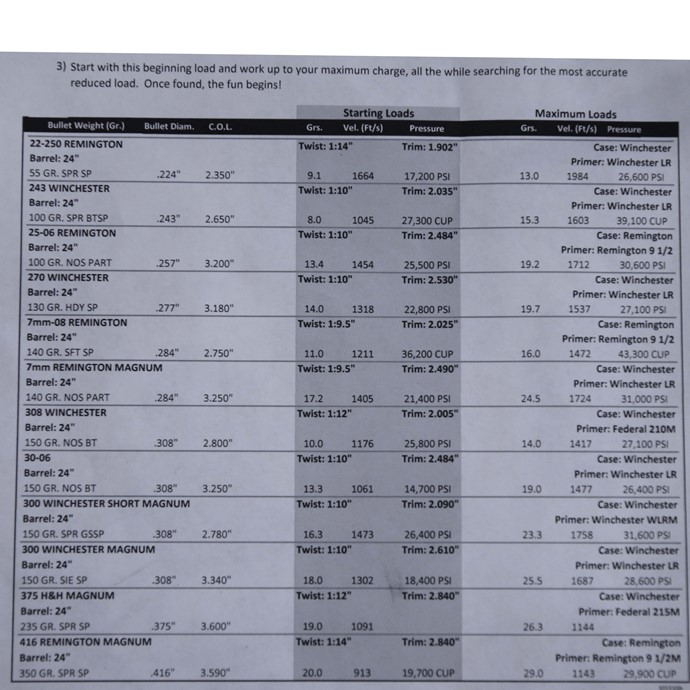 I found this Hodgdon/IMR table to be quite interesting. I used 6 gr of TB in my 3006. I am not surprised it was not very accurate. This table also seems to dispel some of the myths regarding bottleneck high intensity cartridges.

Worth remembering that TB was not created for us. As Ed Harris has pointed out it is a repurposed powder originally for 40mm grenade ammo.

I wish it had the burn rate of H4227 and similar or slightly less bulk.

I have used TB sucessfully in 3 different cartridges using heavy bullets. 30/06,308 and 35 rem with magnus 200gr rnpb bullets.Accuracy was around 2 inches for 35 rem at 100yds for 5 shots,velocity was around 1250 fps.I'dhave to look @ my records for powder charge.

Worth remembering that TB was not created for us. As Ed Harris has pointed out it is a repurposed powder originally for 40mm grenade ammo. I wish it had the burn rate of H4227 and similar or slightly less bulk.

When Trail Boss came out, one of my friends called their powder tech's and asked them if it was a remake of the hundred year ago bulk powders..... he got a yes answer.

When Trail Boss came out, one of my friends called their powder tech's and asked them if it was a remake of the hundred year ago bulk powders..... he got a yes answer.

How interesting....now which 100 year ago powder?

There were two types of bulk powder to replace blackpowder by volume.... one for shotguns and one for rifles. Do NOT use the old shotgun bulk in a rifle. But which one my friend says he could not get the tech to say any more about along with the statement from the tech saying he shouldn't have said even that. That is all we found out...............................

Having shot as much DuPont bulk shotgun as anyone alive today, I think,  the principles are the same. With shotgun shells and loading with an Ideal pocket tool, you measure the volume and drop it in the case. Put a over powder hard wad in and required felt wads and gentle press to the bottom of the case. DO Not compress! Add shot and over wad and roll crimp on using only hand pressure. All this compressing shot shells only started with "progressive" burning powder. Trail Boss has the same warning.

There were two types of bulk powder to replace blackpowder by volume.... one for shotguns and one for rifles. Do NOT use the old shotgun bulk in a rifle. But which one my friend says he could not get the tech to say any more about along with the statement from the tech saying he shouldn't have said even that. That is all we found out............................... 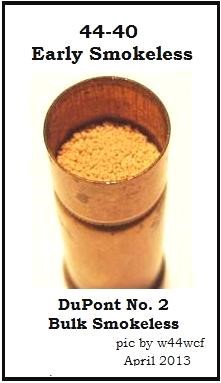 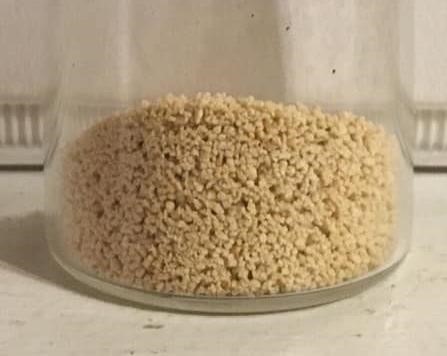 The second powder I believe to have been used would be Laflin & Rand's Smokeless Sporting Rifle Powder...also using 17gr for the 44-40. Both Dupont and Laflin & Rand bulk powders appear to be "blonde" in color. This powder was only available for a year or less when taken over by Dupont.

My testings with Trail Boss
Published 6.4gr max with an Acme Magma bullet produced 900-1000fps @ 7,224psi with great plinking accuracy but also did well out to 200 yards but may not retain enough energy for harvesting game.

In 1913, Dupont introduced SR80 (Sporting Rifle). It was a granular type powder. similar in appearance to Dupont No.2 smokeless powder but was faster burning and was not a "bulk" type powder. It's burning rate was in the same range as Sharpshooter. Sharpe's 1937 does not list chamber pressures for this powder.

“Sharpshooter” and "SR80" fueled millions of .44-40 smokeless factory cartridges up until at least the 1950’s (SR80 was discontinued in 1939) when ball powders began appearing on the scene. Winchester switched to a ball powder similar to the old W630 which also has a similar burning rate to 2400. Remington continued to use “Sharpshooter”. I recently dissected some Winchester Super X cartridges and discovered the same type ball powder with a 12.8gr charge. Winchester last offered this load in 1978, then in 1979 Winchester began using a disc shaped pistol powder of which I weighed at 8gr. This is when the advertised velocity dropped from 1,310fps down to 1,190fps.

My "go-to" powders that seem to equally replicate velocity and pressures and most importantly accuracy are;

These are the only two powders that give the greatest accuracy, retain energy (out to 200 yards and greater) and produce the least pressures in my tests.

Oh, I meant to point out that early Dupont Rifle No.1 smokeless powder in the red keg "dead stag" logo was a different powder than the later Dupont No.1 in the can that had the Laflin & Rand "Flag in Wreath" logo.

I recently inherited a Magnum Research BFR revolver in 45/70 being 65 and not needing to shoot full power loads I contacted Hodgdon and they steered me to Trail Boss. I am using a Lightning 300 grain LRNFP-Cowboy bullet on top of 14.9grs. of Trail Boss and it is very accurate and recoil is not bad at all and manageable.

Trail Boss does what it was designed for, fills up old black powder cartridges and does it well with no issues. I also started using it for 45 Colt and it will be my go to powder as soon as I use up the little bit of what I have left, I am also going to try it in 38 Special.