Hello: I am new to the forum. Sorry if this is a repeat question. I was unable to see if my question was asked before. I have reloaded cast bullets for handguns for years. I want to start using cast bullets in my Krag rifle and my 03A3 Springfield. As a general rule should I load so the bullets just touch the rifling or keep them back a little? These loads will be for target use. Thanks, sluggo

It depends on what the rifle likes. Some shoot best when the bullet is touching. Some don't. I have two 98 Mausers and a 1903 Springfield that I use for the military  matches. all of them shoot the smallest groups when the bullet does not touch the leade.

There is no set rule. Starting out with a "new to cast  rifle", initially I seat the cast bullet off the rifling  and then experiment with the OAL from there. Just one of the many variables that you have to experiment with to find out what your rifle likes best.

Thank you. This is not usually a factor in handgun loading. I have a starting point for my rifles now.

I can't help you with the 03A3 but my friends and I shoot Krags in informal matches. It seems that the preferred bullet size is .311 and heavier bullets ( above 150 grains ) shoot best. We keep them off the rifling but the rifle will decide how much. Mine likes around 1/32 of an inch.

Thanks. I have 2 molds that I can size to .311 for the krag. A 200 grain and a 220 grain. They both use gas checks but I plan on keeping the velocity around 1600 to 1800 fps. I will start with your suggestion and keep the bullet off the leade. Thanks again.

I am confused by the answers given in this thread and could use some help in understanding.

Are we saying that the front driving band doesn't touch the leade or talking about a different bullet design? I may be the only one confused (it has happened before) but I doubt it.

I have no experience with 03's. In my Krag, I use a 180 gr. bullet intended for 303 British. Comes out of the mold at .314 and I size it to .311. The nose portion mikes at .303 -.304. You cannot start the nose of the bullet into the muzzle and a long loaded cartridge will definitely show marks from the rifling. I don't shoot in the CBA Military Matches but my system is plenty good enough for my informal matches. Hope this clears up any confusion.

"Are we saying that the front driving band doesn't touch the leade or talking about a different bullet design?"

Back in the day, all the best shooters of single shots breech seated their bullets and used the same case over and over. A good friend who owns many Pope rifles still does it that way. 50% more accurate than fixed ammo.

IME when using bore rider bullets, best accuracy is when the bullet engages the rifling. NEI made many bore rider molds with what the called a "DD". It was a driving band designed to engage the rifling. I have three of those in 30, 35 & 40. All are very accurate. 40 caliber results in a No. 1 450-400. You can see the band on these wheelweight bullets lubed w/SPG. 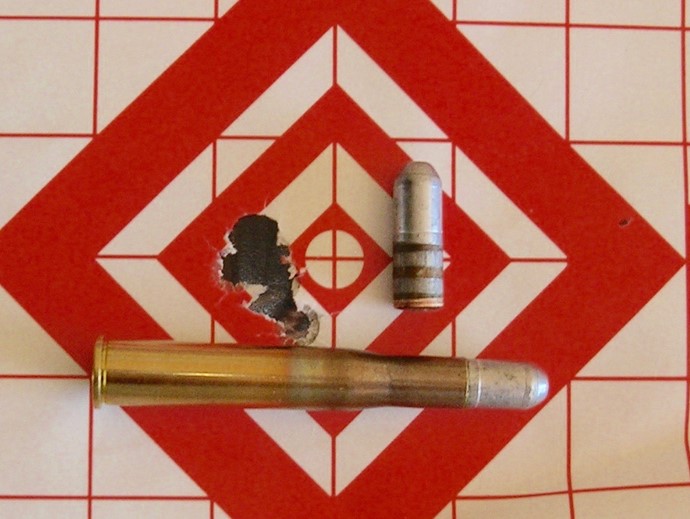 "Back in the day, all the best shooters of single shots breech seated their bullets and used the same case over and over. A good friend who owns many Pope rifles still does it that way. 50% more accurate than fixed ammo."

The CBA has a class for the Schuetzen (plain base breech seating) shooters and these shooters are still around. They are sometimes the biggest class at the CBA National Tournaments. Our two rifle classes allowing gunsmith built custom rifles, as with the plain base shooter rifles, display about equal accuracy.  In fact the national records for Heavy class (14 pound limit) and Unrestricted class using fixed ammunition are better than those for the plain base class doing breech seating in most categories.

The top rifles and shooters in all three classes are capable of Averaging about .5 MOA for four five shot groups at 100 yards.  Of course the records are much smaller than 0.5 MOA because the records are set by rare events not the true average capability of rifle and shooter.

Anybody who thinks that 0.5 MOA isn't  top shooting for cast bullets has been reading too much on the Internet.

Hello: thanks for the replys. I am trying to post a picture of the bullet I am loading but I am having trouble doing so.