How do you explain these two shots?

We had our first CB military match of the year last Sat at Wind Hill and the weather cooperated with temp in the mid 20s and sunshine. I had only two of the record 40 shots outside the black but they were way outside. My theory is that I had some of one powder charge hang up in the measure and then it added to the next charge. I do look in each case after adding powder to make sure they all have what looks like the same amount. I hope the photo shows up as I have never attached a photo before. This is the last target at 200 yds and was shot with my Swiss Vetterli in Big Bore. 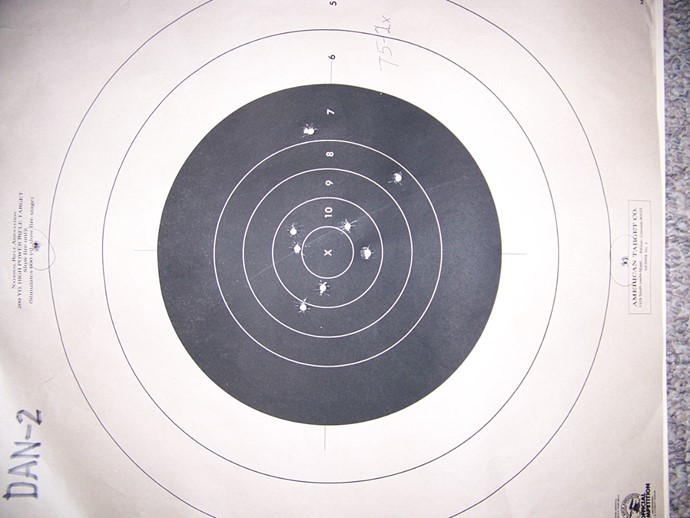 Actually it was Blue Dot, last summer I worked up a load with BD that held up in the heat and wondered if it would work in the cold. It appeared to work just fine except for those 2 shots.

For what it is worth I have read that Blue Dot is very sensitive to cold temperatures and becomes unstable? I can't tell you where I read this, too many years ago but it might be worth looking into. I'll look around and see if I can come up with some concrete information on this.

I just did a quick search and if you go to www.okshooters.com/threads/temp-sensitive-powders.2525091 there is a thread about some of this and there is more if you want to look around the e-net.

My experience with blue dot is that it does not meter very well.  I use a small dowel and with the first weight measured powder charge I put the dowel into the case and mark it just above the case mouth.

With blue dot or other flake powders I bump the measure several times when filling the powder chamber and once or twice when dropping the charge.  Each case then gets dip sticked with the marked dowel.  Its easy to tell light or heavy charges with the dowel.

This is with bottle necked cases.

Wow. That is what true fliers looks like, and almost exactly the same distance out in opposite directions.

One might think that if the powder hung up and dumped in the next case causing one light and one heavy charge, the two fliers should not hit at the same elevation. But strange things happen with cast bullets.

My theory is that it had to be one of those Wind Hill evil fairies that ride bullets -- one with a sense of humor.

These shots are too far apart to be shooter error. There are several possibilities, powder breaching in the measure with velocity variation, barrel warming causing impact change from the outside temperature, and lubricant purging due to the lower temperatures.

You did not mention where in the string these shots occurred to eliminate lubricant purging. Also this will not show the barrel warming. And lower temperatures would amplify the impact of lubricant build up.

And I am assuming the target is shown as 90 degrees turned since the name and the printing are sideways. This leads to the discussion of velocity variation due to the measure bridging with one lighter charge and one heavier charge. This theory will explain the impacts being equally low and high. However, if the target is shown as shot, then i go back to lubricant purging due to the cold temperature.

If the target is turned 90 degrees, I'd go with the powder measure bridging.

it would be interesting to purposely try 2 .. or 3 ... loads of blue dot a grain or so apart ... and see if the impact actually goes 4 or 6 inches astray.

the burning rate of blue dot would seem to be just right for cast bullets ... yet we don't see it used a lot ... maybe there is a reason for that ?

the only time i have got wild flyers .. REPEATABLE  ... was from barrel condition ...  we are talking 8 or 12 moa flyers !! ...  i have no idea how barrel condition could cause wider flyers than a bent bullet or even the wrong cartridge ...

I would lean toward the powder bridging scenario but I would expect a charge variation sufficient to cause that big a miss would have also produced a noticeable variation in report/recoil.  Or maybe not so much in a big bore.

Yes, the photo has the target turned 90 deg, it was shot with the top of the target at the top of the frame. This was my first time shooting the BD in the cold but Stan has been shooting BD all year around with no problems. This load shot a couple of records last summer and as you can see it was shooting great. With these cases seeing the level of powder in the case is no problem and I will be looking a lot closer in the future. This load is only about 1150 fps and when I get some range time I will try a lower and higher load to see if I can duplicate this. These shots were 10" high and low at 200 yards. In fact I only had one of the 38 good record shots that was a low 7, all the rest were in the height of the 8 ring.

The low 7 was shooter error but misses, no.

After having problems with bridging with 4759 I weigh all my target ammo charges to check for (prevent) errors in powder charges. It's still shooter error if we make and shoot our own ammo. I don't mean this to be a snotty response, just my opinion and how I do it.

I count 11 shots on that target.  Are you sure those two outliers are yours?  And I would think that big a difference would have been noticed in recoil and noise.

Sooo, I wonder after reading this all about a Vetterli big bore, I am more interested at the moment as to how you converted from that big 'ol fat rimfire case to to the Boxer system? How did you do the bolt face? Did you make the new case out of .348 Winchester brass? That's what I did. I cheated and had CH4D make me a set of reloading dies. Lee had a set of dies also as they made some up custom for a reloader and had a couple of sets left over. $21 for that set. Works great!

I had this happen in a match with a 3006 Springfield.  I shoot military brass.  Out of twenty shots I had two shots go out of the group. Both high, way high.

No, there are only 10 shots on the target.

The brass is formed from 348 Winch, this particular rifle was converted before I bought it but there are many threads on the Swiss forums on making the conversion. All the bolt face needs is a hole drilled in the center.

The brass is all the same brand and has been used for years, so that is not the problem. In fact it hasn't been a problem before or since so I have quit worrying about it.

I actually loaded up a couple with more and less to try and when I went to the local range to test them. The target stand holes at 100 yds were iced over and so I had to shoot at 50 yds and that proved nothing. I was able to try 20% less and 20% more at 200 yds at our next march and the 20% more was about that much too high but the 20% less wasn't on paper. I only loaded one of each so that was my last try at proving it. I have shot two matches since and have had no problems, the only thing done better was looking closer in each case before seating the bullets to make sure the powder charge looked the same.

Looks like an example of powder bridging in a powder measure. My cure is to weigh each and every charge. As of yet I have not seen a rotary powder measure that is ‘bridge’ proof. I have used an old B&M but found I was more accurate and just as fast when I threw the charge with a rotary and weighed the charge on a scale.

Steel powder was made to address the cold weather issues with Bluedot powder. And less pressure. But it is VERY dirty. I'm going to try to load some rifle rounds this summer with it to see.