From what I've read, a pin with a 5 degree taper ending in a spherical point seems to be the preferred form for good expansion and weight retention.

I have not been able to find a recommendation for depth of the hollow or the diameter of the hollow with respect to bullet diameter.  (Obviously, they are related.)  Is there a rule of thumb?

What about terminal velocity?  It seems that slower bullets need larger (and deeper) hollows and I would guess there's a significant difference between 1600fps and 2000fps.  Or is there?

Over many years i have worked and tested in medium and then on game the use of HP cast bullets in rifle cartridges of 6.5 up through 45 calibers.  Let me say first of all, #2 alloy (as much as I prefer it for HV and match shooting) is not really a good alloy for expansion with weight retention.  It is still too hard and somewhat brittle for that application.

The best alloy I've found for HP cast bullet expansion at impact velocities from 1400 upwards of 2400 fps is with a 97/1.5/1.5 alloy (COWWs with 2% tin then mixed 50/50 with pure lead).  Such an alloyed bullet is AC'd, lubed with a good soft lube and GC'd.   I've found in 7mm through 35 caliber bullets a 1/8" diameter HP 3/16" deep works well as well as any other configuration for expansion and weight retention.

I load such softer bullets with medium (4895 range) burning or slower burning powders (H4831range) to maintain not greater than 4-6" max grouping with 8 rounds +/- at the maximum range to be used [usually 200 yards].  Further, as I've often mentioned, I clean the barrel every 6 - 8 rounds to maintain that accuracy when pushing the softer alloyed bullets to 1900 - 2400 fps muzzle velocity,

I got a 311-291 hollowpointed by Eric last year that has approximately the shape you describe. The depth of mine is about 3/4 of the nose, as I still want reasonable weight if the nose shears. Unfortunately I haven't been able to hunt with any yet.

I forgot to mention that the diameter of the hollowpoint is 0.100 inch in a 30 caliber bullet.

A hollowpoint isn't needed above 1800 fps. A flat nose with meplat 0.6-0.7 of the bullet diameter is helpful. Larry's advice for alloy is spot-on.

Standard Member
Idahocaster posted this 30 May 2022

Larry, thanks for the alloy information! I've been trying to figure out what the ideal alloy for a rifle hollow point would be, and that sounds like a good one.

Ed, I am willing to go slower. In my admittedly limited cast bullet experience lower velocity is generally more accurate, and who wants more recoil if you don't have to have it?

I too have learned over the years through trial and error about the hollow point bullet and the mystique surrounding it with its ability to absolutely devastate the intended target Oh well - we learn.

As mentioned already, my FP cast bullets in the 30-30 or 32 WSP cast in Lyman #2 alloy and run to about 2000 fps perform exceptionally well on deer sized game and pigs IF, and I emphasize IF, the shot placement is good. A hole through the heart or lungs on a game animal is always fatal. The "shock" of the bullet usually drops them in their tracks if the shot was a surprise and the animal was not pumped full of adrenaline.

As for the hollow points, I tried my first trial with the 44 Mag for boar hunting. Now when I say boar, I mean large, big, aggressive Russian boar. Having hunted with J.D. and Handgun Hunters International for many years, I saw boar absorb multiple 44 Mag hits and keep running. I purchased the Lyman 429640H and cast them in Lyman #2 alloy because I knew, against all advise in the literature, that MY bullets would perform perfectly. From this photo, you can see the results of my arrogance! The bullets at 1300fps completely shattered. 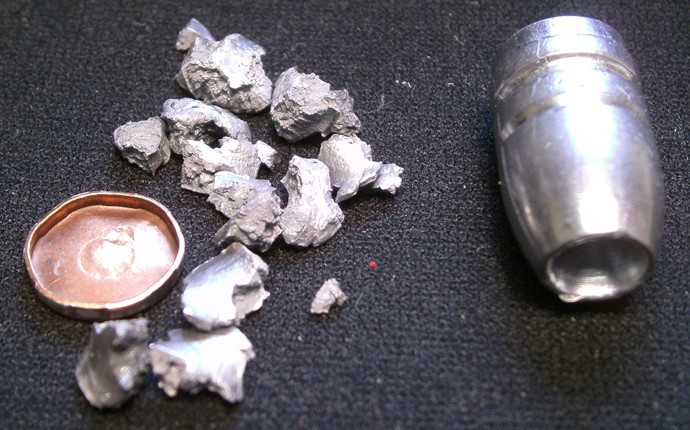 After swallowing my pride or eating crow, if you prefer, I began to cast them in 20:1 alloy and the results were immediate and impressive. Velocity used was about 1200 fps on average. Would this bullet have killed a boar any better than a 30-30 if it had gone through the heart? That's another whole debate but this bullet did, in fact, drop the hog in its tracks. Below is the image of the 20:1 alloy recovered bullet. 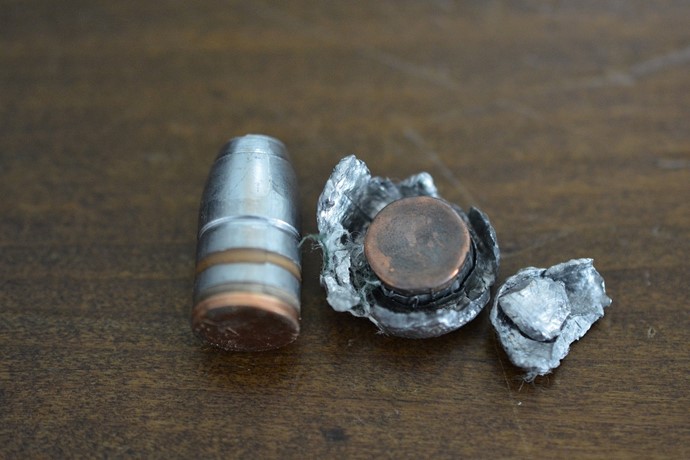 I have also played with 38 caliber bullets for the 38 Special, 357 Mag, 35 Rem, and others. My experience there has been that large flat meplats have more of a killing effect on game than any HP designed bullet. Here you can see a Lyman 358439 bullet cast in Lyman #2 and fired at 1100 fps out of a 38 Special. Velocity had to remain lower to keep the bullet from shattering but the velocity was not enough to initiate mushrooming. Casting in 20:1 or 30:1 alloy and adjusting the velocity would have accomplished this but I have seen the results of a large flat meplat on game. Below is the image of the Lyman 358439 Fired directly into a barrel of water. The tip opened up some just prior to the bullet fragmenting. It ran out of steam before ripping itself apart. 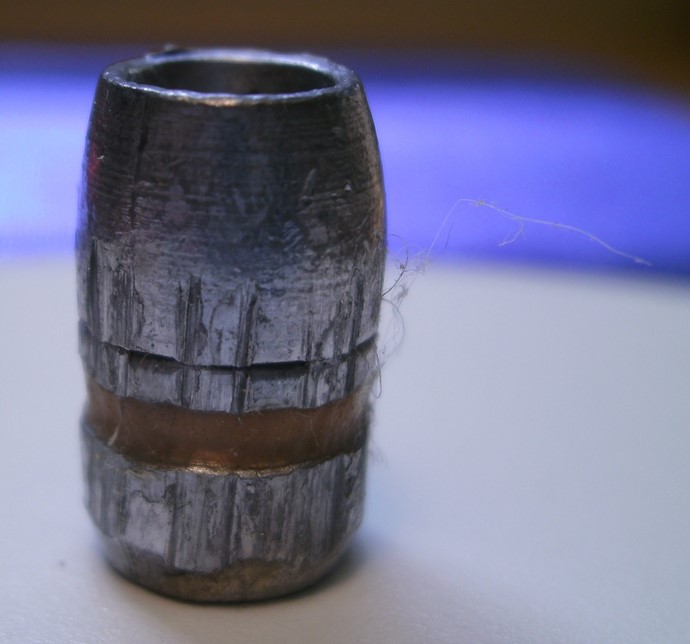 Next year I plan on hunting the boar with my Winchester 1886 in 45-90. I may actually fire the rifle rather than whacking the boar on the head with it - a sure killer. I chose the Lyman 457122 "Gould Express Bullet" that was a favorite in the day. I have cast these in 20:1 alloy and will be using Black Powder to push these along at 1600fps. This alloy and speed, with this bullet, has proven to be a solid performer. Heck - even if it doesn't expand, the meplat alone is large enough to stop a rhino. Initial test have shown positive expansion but I did not take photos yet. That is a project for this summer. 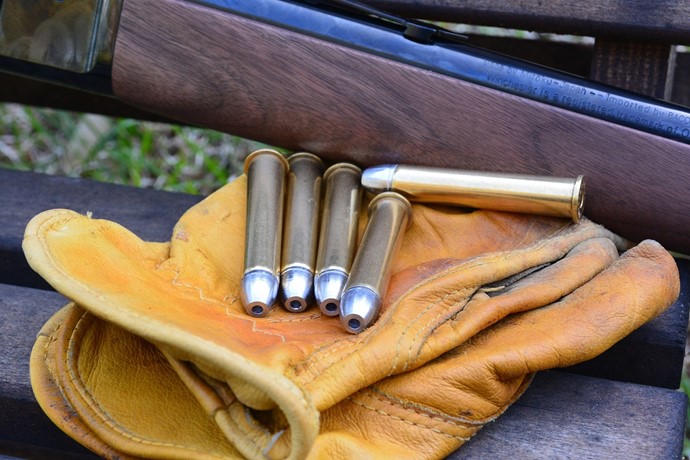 I wish you all the best on your specific quest. While we all reply like we know everything about the matter, I remind myself I learn something new every day. If I have missed a specific detail on your initial post, my apologies for this long-winded reply! Please keep us informed with what you determine and find to work best in your situation with your unique parameters.

Proven is cup point 0.6 of meplat diameter with 60 degree draft angle so that depth of cavity does not exceed major diameter of cavity. Very effective at subsonic velocity up to 1300 fps with soft alloy 8-11BHN. Below 900 fps reduce draft angle to 30 degrees with 8-10 BHN alloy.

David Reiss is attempting to attach a file to this post for you regarding HP Cast Bullets. The articles located on the LASC web site are a wealth of information if you did not know that. Hope the attachment works.

JD - I am new to this site, though I have posted a couple of times to Cast Boolits.

These bullets do nicely on pigs when driven hard. The noses do blow off into shrapnel and I do not consider this a disadvantage, but the bases penetrate seemingly forever. Almost all other commentators, whose opinions I greatly respect, prefer a softer bullet that stays together, but this may be velocity dependent. For full throttle loads I have found I need the hardness both to keep the group together and to ensure penetration, at least of the base of the bullet.

A few days ago I shot a big sow and two weaners with a .30-30. The sow was hit well forward (shoulder), the base of the bullet went right through, and she dropped like a stone. The weaners looked like they had been reamed through with a 2" auger. Muzzle velocity was 2,300 fps (LeverEvolution powder), and the shots were close.

In my .44-40 days I had success with dead soft hollow point bullets and black powder velocities. The variables for a particular bullet are alloy, velocity and hollow (or lack of it), and they must be in balance.