CBA Member
TheMrNotSoFamous posted this 30 May 2018

What kind of front rest is everyone using? When I attend local benchrest matches, most everyone is using a Caldwell The Rock BR with a few using much more expensive Sinclair models. One very serious gent paid a machine shop $1000.00+ 10yrs. ago to make one to his specs and I gotta say it is a quality rest all the way. All I've ever used is bags and I do alright. I can say I'm competitive but as always looking to do better. Is The Rock any good or are people just using them because of their lower price? What are some pros and cons to look for in a front rest? Thanks in advance for your opinions. John

Owning a firearm doesn't make you armed anymore than owning a guitar makes you a musician...words of Jeff Cooper

IMHO: It has to be solid, every moveable part should have a lock. It should not move before, during or after of the shot. It should have a large footprint. Weight makes them more stable, heavy is good and heavier is better. The top must fit the forend, shooting a sporter or military rifle with a 3 inch benchrest bag is a waste. Windage adjustable top is not required in CBA style shooting.

One thing I find helpful in a front rest is the windage adjustment. This allows you to fine tune your hold without pushing the rifle somewhere it doesn't want to go. Unfortunately this does push you toward the more expensive rests. Many good shooters shoot really well w/o this feature, however. I seem to recall a couple of scissor jack front rests at the nationals.

I think having the front bag fit your forearm is the most important feature. I like a windage adjustable front rest and a speed screw on the back leg to make things a bit easier and avoiding having to wiggle the bags about, but they aren't essential.

Dan Hudson shoots with a scissor jack with some kind of bag on top and has won the CBA Nationals a couple of times and won his class several times.

I have been using a Caldwell Rock BR for several years now. At the time I was looking for a decent front rest and found this near new Rock rest at a local gun show at a reasonable  price, so ended up with it. For my purposes, it works ok after I made some modifications.

Don't know what they are made of now but the base on mine is cast iron which adds to the weight of course. But it will still move  on a bench. A sand bag or two on the legs helps.

Both the elevation and windage  adjustment have a habit of loosening when in use and must be continually checked throughout a match session to prevent groups from going south all of a sudden.

These are the two major downsides that I have found. But all in all, the rest works for what I do once getting acquainted with it. Guess it's like anything else, depends on how deep your pockets are.

Ditto on the Caldwell, except I installed very stiff springs on either side to have opposing forces.

I have had many variations; leather sandbags filled with heavy black sand, Freeland rest, B-Square, Hart rest with windage top, scissor jack adaptation and now the Sinclair rest. All have done the job and worked well, my thought is the user has to adopt to the rest and learn the idiosyncrasies.

Currently using the Sinclair rest with windage adjustable tops. I have two tops with one base to use for both Military Rifle and Benchrest competition. The top is easy to change and this works well plus saves weight on trips. I did carry two rests, but that took up extra space.

Also, I am thinking of adding stiffer springs to my windage tops to assure they stay in place. during recoil. My scissor jack rest is adapted to prairie dog shooting with springs added to hold the position down.

Can you post a picture of your scissor jack setup? I am always trying to improve on my  prairie dog set up.

This is way out of my league, but the Farley Coaxial rest is about the best you can get. You control windage and elevation with one extended knob. Heavy also. 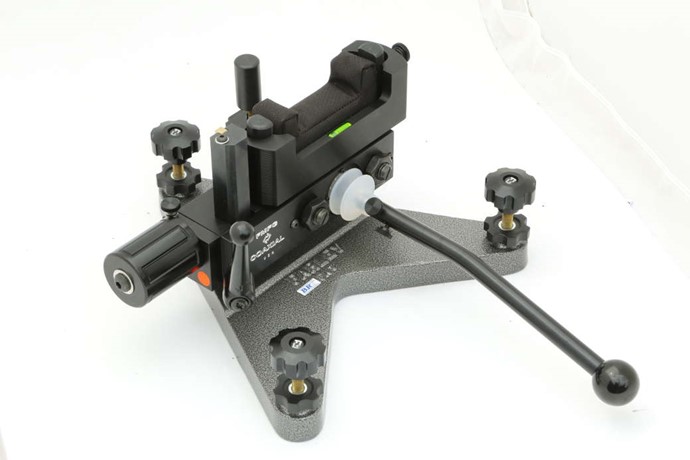 CBA Member
TheMrNotSoFamous posted this 31 May 2018

Thanks to all for your input. That Farley rest is similar to that custom $1000.00+ rest I spoke of earlier. The custom rest looked quite a bit different but was also controlled by a long extended knob and was made entirely of stainless. When I see that custom rest again I'm gonna take a much better look at it and ask the gent what features he was wanting out of it. He did say it is the best rest he's ever used.

Owning a firearm doesn't make you armed anymore than owning a guitar makes you a musician...words of Jeff Cooper

I stopped carrying my heavy Hart/Sinclair rest to the range years ago. I now use the bipod only.

I think  the Cast Bullet Assoc.  should give you the option of using bipod in competition.

Standard Member
lotech posted this 31 May 2018

I've used a Hart pedestal rest with a Protektor leather bag for at least thirty years and have not found this setup lacking in any way. With the bag, total weight may slightly exceed twenty pounds, but it doesn't move around on the bench. I would assume this rest is still marketed.

I stopped carrying my heavy Hart/Sinclair rest to the range years ago. I now use the bipod only.

I think  the Cast Bullet Assoc.  should give you the option of using bipod in competition.

That seems like a reasonable suggestion and will suggest it to the CBA board for their discussion.

Just a reminder that the bipod will add weight to the rifle. I use the simple Harris with adjustable cant, but there are some more extreme options out there...such as wider and lower foot print. Sinclair catalog shows most of them.

I use the Rock BR.  I like the windage adjustment because I like to set the rest up, shoulder the rifle with my eyes closed, then adjust the rest so it will consistently be on target when I open my eyes.  I then use the windage/elevation adjustments to move from the sighter target to the record target or from one bull to another on the postal targets, trying to keep the mating of the rifle butt to my shoulder always the same.

Pictures of the scissors jack front rest. Ed Doonan built the rest. I added the J-hooks and the spring to hold tension against the screw. Setting the spring in the various J-hooks allow for raising the height. 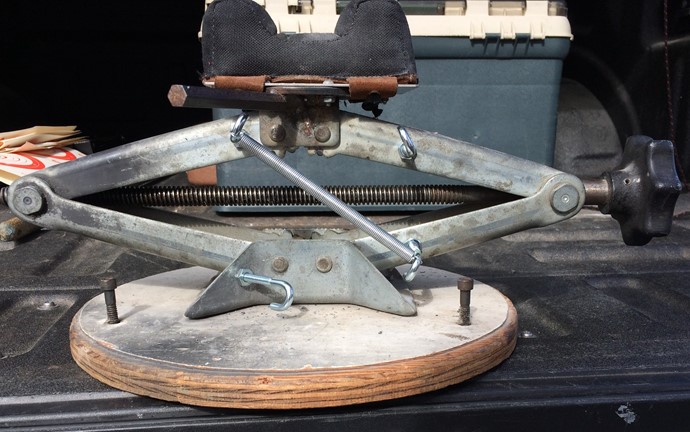 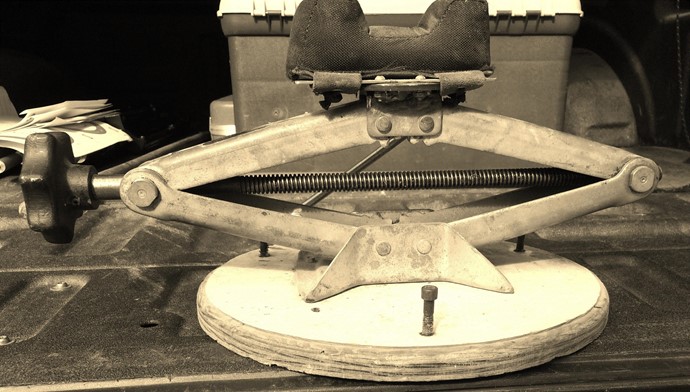 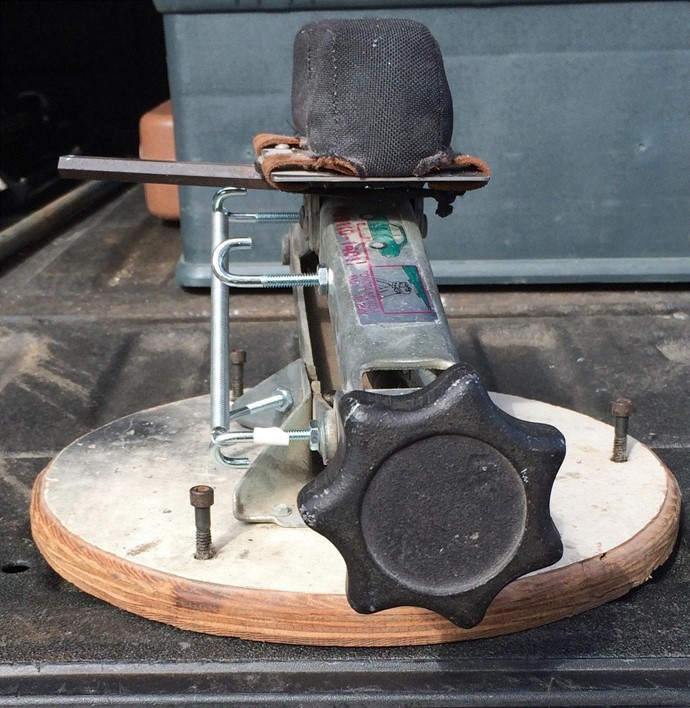 I'll have to take pix of mine!  The spring sounds like a good idea!

Thanks for sharing the pictures. 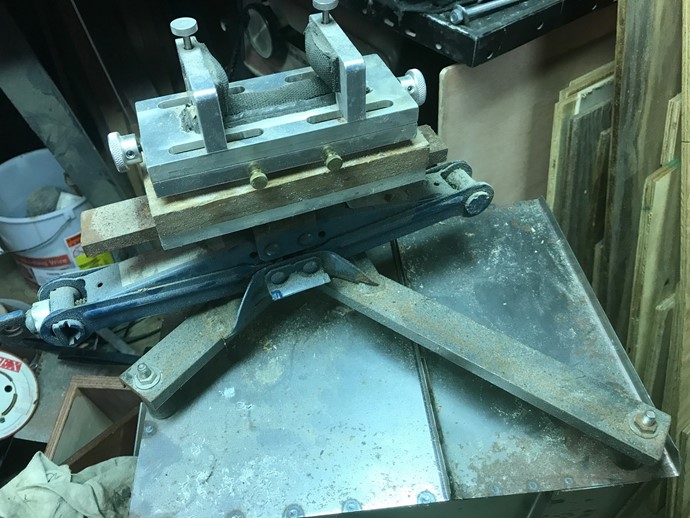