Do you shoot copper out of your CB rifles?

I was packing to take my Tikka 223 to the range for some CB development and I tossed a 20 pack of cheap, Russian FMJ rounds in my shooting bag to maybe do some plinking.  Then I got to wondering if the copper would affect CB performance.  My old reloading book, written by John Wooters says not to mix them.

I could see not shooting copper in a benchrest gun, but do you avoid mixing the two in your other rifles?

You can prove this by shooting cast from a copper-fouled bore, then clean it, and see the groups improve.  Most/many used centerfire rifles will come to you already copper-fouled and ready to do this experiment.

I don't have reams of well-organized data, like an old guy like me really ought to have, but I have seen this several times myself and am convinced that Wooters is correct.

So....I get to the range and get out my bullets and find that I grabbed a box of 44 magnum reloads instead of the 223 45 grain pressure series I had loaded up! Good thing I brought a box of Wolf ammo or else I would have had nothing to shoot. Bad thing is, now I have to clean the copper out of the barrel. By the way, that Wolf metal case ammo is some crappy stuff.

Not an absolute rule; depends on the rifle.

This is the sort of question that should have been settled 35 years ago by the time the CBA was 5 years old but like Scearcy I have never seen the results of a well controlled test that gave hard evidence one way or another.  Why don't we make it a forum project to gather data and see - does it hurt accuracy of the CBs, if so how much, how much copper fouling does it take to do how much damage to accuracy (there may be a difference for a heavily fouled old military rifle and a CB rifle that has had 20 JB shots through it) bore roughness may, or may not affect the outcome.

We may not be able to pin it down to a simple definitive answer but we should be able to learn something about the issue.  It's another excuse to shoot and help keep us out of the bars in the afternoons. This may or may not be as interesting as lobbing CBs and a paper coyote but it won't take a 200 yard range.

Mitch has already done some experimenting and if he can find some of his old notes that would be a start.

Lotech make a good point it may depend on the rifle as well as other factors but pinning it down a bit would be a contribution to what we know about cast bullet shooting beyond old hand-me-down pronouncements.

Wooters was a smart guy so I am betting that he was right if somebody offers the right odds, but let's either support his opinion or cast a bit of doubt on it.

If we get enough data to propose conclusions it would make a good TFS article giving the results a bit of durability instead of vanishing into cyberspace when this thread ends.

How about it? Any skeptical or curious shooters without a winter project?

To kick things off, I will produce the results of a short test -- clean bore -- twenty shots with CBs -- no cleaning -- 20 shots with factory level JB loads -- no cleaning -- 20 shots with CBs (from the same lot as the first 20 CBs.) These will be fired through a modern cold hammer forged barrel that is quite smooth, but not lapped.  I won't promise exactly when because it it too darned cold for me to shoot some days here in the high desert.

I think it would require the use of several extremely accurate cast bullet rifles to come up with anything worthwhile on the subject. There may be something to this, but at the moment, it appears that much, if not all discussion, is based on "conventional wisdom".

I've never seen any merit to the claim of cast bullet accuracy loss in a copper-fouled bore. I'm speaking here of normal, moderate fouling, not a neglected, heavily fouled bore that would degrade the accuracy of any bullet, cast or jacketed.

Conversely, in defense of what may be a questionable conventional wisdom claim, I may not have any rifles accurate enough to do a definitive evaluation and my scopes may lack the high magnification which might be necessary to prove anything.

In my "modern" caliber rifles, I always use jacketed to establish an accuracy "benchmark"  But clean all copper out before shooting cast.  However, in my IHMSA days, I was shooting both .357 & .41 Mag. revolvers using cast for chickens & pigs and switching to jacket for turkey and rams.  I usually would run a bronze brush thru a few times before shooting jacketed..but a couple of times I forgot & didn't notice any difference in accuracy.  Maybe with rifles higher pressures it would make a difference?

You are right our knowledge on the subject is probably based on conventional wisdom which may or may not be true.  All the more reason to see if we can't drag it out of that category and  some decent experimental backing -- one way ot the other.

I don't believe there is any valid reason to believe that to do a worthwhile study you have to have nearly perfect (extremely accurate rifles) to find valid results. Few research labs in any field have the very finest and most precise equipment. They have budget restraints just like everybody else.  Still such labs produce a lot of valid research.  If it isn't true in other fields why does the idea keep popping up that to find out anything useful about cast bullet behavior it takes extremely precise equipment.

It is probably true that if you get statistically significant  results with a 1 MOA rifle that copper fouling doesn't affect accuracy it might not be assurance that such fouling might not affect accuracy at the .5moa level but people with rifles less accurate than 1moa (95% + of CB rifles) could quit worrying, thus useful information for most shooters.

On the other hand if you got statistically significant results that copper fouling affected accuracy at the 1moa level it surely would be valid for more accurate rifles.  Of course you might then wonder if it affects rifles that will only average 2moa.  You could even argue that you would need results with a less accurate rifle to find the answer.

There is nothing wrong with either outcome.  All research results have limitations on where they can be applied.

I will happily accept your results.  Let the statistical nit pickers fight over what is valid and what is not.  Personally I don't care.  How many times do you have to burn yourself to learn that the stove gets hot?

Aren't them gas checks made out of some copper alloy?  Or does the fact that the lead is in front of the gas check negate the copper in the gas check?    I will have to shoot some jacketed stuff out of my 223 and then my lead/gas checked load to see if my accuracy goes to pot.

Curious shooters will look forward to your results.

Gas checks are a copper alloy, but they are comparatively short and usually sliding on a very thin layer of lube from the bullet. I would imagine the friction is comparatively very low which should reduce the tendency for it to rub off and/or adhere to the bore.

Does anyone use the old Blue Goop concoction?   I've got 12 oz of ammonia, 1-1/2 Tbs of peroxide, and 5 inches of 14ga wire brewing in a lightly capped glass bottle.  Not sure of the concentrations of my ammonia and peroxide.

Unless someone stops me I'm going to clean my Tikka 223 with it.  I won't leave it in long.  Then it will get a good flush with WD-40 and/or soapy water.

All the recommended de-copperers run about $30 with shipping.  This is a do-it-yourself sport.  I have the ingredients for BG in my bathroom.

I plan to use this gun as a dedicated cast boolit rifle.

Am I running afoul?

See if this works. 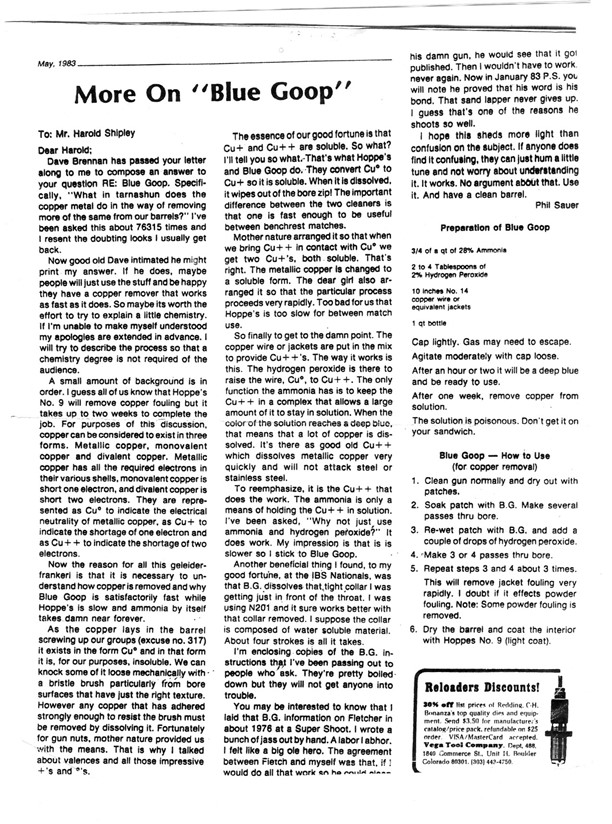 max053, thank you for posting the article.  I plan on trying it in a week or so after returning from the big city.  I will post results of cleaning if I remember it.

Why are we taking about cleaning copper out of gun barrels? Hoppes #9 cleans copper out of gun barrels, and has done so very well since 1842, when it was invented by Jeremiah Hoppe. Put #9 on a patch, push it thru, back and forth about 5 times, throw the patch away. Another #9 patch, another 5 X push, throw it away. Keep on until patch is clean, about 3-5 patches. Leave barrel with #9 in. Come back in 2-24 hrs, do it again. Keep doing it until there's no blue/green on the patch. Done.

This is NOT a secret, hasn't been since 1842. Why are we/you talking about it now?

I want to kill, not wound, that paper coyote.