Handloading for the 38 WCF cartridge has been a lot of fun both with smokeless propellant as well as with Holy Black in both real Black Powder and Pyrodex. Nothing seemed amiss until I added another 38 WCF firearm to the stable. Initially I was shooting the cartridges in an Uberti 1866 rifle and cartridges made with virgin brass from Starline and those made with my Lee 3-die reloading set cycled, chambered and fired just fine in the rifle.

When I tried to chamber the reloaded cartridges into an Uberti 1873 revolver, things went array. The cartridges simply would not chamber fully into the revolver and were sticking out at the rear for .040” (about half of the rim thickness) preventing cylinder rotation. At first I though the .401 bullet was giving me fits but I soon determined this was not the issue. Either the cartridge base was too wide or the shoulder was the problem.

Observation of virgin brass compared to my “Full Length Resized” brass confirmed the Lee resize die was acting as a “Neck Size” die with little to no resizing of the shoulder or base of the case. Measurements indicated the fire-formed forward moved shoulder (as observed) was appropriate. Reading and studying the subject revealed that virgin brass had a shoulder set way aft to allow the assembled cartridges (with virgin brass) to chamber in a plethora of original and reproduction firearms. In fact, the shoulder on virgin brass is almost indistinguishable on the case.

I decided to try dropping the die downward, thereby setting the shoulder farther aft on resized cases. Since the die was mating with the shell holder, the bottom of the die would need to be trimmed. Not having a lathe to knock .040” off the die, I fired up the bench grinder to grind off some metal. I realized at this point in life that rather than taking chemistry and physics in school, I would have been a lot happier taking shop class. Perhaps I would have had a lathe by now. Regardless, the grinder worked and provided me with a working trimmed resizing die.

I fired some cartridges in the rifle and resized/reloaded them with my modified size die. The cartridges dropped right into the revolver chamber like virgin brass. Inspection of the resized brass with the modified resize die revealed that the shoulder is set back farther aft on the case allowing chambering in both of my firearms.

I will never determine which object is out of spec, the revolver chamber or the size die. It could actually be that both the chamber and the size die were at the far end of the tolerance table. I don’t really care to spend any time figuring this out since the problem has been resolved with a die modification.

The funny thing is that after seeing the rough finish on the mouth of my modified die, it kept working on me to clean that up. Without a lathe, this task was near impossible. I contacted a Tool & Die shop near me and those rascals cleaned up the mouth of the die on their lathe for a very modest fee. You would never know that die has been bench ground! I was also provided a tour of the shop and I have to admit, it was very impressive. I didn’t even recognize most of the machinery in there and just nodded my head when the shop owner described what they are. A wire lathe? You got me. It sure looked EXPENSIVE though. It cuts metal with a wire strand, I think.

Anyway, here are some pictures of the cases for you to view. Those of you who shoot the 38 WCF will be familiar with the images. 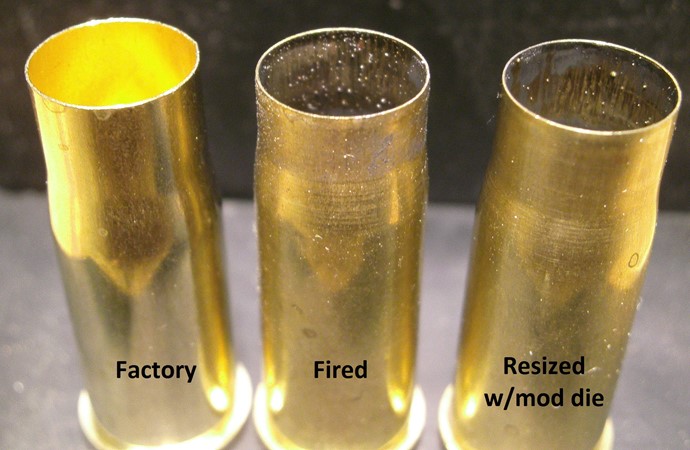 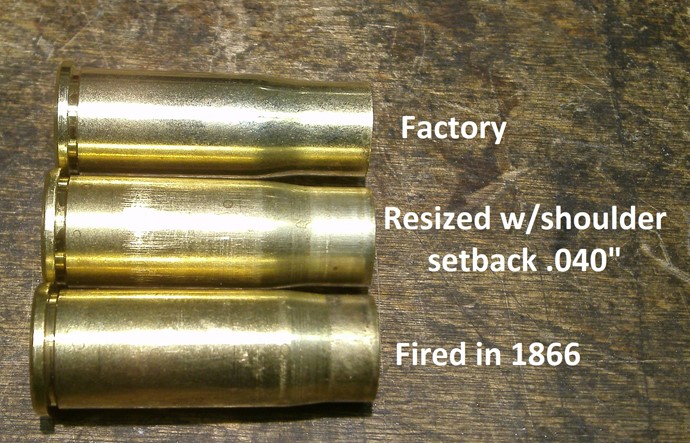 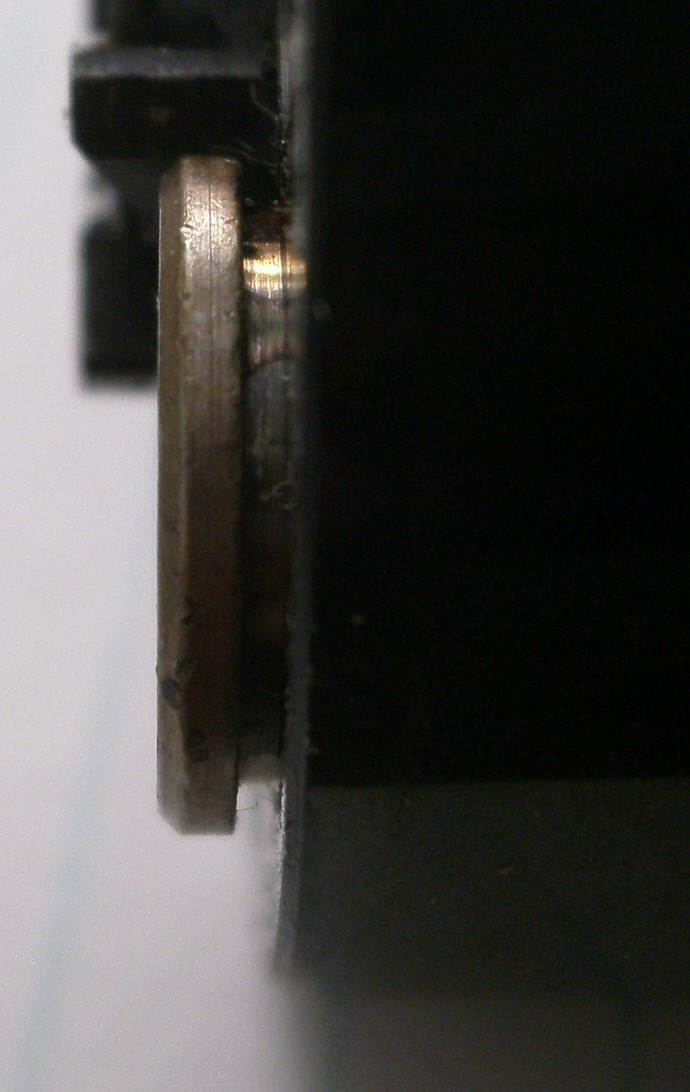 It appears you effected a good solution. Good job! Is accuracy up to snuff with ammo built to accommodate both guns? Bullet diameters/throat fits interchangeable? Very fortunate if they are!

I would've done a chamber cast of both guns and measured throat diameters of the revolver too to see just what's what before embarking on any fixes.

I wish I had put together a basic metalworking shop (lathe, mill, etc.) a lot earlier in life than when I did. I could've enjoyed a more rewarding "gunnery hobby" had I done so long before I did. On the negative side, it would've been a nightmare to deal with during my many location changes!

After tapping the cartridge into the revolver chamber it was evident the shoulder was impeding the seating. The bright ring at the shoulder datum showed that. The absolute simplest solution (and cheapest) was to drop the die 40 thou to set the shoulder farther down on the sized cases thereby making it closer to virgin brass shoulder position. And....I detest making chamber casts in lever action rifles. Without a sluice system, getting the metal in the chamber is a real headache. I have done it but boy I have to be desperate to do it.

With "Minute of White-Tail" accuracy my goal, both of the guns meet that critical test. The 1866 is a tack driver with virgin or resized brass. The revolver shoots 2" groups at 25 yards with ease. For making smoke at the range and annoying all the "tacti-cool" dudes with their plastic guns, they run just fine!

I know a few folks who had to move shop equipment. Boy they hated that. You should have seen the Tool & Die shop. Their power bill must be staggering.

i remember shooting some kind of old gun in 38-40 long ago ... not too inspiring at the time ... i remember thinking it was an odd duck ... but then i was comparing it to shooting 44-40 in original m73 and a real old cowboy peacemaker ...

reading the above, i looked up what the opinion guys on Wikipedia thought ... one mentioned that there is a discrancy among chamber specs and various cartridge makers ...no more detail, but interesting ...

and ...   never the less ... it remains for crafty reloaders to arrive at a good solution and get some shootin done ...

I have a Highwall in 38-40. Comparing factory to fired the shoulder moves forward ~.100 and the Lee die does not push it back at all. Doesn't seem to reduce body size much either. I'm using a modified Lee Hornet collet die to neck size only. Biggest problem is difficult to seat the bullet in straight.

CBA Board
Lee Guthrie posted this 2 weeks ago

Your article might become a lifesaver for me -- when I get a chance to shoot my .38-40s.  Have both 1892 Winchester and Colt New Service, and I'm pretty sure that my die set is LEE.

The takeaway is that the Lee die, at least my Lee die, seems to be a neck size die rather than a FL size die. That is not an issue if you are loading for 1 specific firearm since the now fire-formed brass only needs to be neck sized.

The problem manifests when reloading for more than one gun (different chambers) with minor chamber variation. I did not include a photo of the resized case before I modified the die because it looked exactly like the shown fired case with sizing marks on the case neck. Clearly the FL size die was only neck sizing.

What surprised me was the chamber variation between two Uberti guns. Granted one is a rifle and the other a revolver, but jeez, forty thousands!

I wonder if the RCBS Cowboy expander plug would make cast bullet seating easier for you. A larger expander plug can be had from a few aftermarket makers as well. I had to order one for my 38-55. Had I bought the Cowboy dies set initially, I would have saved about $100. I was buying all my 38-55 cooters when the supply was all dried up a year ago. It took me two years to cobble together casting and loading tools for that caliber.

about 60 years ago the Rifleman had a hint about making a seater die by casting lead around a case ... might be worth trying ...  can always remelt failed attempts ...   then you could tell your buddies that you shot up your reloading dies ..

thinking about how to make a shoulder bump die in a lathe ... i sold my cnc rig .. woulda been easy ...on a manual lathe i think it could be close enough to free-hand a shoulder bumper ... erring on the small side and let the case just expand out on firing.

if there is a shortage of correct 38-40 full length dies maybe there hasn't been a tight standard for this cartridge ...

I made an expander, the problem is that starting by hand I have to eyeball it and tweek. The brass is really thin and very easy to seat crooked.

Just surmising here but .040 is a bunch to set back the shoulder on every case you fire from the rifle. I would suspect that brass life will suffer. Fireforming with every trigger squeeze in your rifle. Virgin brass or once fired brass shouldn't be a problem but after that you may want to consider keeping them separate and getting that machine shop to make you a washer to put under you lock ring to span the difference. Like a .44 special/ .44 mag die set has.

might check that shoulder length difference is not due to headspace ...

Ken, That is a very good point. There are no observable “indicators” of excessive HS but without a HS gauge I am speculating. No bright rings. No primer set out. Easy chambering of fired brass in same rifle. I think it’s fine.

I like that suggestion. It's not like 38-40 brass grows on trees. Easy to source now but from only one vendor. Unlike my other calibers, this brass has not been cycled through enough times to demonstrate a life cycle. Anything to extend that life span is useful.