Now ive' seen line in the neck of my brass 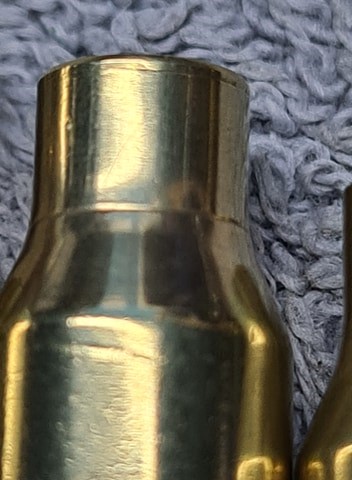 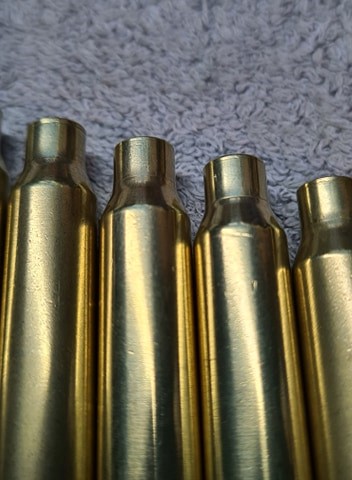 Could that be from the landing or is my brass for the trash?

I think that if you do some detective work you may be able to identify where the marks are coming from.

The two most likely areas are from the chamber of the gun when they are fired or from an operation on them before loading.

The easiest way to find out which one is to take some brass that does not have this line on the neck shoulder junction and fire it with the same loads that you usually use. If it appears after firing, then it is something to do with the chamber in the gun. If it is already on the brass before you fire it, I would look for evidence of someone neck turning the brass to thin the necks and uniform them. If the neck turner cutter is allowed to go too far down the neck and start cutting into the shoulder of the case, it will leave a step as you are seeing.

I've shot a lot of precision neck turned brass in competition that showed that same feature without any problems. So I wouldn't worry about it too much as long as the neck does not separate from the case body when fired.

Another way that this may be happening is from a sizing die that is defective. Check to see if a case that has a normal looking neck has this step after sizing.

If you are not neck turning or reaming I would check to see if it is the gun's chamber or a sizing die causing this problem.

By the way, that's a nice photo you made!!

I am shooting a HOWA 1500 varmint bolt action but at the same time my son inlaw shooting AR 15 and we collect our brass.

I have learned the hard wad not to collect brass that we dind't shoot, one exploded in the chamber it wasn't catrastrophic but was still a bit shocked, and since then I only keep our brass and don't pick anything from the others

It is possible that it comes from his AR because thats semi automatic,

I opend a case and found this not good 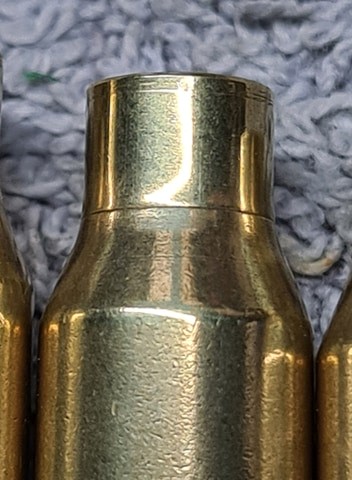 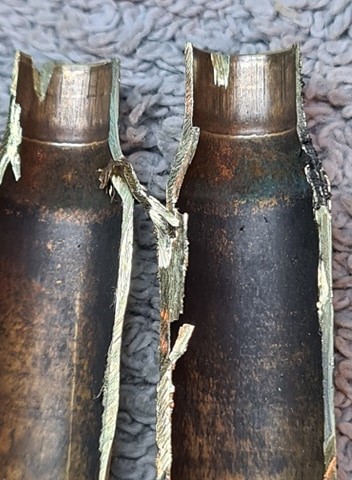 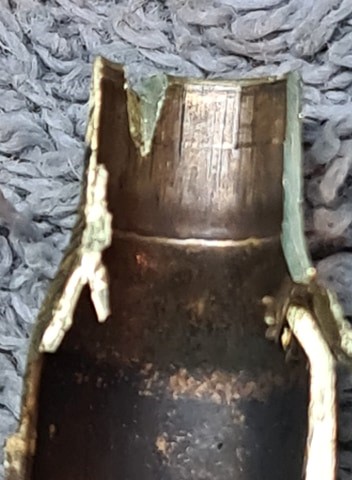 those are very educational photos, thanks for the post.

Time to be retired.

The mark near the shoulder looks to me like an ejection mark from an AR. I am more concerned about your statement about a cartridge exploding in the chamber. Was that in your HOWA? Were you just closing the bolt when it happened? That is a very serious event. Also, the brass you sectioned, did it come from your rifle? I think a bit more detail may be needed.

I wouldn't be too concerned with the angular ding in the case below the shoulder. It looks like it's been shot in an AR and banged off of the deflector on the side of the action during ejection.

It's not uncommon to find brass that is damaged in an AR.   The ring on the neck/shoulder junction is serious. With the advent of very short barrels on AR's,, the gas port it not very far in front of the chamber. This results in the gun going out of time when the bolt starts to move backwards to eject the shell. With the gas port too near the chamber, it lets the gas come back to the bolt to early and it will try to eject the shell while there is still pressure in the chamber. This puts a lot of strain on the neck as the shell is being pulled back while the neck is still tightly held against the chamber neck area. This problem can also be caused by running a too light buffer in the gun too.

That ring is also on the inside of the case neck and it might be a stretch mark on the brass. I can see the thickness of the neck from the photo and it does not look like the neck is thinned in that area as would be found from a stretch mark. That is puzzling to see.

It might be that the AR rifle that the case was fired in has a timing problem and is damaging brass. "Might" being the operative word here.

Peter, you need to find some undamaged brass and shoot it only in your Howa and see if it is making the mark on the brass or not. If it does, there's a problem with the chamber in the gun. If not it's a problem with trying to use brass that has been damaged before use in your Howa.  You may have to keep the brass segregated between the two guns from now on.  Picking up range brass is not a good thing unless you know what happened to it before you picked it up.

Until you determine which gun is making the ring on the cases, it is very hard to figure out what is going on here.