Lately I have been shooting the old style Lyman 225415 powder coated in my Hornet.  Frustrating results with the odd good group then the little rifle will toss a bullet or two wide.

Yesterday I was prepping some more ACWW bullets to powder coat and decided to weight them all as I had been visually inspecting only.  To my horror I detected an extreme variation of 1.2gr.  Appox 50% were in the range of 48.6-48.8gr (using that batch) but the odd one went a full 49gr and the balance were low 48's with some even dipping to 47.8.

Now 1.2gr may not sound much but is is near equivalent of a 5gr variation in 200gr bullets.

Will be shooting the weighed bullets later today.  Results to follow.

Clean? What is the clean you speak of?

Not discounting the gas check possibility as this exact mould has thrown them in the past and took out the screen on my Chrony but I apply the GC prior to powder coating (they would not go on the shank after coating) so they are basically glued in place now. 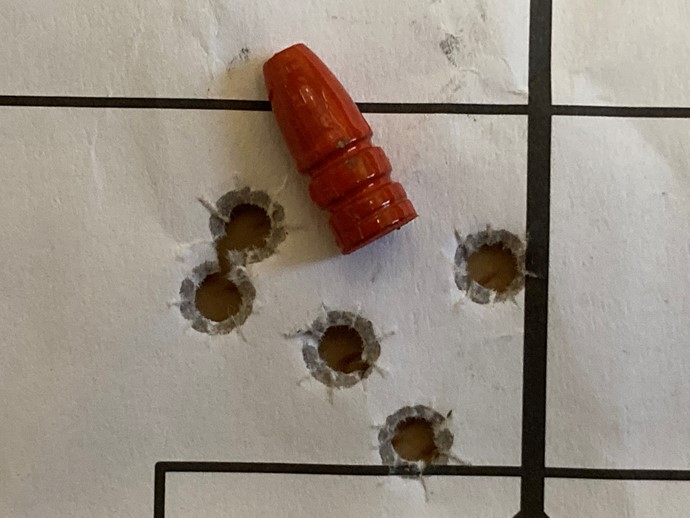 What do you mean you will be shooting "the weighed bullets?"  I hope you mean that you will be shooting the uniform weight bullets and comparing them with the light and heavy bullets.  But whatever you are doing I will be looking forward to your results.  We need more experimentation if we ever hope to learn what makes a difference and what doesn't.

"Assume Nothing" is a good principle.  I recently weighed a box of Berger 65 grain jacketed bullets and found they varied in weight by 0.9 grain.  Not quite as bad as your cast bullets, but that weight variation doesn't keep the Bergers from shooting well under 0.5 moa.

Jeff I was shooting subsonic in a K Hornet and looking for sub MOA with a Lyman 225438 two cavity mold a while back.   I was weigh sorting to +/- .0. and bullets were dropping from the two cavity mold between 42.7 to 43.7 (+/- .5).  And there were a lot of discards lighter and heavier than that.  I just trimmed it down to the 42.7 and 43,7 range to make it look reasonable. The dispersion was so large that I had to settle for =/- .1 grain.  My groups were not what I was looking for so I finally took a hard look at the mold.

I started by separating the front mold from the rear mold and compared those weights.  What I found was that when I separated the front casting from the rear casting the weights were forming two separate sine waves.  Without sorting by cavity I could easily have been shooting the lightest from one cavity with the heaviest of the other cavity since the two sine waves converged.  I'm not saying that's your problem but since you are dropping with a 1.2 grain variation I would maybe check it out.

Heck of a bugger trying to separate the front cavity for the rear cavity while your in the process. Someone later clued me in on pricking a dimple on the driving band of one so I could sort after casting.  But if you're careful you can keep track of which side of a pencil the cavity the bullet falls from.

The second thing I would look at would be gas checks flying off.  That's a taboo topic on most forums with radically different opinions as to whether or not a check spinning off the shank 10 feet or 100 feet from the muzzle of your rifle will effect the bullets path.  So I would look hard at that and not disclose to anyone that you have done so.  Just try to make sure they're square and tight to the perfectly cast base.

And remember to keep an eye out for the 101 other things that can ruin a group.  Good luck and let me know how things worked out. 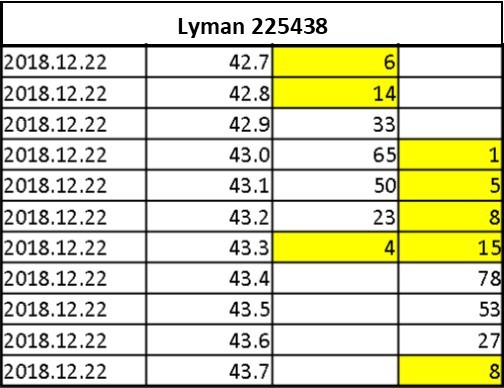 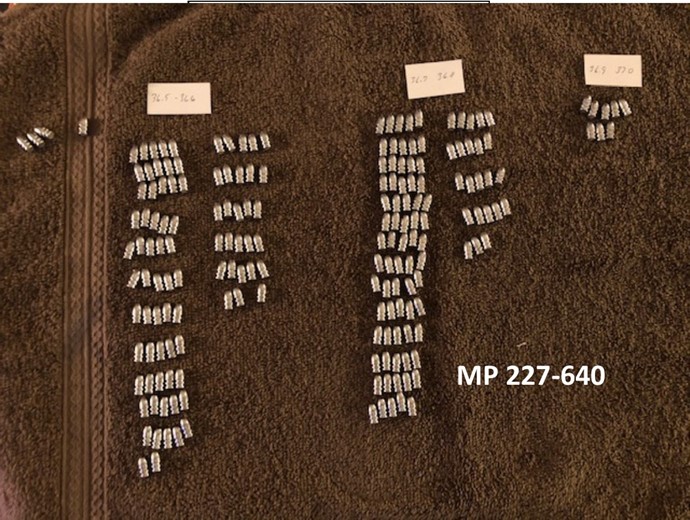 "The second thing I would look at would be gas checks flying off.  That's a taboo topic on most forums with radically different opinions as to whether or not a check spinning off the shank 10 feet or 100 feet from the muzzle of your rifle will effect the bullets path.  So I would look hard at that and not disclose to anyone that you have done so."

I enjoyed your informative post.  I have found similar weight distributions from multi cavity molds.

I 'm sure that Jeff doesn't need my urging, but I would strongly hope that he doesn't take your advice about not disclosing the results of his shooting to anybody.

A forum is worthless if people don't share the results of their experiments.  We also welcome all opinions (except on politics or religion) although opinions backed up by evidence are the only kind worth much. You can expect disagreement by others here, also the purpose of a forum, but you won't be called names or have your character questioned. If you have test results that tend to bring into question the conventional wisdom for cast bullets they are more than welcome here.

Nice group Jeff.  I hope you will continue to shoot these and report.

That is a nice group. I am just wondering about the print that the two on the right made. It looks to me as if they had a slight bit of tip when they hit. The lead ring is not quite concentric. What do you think? Thanks Squid Boy

Squid: the backing foam facings are shot up pretty bad. I see indications of ‘tipping’ when the backings are not fresh.

Verygood group, i bet the powder coating really helps cut down on lead fouling (first 6 inches inside barrel). What hardness are you casting these?

A real good 223 bullet is the LBT. These are sized to slip fit inside the throat. 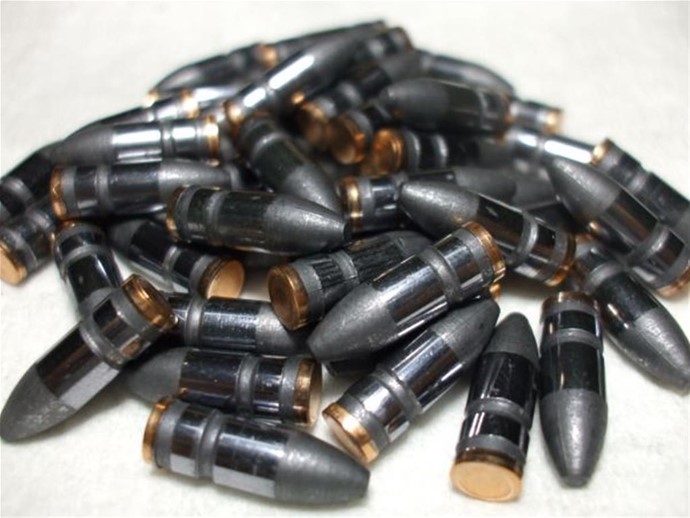 BTW my favorite powder is Titegroup. It meters super accurate using smaller pistol size drum, and velocity spread is very low. I use 5 to 7 grains in the 223 Remington. I do not have any other experience with this powder in other 223 cartridges and cast bullets.

I do know the old Winchester 680 powder (old accurate 1680, not the newer version) worked best in the Hornet with jacketed bullets, but this powder is no longer made.

Wrote on here when first getting a two holer.... the sprue plate wasn't hitting on all cylinders. Holes weren't centered,were too big,plate itself a little thin considering the heat sinking of it being a 22 mould,yadayada.

So,I made a 1/2 dz sprue plate "blanks" a touch thicker than factory. Will spare all the surface grinder,fine tuning bits.

The new sprue plate fixed several issues but,didn't fix a slight out of roundness or,that it wasn't behaving in either a 12T 223 or a 14T 22-250. Both of these rigs MUCH preferred other moulds. I didn't donk around with the 415 much after initial loads?

Towards OU812 and powder fouling. Just a cpl notes. On used 22 center fire barrels, like... well used. When first getting them going with some jacked up cast,I have noticed a hard spot about 6-8" up the barrel. These barrels are sorta a dbl edged issue. In one respect,a "worn" 22-250 barrel makes getting HV cast loads easier because of this,"looseness". Especially with large doses of slow burning powder. You get to start out with a larger bullet,and it's a more gradual choking down. But,if you aren't paying attention to that hard spot,the wheels can come off.

I'm not one to "test" by scientific charts and wasting components if,it is patently obvious XYZ ain't hitting on __,and changing the load or bullet to XY?,the bullets are tearing a bughole. That is what happened to this particular "415".

It was up against two tackdriver rigs. Not much to test? Let's see,one ragged hole vs 2" @100. But,whatever floats your boat? The next guy comes along and his rig LOVES the 415.

Jeff, thanks for the reply on tipping. I try to bring a backer with me to the range just for that reason. Nice work. Squid Boy