Am fishing for suggestions and experience with this chambering.

Goal: CBA bench rest matches so probably "heavy for caliber" bullets. This will be on an XP-100 with a 15" barrel.

Is this going to be a LRH or UNP?

If LRH, someone is finally gotten to the right caliber.  Why try to control all that recoil?

I have no experience with the 22 BR but Joe B. had good luck with the 22-250 which if even more overbore so it should work. I have won matches both with NOE 22572 RN and 22779 SP or very similar bullets, but never at 200 with the RN bullet. A good wind doper coulld probably do it, but not me.  All other 22 molds on the market have BCs lower than whale dung and would be a real challenge if there is any wind.

Now that NIE and LBT are apparently out of business and none of the custom mold maker can and will make such bullets NOE is the only source that I know of.  If there is one out there, I have a job or two for them. Please speak up.

I have had good luck with alloys from 1:25 to linotype but have decided that soft is easier to get good accuracy in factory chambers.  For a custom gun with swaging die cut with the same reamer as the throat, I assume that harder alloys would be better.

I have found good loads with everythng from TiteGroup to Varget but have settled on fast powders for my soft bullets at low speeds.  The opposite may be true for hard bullets in a custom chamber.

I am a primer skeptic. I have never seen any difference in average group size when comparing primers if all the powder burned.  I have used pistol, regular, and magnum primers and all seem to produce good accuracy.

Jack Harrison came in second in production class at the 2019 CBA nationals with a score that would have won in most years but Gerry (super man) Bottiger was shooting in that class.  He wss using the NOE 80 grain bullet.  You may want to get his advice.

and i notice the mj benchresters are questioning the real value of neck turning... interesting ...

221 fireball was a xp100 chambering. I have lots of Remington 221 brass back when I was expanding necks to larger 300 whisper.

Recoil doesn’t bother me too much. Current chambering is 6.5 TKS (a handgun silhouette XP round). This is a slightly modified 6.5 BR. Still trying to get it to shoot. It does OK @ 100 but 200 is not very good. It likes 4756 but that might be the reason for poor 200-yard accuracy.

This .22 thing is purely exploratory at the moment. If I jump off the dock it will be either 22 BR or 22 PPC.

I have Lapua cases in 223 Match that were used to make the .30 Silhouette cases, you are right, they are good cases.

My CBA NR’s were shot with the 30 PPC….Lapua cases, cleaned primer pockets, turned necks and weighed bullets…sorry John! But I have been drifting towards sifter alloys. Like the lucky baseball hat…if you do well with it, guess what….you’ll wear it every time!

I have become a NOE mold fan recently, despite my NR’s having been shot with a LBT mold.

In CBA score matches, shooting a 22 caliber bullet is a handicap from the start. I love the 22BR, best 22 caliber round for varmints ever. But for score, size matters. the 30BR is very popular, for good reason. But if I were starting from scratch, to shoot score matches, I would choose a 32 or 35 caliber based on the 6BR/7BR, case.  Peterson makes 7BR cases, a small step to get where you want to be.

Everything involves a trade off.  22 are at a disadvantage in score matches comparet to 30 caliber.

30 caliber is at a disadvantage compared to 40

40 caliber is at a disadvantage compared  to 50.

Of course the disavantage of more recoil is reduced with more mass and wide flat bottoned forends allownong free recoil and almost eliminated up to 30 caliber with UNR, UNP, Pbb, however even rail guns usually aren't 50 caliber in spite of the advantage they have in score matches.

I will admit Tom is a tough dude but recoil and torque don't improve accuracy or shooter performance towards the end of the match and a 7 pound LRH is a little light on mass.

stiffer is better.  even in our .2 hole, 20 inch long, 1 inch od rimfire barrels, we used vibration tuners to chase the random angles the barrel was pointing when the bullet left  the muzzle ....  we found the same angle was best ... ( g ) ...

a lucky barrel is worth 20 percent. dangit .

A lot of ink has been spilled about a full case being needed for accuracy and this belief is the reason for Ardito's 1.5" 308 and for the 30BR. Your choice of the  22BR or 22PPC instead of a 221 or even a shortened 221 shows that you are an independent thinker.  Since I am shooting 5.5 grains in a case that holds 25, I can't critiscze. JoeB found that he got better accuracy out of 22-250s than 223s. so maybe you are on to something -- or not.

BTW I have a new Lilja barrel, (8" twist, three groove) that I am never going to use at a discounted price.  I also have a rifle on an XP 100 action, 10" twist barrel Hart  barrel, chambered on a 0.2" shortened 221 by Hart. that I havent shot in a long time and a spare bolt for 22BR if you need more parts.

Good luck with your project.

Ken might appreciate the stiffness of the 1.075” diameter “bull” barrel. The guy who did the chambering does not contour barrels, so to make CBA weight, that’s what I’m left with. This is the current 6.5 TKS chambering.

The 10-round 100-yard target photo is from a match in April 2018 where we had 20”of snow fall the night before. The load was 12 or 13-grains of SR-4756 with the 132-grain NOE bullet. At one time I may have been a proponent of the case full of powder belief, usually with VV products. But today 13-grains is hardly approaching that condition. I got tired of the sporadic availability and cost of the VV powders.

Yes, that is a Weaver 36T rifle scope. To protect yourself during recoil, you need to keep the eye relief much farther back than when using a rifle, but you still see the crosshairs and center area of the target.

The stock is a McMillan (I prefer wood). That and the rear sandbag were bought from Bruno’s back when Precision Shooting magazine was hot and heavy into long range “pistol” shooting. They ran several matches over a two or three year period but then ran out of gas.

John, the 8 twist 3-groove Lilja sounds interesting. But I’d have to find someone to cut it in half (assuming it is a regular rifle barrel), have it be close to 15” long and then contour it, hitting a finished weight of about 2.4 pounds. 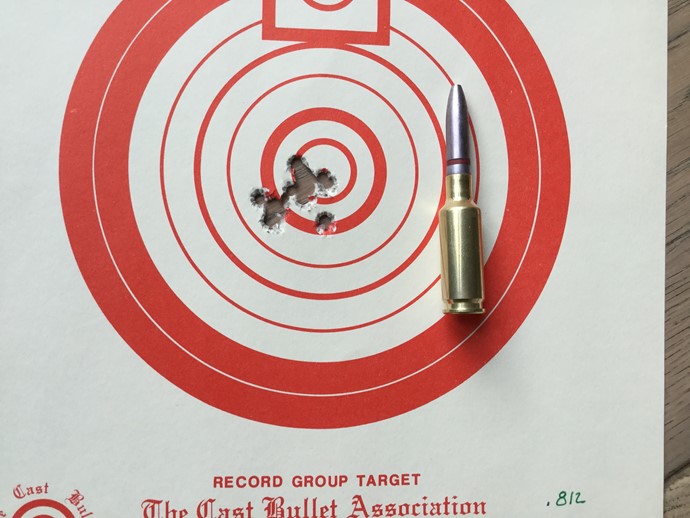 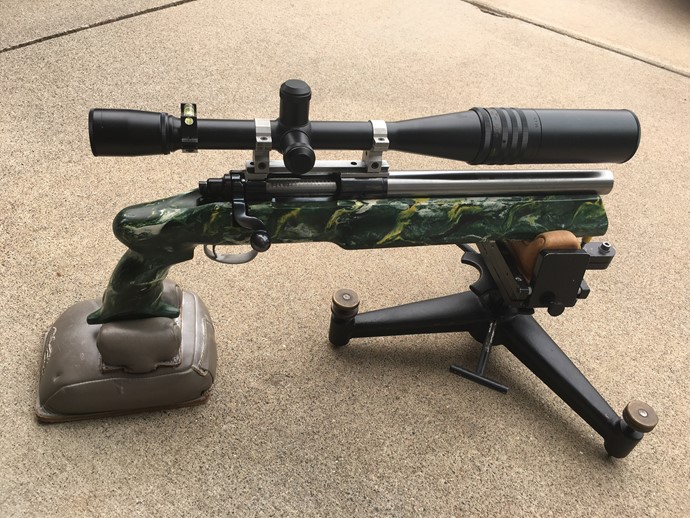 ... hi tom ... looks like what you also need is someone to cut about an inch off that sunshade ... heh ... appears to be sticking out into the fireball .

on another more serious note, i just found out that ( another ) of my heroes, Stan Ware, has passed on.  dang.  he was a wizard gunsmith in your area and was very innovative in his sport.  i just found out as i was going to suggest that he might be interested in your excellent project.

i have a taper attachment of my SB13  hand lathe and could cut and taper your johna barrel ... but i would have tears in my eyes modifying what could be a world record lilja rifle barrel... ( g ) .  also i don't have a 22 br reamer.  there are some reasonable arguments against substantial cutting on a rifle barrel after it has been stress relieved ...

hey, i have a sparkly new Lilja 15 inch pistol barrel in 0.204 ...  that would be different ... refer to Mashburn's experience with sub-caliber cast.

please keep posting your adventures with this interesting project .. ken

John, why do you say that LBT is "apparently out of business"?  The website is still up.

I certainly hope you are wrong on this.

I certainly hope I am wrong as well, but I haven't been able to get in touch with him.

If any has please let us know.

Veral has done a lot for the cast bullet gae and helped pull us out of the dark ages.  He has also made a lot of great molds.

Got out to shoot a few CBA Postal match targets yesterday. For the heck of it I drug the XP with. The load is an NOE 6.5mm 132-grain bullet in 25:1. Off the bench, 100-yards. The powder is 300MP. There is no data for my chambering but it does work well in my Savage .308 Winch., 18-grains, 173-grain LBT bullet. Using a direct ratio of the water full capacity of each case, I came up with 14-grains. I took (15) to the range with me. I shot the first one into the hill, with me off to the side, not knowing for sure what to expect. But….the muzzle flash is a lot like H-335….big and bright!

I have to thank my Wisconsin shooting friends, Jack Harrison and Alan Tyznik, for getting me to try the Alliant 300MP.

If I do drift off into .22 land, I’ll include this powder in the trials…I have almost 3-pounds of it. 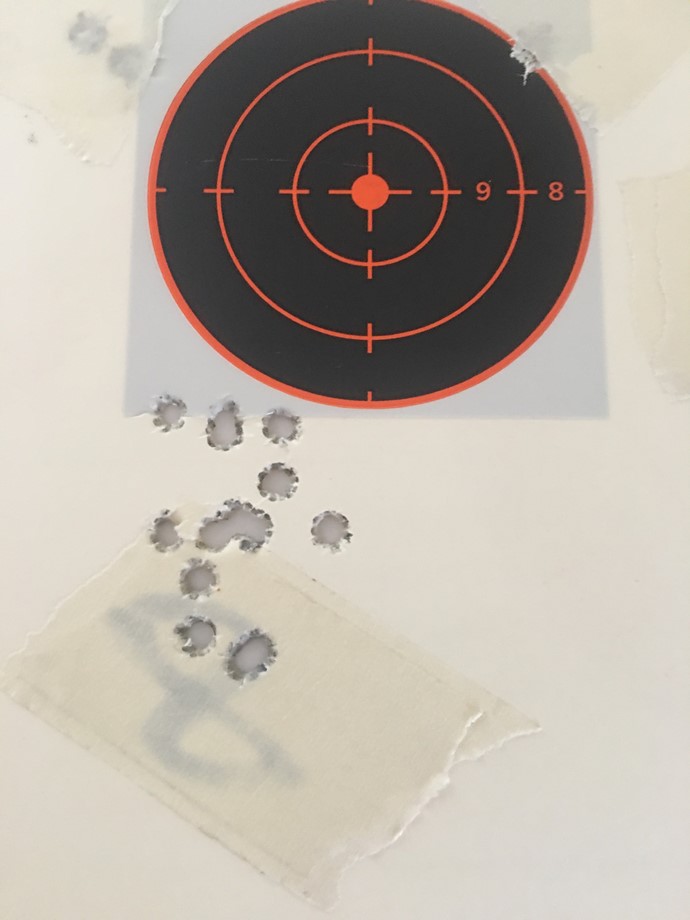