Reading the wind definitely aids in shooting efficiency. I am amazed at some of the matches I shoot at that no one else has wind flags out. The range that most of the matches I attend has 200yds. With the trees, berms and every thing else I might have 5 flags out and they are all going different directions. Got ahold of a neat item put out by Orlando Wind Flag Systems. This is a super sensitive item has sure aided in reading wind. A shooter watches the probe and the shot is taken when the probe is always in the same position. If one has the patience the wind many times cycles and allows for taking the shot when the probe is always in the same position. 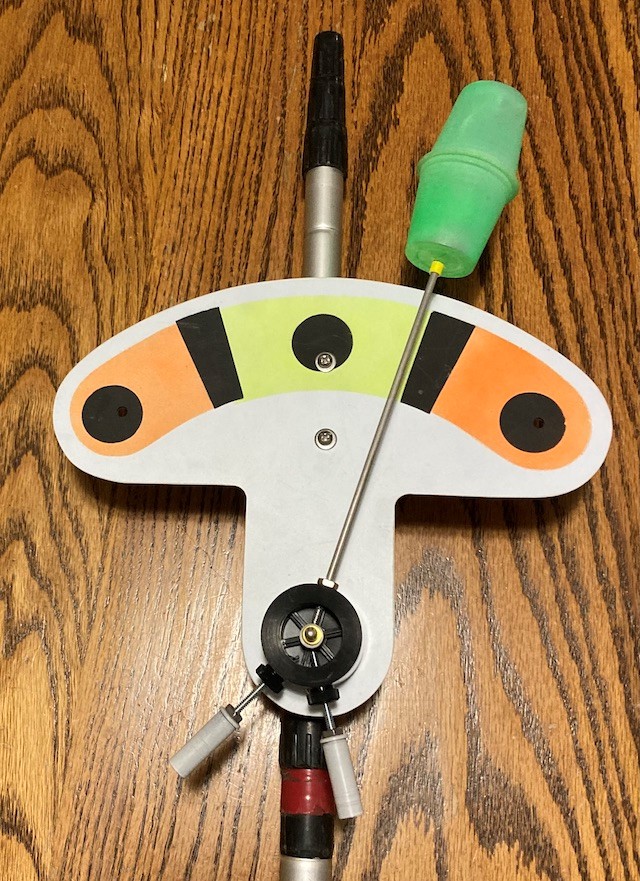 I shot Schutzen single shot rifles at Etna Green IN. The range was 200 yards with 53 firing positions.

Everyone had there own idea of the perfect wind flag.  Most shooters had a flag or wind measuring device ever few yards. It was a garden of wind flags.......They do work.  I had no need for one.  I had the two lanes on either side of me.

Enjoy your wind indicator they are a great tool.

There is an amazing variety if wind indicating tools out there.  Some days I find them invaluable, other days infuriating.  They can all be counted on to add one more element to the processes involved in accurately firing the shot.

My observations from shooting benchrest matches is that there are so many different styles and designs, each having their own characteristics and reactions to air currents, that you really have to 'learn' all the subtleties of your own flags that you have spent a lot of time shooting over. To rely on others peoples flags on nearby lanes, while they can certainly give you a general indication of direction, if you are not totally familiar with and understand the 'language' (what it is saying to you) of the particular wind speed messages being given, you might just miss the inevitable switches and change ups that can 'bite you'.

I'm not quite understanding how the flag pictured above would work for reading head or tail winds, or steeply angled winds. It seems more oriented to reading cross winds. The Orlando site shows quite a few different designs, but they don't explain how one would see the scale, on this one,  with up and down range winds? Can you explain?

Totally agree that you have to learn your wind flags, and you are so right that using nearby flags in other shooting lanes only gives one a general directions. I have seen the flags on adjacent shooting lanes doing the opposite of what mine tell me the wind is doing directly in front of me in my lane.

You asked about the wind probe that I had the picture of if it works for head/tail winds or steeply angled winds. You might think that you have direct head/tail winds, but the probe will show the slightest variation in the wind. This is where the probe comes into its own. The slightest variation in the wind direction shows up with the probe showing this clearly. Again, it is when the probe has a point where it holds steady is when the shot is taken. An example of the picture shows the probe to the right and close to a line. On that particular day with the wind, this might be a position the probe comes to frequently, then this is when the shot is take.

There are days when one thinks it is completely calm, and the probe with show a slight movement. I have thought the movement is so slight it won't make any difference in deflection of the bullet. I have come to believe what the probe is telling you. Kind of like the flags are all straight down indicating no wind, and you feel just the very slight breeze on your neck, again respond to these indications. Patience is a virtue when waiting out the conditions to return to when you have taken previous shots. The other day I was shooting a 30.06 at 100 yds. I know one needs to shoot at least five groups to get some indications of things, so this is not a valid result. But shooting a couple groups really reading what the wind probe was saying and then shooting and paying no attention to it, difference of almost .6" in 5shot groups.  Some will say, who gives a hoot. We never want to lose sight of the enjoyment or our cast bullet shooting experience.

Thanks for the explanation Bob. When setting your flags, I assume the support rod should be 'plumb' and the probe balancing weights are adjusted to a centered 'zero' position (or plumb) of the probe (?). Is this (if correct) problematic when setting the flags in a windy condition? I understand what you are saying regarding taking the shot under a probe repeating position, but that's not always possible in competition during a timed relay where you have 'X' minutes to get off all shots, record group (or score) plus sighters. Sometimes you just have to read the wind and 'chase' the group or bull, while holding into the wind. If you are shooting informal groups, testing loads, etc., without time considerations you can wait out the condition for a repeat. Do you use multiple flags of the probe type, or do you mix it with other flags of the 'more conventional' design?

In those days I only shot offhand.  That is still my calling.

The probe is set at "plumb" before going out to shoot, and is adjusted as you said by the balance weights. One is not concerned about having the probe "plumb" when setting up. You are correct at times the wind conditions are so bad that time allowed for a relay prevents using the probe for each shot. Still one tries to get as close to conditions for each shot as possible.  I attach the probe to my regular wind flags that I use as well. The probe attaches to the wind flag shaft below the regular wind flags. The company that makes the probes has two sizes, the smaller for closes to the bench, and a larger one if one wants an additional one to place farther down the lane. Looking at the probes it would not be much of a project to make your own. Good questions to help for clarification. Have a good day.

The probe is not the ultimate answer for dealing with the wind, but is an additional things that makes it easier for the rifleman to get more consistency shot to shot. I need all the help I can get.

It is certainly an interesting approach to trying to cope with the winds, and thank you for giving me the image of it's purpose and workings.

When the CBA was sanctioning cast bullet matches at my club ( St. Louis Benchrest Club) in the 1980's, finding commercially available wind flags was daunting, at best. Most of us shooters had to make our own, sometimes copying what others had done or, thinking we had a 'better mousetrap', came up with and 'kitchen table' manufactured our own designs. Some 'interesting' flags showed up on the field, some worked well, some.....? My first attempts were, let's say 'educational'. I found early on that 'shapes and colors' go a long way in identifying whether the flag was angled toward you (head wind) or away from you (tail wind), especially the further away set flags when shooting the 200 yard targets. Aluminum vanes painted orange on one side and white on the other, and Styrofoam balls (tennis ball size) painted half orange and half white mounted on the back of the vane (in a slit between the colors) with the colors positioned opposite of the vane colors, readily displayed the direction the flag was facing. Posts were made from 1/4" (or 5/16", I forget) steel rod sharpened on one end for ground penetration. On the other end was mounted a 'standard' auto parts store telescoping radio antenna for vertical adjustment as the range conditions demanded. The 'ball' on the end of the antenna was cut off and the tip rounded off. A section of 1/2" diameter rod was epoxied to the vane with a hole drilled in the bottom end to accept the tip of the antenna rod. In the bottom of the hole a standard steel BB was glued in. The 1/2" rod (now a 'sleeve') with the round BB inside sat on top of the rounded antenna tip creating a 'point contact'. This allowed for the flag proper to rotate with the lightest breeze with a 'virtually' friction free (at least minimal with light lube) mount. Running through the vane (epoxied on) was a steel wire (about 1/16" to 3/32") extending several inches past the vane end. On that wire, I mounted a rubber core lead fishing sinker (3/16 -1/4 oz.?). The rubber core held the lead sinker on the wire, while allowing it to be slid along the wire for balancing the flag. I could probably get some photos, if there is an interest.

Some of the club members (the more serious ones!) would often simply set up a number of flags in their backyards and just sit and watch the flags for extended periods observing the reactions, and the consistencies of same, to the varying conditions at hand on any given day. The belief being that this was a much more in-depth learning experience by closely studying their flag's reactions without the distractions of shooting 'over the flags' at the range.

Another good way to understand the effects of wind (or try to!), if your home situation/neighbors allows for it, is to shoot an air rifle over wind flags in your backyard.

One last thought regarding the probe type wind flag and firing when the probe repeats a position. Just thinking out loud, and having never used a probe flag, it seems the approach might be more successful in group shooting matches where only group size, and not group position on the target, determine success. In score shooting, with the objective being hitting five separate bulls, would seem more of a challenge, to me anyway. Again, with time being a critical limitation. I  know, you have to 'hold off' either way, and maybe my thinking is 'old school'...if not 'old dog' problematic!

Thanks for taking time to share about wind flags from in the 80's, very interesting. The probe just as wind flags is not always the end all for wind reading in every condition. Good flags with the addition of the wind probe has sure been beneficial with better groups. Thanks again for your input.