I am starting reloading cast bullets and found load data, now my question is

Can i use an other powder but with the same burn rate?

Maybe a stupid question but need to know

The short answer is just because they line up on the chart doesn't mean they are the same. Cartridge dimensions and bullet weights all make a difference. Use the data you have and follow it closely. Don't start experimenting until you have some experience. What is it that you are loading? There may be guys here with the exact experience the the cartridge you need. Squid Boy

Agree with Squid Boy, the rate is determined inside a testing "bomb" and doesn't not account for rate of burn changes as pressure goes up. The classic is Hercules Blue Dot that 30 years ago was discovered to be a good preforming powder at 20,000 CUP. And that is as high as Hercules ever tested it for pressure (same as all their shot gun powders). When folks started loading it up to 357 pressures, guns started getting loose real quick and sticking cases. Over 20,000 CUP pressure went up very very quickly and every shot was a proof plus load. All of this is in the old Handloader Magazine by a fellow named Clay Harvey. HTH

If we are talking about loads listed as maximum or even 70 percent of maximum I would agree with Squid Boy and Ric.

Powders with similar burn rates as published by Hodgdon, Western, etc can be safely substituted at the very low pressure levels caused by five grains of powder in a modern rifle in those chambering.  The load may be unsatisfactory because of poor ignition, unburned powder or fouling problems but shouldn't be a safety problem.

At the very low level of 5 grain for these calibers I believe you will may have better luck with burn rates faster than WC 296 and closer to Bullseye, TiteGroup, 231 etc.

I have been doing such things in 222s and 223s for about 60 years and have never seen any indication of excessive pressure. My match cases used for such loads are on their 55th reload.

I agree with Ric, the burn rate can change with the increase in pressure. Especially with double-base powders where the deterrent chemicals that control burn rate are set for lower pressures. Pressure and heat are intro-controvertible. When a powder is a shotgun powder, it is tailored for a lower pressure limit than a handgun powder.

Over the years, I've learned the hard way to read the powder description and follow the manufacturer's recommendations. I have blown up one rifle from SEE (Secondary Explosion Effect) with reduced loads. IMR 4227 in a .308 Winchester with a SAECO #315 set with .015 witness mark on the nose to show it set in the lands. Savage said they had never seen an action with that level of destruction that held the bolt. A testament to the Savage 112 action design.

I am starting reloading cast bullets and found load data, now my question is

Can i use an other powder but with the same burn rate?

Maybe a stupid question but need to know

Winchester 296 comes with a warning to only use in full power loads.

I saw a Remington 700 Varminter in.308 Winchester using a reduced load of 296 blown up to where two men with 2X4's against the bolt and one man with a big hammer to pound the bolt open. Light continuous taps increasing in effort finally opened the bolt without braking the weld.

Hey , For me it is indeed for shooting. 225-70-RN found load from 5grain to 5,5 grain titegroup. The powder is hard to find so i was thinking take Lovex D060 5grain and see

Titegroup is not that hard to find, Grafs has it in all offerings.

Also you did not state where your data is from. If the internet, I would stay away from it until you had years of experience. As many manuals new and old as you can afford is well worth it.

Yipes !! . I must be living on borrowed time. IMR 4227 has been my powder for reduced cast loads in the .308 for over fifteen years. As well as the 30-06, 7x57 Mauser and others. Buy eight pound jugs at a time. Pretty sure that I have burned easily over thirty pounds of the stuff and haven't blowed myself up yet..

"Can i use an other powder but with the same burn rate?

"Maybe a stupid question but need to know"

That's not a stupid question at all. It's an intelligent one when it comes to charges and varieties of gunpowder. I have an idea of what I would do in your situation but hesitate to post it.

If you haven't already, why not email those European and the US powder companies with your dilemma and maybe find out which powders can be cross referenced ?  They would surely be the people who would know.

Sorry about the mistake in my last post I forgot you are shooting the 70 grain bullet.

SEE is a worry because it seems to strike randomly.  Most authorities say it is limited to reduced charges of slow burning powders.  There have been very rare blowups reportedly with faster powders where it could have been SEE. I think it is safe to say that the most danger to cast bullet shooters using reduced loads of fast to medium burn rate powders is from double charges or other mistakes in the powder charge or a bullet obstructing the bore. Better to worry about those in my opinion.

If small charges of fast burning pistol powder caused SEE more often than being hit by a falling airplane Mr.Dupraz, I, most cast bullet shooters, and most pistol shooters would have already have had it happen to them.

I run samples through QuicklLoad for ,223 Remington with the Lyman 57 grain bullet, the results show low pressure and 1,000 to 1,200 feet-per-second for velocity. The pressure is so low that I fear there will be unburned powder in the barrel.

The best results are for Alliant 2400.

While QuickLoad is a simulation, it does give an idea of what is there. My results from QuickLoad closely approximate firing tests at the range. I even figured out how to simulate breech-seating with QuickLoad and the results match the results in target at 100 and 200 yards.

"If small charges of fast burning pistol powder caused SEE more often than being hit by a falling airplane Mr.Dupraz, I, most cast bullet shooters, and most pistol shooters would have already have had it happen to them."

Whew !!! That's a relief. I know that I won't live forever but surely don't want to hurry things up any either.

makpeter, please tell us the cartridge you are working with. Many of us have excellent computer programs that can compare powders. My understanding is that Lovex D032-03 is much closer to TightGroup than D060 but again those positions are subject to a number of other factors. Please give us all the details of what you are doing will help a lot. By the way Belgian Grimbegen dark beer is the best. Thanks, Squid Boy

Hello shooters, for the first time after many failures I finally have sucses

After sometimes I couldn't hit the target, I was almost ready to give up 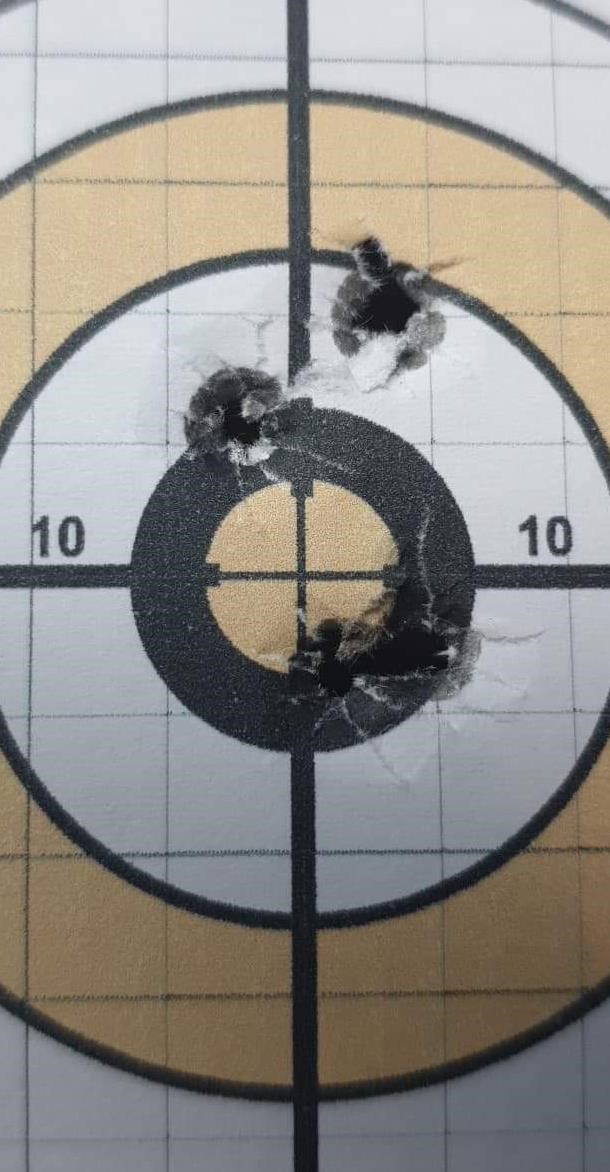