If so, making an old 32 cal revolver into a 16" + barrel, ?Wire? stock, ?rifle? seems easier than expensive old shotgun conversions. And, 6 shots.

I've got an M10 that could be turned into a rifle, or a rifle/pistol combo. Anybody got a 35 cal barrel? During my Contender days I had many barrels and both 30-30 and 6.5 TCU carbine barrels. I remember a big stink about legality of carbine brrels and what the gun was made as. Anyhow, a 6 shot short light 38 will probably kill a rabbit.

Probably the BATF website has some info on the legality.  If the gun is old enough for curio & relic status, that might help.

I think that putting a butt-stock on a Luger, for example, is OK because the Luger is C&R.  Regardless of barrel length.  I think.

As I understand it, a Contender frame that was built originally as a pistol, you can put any length barrel on, but one built as a carbine you can't legally put a pistol length barrel on it, unless you get a SBR stamp for it (which would not make any sense, just use a pistol frame)

Unless they have changed the rules; You can make a rifle from a pistol but not a pistol from a rifle.

A rifle converted to pistol is defined as an SBR ( short barreled rifle), either pay the 200 tax stamp, wait a year, then make the change....and follow rules or go to jail.

Pistols can be longer, rifles and shotguns can’t get shorter. That’s the rhyme to remember.

Contenders after the first few years were all registerd and sold as pistol actions and release all concerns. Encores as well.

Any salesman dumb enough to have listed a carbine contender as a rifle was a jack-hole. There were a few.

Hope that helps. A savage striker is a model 10 rifle modified. Can’t make a model 10 into a striker. You can do as you please with a striker.

I remember that "Choate" sold a 2" bbl extension to add to a 14" bbl to make it legal when you added a Buttstock at the rear end.

When I say: "Make a rifle out of a pistol>" I mean : take the action -- frame-- and put a longer legal barrel on it and a shoulder stock.  With a barrel of 16" it is now a legal rifle.

And proper oal equal to or in excess of ATF rules....or it’s an SBR.

10" Bbl w/extension attached in compliance for use as rifle 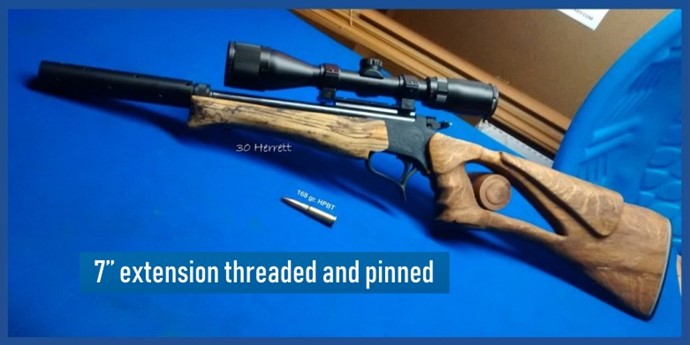 I shoot, therefore I am

Some years  ago there was an article in the American Rifleman concerning a Hi Standard pistol with a rifle length barrel and a detachable stock,They got by with it because the stock was attached to the barrel instead of the pistol frame.I seem to recall that the BATFE finally decided that was not a legal conversion.