I decided to lap an old mould to better fit a new (to me) 1898 Krag rifle.  The victim was a Lee C309-200-R, single cavity.  After lapping I scrubbed the cavity with hot soapy water, then rinsed in hot water.  After drying the mould on the back of the pot I dipped the corner in the molten lead (as recommended by Lee) and started casting bullets.  (I seem to remember the recommended time for dipping the corner of the mould in the lead was 8 seconds, but the instructions with my new mould say at least 30 seconds, but the pictures are of a 6-cavity mould, even thought they came with a 2-cavity mould.  Whatever.)  They were pretty wrinkly, so I smoked the cavity, which didn't help much.

So I thought, "Let's burn that grease out!"  (The valve grinding compound used to lap the mould is in a grease carrier.)  So I dipped the corner of the mould in the molten lead and waited.  After about 30 seconds it started to smoke.  It smoked for about a minute and a half (still in the lead), and I left it for about a minute more.

Just for grins I filled the cavity.  It took about a minute for the sprue to solidify.  Yeah, it was hot!  The ejected bullet was quite frosty.  I let the mould cool to "normal" casting temperature and proceed to cast a handful of bullets.  No more wrinkles.  I'll add a photo when I figure it out.... 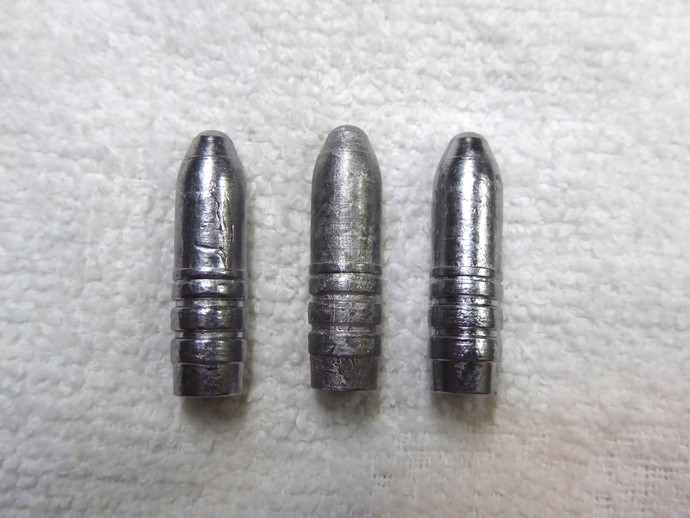 obviously your old Single cavity Lee mold has died ... and is

queries must be submitted in written form and selected examples will be answered on the second friday of the month except in months ending with a y .

not to hijack thread but i have a related problem. i got an aluminum mold from Accurate Molds for my 35-30. #36-240H. using a lyman 25 mag or whatever the hell its called. 95% of the bullets look like the wrinkled one in the above pic. all wrinkles around nose. i got a hold of the guy at Accurate, he said mold needs no break in, just heat pot to 800 and cast away. i DID clean mold with brake cleaner and smoked it real good first though. thought i was losing my touch so pulled out an old lyman 2 hole 30-30 mold. cast 50 of em w/not a wrinkle etc. i have a lee 6 banger for 45 colt that throws 5-6 beautifully each time. out of maybe 15 of my molds this one is giving me fits. oh well. maybe needs more break in. its a 3 holer.

Glenn: Back to your original statement: 1. How did you lap the mold and 2. how much did it open up?

SGT69, The cutting oil Accurate uses is hard to get out, Flushing will not do it, and "smoking" the cavities just makes it worse. Clean it and run it through several heat and cool cycles, and it will behave.

Ross, I drilled the base for an 8-32 tap in my lathe, ran the tap in and left it stuck in there, then rolled the bullet between 2 steel plates with valve grinding compound slathered on them.  I then laid the bullet back in the mould cavity and twisted the tap with a tap handle.  When the twisting got easy I wiped the compound off the mould faces and twisted some more.  I may have applied more compound as well.  I did this with a couple bullets, then cleaned it all up and cast a few.  Repeated the process with the new castings until I got the size I wanted.  It took far longer than I expected on an aluminum mould, and I think it was because the valve grinding compound had more grease than grit.  After rolling a bullet between the plates I wiped the excess off and looked at the bullet with a magnifying glass - there weren't very many pieces of the grit.  This was from an old tin I got from my grandfather's stuff.

Add edit - opened it up about .002-.003" as I recall.  Still wasn't big enough for the intended rifle.  See article in the next issue (shameless tease).

thank you! i will do that. and i apologize if i jacked the thread. didn't mean to.

SGT69, The cutting oil Accurate uses is hard to get out, Flushing will not do it, and "smoking" the cavities just makes it worse. Clean it and run it through several heat and cool cycles, and it will behave.

did it and its getting much better. when mold gets several pours at 800 deg in it grease or something begins to liquify and had to be wiped off. thank you for the tip!

I usually drop new molds ( Lee, Lyman, NOE, whoever) in a pan of water with a little Dawn dish soap and boil it about 20 minutes or so, then drop in a boiling clear water rinse, then dry. That gets almost all the cutting/corrosion inhibiting fluids out of any micro-pores in the metal. I need to use distilled water because the water here is very hard and leaves discolored spots if I don't. Lube the places that need it, preheat it and start running lead.

I usually drop new molds ( Lee, Lyman, NOE, whoever) in a pan of water with a little Dawn dish soap and boil it about 20 minutes or so, then drop in a boiling clear water rinse, then dry. That gets almost all the cutting/corrosion inhibiting fluids out of any micro-pores in the metal. I need to use distilled water because the water here is very hard and leaves discolored spots if I don't. Lube the places that need it, preheat it and start running lead.

i actually have a lee mold on the way in. thanks, i'll try that

I have a mould from Accurate that has driven me crazy ( not a long drive ) i have cleaned it with everything under the sun cast with it many times and still a problem... there is one place on the nose of the bullet that has a wrinkle in it no matter what i do. I have gone ahead and shot them and it dosent seem to hurt accuracy but bugs me. i even got to the point that i tried easy off oven cleaner. The oven cleaner worked the best but i am not sure i would recommend it as a common practice. i see no damage from cleaning this way. and the bullets have just a little wrinkle now. joe g.

After you boil the blocks and get them pre-heated, you might still need to give them a LIGHT smoke coat in the cavities. Don't do this with cold blocks, water will condense on the blocks from the burning butane or whatever. They don't need to be black, anything you can see is thick enough. After a few hours of casting, it seems that a clear layer of high temp aluminum oxide will form and they won't need to be smoked anymore. I've had to do the same thing on iron molds after lapping the cavities until they oxidize a little.

the lee 6 banger mold arrived, i boiled, rinsed, lightly smoked and tested it. out of the the chute it threw 4/6 good ones. next it threw 5/6. 50 or so later it averages 5/6. will continue tomorrow as just made and drank a huge margarita and feel a nap coming on.