After deciding to try cast bullets in my .218 B Contender pistol I ordered a lee 225-55 mold. But when It came, I soon discovered that the nose of that bullet was so oversize that unless the casting was shoved down into the case neck, it would not work and was basically unusable. A call to Lee was no help.

I then got an RCBS 225-55-SP from Midway that did drop a bullet with a nose that would work but could have been better.

Enter the NOE nose sizing kit and bushings. When nose sizing the .30 and 7mm cal's , I could feel when the bottom of the bushing hit the front driving band of the bullets so that's what I use as a stop. 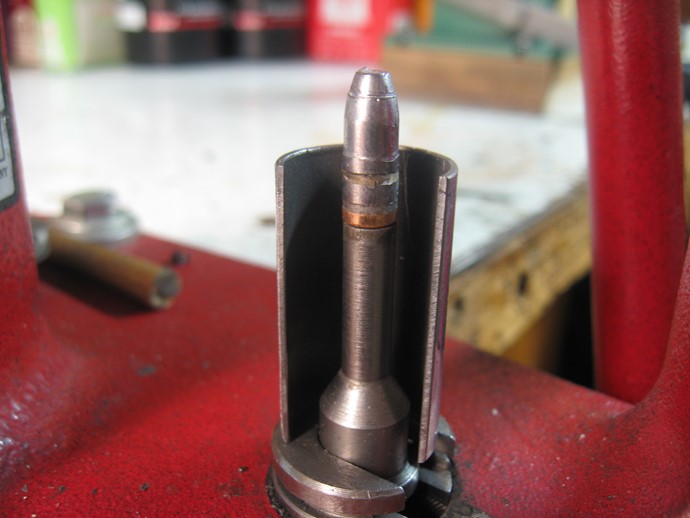 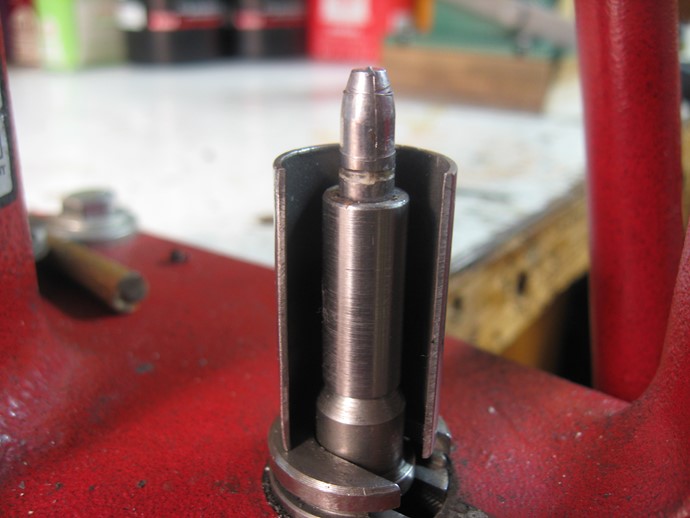 So I made a simple positive stop sleeve from an expended CO-2  cylinder. It stops the press ram when the front of the front driving band is just about to enter the bottom of the nose sizing die at exactly the same point every time. And made that Lee mold usable. Now the front driving band can meet the beginning of the leade in that 218 B Contender barrel.

A very nicely crafted adjustable nose sizing punch arrived in todays mail. A big thanks to Mr. Richard D for taking the time to make one up for me. Only wish I wasn't such a computer Tard, I'd love to post a picture. Looks like the second version that Richard posted and has an adjustment screw centered up through the base like we discussed earlier in this thread.  Great job Richard.  Gp

The nose size length is adjusted by adding/subtracting washers, choosing washer thickness, and the long nut This system works well for .22 and .30 and 7mm bullets so far. 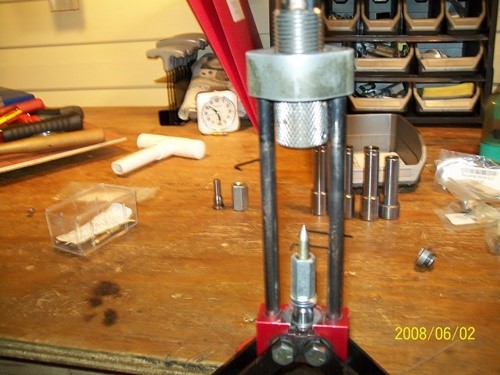 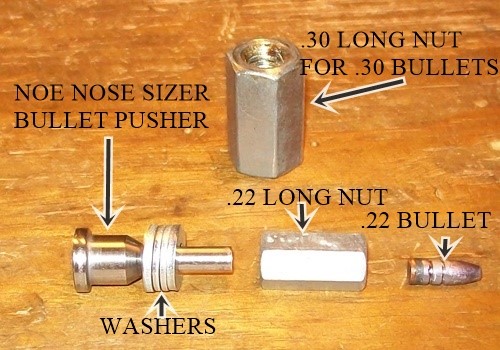 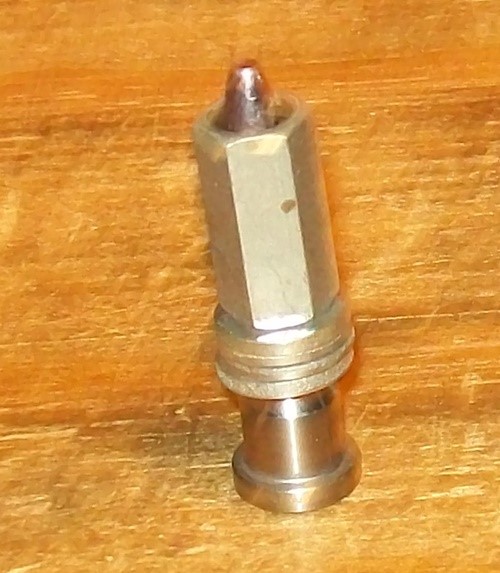 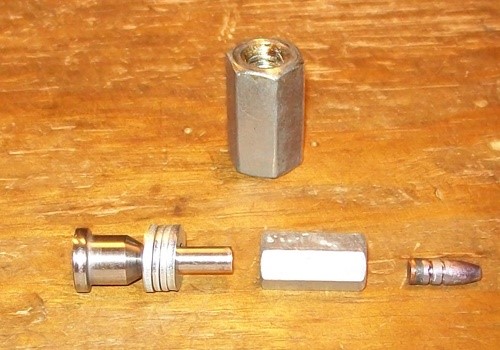 That's a very good point Richard.  Maybe a sliding push shaft under the bullet and the adjustment screw tapped up from the bottom  would be easier on the base of a plain base bullet. I must have too much time also. lol  been thinking on this since the OP.

Nothing special, just a lot of free time these days.

No reason why that wouldn't work. Use an allen head cap screw with the head same diameter as the base of the bullet. Would be fine for GC"d castings but wonder if the bottom of an as cast bullet would be imprinted by the head of the cap screw due to the force needed to nose size.

That's looking good Richard. To carry on with my thought so that one could use the holder for different length bullets of the same caliber and regulate how much of the nose you wish to size, what if the holder was center drilled and tapped, then fitted with an allen wrench adjustable all thread for height adjustment. This could be held in place with a set screw tapped in from the side.  I wish I had the tooling and skills you guys have for machining but it's getting late in life to start another tool addiction.  Gp 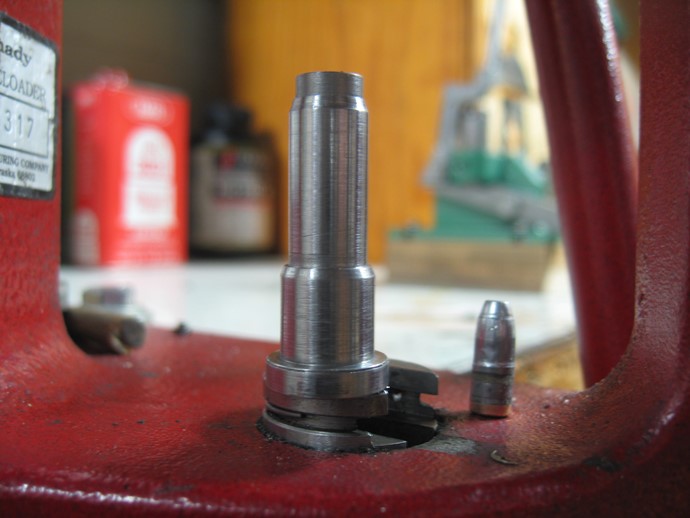 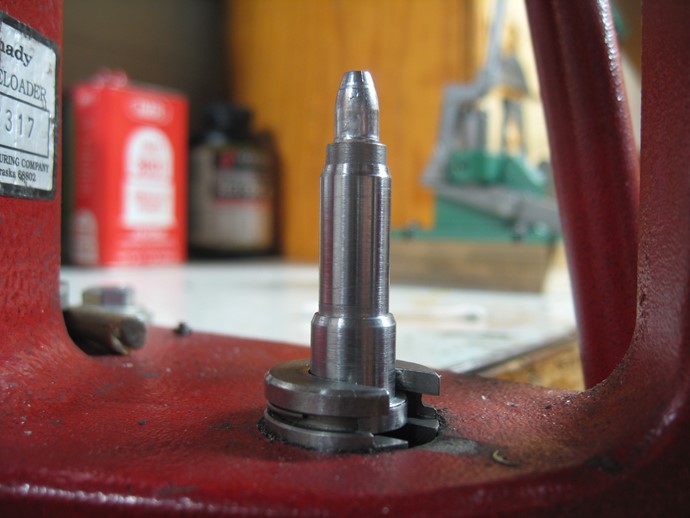 That looks good! Would it help if it were about 3/4" shorter? Would leverage be easier?

I believe these nose sizers really do help with accuracy. I nose size my 224 80 grain bullets to remove the raised parting line before bumping. Bumping makes bullets more round and fatter at bands if you choose.

You pilgrims are getting way too complicated for this feeble mind.

Just finished turning one out from a piece of 5/8 bolt that was in my junk box. And, following my kiss principle, didn't turn the step, In reality, wouldn't have been much of a step anyway.

Works, but found out that I have to shorten it  about .020" to expose more ot the bullet  so that the front of the driving band just enters the nose bushing. 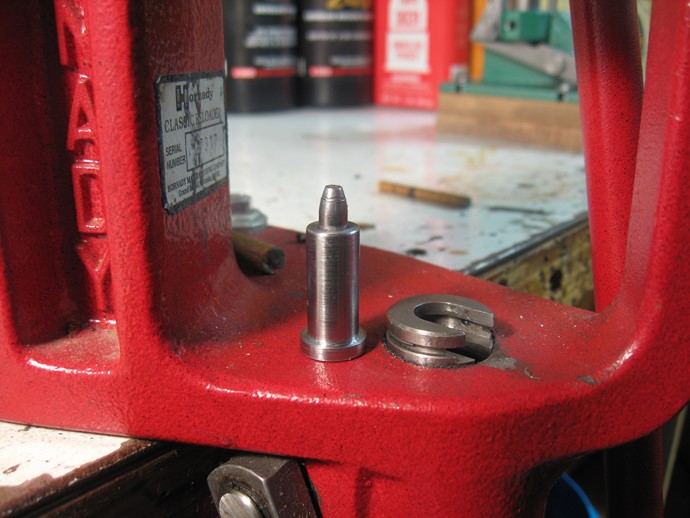 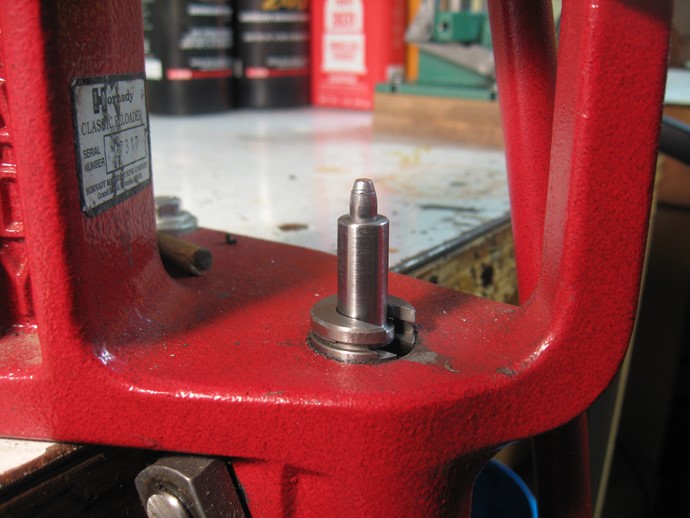 Oub12: The spot where the shell holder bottoms against the bottom of the die is a fixed amount unless the bullet sits on the adjustable threaded post so not all of the nose is exposed to the bushing above. I didn't make that very clear in the last post. Gp

Or you could make a self aligning disc about 1/2" thick to simple rest on top of ran (without shell holder in place). Bore a hole in small disc or plate to depth and diameter size you need.

He designed his sizer/bushings to be  used with larger calibers also, which is why you screw die end from underneath. The knurled end may be a little too thin to thread...I know it would be more difficult to thread...good idea though. 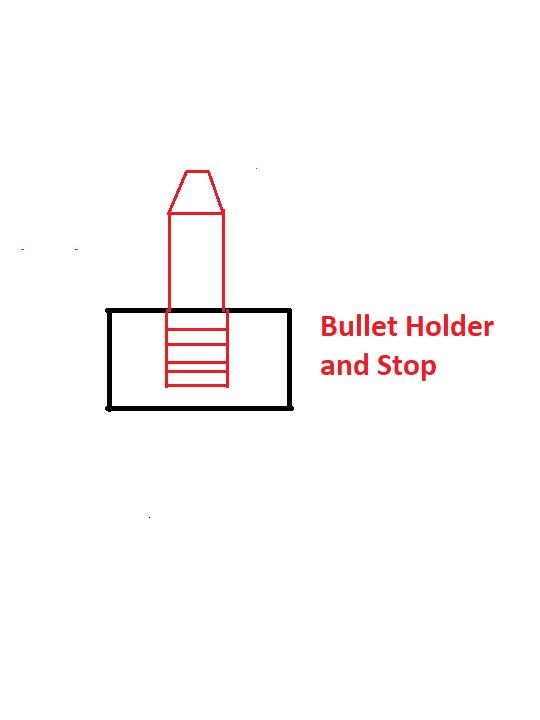 OUB12: I like your idea for the bullet holder. To take it one step farther one could thread the upper portion into the base to adjust how much of the nose you wanted to size. Gp

You should read The Fouling Shot #250 Nov-Dec 2017 and #251 Jan-Feb 2018. Both have a very interesting article called "On The Road To Records" written by Bob Birmley.  It goes into a little detail about how loaded round should fit inside neck of chamber. This snug fit may require a custom chamber or a fatter bullet.

He uses just one case in competition and reloads between each shot. Pistol is record breaker

"Have you ever tried reloading and shooting the same single perfect case (tight neck tension against chamber wall) at the range. Indexing case and bullet to same spot then tapping cartridge into chamber before closing and firing. A slightly longer bore riding bullet helps also."

No I haven't. There is for all practical purposes, no free bore in that 10" octagon .218 B barrel. And when the action is open, the round is prevented from fully chambering by the extended extractor. So then the standing breach would have to force the bands into the leade as the action is closed, which it will not do to fully chamber. Also, I have found that the best accuracy with this Contender comes when the loaded round chambers with no resistance while maintaining at least .001" headspace.

Not counting the groups in my previously posted "Contenders get no respect" photo, the last nine five shot groups at fifty yards with the Lee 255-55 and RCBS 255-55-SP bullets averaged right at 1.00 " C to C.. They both seem to shoot about the same so I have called that good enough. More than likely as good as I can expect or shoot anyway. I'll probably be eating the above at the next range session but that's the story so far.

I like your idea of the bullet holder and stop. I have made some push pins rather than order them from NOE but have never thought doing that. Better than the sleeve affair. The distance from the bottom of the attached GC to the front of the driving band on both the Lee and RCBS bullets is about the same so one dedicated tool would work for both.

I could machine a bullet holder to act as a stop. Drill and Ream to desired band diameter and depth. 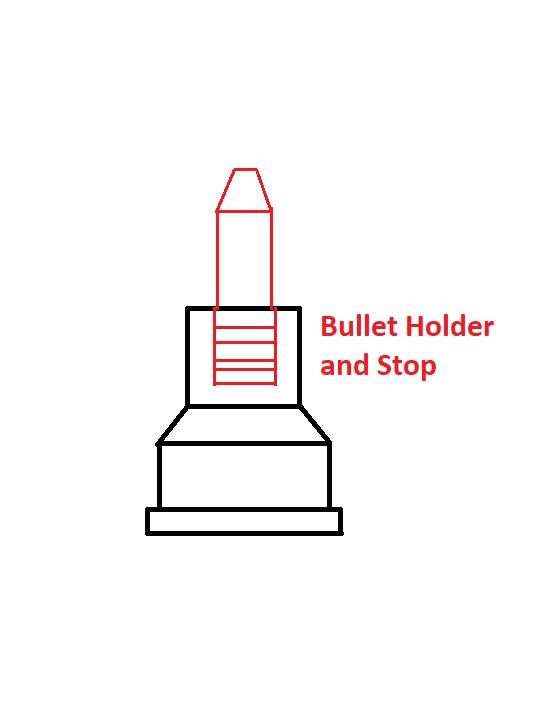 Have you ever tried reloading and shooting the same single perfect case (tight neck tension against chamber wall) at the range. Indexing case and bullet to same spot then tapping cartridge into chamber before closing and firing. A slightly longer bore riding bullet helps also.

I bet that short bullet would be more accurate if you could size down the front band to the same diameter as bore ride section. This would chamber bullet more deep... helping with strait alignment in bore.

Not a big deal but it solved a problem none the less. And, I finally figured out how to take decent  close ups with my little old Cannon Power Shot, I think.

This forum doesn't get much use and I seem to have an over abundance of spare time any more until this crazy weather straightens out. or the shooting season starts, or both. Just finished blowing the snow out of my drive way again!.

Turns out that that Lee outshoots the RCBS, so far I think.

I can see where shortening the push pin would ease the leverage but I really don't find the effort needed objectionable, so far anyway.