With all the pressure testing that has been done over the past few years, I decided to conduct at least 8 more tests. With what we do have now, there is enough data to show a relative linage between CUP and PSI now for the 44-40. We still have a few missing links that could use some closure.

I tried to simplify what I have done the best I could in the following charts. These charts are always subject to updates based on better and more reliable data and are subject to change without notice.

They can be seen here: Click the tabs at the bottom of the charts.

For years I have seen reports to indicate that the 44 High Velocity loads produced 22,000cup. However, this February 14th, 1917 document below may indicate otherwise. It looks as if the WRA Cartridge Engineering Office documented 18,000cup service pressures and 23,500cup Proof Pressures. Looking at cartridge examples from the Draw Set to late production, the only component that looks to have changed is the primer. The WRA "Balloon Pocket" appears to be the same through the late 1930's. The powder charge dropped from 20gr down to 13.9 in some examples while the velocities advertised an increase. From 1,500fps in 1903, to 1,564 by 1925 and to 1,570fps by 1938.

This also shows the earliest documentation, I have seen, that the normal loads have a service pressure of 13,000cup and a Proof Pressure of 16,500cup. Keep in mind that these normal loads used between 13gr and 17gr of Dupont No. 2 rifle powder since 1895 and was used until 1925, thus this Service Pressure directly relates to this particular powder and load for this cartridge. Black powder was still offered during this time and the document does not stated any difference between black powder and smokeless powder loads. Certainly with the information therein, they are referring to smokeless loads. 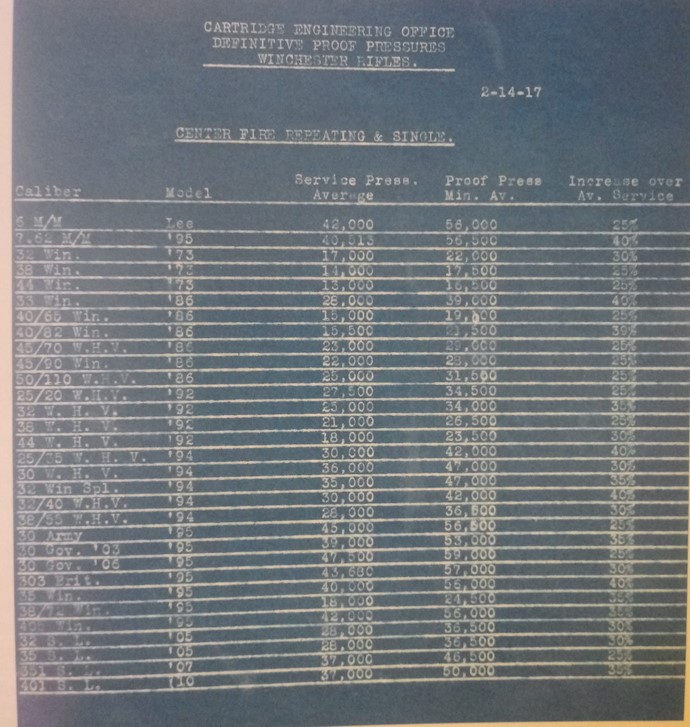 Simply put, Winchester loaded their cartridges to Service Pressure loads, but over time they seem to downgrade performance.

Below, Sharp's "Sharpshooter Powder" handloading data does not indicate a "max" load but lists loads that exceed 13,000cup as well as 18,000cup loads. Loads with a Service Pressure of 13,000cup are listed but pressures not noted. Load pressures of 14,000cup and higher are listed and noted. Winchester started using Sharpshooter powder in 1903 for their 44 WHV loads but switched from Dupont No. 2 to Sharpshooter by 1926 for all 44-40 smokeless loads.

Testing the following Sharpshooter, and in other charts Dupont No. 2, will not be easy and several obstacles could hinder accurate results. Cases used will be period cases but new primers will be used as well as the Winchester bullets where needed. 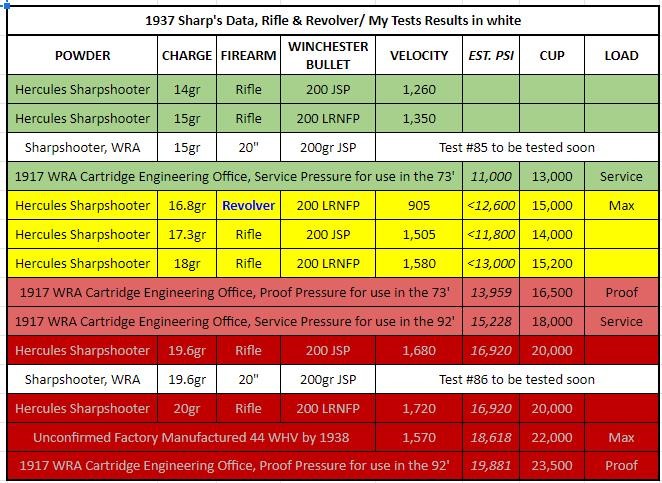 With the above tests results, if successful, the below chart can be updated to give even better data and cup/psi comparisons. Hopefully we can get a better idea what the 1914 era HV loads actually produced. 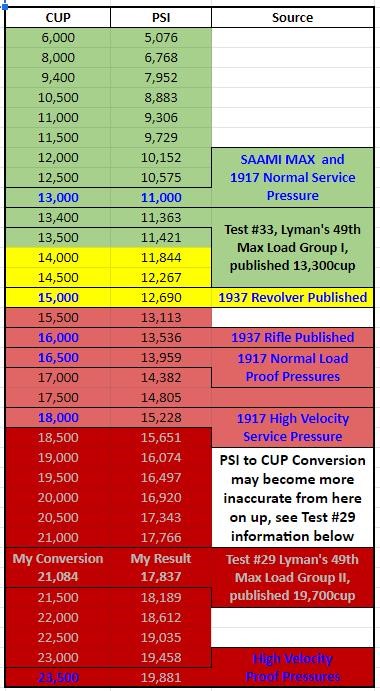 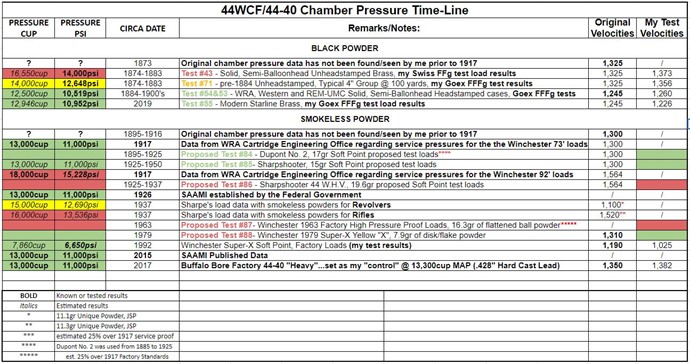 It may take a week or so before I can get the tests done, but this will give something to ponder over until then. 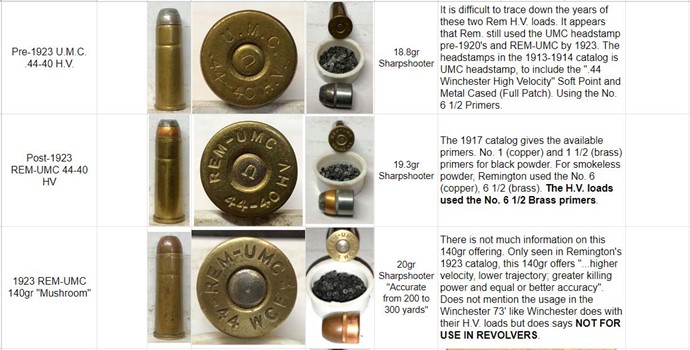 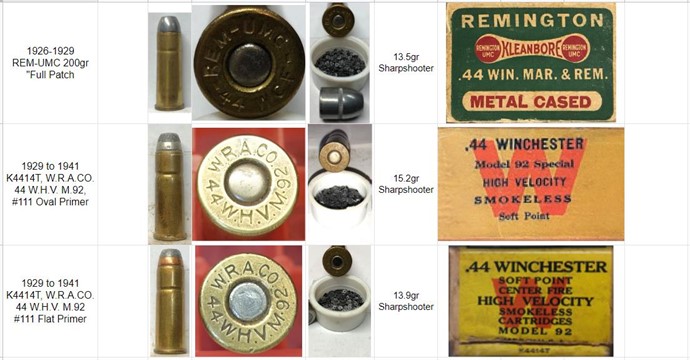 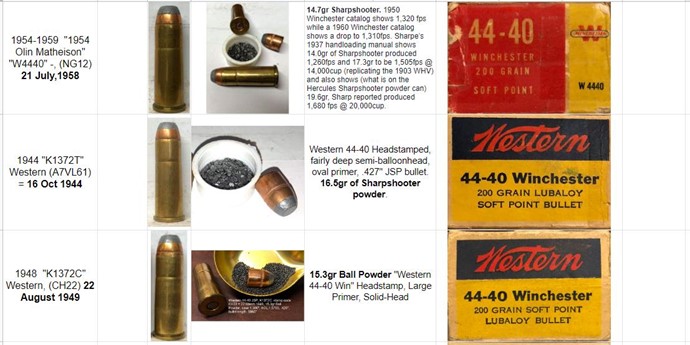 I have everything "cold" set and ready to go. Now I hope to remember to "save" the bloody shots!!!!  There ain't no repeating on some of these!!!

I plan on heading to the range in the morning for the preliminary shots to make sure all is really well. Test a few "known pressures" then shoot the control loads and double check the settings. Once I double check then I will always have a "control" and won't have to rely on factory ammo as a control any more.

I don't plan on shooting the older powders until the 18th when I visit my folks in SC. There I can shoot in 100% private with no distractions. I am also going to load up some 7.0gr to 7.5gr WST loads to check.

Thanks to Larry for the help and maybe I can check more later on this year or next if powders and primers are a bit easier to get and maybe cost a lot less. 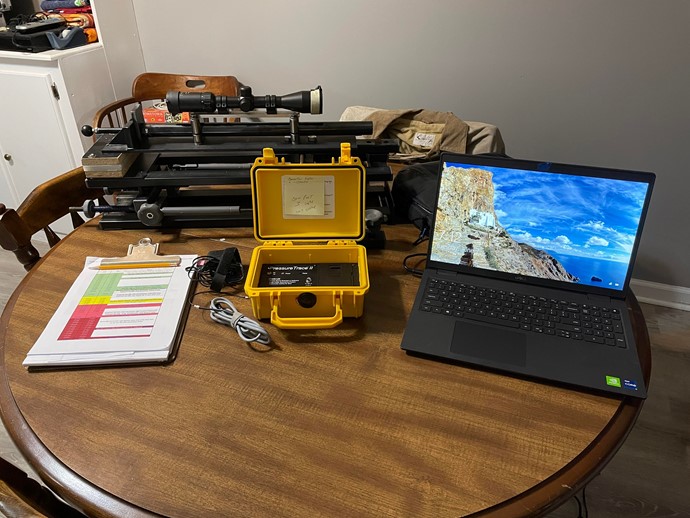 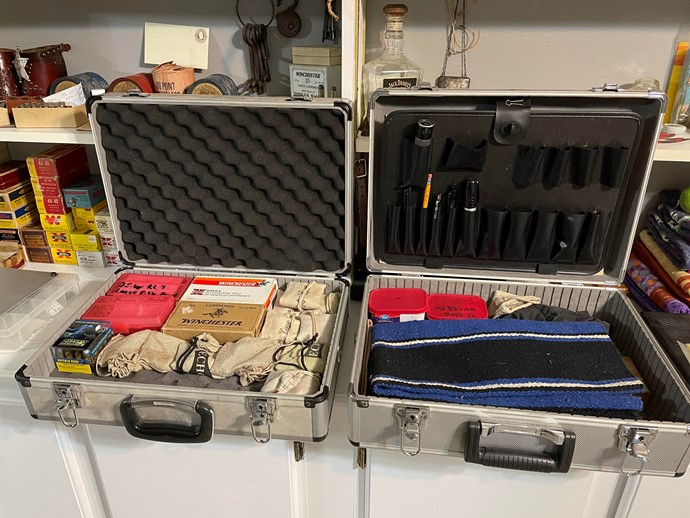 I am happy to say the the tests did well today and was actually uneventful. I plan on finishing up the proposed tests the weekend of the 18th.

Preliminary Results - subject to miscellaneous adjustments of -79psi only.

Soon I will have revolver and carbine velocities of some WRA 200-grain softpoint in balloon head cases, from a "Bullseye" box, believed 1930s. Will use my 4-1/2 inch and 5-1/2 inch Colt New Service revolvers from the 1920s and a 1977 Winchester 94 assembled in Montreal, PQ in the old Cooey Works for the Cdn. trade. I understand many of these also went to Oz, as they were duty free if assembled in Canada vs. in the US.

The 44-40 Google Docs "Pressure" Page has been updated to reflect the 3 new tests 1A, 2A&2B (re-tests for "control"), and test 90. I also updated a few other items by including the 1917 WRA data and highlighting Lyman's max loads that were previously tested.  I will update other items as well as dates etc. the week of the 20th.

Made some test shots this morning before it got hot. All is falling in line but wanted to share the 44 W.H.V. 10 shot loads with 19.6gr of Sharpshooter powder

Soon I will have revolver and carbine velocities of some WRA 200-grain softpoint in balloon head cases, from a "Bullseye" box, believed 1930s. Will use my 4-1/2 inch and 5-1/2 inch Colt New Service revolvers from the 1920s and a 1977 Winchester 94 assembled in Montreal, PQ in the old Cooey Works for the Cdn. trade. I understand many of these also went to Oz, as they were duty free if assembled in Canada vs. in the US.

The result is higher pressures for slower velocities

Thanks for this. Good info!

Some more data from this morning and yesterday. I will get complete data up by Monday afternoon. 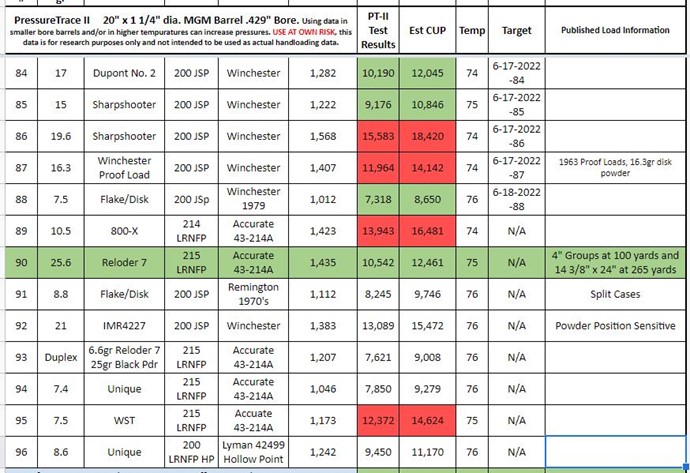 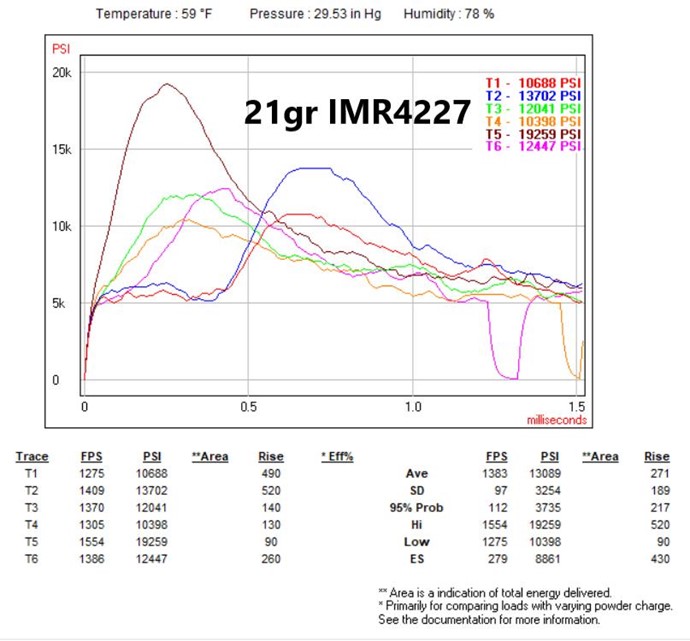 I really enjoyed this test.

I acquired two full boxes of Winchester Red Label smokeless Dupont No. 2 charged cartridges dated 1914. These are WRA headstamped with a large balloon pocket. I took 13 of the best looking cartridges and dissected them. I replaced the 1W primers with modern small pistol primers and replaced the LRNFP bullets with 200gr JSP. I recharged each cartridge with 17gr of the wonderful smelling Dupont No. 2 powder.

The following pressure curves show a slow burn rate, slower than black powder and more consistent. The velocities are a bit slower than advertised. Peak pressure is also lower than the original replicated black powder charges, as published data has indicated. 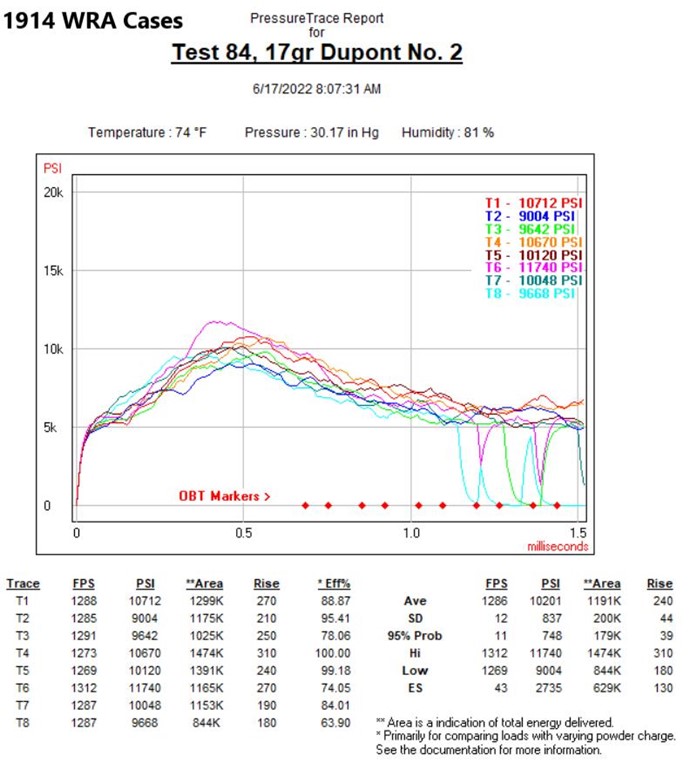 I also tested a Duplex load.

They produced reliable velocities and low pressures and are worth more testing, but I will not be able to do it. 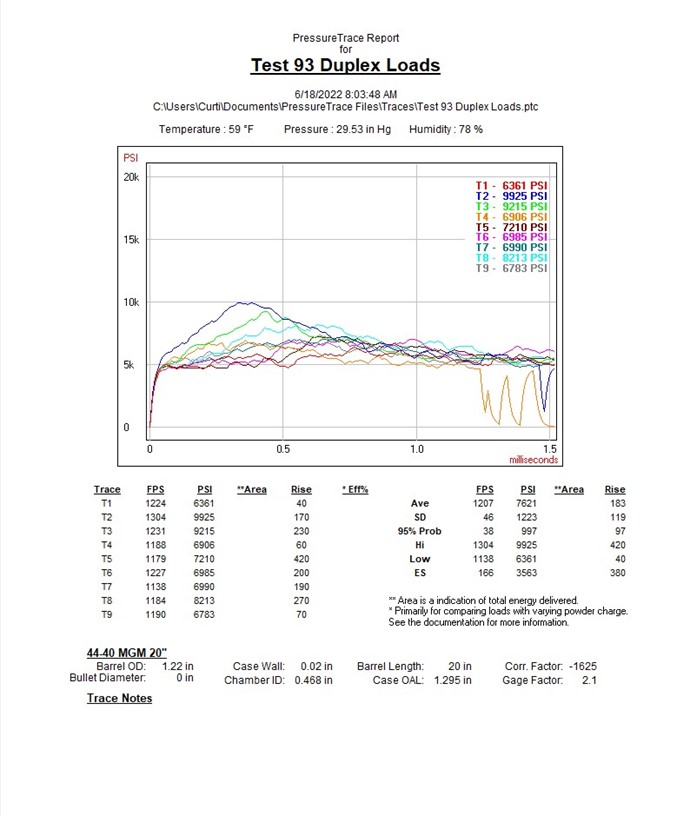 For those that are somewhat keeping up with the progress, I have updated the Pressure Testing page of the 44-40 website to include a large selection of test charts to review.

Also, Sharpshooter leaves behind some "burnt" skeletons. Also appears to be a few unburnt disk powder there too. 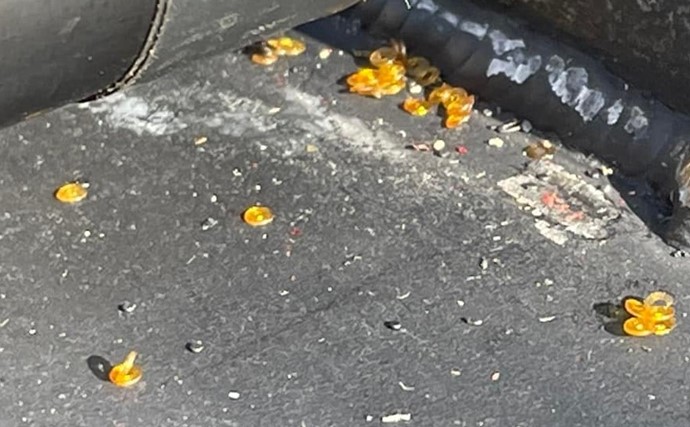 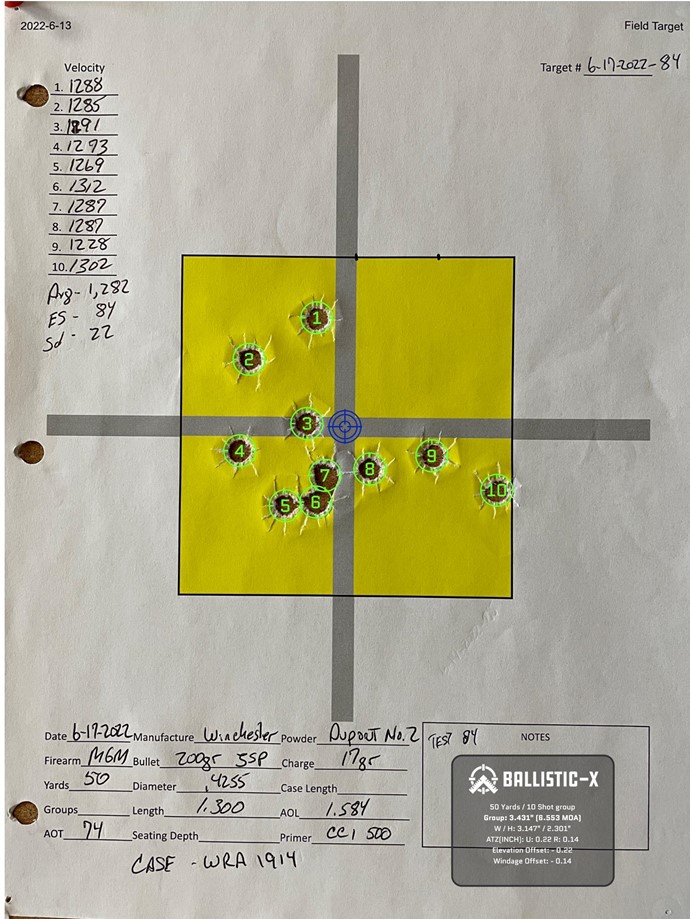