My neighbor found I like old lever actions and asked me if I would look at a collection of parts he couldn't reassemble--and old deer rifle, he said.  This must be and old '94, I figured and asked him to bring it over.  He showed up with a barreled action and a cardboard box with parts.  I looked closer and it was a Winchester mod 1886, round barrel rifle in 40-65.

There were a few parts missing or broken, and the bore looked like a sewer pipe.  The receiver was deeply scratched as if someone had used no 60 sandpaper to remove rust.  The blueing was gone and only a few areas showed faint case color .  I told my friend I could reassemble the rifle, but he would have to buy some parts and I wouldn't shoot it with the barrel in such bad shape.  He offered to sell it and I soon was proud owner of the incomplete collection of makings for an antique rifle.

All of the markings were in suprisingly good shape and the only deep scratches were on the sides of the receiver.  I was afraid they were too deep to polish out, but I needed a gunsmith to tell me how to handle the problem.  My first thought was to rebarrel in 45-70 if the gunsmith said the receiver was salvageable.  I shipped the parts to Dennis Olson in Montana.  He told me he could file and polish out the deep scratches, reline the barrel in 40-65, replace the missing parts, then reblue and case harden like the original.  He did not recommend relining in 45-70 because the barrel might not be big enough in diameter to handle heavy loads after being drilled out for a 45-70 liner.

I wanted to be able to use heavier bullets--at least 350 gr.  Mr. Olson could not tell me how much longer than  265 gr a bullet could be and function through the action of my mod .86. I doubted that heavier bullets would shoot well with a slow twist.  I decided to use a 1/18 twist, .408 dia. barrel and hope longer bullets would fit thru the action.  I have had fairly good results with a twist faster than the theoretic ideal (but very bad results with too slow twists), so I estimated that 1/18 would be a good compromise.   I sent Mr. Olson a couple of cases fired in my Sharps and asked for a chamber as close as possibly to it.  I figured that the mod .86 was chambered for longer cases than the 40-65 so probably longer bullets would fit through the action.

I learned years ago that no gunsmith ever got a project done in less than twice the time he promised the customer,  so it didn't surprise me that this took a while.  The wait was well worth it.  I don't know what a mod .86 looked like new, but my old junker looked brand new to me.  The deep scratches on the side of the receiver were completely gone.  All of the lettering and numbers were sharp, with no edges polished off, and the color case was beautiful.  The gunsmith found a new magazine tube and a few other parts.  I cannot see evidence of the relining.  I was able to refinish the stock so the rifle now is the best looking lever gun I own.

I was pleasently surprised when I found the action takes rounds loaded with up to 400gr. flat point bullets so long as they are seated to the crimp grove.  I can even shoot money bullets loaded for the sharps if I load them single shot.

Given that 40-65 can (I have read, have not done it) be formed from 45-70 brass, I think it's a good choice, at least maintaining the original caliber associated with the serial # of the rifle.  You would think that people would be smart enough not to put modern "hot" 45-70 loads into an old '86 rifle, but, no, there are plenty of people out there who are dumb enough to do just that.

If cases fired in your Sharps can be neck-sized and fit the 86, and vice-versa, that was a really good job of chambering that new barrel liner on the part of your smith.  You might want to segregate cases for each rifle anyway, if you ever want to hunt with this 86, you would be just daring "Murphy" to provide a round that sticks as you chamber it if you mix them up.

I have a very nice 45-70 1886, a lightweight takedown model, deluxe gun, fancy stock with "shotgun" butt plate, and a set trigger that is the only 86 with a set trigger I have personally seen (but I don't get out much).  Lord knows it's possible to chamber the 550 grain hot loads offered, at least these are a cast bullet, but, assuming the gun held together with such loads, it would just abut kick your teeth out (remember the part about being a "special lightweight rifle"?)  It is nice to be able to get brass at discount stores rather than have to mail-order it, and every loading manual I have anyway has loads for 45-70 in it.

Given that I have an original trap door as well as the 86, and that the 86 is OK with somewhat hotter loads than the trap door, I always use a permanent magic marker to color the bullet tips black on loads intended for my 86.  Just one way of trying to keep myself out of trouble.  Unfortunately the trap door has a much larger chamber than the 86, so just neck sizing won't keep rounds intended for the 86 out of the trap door.

Boys, I have a few decent pics of the old mod. 86, and they are uploaded into the computer.  I have spent the past 3 hours trying to post these, going to the photo icon above the "edit" box.  I have read all the faq posts.  I cannot find the pics when I click on the icon.  This is a PIA!

Mitch, I have an H&R officers model and a C. Sharps hunter rifle in 45-70.  I have read the sharps will handle loads recommended for  a ruger no 1, but my days of hot loads are past--I use black powder and have no need for anything any hotter.

Many years ago I decided I wanted a 45-70.  Ruger made a 6 lb rifle, the no. 3, In 45-70.  A fellow named Ron Kiser was an expert shooter, collector, and caster.  He gave me a copy of an article published in the "Handloader" written by Ken Waters testing every 45-70 available at that time.  Waters divided The rifles into 3 strength categories as Lyman did In the next Black Powder Guide--trapdoors were the weakest, mod. '86's in the next level, and only the Ruger no.1, no. 3, and a converted Siamese Mauser in the strongest.  I told Ron I was going to load some 405 gr bullets up to the hottest Waters had tested.  If the no. 1 was strong enough, the no. 3 ought to hold the same loads, since the actions were essentially the same.  Ron warned me that I might find these loads uncomfortably in the little carbine.

But I was determined to shoot the tank-buster load.  My only centerfires at that point were a 22-250 and a 30-30 Winchester, and  was as tough as any shooter I knew...…

Fortunately, I decided to take my first shot offhand at 50 yards.  I used a large muzzle loader buffalo target.  The barrel was almost vertical after the first shot, and there was no hole on the paper.  My shoulder was starting to turn blue, and I had a headache.   I was able to get off a couple more shots.  but never did find a hole in the paper.  Later Ron explained to me that recoil was pushing the barrel up before the bullet left the barrel. With a very high front sight and the rear down as low as it would go the rounds were going over the paper. later I found Trapdoor loads more than I wanted to shoot in the no.3.

I owned a Browning '86 in 45-70,  and another Shiloh but I sold those as well as the Ruger.  As I got older I found that the Shiloh with a 32" heavy barrel was the only one comfortable with heavy loads.

Dennis Olsen did a wonderful job with my '86.  I shot it and my Shiloh last weekend and cleaned up and buffed the cases.  I neck sized and expanded the cases and they drop right in to both chambers as easily as if they all had been fire in the same gun.

Standard Member
oscarflytyer posted this 31 May 2018

THAT is AWESOME!  I saw my first ever 40-82 Winchester at the gun show last weekend.

Curious - after all said and done, what do you have in it?  Thanx 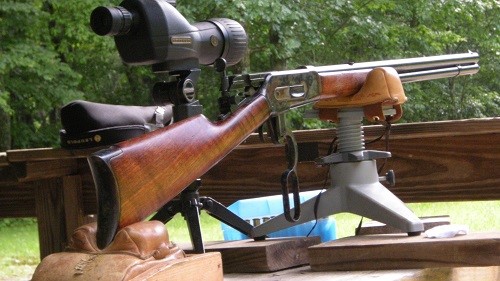 Try that gat from offhand, it seems to me the stock is made more for offhand than for bench rest shooting. That really is a beautiful restoration!