Although this was not the first match my son Thomas (junior member) and I shot in this year this one I have pictures from. The weather forecast for Spokane that day was rain and strong gusty winds. Lucky for us the weather man missed the mark and we had rain showers but nearly no wind. However that didn't seem to help much as most shooters were not shooting to potential. At Spokane Rifle Club (SRC) we only shoot at 100 yards. This year the course fo fire is 5 shot groups, 10 shot groups and then a score match. At the same time is a military rifle match, this time there was only one competitor for military. 7 shooters participated.I think it is fair to say a good time was had by all.

This match was special with the 3rd generation of Stripes' would shoot at SRC, my Dad's home range. Don Barron thought that was pretty cool. He said that on the same day he received the latest issue of The Fouling Shot he was reading an article written by my Dad in an old issue. He then opened the new issue and saw an article written by me.

As the match progressed the weather kept changing from not raining to rain to downpour to drizzle. It seemed to be having an effect on all shooters and our groups and scores. I had an unusual number of fliers although I'm not going to blame the rain. Too many other factors at play to reach a conclusion on the cause. I am baffled though by fliers that fall below the aimpoint by a couple of inches. I'm just not sure how that can happen with a well supported rifle.

Rich McClure and Ray Schueler took best score and group of the day but I do not recall who shot which. Production class and Hunter class were both well represented. Military and Heavy each just one shooter. 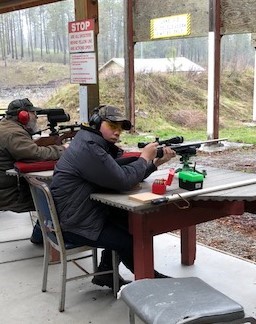 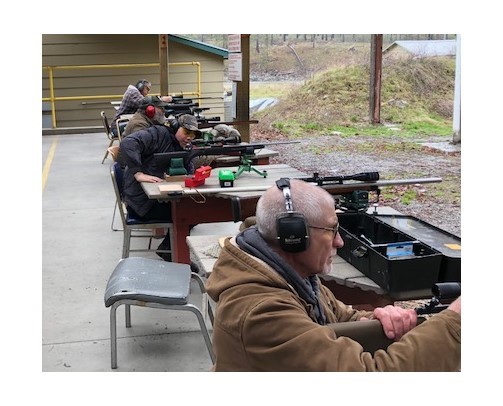 Second picture shows part of the firing line missing one shooter, not including Ray or myself.

Consistent neck tension helps also. Recent Fouling Shot article tells of a man that uses just one case during match and reloads in between each shot. I am almost sure case neck is turned for zero neck clearance or snug slip fit inside chamber. Bullet can be reseated using Wilson inline seater without any case resizing.

Good pictures.  That firing line looks very well set up.  You must have an active and supportive club there.

Consistent neck tension helps also. Recent Fouling Shot article tells of a man that uses just one case during match and reloads in between each shot. I am almost sure case neck is turned for zero neck clearance or snug slip fit inside chamber. Bullet can be reseated using Wilson inline seater without any case resizing.

It is interesting that you bring this up. On a much colder day in January I shot my best group yet, 10 shots 100 yards .611 inches. Same lot powder, same lot primers same bullet? Many of those records that Mike shot at Kenmore I was sitting right next to him as he was doing it. He believes that neck tension alone is the winning solution. My .30BR the bullets are seated by hand. If the tong tool I use to decap sizes at all it is very slight, less than I am able to measure anyway. One possibility is I have not had time lately to weigh bullets, scores are down, cause and effect? Not enough data points to make a call.

I do appreciate input on possible causes of the fliers and neck tension might in fact be the issue. I could have a few bad bullets too. My lube might not be the best one for the weather and temperature or velocity. There could also have been a slight breeze during the shots that landed outside of the group. Needless to say for me trying to shoot cast bullets into tiny groups is a humbling hobby.

Thanks Urny. The CBA has been well represented in the club's board over the years. I'm not sure about currently though. I'm a bit out of touch with the club these days since I'm not a member and live 190 miles away.

I wonder if age hardening of bullets has any effect. Would it be best to cast one big lot of 100 bullets to let hardness stabilize before testing. Some say bumping the bullet will also reduce hardness temporarily.

It was, indeed, cool. One would have to look hard to find 3 gens of cb shooters participating in matches. Who's the old guy with the grey hair in the foreground? I suspect the weather was a factor, at least in the generally low scores.  It was RAINING.  Targets had to be very carefully handled and retrieved post haste.  Great fun all the same.