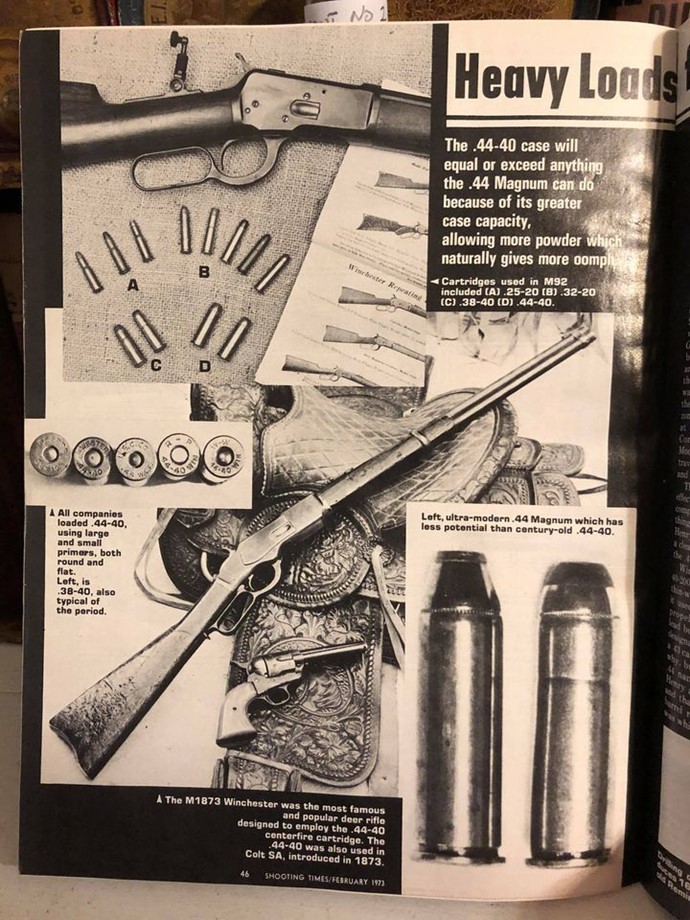 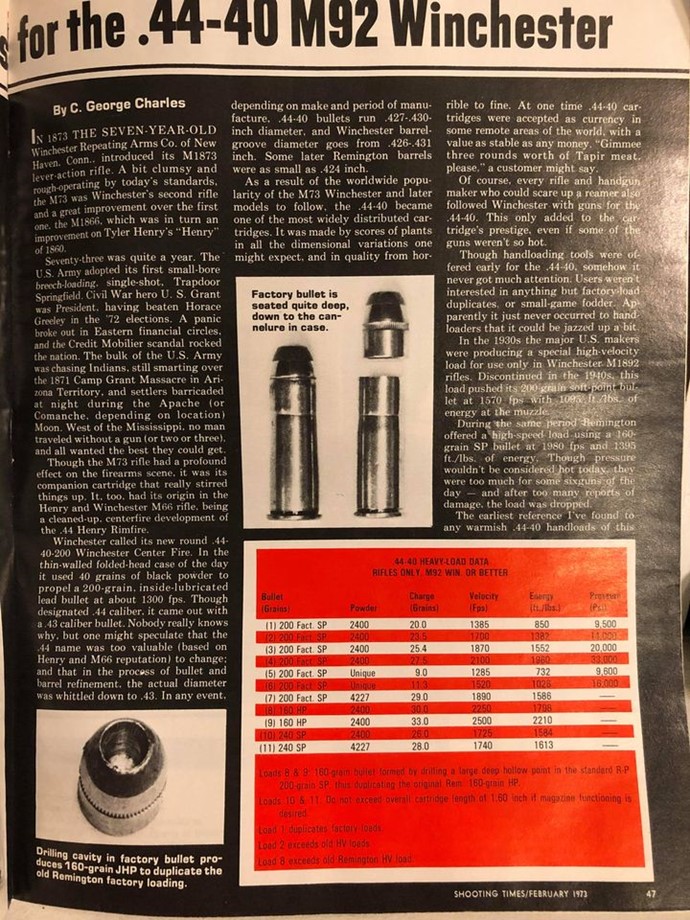 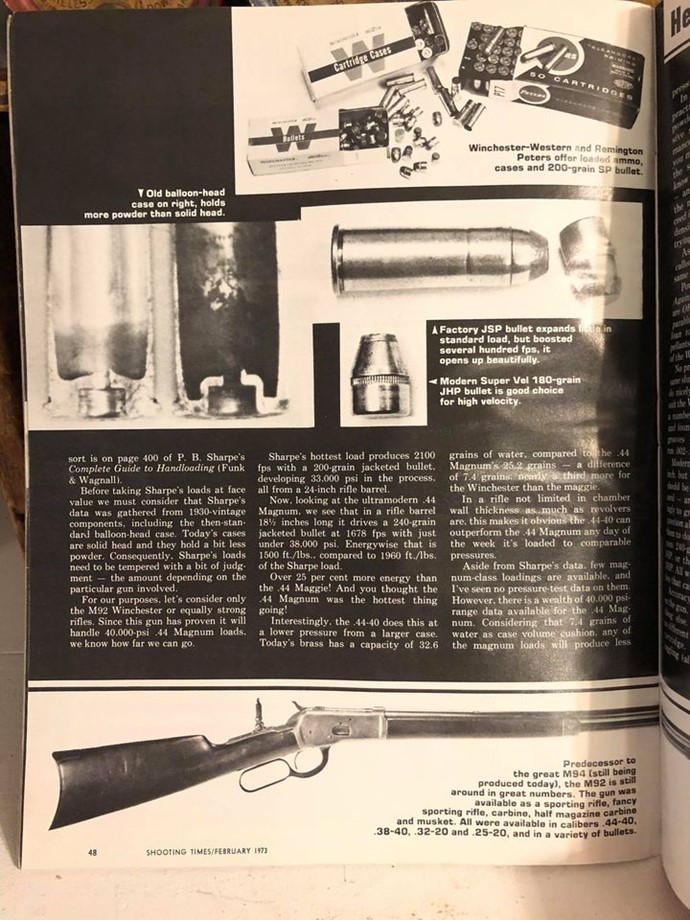 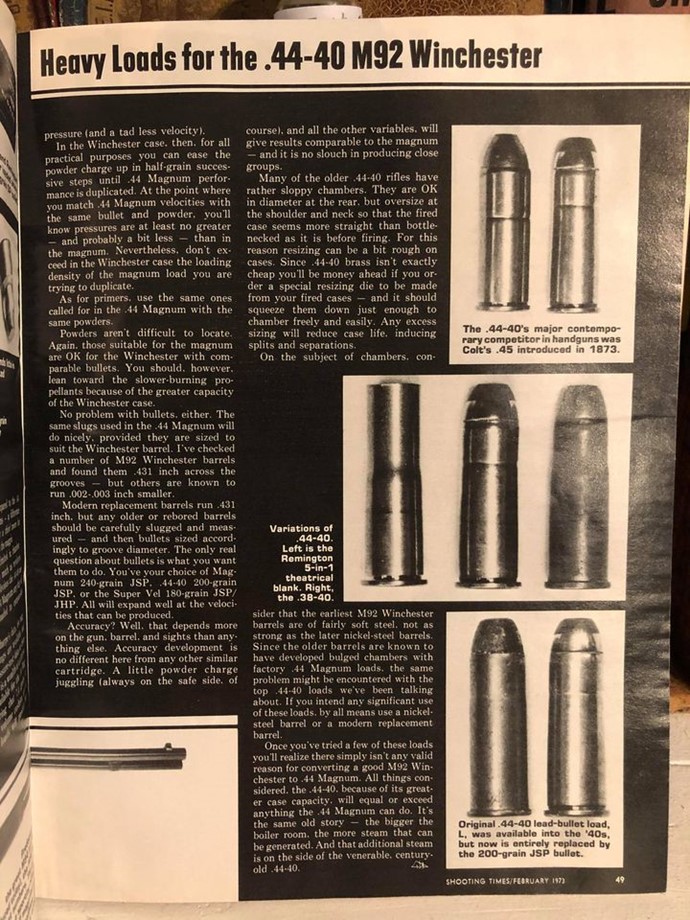 I got past the case head problem with such loads in my Chiappa Cimmaron M92 44-40 by simply NSing the fired cases by running the necks only up into a 44 SPL/Magnum carbide sizer.  I only loaded such heavy 44 Magnum level loads for the knowledge as they seize up the action of my old model Vaquero due to set back of the tapered case in the chambers.

From back in the Day when Shooting Times was worth reading.

I have a 44 Mag resize die cut down to only resize the neck.

Savvyjack thanks for posting the article, good read.  The reference to Philip Sharpe's book reminded me to go look for my copy.  I haven't looked at it in probably 40 years, kinda forgot it was on the shelf.  Good reference for the 44-40 and quite a few other cartridges to use for reference with others like the older Lyman books and others.

Now I have to check my old Winchester 92 to see if it's nickel steel or not.  Would have to keep loads well separated from loads for my Colt Lighting pump.

Thanks for the time and effort to post your Winchester 92 article. I enjoyed it. I have a 92 converted to .357 and one converted to .44 Mag.( re-barreled of course) Keep up the good work please.

Having been there, done that, I warn anyone going to the really hot loads

that you are risking case head separations with the relatively weak 44-40 brass..

Some M92s will have enough excess head space...

Including a really nice SRC I had back then which had a New Factory Win.Barrel on it.

But it had escess headspace. First loading  in new WW brass looked OK, but then I got

I killed my second last deer with that load in the 1st year production M92 I have now..

One shot thru heart  one kill at 65 yds . The buck went about 70yards, and collapsed dead

I do know Winchester advised not to reload their HV factory, loads but that was pre- WWII using semi-balloonhead brass. I am not surprised similar issues may be encountered with WW brass. Using such loads in the Marlin 1894CB, I do get case stretch and have to trim after several fired re-loads, however, I am using the stronger Starline brass. I was able to purchase a batch that was 1.300" and they have stretched as much as 1.310" before I sized back to 1.300". There is certainly some thinning going on in there but I have yet to cut one open to check. Fired HV loads from the Marlin will not chamber in my revolversor my Marlin 1889, so the chamber is a tad oversized at the base.

No issues yet with separations but I am keeping an eye on it. It did catch my attention when he mentions getting customs die made for such chambers.

I can relate also to the Modern production Marlin 1894 rifles.

would end up with head separations.

Oh, BTW, you can check your brass for incipient separation near the case head by "hooking" them

with a paper clip opened up and with a small bend/hook on the end.

https://sites.google.com/view/44winc...y-at-200-yardsDid this 200 yard target this morning with normal Winchester 73' loads. 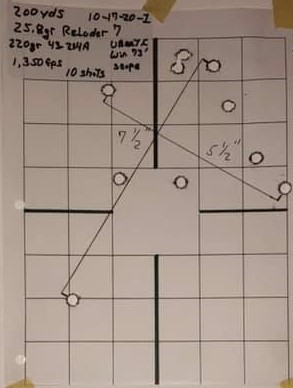 Which one is the 44 Magnum case? 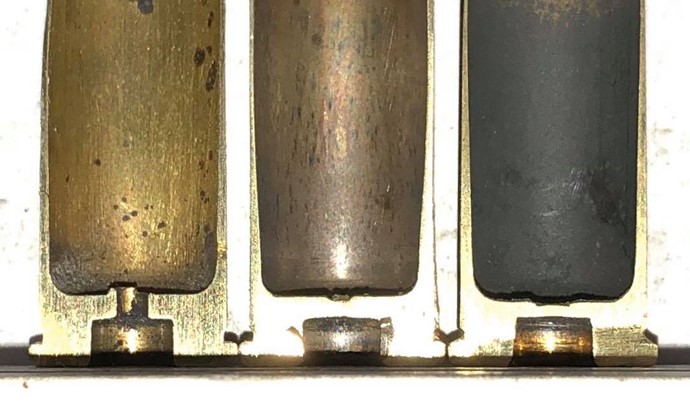