Coyote or other critter shoot this winter?

I'd be in ,just got my 358 win barrel in and put on my savage ,she needs to get a confirmed kill

I'm out.  In three weeks I'll only have one usable arm.  (elective surgery)

IN for groundhog, bunny, whatever shoot.

Just do have a couple of coyote targets left over from last year....

I'd be a starter.  I really enjoyed the bunny shoot as it gave me a reason to get out the range and practice and actually have some 'me' time.

I'd be in. The bunny shoot was a lot of fun!

Count me in I will behave this time.

I am reloading 75 rounds of 30-30 ammo in anticipation. I should be able to hit a wabbit with that many shots, shouldn't I?

This one is new to me. What is a coyote groundhog bunny shoot?  Must be something fun.

Take a look on the right to the "Postal Match Cast Bullet Shooting" subject.

You will be able to review past fun matches shooting at Coyotes, Bunnys, and Groundhogs

over the last several years.

Lots of pictures of shot targets,etc

I am reloading 75 rounds of 30-30 ammo in anticipation. I should be able to hit a wabbit with that many shots, shouldn't I?

Glad you are feeling confident

Is anyone actually putting this together yet?

I only asked a question whether a fun Postal match would be run again .

Looks like you you have just nominated yourself beltfed.

I would not know the first thing about arranging the shoot.

But I would consent to do something like scoring targets.

I just had a thought. What if we had printable targets on this website?  Then we could print them, shoot them, score them, post our results - and be happy or sad - depending on how well we shot? 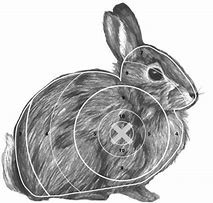 In 2018 and early 2019, Jim Scearcy organized these animal Postal events. He lost his wife to cancer kast spring. I'm guessing he is stepping aside from shooting for the time being. Ken Campbell was Jim's partner in crime for these fun events.

Maybe someone else wants to jump in and organize a new series of shoots?

One challenge is targets. Once one is determined, the shooters buy their own packets of targets and the shot them, etc. One catch is you buy a packet of (25) or (50) but only need a couple, so what do to do with the rest? Several shooters living near each other could share a packet.

Jim was a big proponent in keeping the equipment and shooting positions simple. This was a karge contributor to the sucess of the events.

Thank you, Tom for letting us know about Jim . I pray for his comfort in his loss.

and understand his need for stepping back for a while..

I know the animal targets are kind of fun, but, how about using "std" bullseye targets as used in the

regular CBA competition. SR-31s and SR-52s for Vin Mil Class,  others appropriate for other classes.

An easy one would be to just shoot for groups on any target, like on the Shiloh Site Frostbite 200 postal match.

A part of the appeal was the name of the match...Bunny, Groundhog and Coyote. The shooting distances were short for some of the animals. But using known traditional bullseye targets and focusing on group size could be a viable alternative.

The Postal efforts are and have been an "honor system". So shooters fire the 10-rounds and measure their groups, include their load and rifle data and post the info, including the target photo here. Not having to mail in targets for scoring is a key to keeping this simple.

Jim didn't have a military rifle event, he just let the shooter shoot whatever he wanted. Too mnay rules! The only distinquisher was iron or scoped sights.

As you can see on the Shiloh forum, the banter between shooters takes more column space than the shooting details. To me that element makes it a fun and interesting endeavor.

I encourage those on this website who want to fire up a spring postal here to go take a look at the Shiloh Rifle Forum, Shooter to Shooter, 200-yard Frostbite Postal. One of the shooters keeps the score listings current and helps post photos, etc.

Ok, I surrender.  2020 Groundhog Shoot thread posted for signups.  If I missed anything, let me know.