Ok,my plan,good lord willing is to hunt with my 686 revolver 6 inch,or my Rossi 92,in 367 cal. Plan to use 158 gr swc with gas check. My question to you more experience hunters is what hardness do you recommend for me. Thank you all. Johnny..ps..white tale deer mainly unless I see a rhino. Distance o to 50 yards in the woods..

Might want to specify what game you are hunting, typical shot distance and the critter size....

Here, we are overrun with wild pigs and most aren't too large.  Often shots are at 15-30 yards, although farther is possible.

Our whitetail deer don't run too large, either.  On the other hand, deer elsewhere can grow to be pretty big.  Needless to say,

shot placement will be critical, and considering the angle on your target -- and the amount of meat, bone, etc. involved in your

shot angle -- will be very important as you don't have a lot of extra wiggle room, caliber-wise.

Put your not saying anything about alloy hardness. That's my question. Thanks

For handgun hunting you don't need or necessarily want a hard alloy. In the .357 Magnum with a gaschecked bullet an alloy similar to 1:20 tin-lead or 50-50 wheeleeights and plumber's lead with 1-2% tin added works well. Solid flatnosed bullets having a meplat about 0.7 of the bullet diameter will rivet. Hollowpoints will expand well and retain most of their weight if cavity geometry is correct for the expected velocity. At handgun velocities below 1300 fps a cup point with diameter 0.6 of the meplat diameter with a 60 degree draft angle, producing a shallow conical cavity no deeper than its diameter will enable expansion with excellent weight retention, providing deep penetration without fragmenting.

Most of my serious .357 mag handgun hunting took place in the 70's & 80's using a 6" Dan Wesson .357 mag in the woods of East Texas. Game consisted of mainly deer, rabbits and squirrels. I used the same bullet for all, a Lee 158 gr. SWC using wheel weights sweetened with some pure lead, can't remember how much but they were pretty soft. My goal was pure bullet performance, not worrying about leading during accuracy testing. That revolver still takes very few shots to determine a good accurate load.

Of course bullet placement for each animal was different. But for the deer I had a second mold of the same style, but a hollow-point design. I can't remember the exact load I used for deer, but I do remember it was SR-4756 that was used to fuel them and that they were about 1200 fps. As I recall there were 5-6 deer taken with the load and that it performed well at the usual distance of about 35-40 yards. I only remember one kill in detail because the bullet exited a small doe and the amount of blood and hair on the pine needles where she had stood. She ran about 50 yards before piling up in some brush. The bullet had penetrated both lungs.

Appreciate the reply. Still a few months left before the season. But I want to get everything set for my adventure. At 73 I have to get ready.. lol thanks again.

A 158 SWC like Lyman 358156 is excellent. I would use it as-is, in soft alloy it will rivet in the pistol and expand nicely in your rifle.

A deep hollow point will expand too much and limit penetration. I have tried a shallow cup point as described by Ed Harris and this gave ideal expansion. Instead of ordering a mold, I chucked the bullets in a lathe and used a reamer to cut the cup point. This provided the few cup points I needed for hunting at minimal expense. .

Appreciate the replies. After reading alot about the hollow point cast bullets,I have pretty much decided against them. I don't want to buy another mold anyway. Thanks

I have taken many whitetail with the 158gr KTSWC bullets in Lyman #2 alloy in Virginia and North Carolina. Darh good bullet in both the 686 and the Rossi M92. 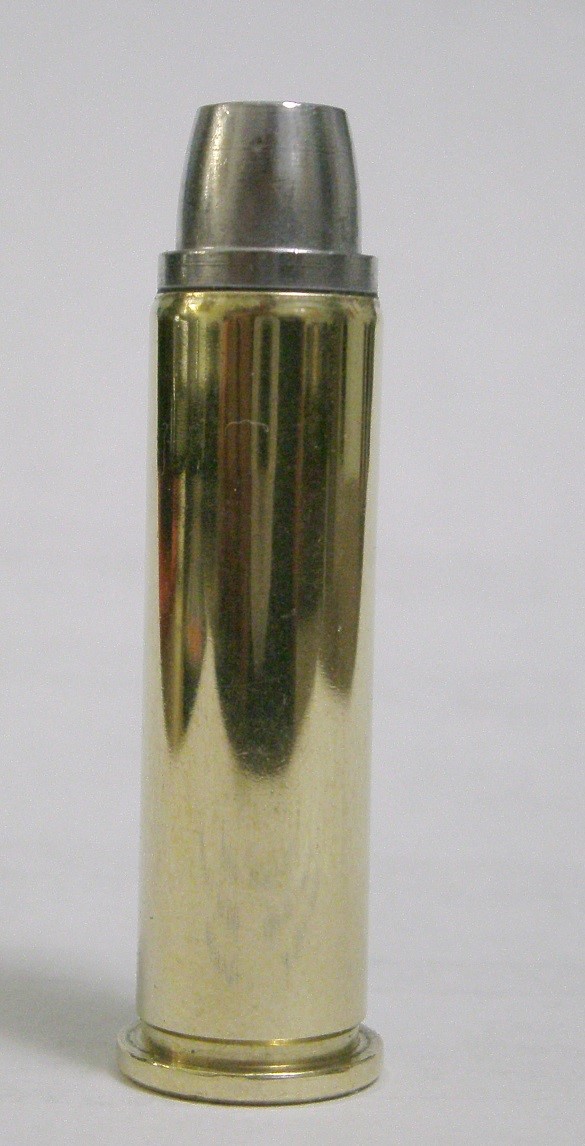 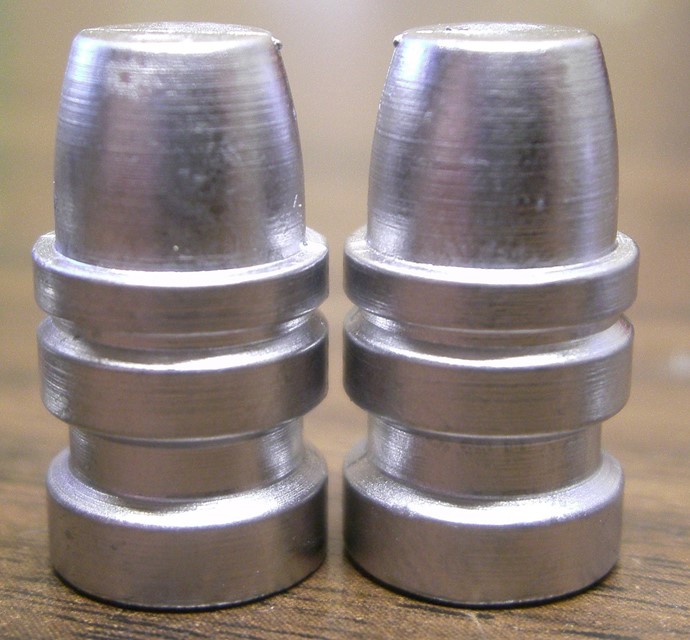 Use a No.2 center drill in the drill press to machine a cup point similar in profile to the .38 Spl. Winchester X38SPD service load and it will do well!

For both revolvers, iron sights only were used. Muzzle velocities ranged between 1050 and 1150 fps. The S&W took (5) Mule deer and the Dan Wesson took (13) Mule Deer and (2) Minnesota Whitetails. Entry and exit wound holes were usually the same size. Alloy was wheel weights. The largest Mule deer was a 5x5 (western count), weighing 210-pounds field dressed, with the S&W, in 1986. Some years we didn’t succeed in the license lottery and other years we hunted but got skunked. In 1977 the non resident license was $50. Today it is $385…..for a deer!

Early on, the Wyo Game & Fish Dept had a handgun hunting requirement. The round had to have 500-foot pounds of remaining energy @ 100-yards. There was no .357 Mag load (@ the time) that had a factory loading that satisfied that. It would have been interesting to try to convince a game warden that your handload qualifies. But then in all those years I never ran into a game warden. But the rule did make some sense. The department was trying to reduce the wounding of animals. Some hunters, when in those vast, wide open spaces, take long shots that they shouldn’t.

My closest shot was about 4-feet. I saw the deer (binoculars) sunning himself in a draw. Using the wind and terrain, I got within 50-yards of him. I dropped my holster belt, canteen, binoculars (possible noise makers) and took 20-minutes to close the distance. I was slightly above him. His peripheral vision saw me just as I appeared over edge of the cut in the draw. Shot him in the base of the skull as he started to stand up.

That was the most rewarding and memorable stalk in all those years. The terrain is composed of either wide open areas with flat top buttes covered with sage brush and buffalo grass OR Ponderosa pines (similar to the Black Hills) on hills, with deep draws filled with knee deep pine needles. And the even better part….a lot of places you can see no evidence of man except for an occasional section of barbed wire fencing.

In 1981 I took off of hunting and walked the fence line. On a plan view map, it scaled about 5-miles. But with all of the ups and downs I bet it was closer to 15-miles. It took me all day. The elevation is about 5,500-feet. Always takes me two days to adjust. My experience with the Boy Scout hiking merit badge years before came in helpful that day.

CBA Member
giorgio the slim one posted this 3 weeks ago

I am an old fart  now ,long time ago and used to hunt boars driven by hounds , I was never a good stalker as Tom . I prefer only calibers  with their  number beginning with 4 .

I do not despise 357  cal leverguns , I have two  a Chiappa firearms  and a Marlin, and years ago a Rossi from Brazil , nice and wonderful  for fun shooting  but too light for game shooting ,in my  old fart  cholesterol stuffed  brains .   My 357 lever action carbines ,all  of them   for smooth feeding  ,prefer 38 special  brass .

I am building a 9.3x62 on a 98 action.  Working on the bolt right now and plan on sending it off to ER Shaw shortly.  Does anyone have a load for NOE 285 grain bullet?