I just had my first experience casting with a brass mold. It was casting perfect bullets after the second pour and the bullets dropped free just by opening the mold most of the time. The ones that didn't only needed a gentle tap on the handle to drop. My days is based on a sample of one, but it seems brass may be the best performing mold metal (I'm sure it's expensive though)!

What are your experiences with brass molds? What is your favorite mold material?

I have several brass molds and appreciate their precision especially for larger bullets in the 400+ grain category. They retain heat better allowing for better fill-out. They are however - HEAVY.

I prefer aluminum and the longer sessions they allow due to their light weight. A faster cadence is necessary with them to keep them filling out properly.

I like brass but, good aluminum is more durable and lighter.

Brass makes beautiful bullets and very close in weight. Single cavity is not too heavy even for a old man like me. Aluminum depends upon what alloy it is made from, some will not last 500 bullets and some good for a normal lifetime, i.e. 50,000. It is winter time now in the shop and if I can make 100 really good bullets in an afternoon, listening to Wagner, I am happy.

I agree with the positive comments on brass molds above.  I have a bunch of them.  However I stopped buying them in mold blocks with more than 3 cavities.  They just get too heavy after a time for me, especially after emptying a 20lb pot a few times.

And Ric I am glad that you mentioned listening to Wagner.  Now I don't feel so weird about my musical tendencies in casting operations.

I And Ric I am glad that you mentioned listening to Wagner.  Now I don't feel so weird about my musical tendencies in casting operations.

Gentlemen. It is scientifically proven, and 9 out of 10 bullet casters agree, that listening to Led Zeppelin produces more uniform bullets.

I have bought two of the MP HP molds in the past month, one a .312" 150 gr. Hunter four cavity and the other a 9 mm 125 gr. that cast round or penta HP bullets or FN bullets in a four cavity as well.  I have other pistol HP molds by several makers, but I can say that as far as casting HP bullets in multiples at once, you can't beat the MP molds.  They are heavier, but I'll take that for the easy of casting HP bullets.

I make up for the heavier brass mold by using a cheap lab jack to rest my mold on while pouring and rest the mold handles on the side of my sprue box while it's cools before cutting, that way I don't have to hold the added weight very much.  You can get this lab jack off Amazon for about $8, this is one a friend of mine has and mine is the same jack. 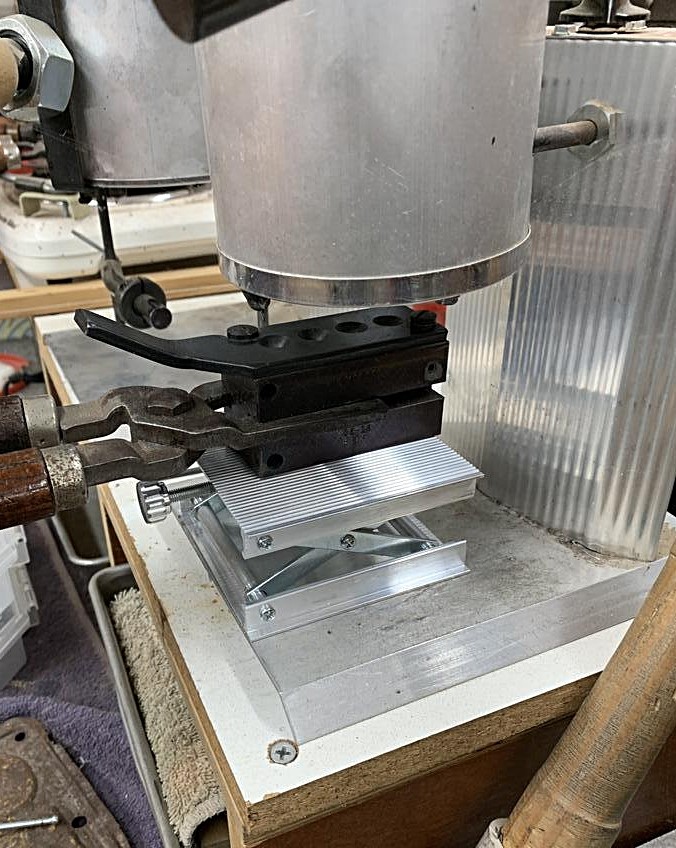 Many of you have pointed out the weight of brass mold as a negative attribute. The only brass molds I have used are single cavity, so weight wasn't a big factor. I have used some four cavity iron molds, and those things are monsters! I don't do high volume casting, so one and two cavity molds are what I use. If your using a mold with more than two cavities I can see that aluminum has definite advantages.

Aluminum moulds gald easily (steel sprue plate rubbing against aluminum) and must be lubed often. I do not remember brass moulds ever having this problem?

I have one brass mould made by Mr. Eagan. Of course it works perfectly even when I listen to old hard-core punk rock. Listen carefully and you can hear him spinning.

I had two Eagan molds, they were single cavity and worked great! I remember Tom gray suggesting to me to try an Eagan mold. I did and afterwards he said….”if you like that mold you might want to buy another one soon, no telling how long Don will be making them”. It was good advice. I also had an NOE 4-cavity 6.5mm brass mold that too worked good @ the casting bench.

Speaking of music….I have (23) albums by John Leslie Montgomery. Now to drag out the turntable, amp and speaker so I can start listening to him again while casting. I attended a local concert by him in 1966. I was also fortunate enough to attend another local concert by Johnny Smith, 2-years later.

That reminded me my first brass mold was from Old West.  A 4 cavity full wadcutter .44 caliber.  Great mold, and sent me down the brass rabbit hole.

And I second the jack as a mold guide, and with a brass mold too. 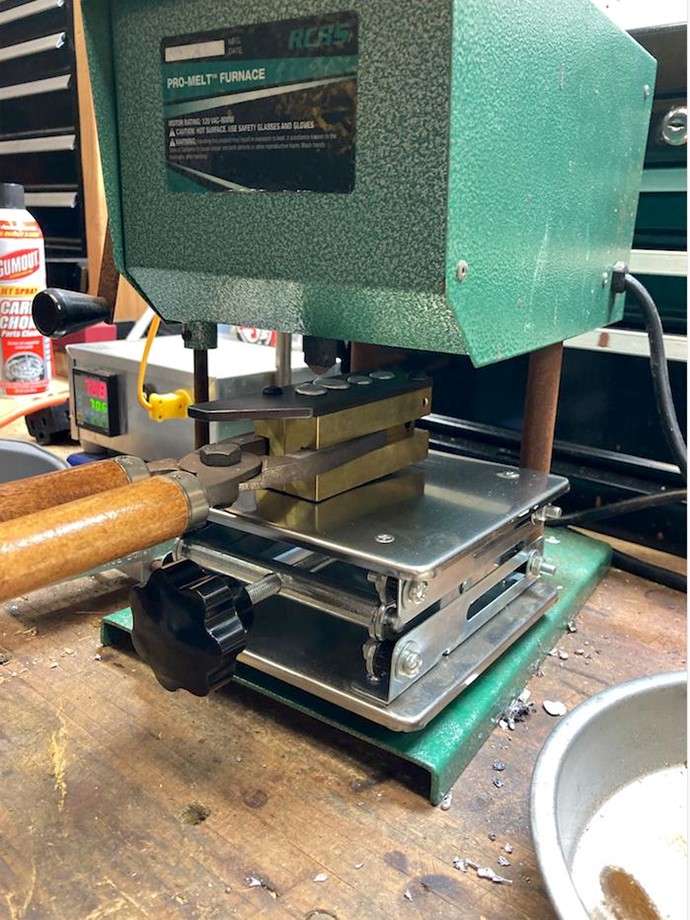 .  The problem is that it is a 4 cavity.  It is exhausting to empty a 20# pot, especially since my guide rods and the changeable pins are not presently compatible, i.e., I canNOT rest the mould on them and the more tired I get the more often I splash molten lead over the side of the mould and make a mess of those pins.  Changing the height of the rods will require some effort.  I have carelessly managed to allow molten lead to fill the allen screws and threads the lock in adjustment.

I have a few brass CBE moulds from Australia and they are fantastic.  Cast well, had the heat.

I couldn't handle the weight of the 6 cavity MP pin type brass molds so I did some some modifications on the Mag 20 I was using.  The Lyman guides only fit NOE and Lyman molds if I remember correctly.

I got one of those open faced NOE Third Teneration Mold Guides and modified it by drilling, tapping and set screwing it to the front guide bolt to keep it from moving laterally.  Then I machined off the left side guide fence so the pins would clear the left side.

Also put a hole in the guide under the spout so any drips would go directly to a discard pan under the guide. I flipped the tray under the guide upside down to allow use of the NOE guide.  My hands appreciated it. Thanks, Bill. 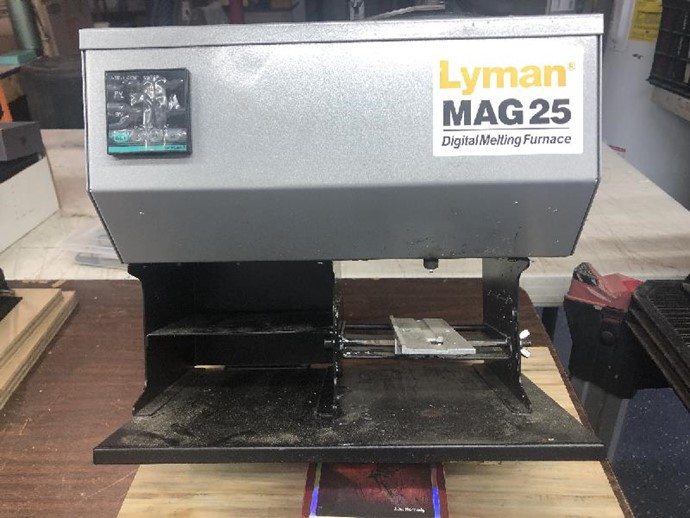 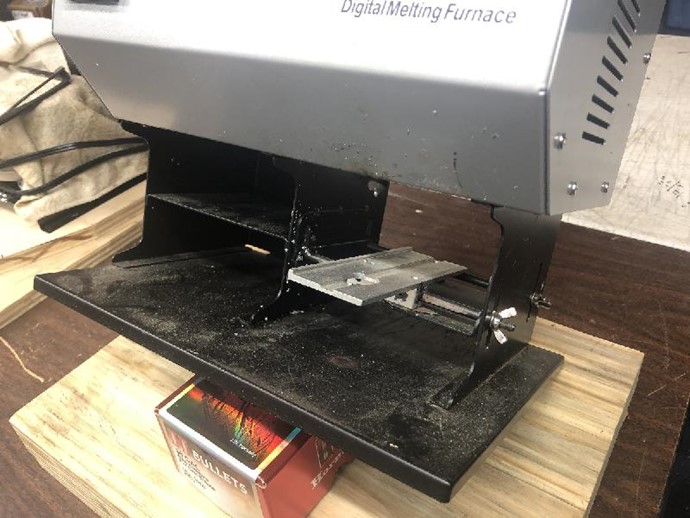 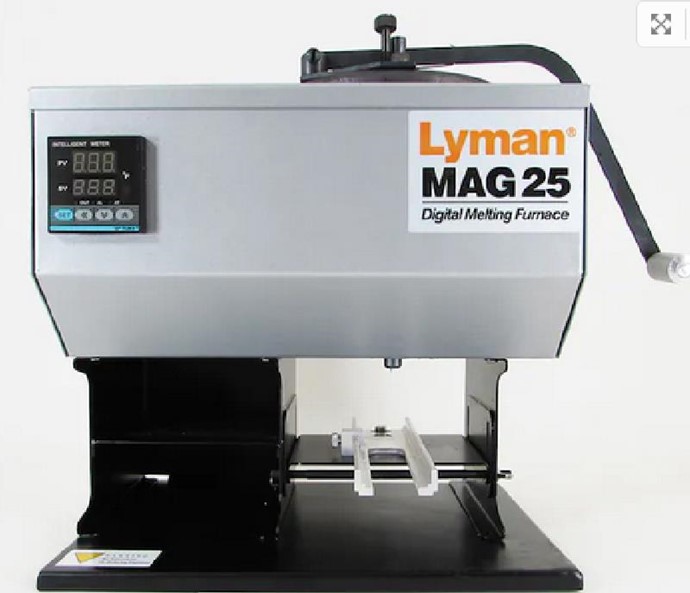 I love my brass mold from MP but with the pain in my wrists and elbows I have learned a new appreciation for the little Lee double cavity molds.

I have many brass molds by MP Molds. They are a work of art. Brass has been the best material I've ever used in 50+ years of casting. The bullets just never stick in the cavities. I also have aluminum molds which are great to cast with also, but they do have stuck bullets every once in a while. I find that bullets sticking in the cavity tend to be caused by to cold of a bullet upon ejection time. I cast with two molds simultaneously setting one down on a hot plate while I fill the other.

We don't live very far apart, I'm in Pocatello. You're welcome to come by and try casting with a brass mold before buying one. Don't worry about weight. When you see how well they cast you'll overlook the weight factor. You're young anyways and therefore "strong". I'm 70 and can still handle the old H&G 10 cavity molds.

Have you been casting long?

Jeff, I've been casting for about ten years. My only brass mold is a single cavity 32 caliber 100 grain wadcutter that I recently got from my grandfather. He is well into his 90s now and no longer casts or shoots. The mold does cast like a dream! My heaviest molds are a couple of old Lyman iron 4 cavity 44 and 357 molds that saw a long rough life before I ever got them. The biggest reason I don't use them much is that the bullets are much more prone to stick in the cavities, most likely due to some small pitting. The bullets shot great, but are too much hassle to cast! If I had a four cavity brass mold that made bullets that shot as well I would use it all the time!

My experience with aluminum mold is mixed. The only aluminum molds I have used are Lee molds. Some work great with no sticking, others are almost as bad as the pitted Lymans! I haven't been able to figure out the difference between the good ones and the bad.

Some times a mold that sticks, especially one that sticks on the same side constantly, has a machining burr. That can be sanded with fine sand paper, just on the edges, and very lightly. Don't over do it or you will have bullets with wings.