I must have read fifty different authors and digested their loads.

My cap and ball revolver and my Baker don't need lube (I lube the Baker patches with bought stuff) My .45 long colt bullets get done in my Lyman lube-sizer. No chemistry or alchemy needed there.

First thoughts are that it looks very hard.

Now, which method to chose. In a pan - need to make a lube cutter (currently in the lathe under construction)

Make a box to keep the ammo in - made the box - ding! little light comes on, I could bottom fill the Minnie cavity and then dip. Which is what I did.

Now - Devon and Cornwall Police, kindly get your arses into gear and send me my certificate - I neeeeeeeeed to shoot my gun!

Still in the tray!

I really would like to read your comments I am a true black powder lube novice.

I would like to help you but am not sure what you are loading for or shooting?

Dur! I can hear you shouting "Run Forrest!"

With luck, after five weeks, my fire-arms certificate will come back so that I can actually take it out on to the range.

I have made note of starting loads, and plan to start with 70 gr. of Swiss No.2

I am lucky enough to have a  mobile home on Bisley Ranges and, being retired, time isn't an issue.

As I say, any corrections will be welcome.

Pan lubing should not require a cutter. I let the lube and bullets cool in small Teflon pan, remove cake from pan, then push bullets out from top.

He cleans his BPCR barrel with a 80/20 mix water, Ballistol.

I have been using 50/50 bee's wax and olive oil as a BP lube for years in BPCR's, BP revolvers and percussion rifles. Sometimes, I add a dollop of lanoline. Although, don't know if it is necessary except that it makes the lube stickier. Some believe that SPG is nothing more than an expensive lanoline lube anyway.   The softness of this lube can be adjusted easily for use in the above by adjusting the amount of Bee's wax, The hardest is for the BPCR.

When lubing bullets and wanting to find out if it is hard enough, just lube a bullet and let it lay out in the sun on a hot sunny day. If the lube melts, stiffen by adding more wax. Or soften with more olive oil.

Otherwise, my MO is identical to what OU812 wrote with the exception being that I use   a 50/50 mixture of Ballistol and 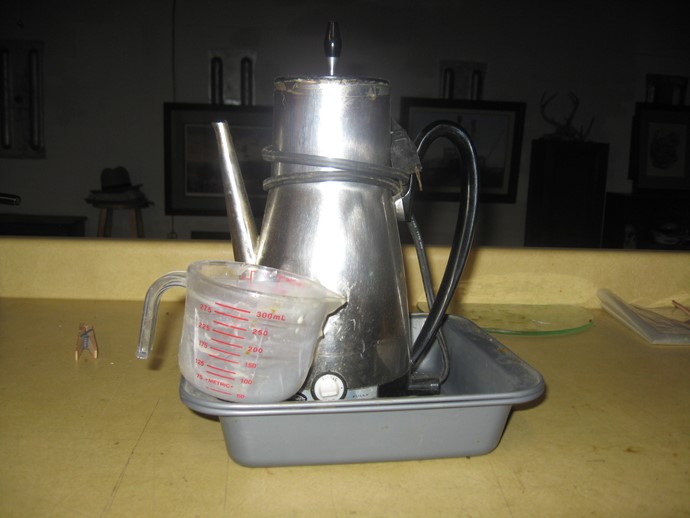 d water to clean and then pure to store. Checking the bore every day for three days there after.

Another 'Dur!' talk about over-engineering, making an unnecessary tool!

Of course - push them out!

More dripping in the next batch.

Thank you too, all useful.

Too hard confirmed, we are experiencing unusually hot days here in Devon and I had already thought about leaving the bullets in the sun. No melt.

Back to the drawing board.

Olive oil - I shall try that too and roast my potatoes in the rest of the dripping!

Bets wishes to you all

It helps to have a bee keeper across the street too.

I use straight SPG in my Whitworth .451.  NO leading, no problems, holds up fairly well in the heat.  Bullets kept in a speed loader in my shirt pocket while hunting give me no problems and shoot just as well as just lubed and taken to the range.

Like Old Coot, I too use straight SPG (in Trapdoor 45-70's).  What I have found is pushing bullets out too soon causes SPG to stick to my fingers and not stay real well in the grooves, and waiting too long causes the SPG to break out of the lube grooves when bullets are pushed out of the cake.  Timing isn't critical, but does play a slight factor.  I have found that bullets pushed out by hand when not too cold or hot retain the SPG very well for later loading.  For my pan lubing I use an old muffin tin, get 7 bullets per muffin, and the small cakes handle well.  If you pull one set out too early you know to leave the others a bit longer.  I may have to get an old tea pot or coffee pot like R. Dupraz for pouring, that would be nicer than gloves and warmed up canning jar pulled out of hot water.

After pushing bullets from cake I reinsert new bullets into empty holes then reheat @200-240 degrees in preheated oven. Heating bullets and lube together helps lube stick better. After cake cools ,you may have to put pan in freezer for about 1 hour to get lube cake to release from pan.

The beeswax and olive oil mix is hard to beat.  Adjust the ratio to the hardness you want, but 50-50 is a good starting point.

Neatsfoot oil can also be used, but I see no particular advantage.

I use ATF and beeswax for my smokeless loads, but if I used it with Holy Black I would be burned at the stake as a heretic.

Thanks Guys, all useful stuff. She Who Must Be Obeyed is out all day today

She has never, in forty years of buying and using 'gun-fun' stuff, complained; but using the olive oil, putting it with bees-wax, in her Teflon cake tin into the oven,  'might'   just raise an eyebrow!

Lawn sales, rummage sales, garage sales, thrift stores, second hand stores, etc. my good man. Don't know what they call these in your neighborhood, but there must be something similar. You get the idea.

Have picked up a few major casting items for the cheap at the above. Just takes a little investigation.

Helps to keep peace in the kingdom or Queendom, Which ever may apply.

I have marked R. Dupraz as the solution however all your replies have been very useful. I have made up three different mixtures of lube using colouring to differentiate. I am still waiting to get my hands on the bundhook  and as soon as I have tested the loads and lube mixes I'll let you know how I got on.

Thanks again to everyone fr their help and advice.

back in the dim past of a few years ago i stopped using greasers in favor of paper jacketing slicks for my .45-70 rifles.  however, i still use my grease for lubing muzzleloader patch strips.  the lube is "gato feo" (ugly cat), it's an old 19th century formula and it's a dandy that's as good as any commercial or home brew bullet lube.

... do NOT substitute any of the ingredients!  double boiler melted, stirred and mixed.  its viscosity can be tempered by adding more beeswax as required.  mutton (sheep) tallow is a wonderful addition that won't go rancid as other tallows will, and it's great for the skin.

My ticket finally came through but I'm in Plymouth and the bundhook is two hundred miles away in Bisley.

In Col. Harrison's book: "Synthetic Grease is not  a good bullet lube.: I tried it, works fine. I tried a lotta lubes, any reasonable lube works fine. Unless we're talking about the "One group test", or "My cousin's girlfriend's uncle said..."-common proof methods here.

I take a capsule of flax seed oil daily on the eye guy's instructions; and I wonder if any of you BP nuts ever tried an oil or water/y capsule in amongst the BP. Might soften fouling allowing push out on next shot. My BP days are long over, or I'd try it. Of course, one does not require actual experience to speak authoritatively here.

(I don't care for your hat either. Is that really a hat?)

Emmert's lube is  very good and simple for BPCR :

10% Canola oil. (or Non-virgin Olive Oil- call it Emmertini's then)

Yes, my second favourite hat is that brown derby, bought from The Gentleman's Emporium a few years ago now.

Made me stand out when I had a proper job here with the NRAUK. (still makes me stand out as a 'daft old codger')

My favourite is a Stetson which my wife bought for me in Sheplar's just over ten years ago and which I wear constantly.

This is an old thread but thought that I would post this anyway. At least the following was interesting to me.

Recently, I have been going through my cartridge boxes, and shooting left over cast ammo from various past rifle matches. There were 76 rounds of 45-70's that I had loaded about five years or so ago for a "73" Trapdoor infantry rifle match that didn't happen, in a couple of boxes. An off the wall load of the Rcbs 45-500-BPS PB ahead of a poly wad and 60 grns of a particular lot of compressed Goex Cartridge BP. With 50/50 Bee's wax / olive oil lube.

Not really expecting much. I fired fifteen shots over bags at fifty just to use the loads up, more or less. Ten shots went into 2" and five into another group into 3" just below.. Then went over to the 100 yd rifle side and hit an eight inch gong offhand

the first shot. With some misses, fired the rest of the 26 rounds, which is all that I could stand, two handed while resting on a scissor jack rest. The issue sights were dead on at 100 and could repeatedly hit the gong when I could see that front sight. Most of the time, it wasn't there. Three breaths through a blow tube between shots.

The kicker. Now this is not about my marksmanship. But all about the load, the lube, sights and the very poor bore in that . Trapdoor

Rifle bore. --- shinny but completely  pitted, very thin worn lands, non existent from the muzzle down maybe two inches. shinny only because I polished the bore the best I could back when I got it.

Sights --- original "73", not the Buffington. Had to guess the position of that paper thin front sight most every shot.

No leading, maintained accuracy for 26 shots with three blow tube breaths between shots. At the end, cleaned up shinny with patches and 50/50 Ballistol and water.

Was pretty much amazed, given all of the above.

Oh, I threw the target away so have no proof or data and have no further interest in any. The remaining 50 rounds will likely get used up at our monthly lever gun silhouette matches trying to beat up those bloody animals.

I use SPG in my lubrisizers and for pan-lubing. It's the best available for BPCR shooting!

Today I got to play with my PH Enfield at 100 yards. All of your advice has proved usefull and true (not that I doubted it) My bullets cast from recovered lead slug are, with a bnh of 7.9, too hard. It wasn't until I reached 90 grains of FO Triangle (cooking) powder that any sort of group started to form. My home-made lube of 80/20 beef dripping/bees-wax was a little loose but seemed to keep the fouling soft. The bullets were a very tight fit although I suspect that pure lead will shrink more after casting. I can say that despite not shooting as well as I had hoped, it is only the nut behing the butt that needs tightening! It was a lot of FUN

Can't wait to get it out again.