Several weeks ago there was a post titled "Making Black Powder" by delmarskid.  In this post he mentions a book titled "Like Fire and Powder" by author Brett Gibbons.  Mention of this book piqued my interest and I purchased one on Amazon for around $8, read it from cover to cover and was impressed.  Brett Gibbons is an ordnance officer and researcher and knows his stuff.  So, if you shoot or are interested in black powder I think you will find this in depth treatise on the history, manufacture and performance of black powder to be quite informative.  Thanks to delmarskid for letting us know this wealth of knowledge was out there. 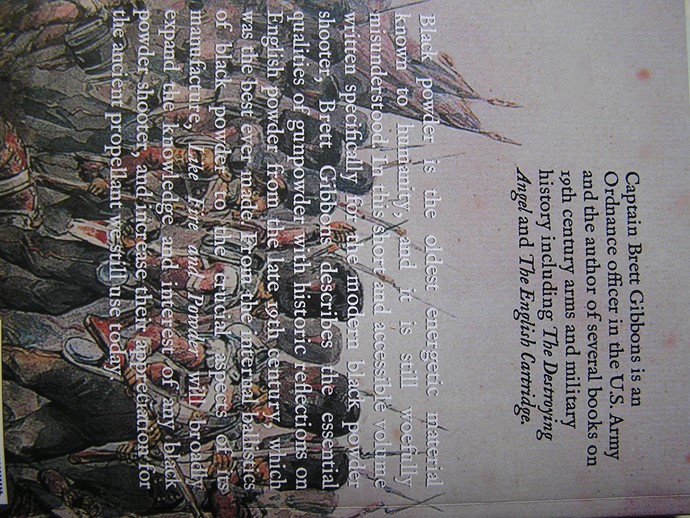 Thank you for the heads up on the book. I just ordered mine.

His other books are equally amazing. The Destroying Angel is a testament to the Rifled Musket and how its proper use changed the warfare paradigm. Also covered is how its misuse (by both sides) extended the US Civil War for years.

The English Cartridge is an amazing read on the development and use of the paper cartridges for the rifled muskets of the era, notably the Enfield and Springfield rifled muskets and how the use of this cartridge in rifled muskets transformed the infantry from Napoleonic bayonet fodder into a cavalry crunching force multiplier.

Brett's prose is refreshing and his first level research has produced some mind changing data on the use, or misuse, of the rifled musket (the 1853 Enfield and 1861 Springfield Musket) on the battlefield.

The book is worth the money just for the history of manufacturing BP.  I think I am too old, fat, and lazy to make BP his way.  After reading the book I do look at BP with a bit more respect.  I would love to get some of the English powder he speaks of in the book!

It’s a lot of fiddling around but the stuff shoots good. Four bucks a pound too.

I bought and read Gibbons' book after reading cove's description of it.  Gibbons was apparently successful in making a very high quality BP (equalled or exceeded Swiss BP at a minimum It was also fascinating to learn how the purity of KNO3 and charcoal affected powder quality, but Gibbons efforts to achieve that were a labor of love and labor intensive.  I've got to say, I doubt he was producing BP for $4/lb., but what he did produce was of extremely high quality, if his claims are true.

Just wondering. There must be some hazard in making blackpowder, even in small quantities?

CBA Member
RicinYakima posted this 03 May 2022

I bought the book, too, and was amazed at what he did. I think the powder he made was about $50 a half pound, but he had fun and learned a lot.

CBA Member
delmarskid posted this 03 May 2022

I have followed Brett’s methods to the best of my abilities with gear that I have on hand with the exception of a rolling brass tumbler and puck forming die. I bought these for about $150.00 on Amazon. 10# of salt peter was 30 bucks through Walmart, 1# of sulphur was 10 bucks off of Amazon and I made my charcoal. With screw ups purifying my salt peter I’ve made about 7# of powder. I can get 1100fps with 500g minie (burton) ball and 75g of my powder by weight. Accuracy is under 2” with 5 shot groups at 50 yards. I run a damp patch every 5 shots to maintain this accuracy. I can load over 20 times before loading gets tough but groups open up to 6”. I’ve found a guy who sells 50# bags of 99.8% pure salt peter for $125.00 shipping included. This could make me about 60# of powder if I can locate less expensive sulphur. A kilogram of powder takes me about four hours spread over two or three days. I’m going to get to work on the 45-70 when I get the chance. I can only get about 55g in a case . I’ll have fun with this getting up to 1200 fps with my 525g greased bullets.