I had what was left of a 4 pound keg of Dupont 4895 go bad. It ate up the powder can and smelled acidic.
The strange thing was only about one in four of the granules had decomposed. The keg was about 20 years old.
OK, so I should have been shooting more! I have other powders which are over 35 years old which are good

Unfortunately records showed I had a  hundred 30-30's loaded with cast bullets and this lot of powder.
I pulled one and found it corroded inside. I pulled the batch and they were all heavily corroded. 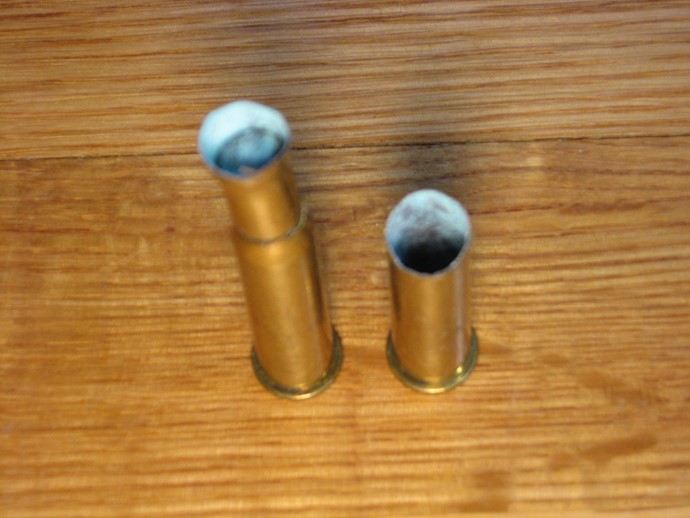 Wow.  I think you are right, you should have been shooting more!  Sharp in his book mentions some of the early powders going bad, but I have never heard of it with the newer powders.

I've had the same thing with IMR 4320. I wrote an article on this issue, but have no proof. It seems that when DuPont sold the canister powder business to IMR they off loaded a LOT of junk that IMR sold in the  1990's. Send me an email address, and I will send you the facts that I found.

Always heard about it but never had it happen. How was it stored? Thanks for sharing, Squid

It seems rare but I have had it happen with both a stick and a ball powder.

Heated basement reloading room for almost thirty years, then in my shop for two years outside temperature.

I have always thought and in my limited experience, modern smokeless powder would not go bad if you stored it in a typical good dry basement environment - say 60 to 70F, and not too humid.

It was good you figured this out from the can, and not by firing that ammo.  I would guess with typical light loads that the ammo would go "bang" and the bullet would exit the barrel, and the brass would not fail, but I can't guarantee any of that!

The powder was stored in an air conditioned room. Temperature is important, cooler is better. A friend had a back yard loading shed which was over 100 degrees in the summer. He had many powders go bad.

Mitch, all powders go bad except black powder. Smokeless powders slowly decompose, inhibitors are added to slow the decomposition but they can only do so much. Poor manufacture can leave acid in the powder and shorten the life, not enough inhibitor can do the same.

Good powder, stored correctly, will last a long time. I too have some old 4831 made under government contract. Each batch was carefully tested by an independent lab to make sure it met the specifications. It may outlast me, which is the idea.

I inherited three cans of IMR 4320 that was packaged in 1991 (E91 / OC 9 / L5158). They were perfect on the outside and still factory sealed. When I opened the first can, fine rust dust came out. The odor was not of decomposing nitrocellulose, like Urea or nitrate salts, but very like diethyl ether.  All three cans were the same inside.

So, I cut a can open and found rust on the inside of the can where the powder had laid next to the coating on the steel. It was heavier at the bottom of the can. The powder appeared normal except for the coating of rust and no coating or graphite on the kernels.

I was able to separate the rust out by trickling it down a slope with a 40 pound rare earth magnet under it.

Then I checked to see if there was some sort of chemical decomposition going one. If there were one of the main products would be NO2 or NO3 as vapor. Using litmus paper, there is nothing going on. Everything is pH-7 even with keeping the kernels damp for 48 hours.

Therefore, I don’t think it is powder going bad, but something palmed off to reloaders that dissolved the liner of the can.

However, I would never shoot this stuff and it is not what is on the label. 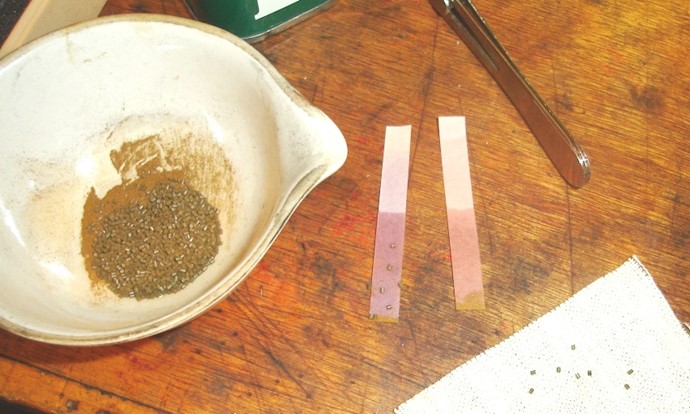 Was that an unopened can? If it was I might want to tell Hodgdon about it. Is there a lot number on it? I was thinking maybe the powder grains were reduced in size from degradation but from what you are saying it seems otherwise. I never saw anything like it. Thanks, Squid Boy

I think the date on the can may be the packing date and not when it was manufactured.

In my can of 4895 some of the granules were fully decomposed, they left little brown husks. About 75% of them appeared  to be normal 4895, but I did not measure them. Smokeless powder manufacture is not a perfect process, some lots are a little fast, some slow. We know manufacturers blend powder for cannister lots. It looked like my powder might have been a blend and maybe they were trying to get rid of some old or out of spec powder.

There are methods for testing powder for residual acid and excellent chromatographic procedures for quantifying the amount and type of inhibitors. We know how to test powder, but this takes equipment, expertise and is expensive. As consumers looking at powder we can not tell if it will be good for 10 years or 100.

Both our experiences have made me lose trust in Dupont/IMR or whoever they have farmed out powder making to this year. It has made me warry of buying a keg, I lost more than I saved on that 4895.

Yes, unopened can, Yes date code for packaging in post. Red material is iron oxide, rust, and magnetic. Hodgdon has no interest in powder sold by previous company, IMR.

I buy very little powder any more, as I have enough to last the rest of my life for handguns. The only things I buy are unopened cans of Hodgdon's WW2 surplus 4895 and 4831 with the brown and white labels.

I am in the same place as Ric, great stock and buying new powder only for Schuetzen and Production / Military competition.

There was an IMR powder sale over 35 years ago where the price was too cheap and I was working a lot of overtime. I am still using that powder today and not hunting as much as then. (I had to buy two .220 Swift rifles to use up this powder.)

Still sealed and good powder many times when I open it. But, any that do not look and smell new when opened are used in the flower beds for fertilizer. This happens one in twenty times.

That about 75% of the powder appeared normal, and 25% was badly deteriorated makes me think your guess is probably right, the 25% was from a different batch, perhaps already old.

I have a good bit of old IMR powder made by DuPont, so far it's good when I check it.  Been keeping it in a cool, dry basement.  Got a bunch of Winchester 748 made by Olin as well.  When this stuff is sealed up I am reluctant to open it unless I intend to use it.

I don't think it is the powder "going bad". There are no nitrates that would be the main product of decomposition. It appears to be a chemical coating on the granules that has dissolved the coating on the inside of the can and oxidizing the metal. The red stuff is all rust from the can and every granule is equal. FWIW

I have experienced a little 'rust dust' on some old IMR powders.

I felt that they loaded a little heavy so I dropped 'em a little light.

My theory was that the ether that had left old powders had left them less dense, therefore the same weight was a larger volume.

They shot a little harder but never gave me too much concern.

I wasn't loading them near the top of the chart and was using them in a strong action.

Used up the old powders and the new stuff works great!

I shoot, therefore I am

I have half a dozen cardboard cans of DuPont #80, some with the outer cellophane wrapper intact. This was Elmer Keith's favorite powder. The oldest dates from the late 1920's, the rest approach the early 1930's. It is all in perfect shape and holds the same ballistic results that Phil Sharpe notes in his book. Most powder that is elderly that I have run into and continue to use seems to have aged very well. For what it's worth, when the #80 powder is fired in a load, I can really say it distinctively stinks!!

You guys have set me to thinking about my powders. I have some powders that are quite old,30 years or more. They all seem to be in fine condition. All of the powders that I own have been kept in the house which has central heat and air and I presume this would help prevent their breakdown. Most of my powders are of fairly recent purchase. The older powders I still use, but not very often. I think I will check their condition after reading this. I have torn old ammunition down that did appear like the cases in the picture, it was not ammo that I had loaded however.

i have used older powder and never had that problem

I have also use old powders with out any problems ,