I have inherited a WWII German bring back rifle in 8mm. It appears to have been a commercial gun, not a military one (the barrel has a rib & was dovetailed for a rear leaf-type sight). But, sometime after it came back, Bubba replaced the stock & put a scope on it.

It has been shot (before my time) with US commercial 8mm Mauser hunting ammo, but none of the fired cases came with the gun.

I have read (in COTW) that, after WW One, Germans were not allowed to own rifles in the 8mm military chambering & that many had their chambers lengthened to take 8x60 rounds. So I’m trying to figure out if this gun is chambered for the 8x57 or 8x60 cartridge. I have a set of 8x57 go/no go gauges - will they work properly in an 8x60 chamber?

I do have an assortment of cast and jacketed bullets in 8mm.

Thanks in advance for any suggestions.

I’m going to play around with this tomorrow & may get lucky & figure this out on my own?

Well, Folks - mystery solved. I took this gun out to the range for the first time yesterday, along with eight old (2013) 8x57 handloads (3031 under 170-gr jacketed) that I had left over. They all fired OK, although they sprayed all over the target at 100 yards and the chrono-ed velocities ranged from maybe 1950 to 2200. I need to revisit the action and scope mount screws and give the bore a better scrubbing. Then head out again with some new handloads.

Anyway, the fired cases clearly show that the chamber on this rifle is cut for the "plain vanilla" 8x57.

Thanks again for all of your interest and inputs.

Tom, Since you already have a headspace gage for a 8 MM Mauser you can use it to get an idea of the chamber length. Just take some tape like scotch tape and measure the thickness. Then start adding layers of tape to the end of the HS gage. When you get to the point where it starts to show some resistance to bolt closing, stop and see how many layers of tape you added and add that to the nominal HS length of the gage and that will give you a rough estimate of the Hs of the gun. It seems that when I have done that in the past, that a layer of scotch tape that I was using was around .002" or therabouts. Normally a headspace will be ground to the nominal HS dimension. Most chambers are considered OK if they fall within plus or minus .004" of the nominal dimension. Note that the Europeans have a slightly different standard for their cartridges from the SAAMI dimensions that are generally accepted here in the US. So, your chamber my be cut to the Euro dimensions. I think their system is called C.I.P. standards. If you get more than three or 4 layers of tape and it still closes the bolt easily on the HS gage, you probably have an out of spec. HS dimension for a SAAMI chamber.

Tom,   Here is a copy of the SAAMI spec. sheet for the cartridge and chamber specifications.  Look at the chamber drawing that I will add here and you will see that the 8 MM Mauser headspace dimension is 1.8743" Minimum to 1.8843" maximum.  It is measured from the bolt face to the datum line on the shoulder.  The datum line intersects the shoulder at the .392" diameter along the taper of the shoulder.

Firing a case with a fast powder and filling the case the rest of the way with cream of wheat is a good way to expand a smaller case to fit the chamber. I have used around 10 to 12 grains of a powder like red dot or green dot with good success. Use at your won peril as I'm just saying it worked for me.  It might not work for you.  I started out low and worked  my way up till I got a good case fill-out in the chamber.  Once you have a good, expanded case, you can measure the headspace by measuring from the shoulder datum line to the end of the case ( bolt face end) and that will be an approximate headspace for that chamber. Keep in mind that the cast is springy and will contract slightly and be smaller than the chamber.  But it will be within a few thou. if you get good expansion.

I've designed my own cartridges and made my own headspace gages by using my height gage and layout granite plate.  I would just make a precision hole in a block of steel that was the dia. of the datum line point on the shoulder. (In the case of the 8 mm it would be a hole of .392" diameter) stand the case up vertically in the hole neck down and measure from the surface of the hole to the end of the case or gage.  That gave me the HS dimension. There are other ways to do it and one is to use a set of indicating calipers with a .292" hole to locate the spot on the shoulder and measure to the base of the case or HS gage. You can do this much more precisely and safer by making a cerrosafe chamber cast and using it to make the measurment.

If you do this, you will know pretty closely what the HS is of the chamber in which the fired case came from. Or, if you are a machinist or know one he can make a gage set up that will work if you show him a chamber print.

Another option is to prime and load ten grains of Bullseye or other fast powder and fill the case to the neck with Cream of Wheat or other small granular media.  Put wax in to hold the media in and fire up into the air.  This will tell you what the case looks like.  I would use a commercial case, new preferably.  The fact the rifle has a long throat is not surprising as this was common in European rifles.  But testing for the longer case is a good idea.  If you had some 8x60 brass you could just try that.

Yeah Tom I can see it's not the same rifle. Thanks for letting me know.

Thanks - I have the dies, but will have to root around and see if I have a .30-06 case. I got rid of my .30-06 rifles and dies a while back, brass, too - but maybe I have a stray one or two kicking around somewhere. Thanks for the tip.

Remove decapping pin and screw your sizer in 1/4" from the shellholder. Lube  a case and start feeding it in. Measure or compare with an 8x57 case to watch how much you're sizing, looking at where the neck is being pushed back to. When it gets close to an 8x60 go slower with the adjustment as you go, maybe a 1/4 turn at a time. Check in rifle at this point. I'd lubricate the case after checking each trial adjustment.

It will take a little while but it should be adequate for your purpose.

OK, time for an update. This gun was a WWII bring-back by one uncle, but ended up with another uncle. Both uncles are long gone.

Somewhere I have a photo of the gun hanging on a wall and you can see that the original buttstock had one of those German cheek rests on the left side. I wish he had left well-enough alone.

I'm not set up to do a chamber cast, but I have been able to determine that the gun has a very long chamber. But the magazine looks to be standard, so this gun is either chambered for the standard 8mm Mauser, or maybe the longer 8x60 Mauser.

I have a handful of 170-gr 8mm Remington Core-Lokt jacketed bullets. One of my Lyman reloading manuals shows an OAL with this bullet of 2.85". My chamber measures long enough to seat one of these bullets in a cartridge 3.509" long - so something seems odd.

I'm not sure how to accurately measure the barrel length, but the bore (from bolt face to muzzle) measures right around 23-5/8" (or right at 60 cm).

One of my cousins has some brass fired in this rifle and I've asked him to send them to me.

The bore looks strong, but needs a good scrubbing - good winter project. There are no manufacturer or gunsmith ID marking on the gun - anywhere. There is a neatly stamped "H.M." on the underside of the barrel. Not sure if that designates the barrel manufacturer, or maybe rifle company or the gunsmith?

Bubba mounted a scope using a "Marbles Game Getter" see-through mount - which really puts the scope up there high. The bolt handle has been altered to clear the scope, and one of those Buehler low-mount safeties has been put in place.

Here are a few pics. I likely won't do much else with this gun right now, except to clean it up and reassemble the parts (triggerguard, magazine, buttplate, etc - all missing in the photos). Once I get the fired brass, I'll work up some loads and try her out.

I would normally attempt to restore a bubba-ed rifle like this, but I'm going to sentimentally leave it in its current configuration.

Thanks for the interest.

Oh, and MP1886 - this is not the same gun you encountered. This one lived in Eastern PA, then NJ & Seattle, and finally in Portland, OR. 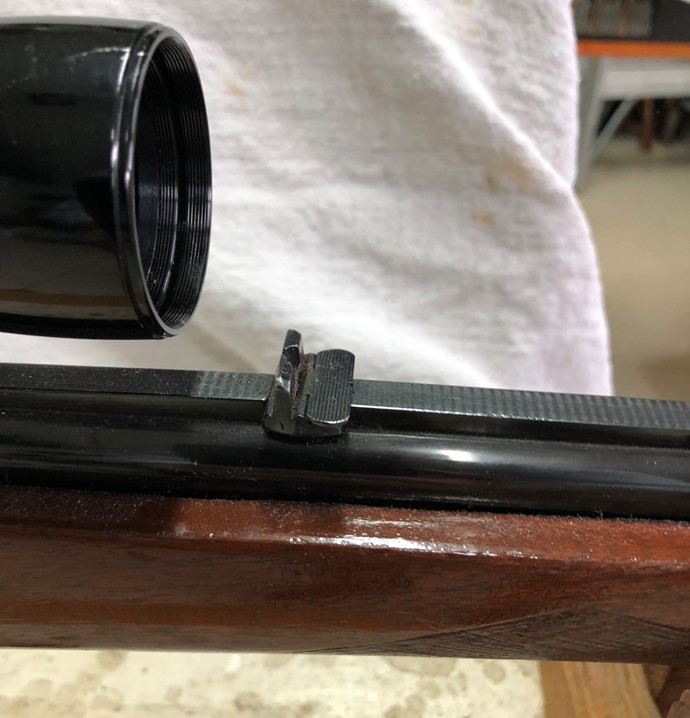 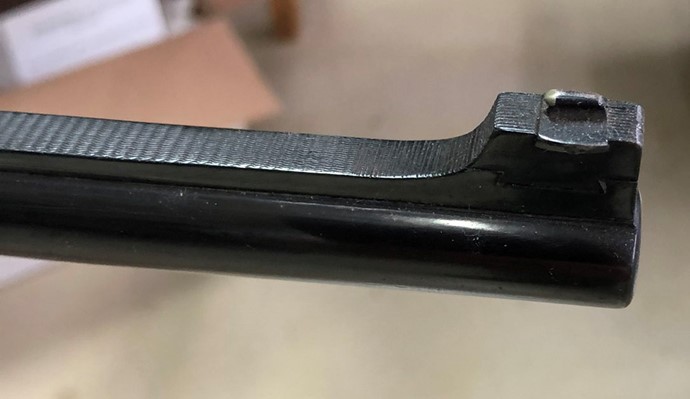 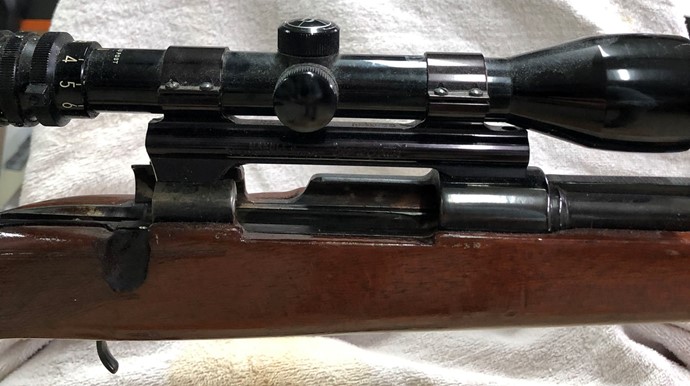 Just to get an idea without having to buy cerosafe you could just fire an 8x57 Mauser in it.  Here's the story on the 8x60: Extending the 7.92×57mm Mauser cartridge case by 3 mm (2 mm of lengthened body plus 1 mm of lengthened neck) created the 8×60mm S.   If I did fire an 8x57 in I would reload one with a safe reduced load and make sure the case is back against the bolt which it should be with a claw feed.  Then compare fired case to another unfired 8x57.

This is a interesting story because my dad best friend took a sporter 98 Mauser back from when he was a solider in WW2.  It too had a rib on the barrel and the stock was a sporter stock.  He too was from the Pittburgh area.  Do you know more about the rifle?  If you do pm me.

BTW it wouldn't hurt to check your rifle with the gauges.  If it is an 8x60 even the NO GO would be sloppy.

hooray for getting an interesting old gun back into a shooter.

i wouldn't use the gauges but would go directly to >>

cerrosafe casting for the chamber and throat.

a soft lead bullet to push through your barrel to measure groove diameter and bore diameter.  check your twist also .  if a non-standard barrel it could have non-standard dimensions.  maybe even probably.  measuring will help get a good load faster ... and safer ...

then you will know for sure what you have.   i would worry that there are variations of variations.