The puzzling thing is that it does that only when the barrel warms up.I removed the forearm and it bears evenly on the barrel.

Coming home,I dabbed the inner part of the barrel with Ben'd Red;I intend to bring it back onto the bare metal and start over with regular 50/50 Alox/beeswax lube.

Anybody has any idea what is causing this?

Since I live in Canada and Ma Bell hits me pretty hard when I call in US,I'm looking to find another way to communicate with you.Maybe Facetime.

Or you can pm me and I'll try to answer to the best of my experience.Really like it if I could be of some help.Let me know which you prefer.

yes i never recieved the PM.Id like to talk to about the Pedersoli 38-55 specifically as im having trouble.If you would email me at [email protected] i can give you my cell number if you have time to talk in depth with me about your solution and results. Thanks!

Barnabus:I know you sent me a pm;I answered it but you obviously didn't get the answer.I'm sorry and I'll try to see what went wrong.Same thing happened with another forum member a couple of days before.Really have to look into it!

The lube I use for the 38-55 is the one I make for rifles which is quite soft.I also use it in my .308.Lithium or graphite grease mixed with parafin(canning wax).The parafin is used only to harden the mixture as it doesn't have any lubing properties.I add some floor wax which contains carnauba wax(aprox5% per volume).

But no,I do not size and lube then add liquid Alox.It might work but I feel that it is overdoing it.I've tried it once and didn't see anything that suggested an improvement.

what lube did you end up using to stop the leading and get consistant accuracy? if i read correctly you used 50/50 AND added ALOX after sizing and filling lube grooves?

PS: I sent you a private message

For my .25-50 WCF, I have both setups and cannot see any noticeable difference on the target. I am still experimenting, this is a question that is bugging me also. I have two Stevens 44 1/2 rifles, two barrels, Shilen and Krieger, cut by the same CPA reamer.  (The .25-20 give less recoil than the .32-20 CPA and less recoil is needed until my jaw bone graft is fully healed.)

Setup #1 is the Weber seater that is guided by a cartridge and has the leverage to make the bullet slide in. This works well, I can feel the resistance as the bullet slides in and know a bullet offering slightly more resistance will shoot in the nine ring at 12:00 o'clock. Therefore, I hold on the 6:00 o'clock to counter the feeling.  A bullet that slides in far too easily goes into the backstop.

Setup #2 is the Meyer push seater with a case. I short seat this bullet and use the .25-20 WCF plugged case provided by CPA for the final seating. This is because I cannot get the bullet to lay in the chamber and slide on in to my satisfaction. The block sliding up and pushing the plugged case does not give the same tactile feel.

The .38-55 Rolling Block I shot many years ago mentioned above evolved to a similar process. I drilled the base of a case to use for the preliminary seating of the bullet. There was a push rod through the head to get the bullet into the leade. Then a plugged case to finalize the seating. This was also in part because the design of the Rolling Block does not give great camming power.

I'd recommend a case with the head drilled and push rod to get the case started, then a plugged case to finalize seating.

Good luck and keep us informed of your progress.

I too have found 300MP to be a good 38-55 powder and along the way, discovered that magnum primers help that powder shoot well.

Not yet breech seating but am considering it. Is there any difference between the "push type" and the hinged seaters? The chamber was not cut to accomodate BS but I suspect a tapered bullet would help in that regard.

A friend gave me few of the NOE bullets to try. If they shoot well, I will buy the NOE.

Has anyone out there had any experience with a NOE mold #376-329 RN PB? It is a slightly tapered bullet, which migh be helpful for breech seating.

Ken,I like to think that it is not only one well kept secret but a lot of many details which when cumulated gave the good result.Having a sizer opened up to just kiss the sides of the bullets plus a soft lubricant were two important things.

Another one I found  helped a lot is that I was casting at 710*F.I had rejects in order of 12 to 15%.Such a high % of rejects from visual inspection led me to believe that there might be more with defects I could not see.I started weighting them and found that I had many at the ends of the curve(+- 5gr was the norm).I increased my casting temp to 750*F and presto,my reject % went down to 4 to 5%..

Case prep is another area where I now spend more time(anneal,trim,deburr,put enough bell before seating and not crimp but just remove the belling).

Using magnum primers made a real difference along with the filler;no more trail of unburned powder in my barrel.Next up is to experiment with the seating depth but I really think that I am at my(not the gun's)limit for shooting with metallic sights.But just for the sheer heck of it,I'll try anyway!

so next time we can all just skip directly to the smiley part ...

who really enjoyed this adventure ...

I'm glad you got it dialed in. I'm another fond user of the lithium beeswax .

Almost 1 year (and many tests)later,I'm more than happy to report that I might be hot on the Holy Grail accuracy trail.From a gun that would throw its bullets sideways at 50 and sometimes miss entirely the target,,I finally am smiling when I look at my targets;1 1/2 to 2'' 5 shot groups at will at 100.Here is the story.

Bullet mould from Accurate 4 cavities made out of aluminium(38-328M ordered to give birth at .380'' with 25;1 which it does beautifully).RCBS sizer die opened up to .380 by specialized machinist(not me,I'm all thumbs!).They come out lubed with my own mix at 330gr.(1/2 lithium grease,1/2 beeswax I bought from a local honey producer;quite soft good for winter.I add parawax to harden a bit for summer use).

Shooting from the bench,the 30'' bbl High Wall comes back with enough authority to shift my baseball cap a bit but I solved that problem by removing it.The thing is trying to tell me that we can do better

At one point I was almost ready to consider selling it.Luckily,even if that's a mistake I've done a few times before,that is not one I'm about to redo with that one.Getting older making you wiser might a good thing after all!

My go to powder in my CPA, Krieger bbl, 14" twist, Hoch BP tapered bullet 25:1 mix, Emmerts lube is Alliant 300MP. A fellow on the ASSRA site has used this powder in testing, 40 pounds of it, and has the results to show that it is superior in the 32/40 and 38/55. I concur with him as I have also used this powder extensively.

Had some rounds left over after an NRA  BPC midrange match

Same rifle only with Black

I have a Marlin CB 38-55 that is also a shooterl. No reason that that Rolling Block shouldn't be as well. 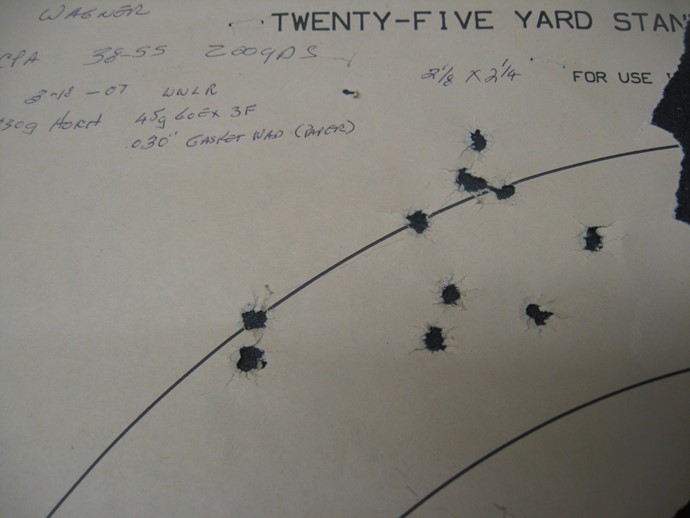 That very nice group looks like the one I lucked-out with a Marlin 336 in 38-55 using 18.0-grains of 4227, also at 100-yards but a 250-grain Accurate bullet. That powder is definitely on my list to keep trying with my new project gun. I also plan to play with black powder in the rifle.

Beltfed,my bullet is cast from a mold from Accurate;it is a 5 cavities 38-270cb but with 1 band added.The bullet has a bevel base no gc.This brings the weight right at 330gr with 25:1.I do not size them but will have a .375 sizer opened up to .380 as my bullets come out at around that.I dipped them in my lube heated in a crockpot.Lube home made from lithium grease,parawax and aprox 5% floor wax made of carnauba.One group was at 1 1/16 and the other at 1 1/8.

Darn cold and windy up here,We had almost 1 foot of snow yesterday but on Friday,if the wind calms down,I might try it at 100. 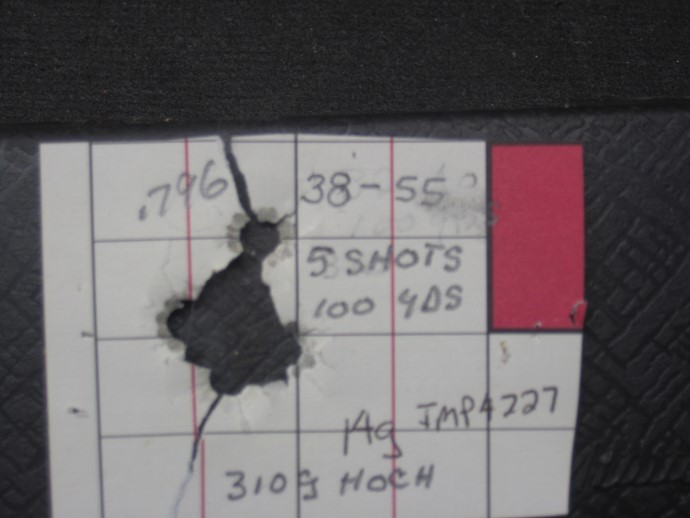 Might be interesting to try wiping the bore between shots with ER ten a dry patch and see how long you can hold a group. Personally I think your bullets are too small. I have only messed with an 1889 Hi-Wall and a Hepburn in 38-55 and they are both GONE! Miserable mismatch of fat bore and tight chamber neck. .382" bullet breech seated worked, and soft lead with black powder worked in fixed ammo. Miserable beasts!

From the peanut gallery....

I have a Remington Rolling Block with a new Green Mountain octagon 1:12 twist barrel. The scope is a 24X Unertl. It still has that horrific issue trigger pull. My RCBS trigger pull gage tops out at 72-oz. (4.5 pounds) and it didn't budge. I'm guessing its at least 10-pounds. The guy doing the finishing is also going to reduce the pull to about a pound. It won't be like my 2-oz. Jewell triggers but it will be a world of improvement over the issue trigger.

Cases are the longer variant of Starline. Primer is CCI BR-2 with SPG lube. No idea on muzzle velocity.

The pot was just filled with 15:1 for the next casting session.