Wondering if anyone here shoots this old wildcat.I recently bought a win 1885 that I think is that caliber. Would be a 30-30 necked up to 35 cal.

As "Pappy" Hemingway said about salmon fishing, those two rifles are well worth whatever you had to pay to get them!

My pics really don’t do the gun justice. I bought it at the rock island auction along with another gun for one price. The other, an 1885 in a 22 hornet that is just as good as the 35/30-30 pictured. It came with a 8 power unertle scope. I don’t know who built the rifles, but I am sure it was the same person who did both. They are works of art. The barrels are prestine, I think someone did the work before WWII

That Winchester Hi-Wall is a very beautiful rifle, do you know who built it and about when?  The stock in particular is gorgeous.  Both the wood itself and the shaping and checkering.

Arnie, good enough to kill any elk that walks.

YES , indeedy, I like the 35 cal for my "modern" deer hunt caliber.

Clocking 2350fps over my Ohler 33 chrono.  Never has failed to do a good job on No.Wi. Whitetails.

Thru and Thru penetration, and knockdown, with being able to "eat up to within 2" of the bullet hole.

the most economical way to go to lever gun 35 cal.

cast bullet clocking about 1800fps.  That should also do the job.

Although not catalogued, Tom can make it same overall length and approximate weight having a 0.090" GC heel instead of the .175" high base band with .03 bevel base and instead with .085" base band above the GC heel.

I did not feel the need for a GC base because the Dacron fill and grease cookie prevented leading in loads as heavy as I care to shoot. The great majority of my shooting in this caliber is at .38-55 black powder velocities around 1300 fps.  I make only VERY limited use of heavier hunting loads during the deer season.  The extra velocity is NOT needed for adequate killing power, but only to flatten the trajectory to enable more certain hits if I want to shoot across fields past about 125 yards and push out to 150 or so without having to flip up the ladder sight, fooling with the elevator slide and waiting longer for the bullet SMACK~!

Near-perfect Eastern woods rifle.  Through and through penetration from any angle, good killer, AND little bloodshot meat, you can eat right up to the bullet hole.  And it won't blow a turkey to flinders if the seasons coincide and Mr. Tom coooperates by wandering within shooting range of your deer stand. 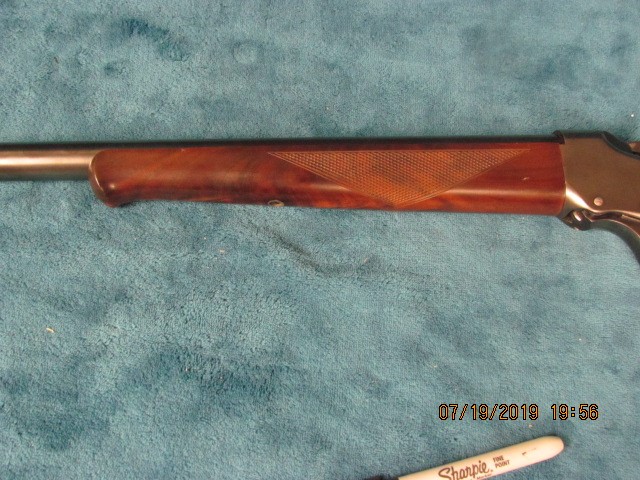 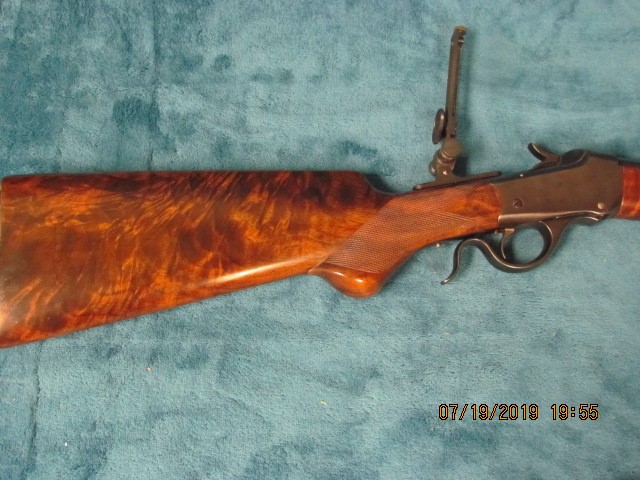 Ed, did the slower-burning powders in the hunting loads give about the same accuracy as the Bullseye loads?  I would expect them to, but I am guessing.  I would imagine a 1700 fps load with a 250 or more grain bullet would generate some pretty brisk recoil in that carbine, so you may not have shot many groups with them.  I don't think I would care to.  Wondering, too, do they shoot to about the same point of impact?  With the right bullet alloy, this ought to make a really good hunting load for most any North American game.

Yes, the 30-grain powder charges with the heavy LBT bullet let you know when they went off, but not punishing.

Did not shoot groups, but checked zero with open sights on steel targets which it hit easily at 100 yards and with authority.

Yes thanks for gettin me more info on this interesting caliber. Want to try her out, as inside of barrel looks to be 100%. Would like to use it at one of your competitions. I am going to post a pick of it when I can figure out how to post pics.

The .357 Herrett likely runs at much higher pressure. So far as I know none of the published .357 Herrett data was ever pressure tested to industry standards, so you are on your own nickel.  The cases are also more trouble to make because the cases must be formed, trimmed, inside neck reamed, annealed and fire-formed.  The .35/.30-30 is much easier.

Ed, did the slower-burning powders in the hunting loads give about the same accuracy as the Bullseye loads?  I would expect them to, but I am guessing.

I would imagine a 1700 fps load with a 250 or more grain bullet would generate some pretty brisk recoil in that carbine, so you may not have shot many groups with them.  I don't think I would care to.  Wondering, too, do they shoot to about the same point of impact?  With the right bullet alloy, this ought to make a really good hunting load for most any North American game.

Thanks for another great article, anyone with a shot-out 30-30 or 32 Special now knows at least one way to bring it back to life.

Ten years ago I acquired a very much-used 1894 Winchester .30-30 with shot out barrel.  Factory jacketed loads keyholed and cast loads with the largest bullets which would chamber wouldn’t stay in your hat at 100 yards.  In the 1980s Roy Dunlap built Ellis Lea a wildcat .35/.30-30 Marquart on a Remington 788 which worked well.  I thought a lever-action in this caliber would make sense, so I sent my 1894 to John Taylor for relining because due to condition it had no collector value.

John roughed the chamber using a .30-30 reamer with .35 cal. pilot and used a separate .35 neck & throater.  My old 1894 NOW uses .30-30 brass necked up to .35 cal. with no other change.  John recommended relining instead of reboring, because old nickel steel Winchester barrels often are difficult to get good interior finish on a rebore.  Cost is about the same either way. Original markings and patina are preserved.  My new bore is 16-inch twist with rifling dimensions the same as for the .35 Remington.

I wanted a cast-bullet rifle which I would use common jacketed or cast bullets and common .30-30 brass which I have in abundance. The objective was to “split the difference” between the .32-40 and .38-55 Winchester.  It does exactly that.

Sinclair provided a custom Redding die set which easily necks up .30-30 brass to .35 in one pass. 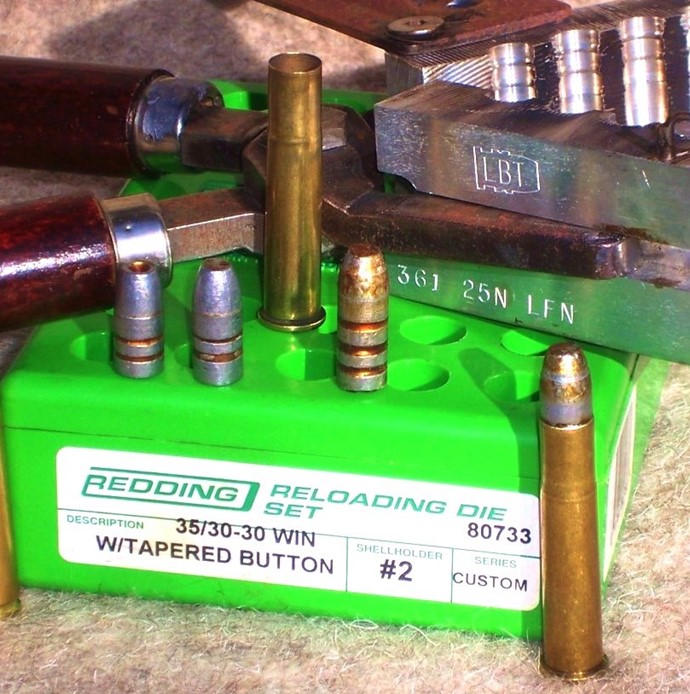 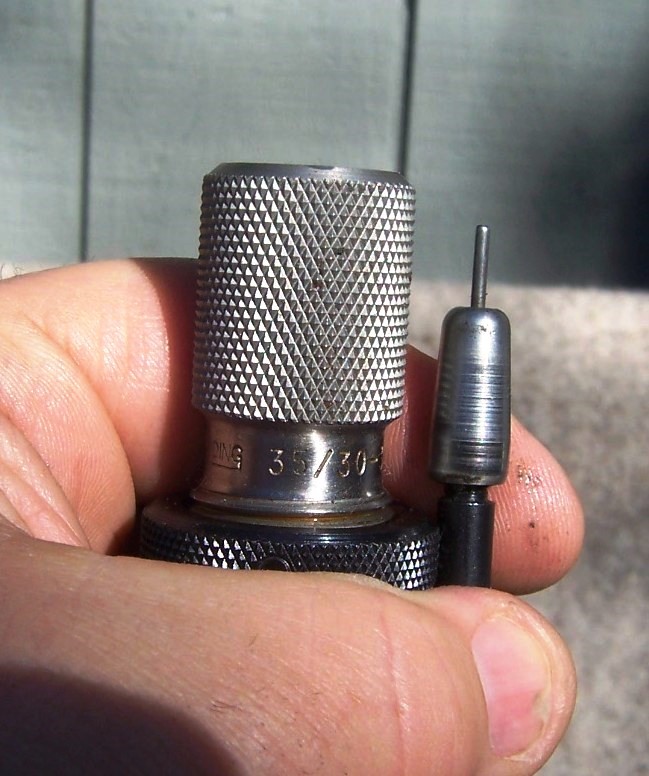 I can use either Starline .38-55, 2.085”, .32 Winchester Special or .30-30 brass as feedstock. There being no pressure tested load data for this wildcat, I measured water capacities of the .35 Remington and .35/.30-30 to see how close they were. Brass in both calibers was Winchester, the .35 Remington case was once-fired from a Marlin. Capacity in grains of water when filled to base of neck:

When a 200-grain bullet is seated in the .35/.30-30 case, its base is about 1/3 the way up the neck, so I took another measurement, filling the case neck with water and carefully squeezing out the excess pressing a bullet to the crimp groove in the fired case.  That result was 37 grains. I determined that using .35 Remington load data was OK as a guide as long as I stayed a grain or so below maximum loads. This has worked perfectly well in practice.

I sent Saeco #351 blocks to Erik Ohlen at http://www.hollowpointmold.com with an upset throat slug from my .35 Winchester model 1894. Erik did his inset-bar conversion, truncating the nose to a .25 diameter meplat, shortening the nose length to .50 from crimp groove to meplat. The cup-point nose cavity is of 60 degrees included angle and 0.6 of the meplat diameter. Erik also cut a new front driving band ahead of the crimp groove which is .175 wide and .359 diameter to fit the throat of the relined rifle. He also widened and enlarged the rear driving band while reducing the width and depth of the lube groove to strengthen the base. 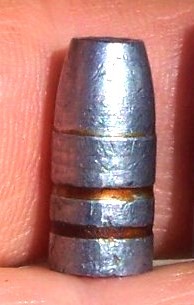 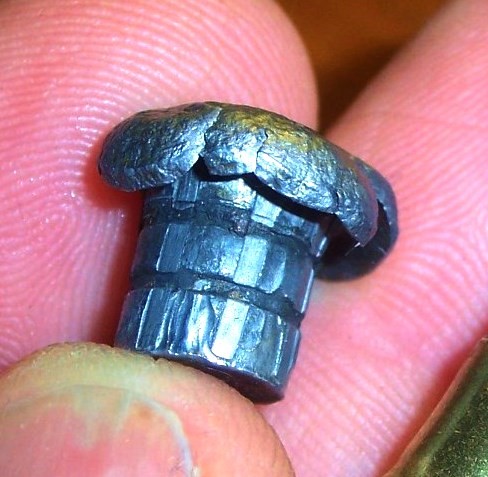 Having a crimp groove and one small grease groove not much larger than the crimp groove is all that’s necessary, because velocity will not exceed about 1400 fps and this plain base bullet will be slobbered all over all over with Lee Liquid Alox anyway. The modified bullet weighs 200 grains in soft BHN 10 alloy, vs. 208 grs. for the original Saeco spitzer.

Overall cartridge length when crimped in the reformed .30-30 brass is 2.52", which is ideal to feed perfectly in the Winchester 94. The bullet shoots better than I can hold with 8 grs. of Bullseye at about 1300 fps. The bullet was modified to provide a longer bearing surface ahead of the crimp groove and its forepart now fits the “.35 Whelen style” throat of my relined and rechambered 94. It looks just like a .38-55 slug which has been “shrunk in the washing machine.”

Open-sight groups shot at 100 yards, hand rested on the deck rail were about 4 inches, eyeballing strikes on a freshly painted steel gong. No different from any other open-sighted 94.  Charge establishment tests were shot with Bullseye and 201-gr. plainbase Modified Saeco #351, by http://www.hollowpointmold.com  Ten-shot strings.

Subsonic loads with the 200-gr. plainbased bullets were quiet and low noise.  Ballistic uniformity with Bullseye was not acceptable below 1000 f.p.s.  I didn't use any case filler and made no attempt to orient powder charge, but just shoved 'em past the loading gate, levered them into the chamber and banged them off, multi-tasking feed check, velocity measurements and gong music.  Groups eyeballed in the spotting scope observing strikes on a freshly spray painted 12 inch gong, judging against the gong diameter for each string averaged about 4 inches, typical for an open sighted 94. Winchester LP primers showed no pressure signs and didn’t flatten.

7.2 grains of Bullseye is a bit light, but fairly quiet and shoots well.  I don't recommend loading less than 7 grs. of Bullseye in this case, as velocities get erratic.

Loads bracketing 8 grs. of Bullseye all shot very well and gave uniform velocities without any bore leading using 10 BHN alloy.  The bore began to lead at 9 grains of Bullseye. Accuracy declined as velocity very much exceeded about 1300 fps. But the 9 grain load is fine in cold weather below freezing and shoots as good as I can hold.

Other powders tested, #2400 and RL-7 were disappointing with the 200-grain bullet. I determined that for loads with anything slower than Bullseye I needed a heavier bullet to provide enough shot-start resistance to build pressure for a clean burn.

I sent an upset chamber slug and fired case to LBT and asked Veral to make as heavy a plain based bullet as would stabilize in a 16 inch twist which would not exceed 2.54 inches overall when loaded in necked-up .30-30 brass.  He returned a 4-cavity mold which casts a 260-grain plain base bullet 0.99 inch long, .361 diameter, with .225 meplat, crimp groove 0.5” back from the nose, with three driving bands 0.11” wide and two grease grooves. Absolutely beautiful, casting good bullets immediately, giving splendid shooting results easily. 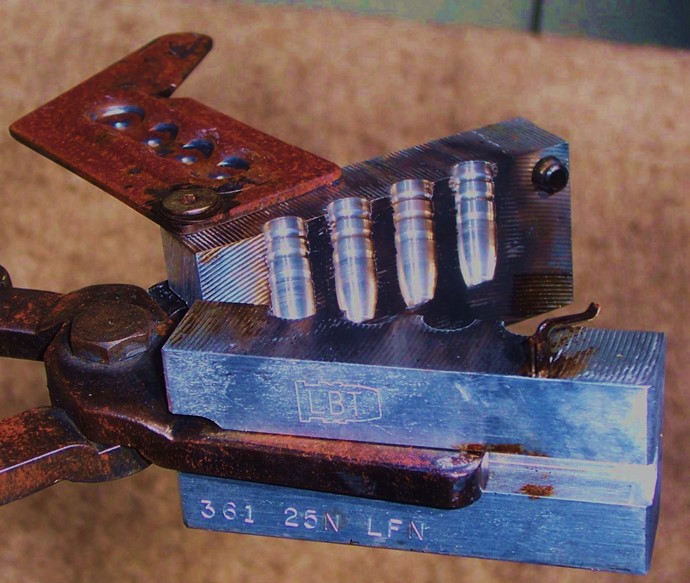 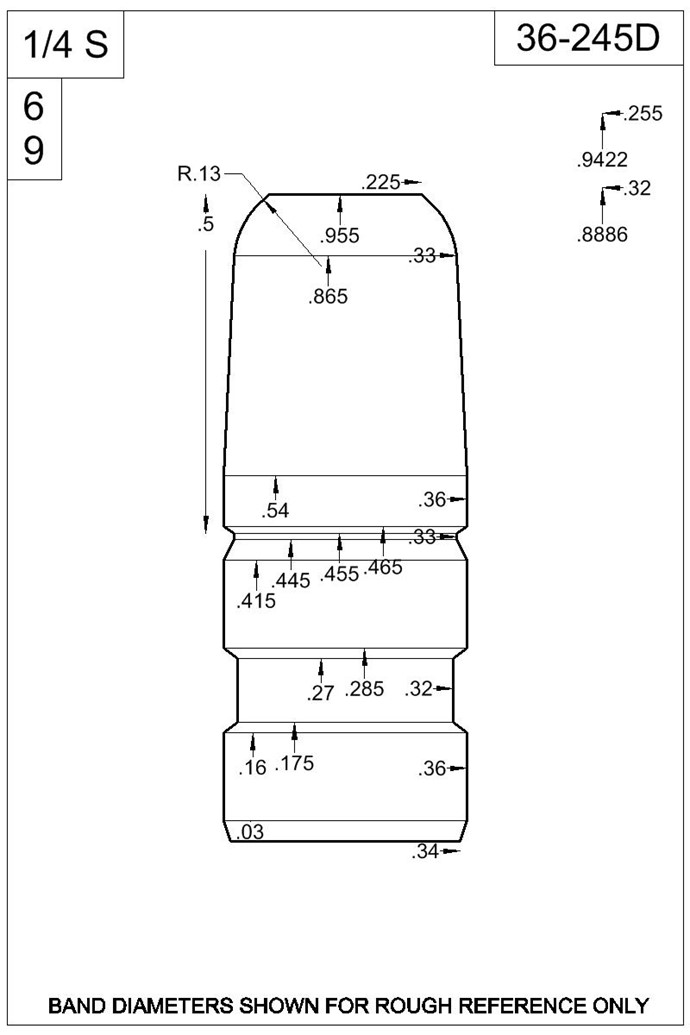 ED.  You reading this?

Off the top of my head, I guessed a 35/30-30 would be ballistically about like a .35 Remington.  That's not outside the ball park, but, note that Ed actually made measurements and this wildcat cartridge has less volume than a 35 Remington, so one needs to use 35 Remington data with caution and realize that even listed maximum loads for cast bullets for the 35 Remington will very likely give unsafe pressures in this cartridge!