I know that is certainly nothing to brag about, maybe should be down right ashamed by today's standards...but....hey, I had a lot of fun today!!!! 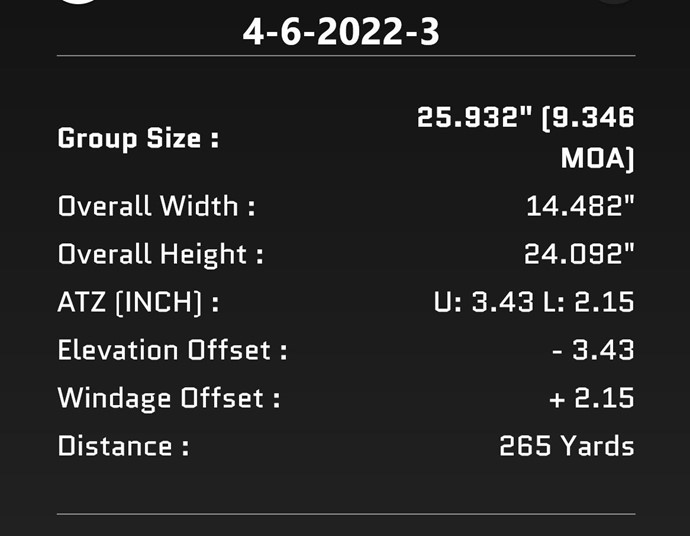 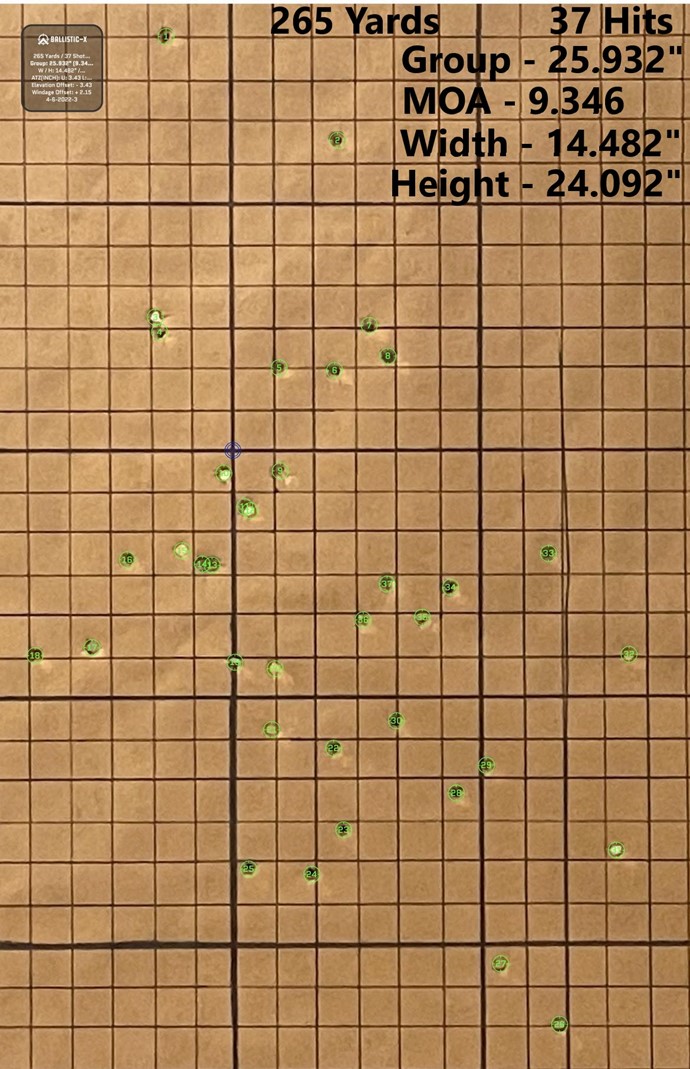 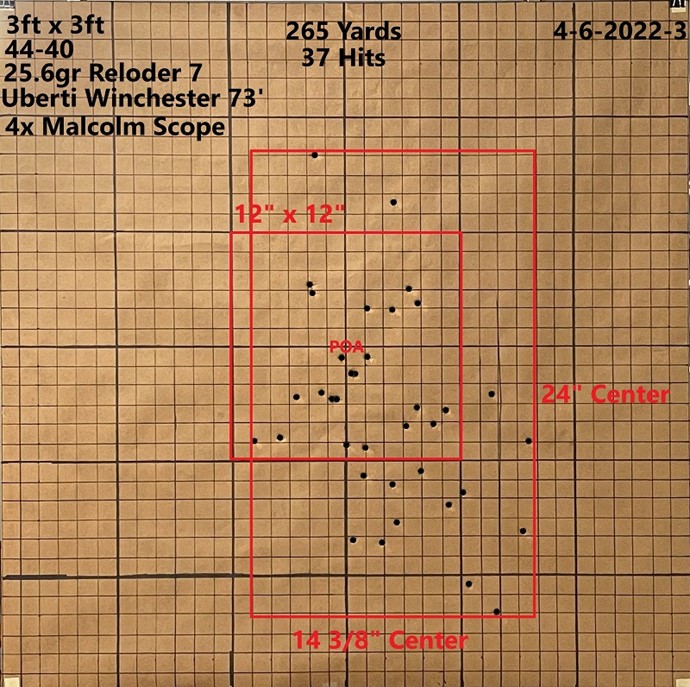 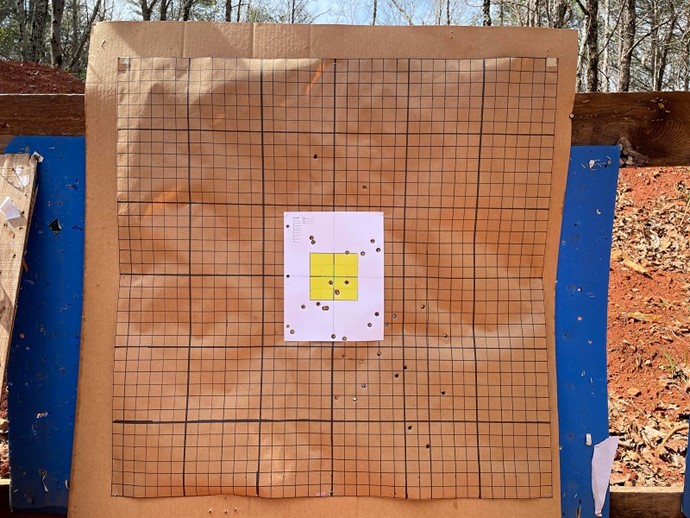 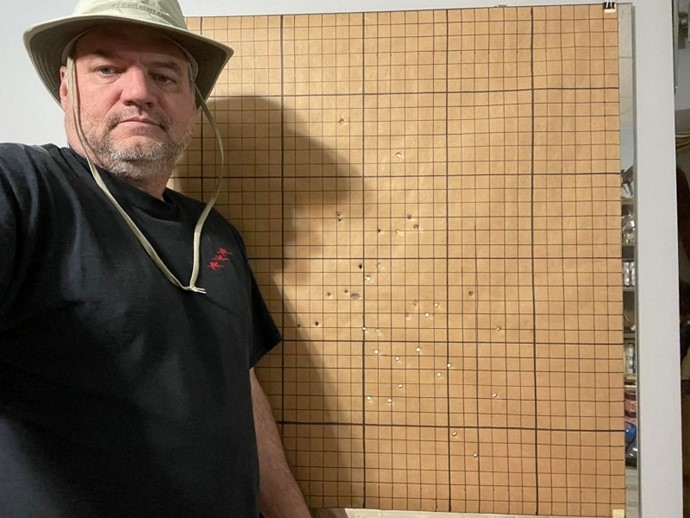 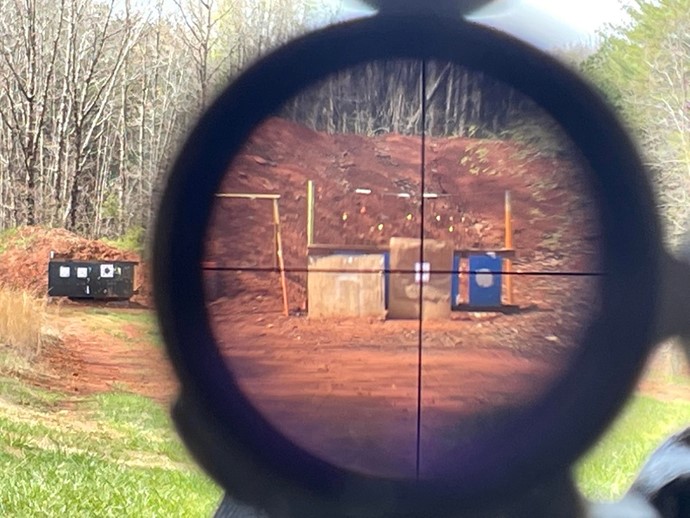 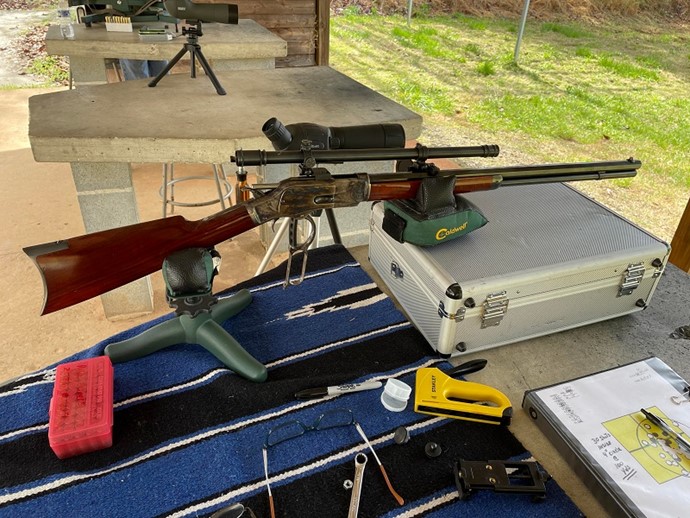 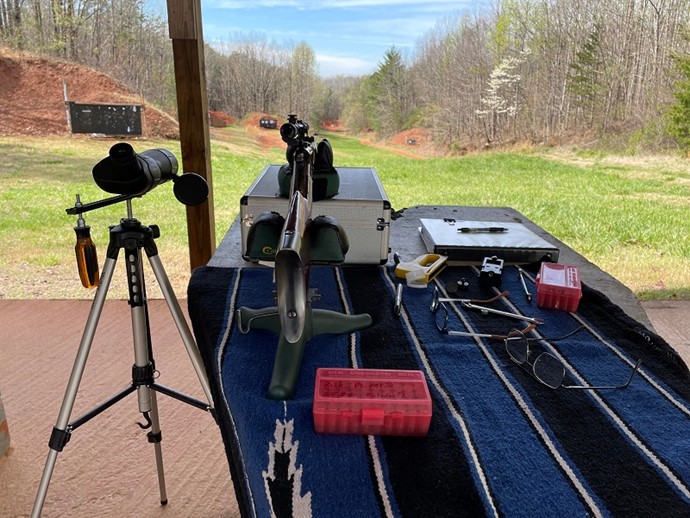 looks like that would knock a portly desperado clean out of the saddle at a fur distance ...

just like them western movies i watched as a kid ...

That's an usual result for you.  Have you changed anything?

Those of you who remember the TV series "Lonesome Dove", think of the scene where Robert Duvall shoots the guy in the butt at 250 yards with his '73 Winchester.  This proves that it could have been done.

Sort of...last August or Sept I noticed the scope was loose so I had to take it off and lock everything back down. For hunting season I took three shots and zeroed it in for 75 yards. Today at 75 yards, the first shot was 4 3/4" high, the second shot was on the bullseye. I made one adjustment and dumped 6 more on paper at 200 yards. Played with some skeets in the dirt then went for the gong at 265. After a few adjustments, I was back in business!

It was a good day! I think all but maybe two under the shoulder would have made it's mark in a perfect world!!

I thought this was kind of neat! 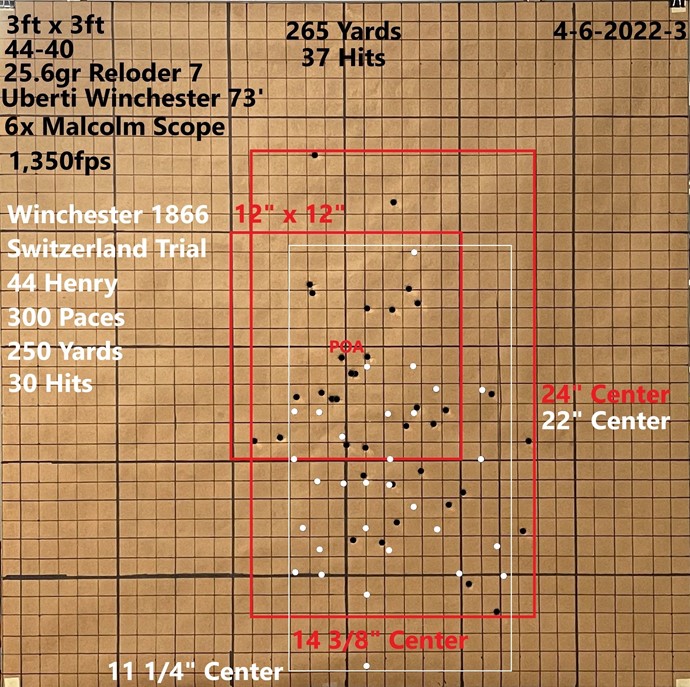 The Battle of Königgrätz

Say what? During the time between 14 June and 22 July 1866, the Prussians fought the Austrians. These battles were well observed by the Swiss. It was here that the Swiss decided that they were in need of modern breech-loading weapons.

The Swiss made a Decree that they would find and arm their sharpshooters and Army with breech-loading rifles on 20 July 1866.

During the 6th and 8th days of October, Winchester had already shipped the Model of 1866 to Switzerland for the Swiss Trials. On these two days the aforementioned targets were made.

On the 12th of October the Swiss government proposed an order for 8,000 repeaters for their best outfits but soon changed the proposal to between 90,000 and 110,000 repeaters to arm all of their soldiers. A condition to the contract would be that Winchester would also provide all of the tooling necessary for the 66's to be manufactured in Switzerland. Winchester could not or would not agree and offered some sort of counteroffer with the Henry rifle. The deal fell quiet and eventually Winchester backed off. I am unsure of the details.

The Report To The Commission For The Introduction Of The Breech-Loading Arms was dated Oct 1866 and published in Winchester's 1873 catalog. The information I posted above is not included in the report. The report talks about the Winchester Rifle - A. The Trajectory, B. The Precision and C. The Rapidity of Fire.

Now you know the rest of the story.https://sites.google.com/view/44winchester/chasing-the-44-40/winchester-history/1866-switzerland-trials

Bryan!  You done got chicken pox!

I added a few more. The blue dots are the 10 shots John Kort made back in 2011, black powder loads reduced to 44 Henry ballistics. 250 yards

Bryan, you are such a handsome devil.

Believe all of your shots would be on an Army "E" silhouette and all but the two highest shots on the "F" silhouette at your 265 yard range, which closely approximates the 250 meter battlesight zero used for zeroing the Army's M4 carbine!

With hog lard and beeswax lube it would be just the recipe for Afghanistan.  Hooah!

Thanks Guys, sorry for the long delay, still flying around over on the east coast of NC.

Ed, that's good news, I always wondered what a good qualification was for the M4 carbine.

DBW, let me get home and dig out the info om the mounts.

Those of you who remember the TV series "Lonesome Dove", think of the scene where Robert Duvall shoots the guy in the butt at 250 yards with his '73 Winchester.  This proves that it could have been done.

If Robert Duvall did it, then it is gospel. For sure.

Gus has his sights set to about 800 yards 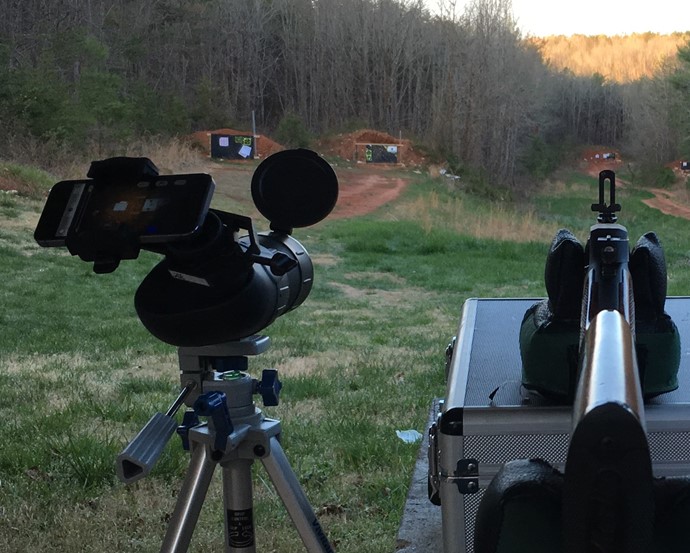 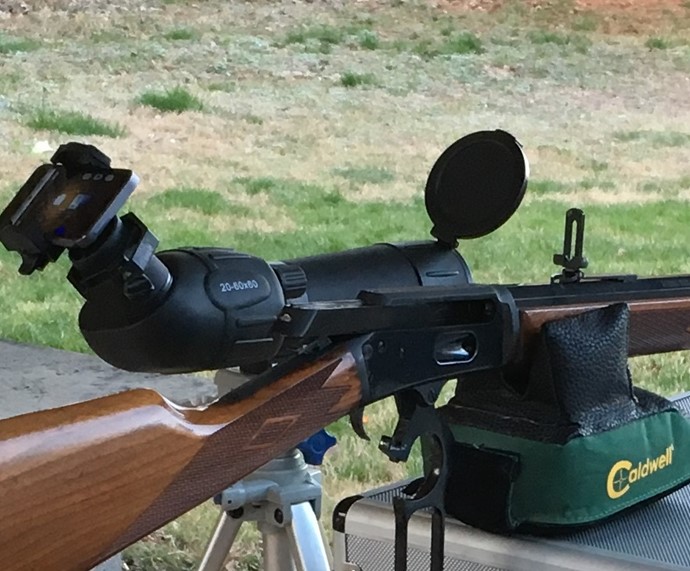 What kind of mount are you using in the photograph showing a smart phone being used as a display screen for the spotting scope?  Very interesting.

I just ordered one of those $30 Wyze Wi-Fi cameras to try out as a remote target camera.  But using your configuration would make it easy to record shot strike order on the target too.

I don't use it any more but I can show you what I use now when I get home. The problem I had with that mount is that is was hard to get the lens centered. I can also use my aviation headset to talk into the iphone while shooting. Mostly as a reference (verbal documentation) on why I did what I did on the shot or to make a correction for the the next shot.

Once I had about three cameras set up, two iphones and a gopro. I really liked it but it was a real royal pain in the butt to edit everything on my computer with the lack of proper technology and skill.

Thank you for sharing that video.  It is a lot of work setting all that up, but the end result is very nice.

Your 200 yard target video sequence illustrates why I was interested in the Wyze wi-fi camera.  The local camera at the distant target is crystal clear, and the smart phone through the spotting scope shows all the mirage and lack of clarity that we sometimes get looking at distant things through optics.

I ordered the wi-fi camera on Amazon last night, and I'll be darned, a young lady in her personal car dropped it off on my front step at 6am this morning.  The world is becoming unrecognizable, it is hard to imagine how fast things move these days.

I look forward to seeing what you are using now, when you have time to post it.

I am eager to see how it works. I have access to a gopro and is what I have sitting at the long distance targets. Problem is the wifi only works to about 20 yards. I did some basic research and the older gopro's wifi was set to a much longer range, nearly 100 yards. I guess they saw an opportunity, shortened the distance and now sell a box to extend the range. Kind of made me mad so I never purchased an wifi extension box.

For some reason, my iPhone keeps dropping it's mobile hotspot signal.

I was able to connect to it once, and make it work on the iPhone wi-fi hotspot.  But my phone keeps dropping the signal.  So I will have to investigate more.

This thing is tiny! 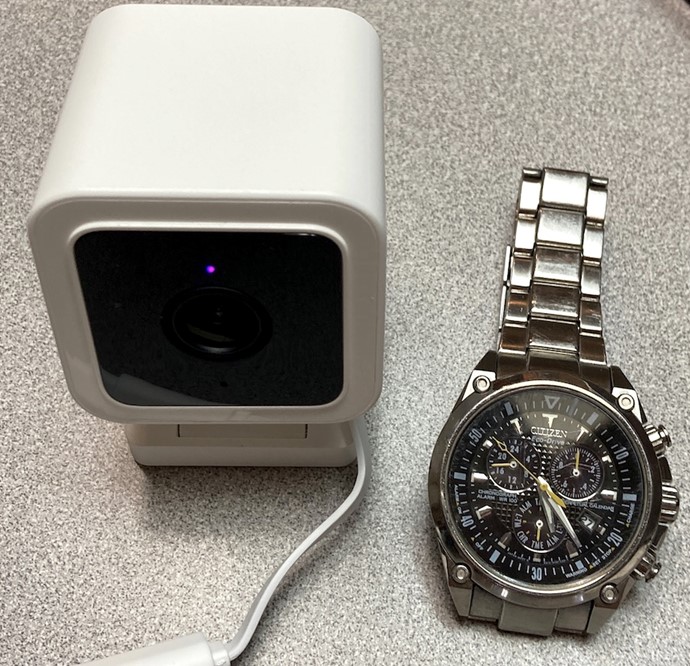 The reason I was interested in this camera was that it costs $35.  So if a glancing bullet takes it out - you are not out much money compared to a go pro.

But I need to overcome the issues with my phone first.

I like those but I keep seeing where they have to have a base that uses an electrical plug. The range I go too has no electricity. I have a hotspot on my iphone as well.......I am keeping an eye on this.

Here is what I am using now at the bench. I can hook up a mic and record my shots 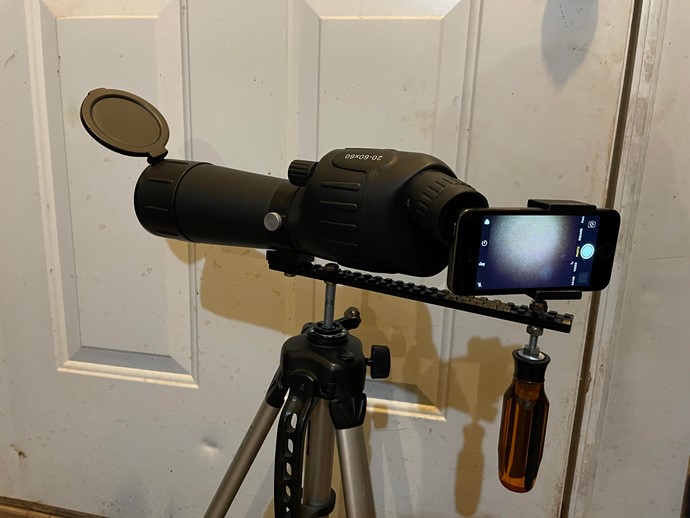 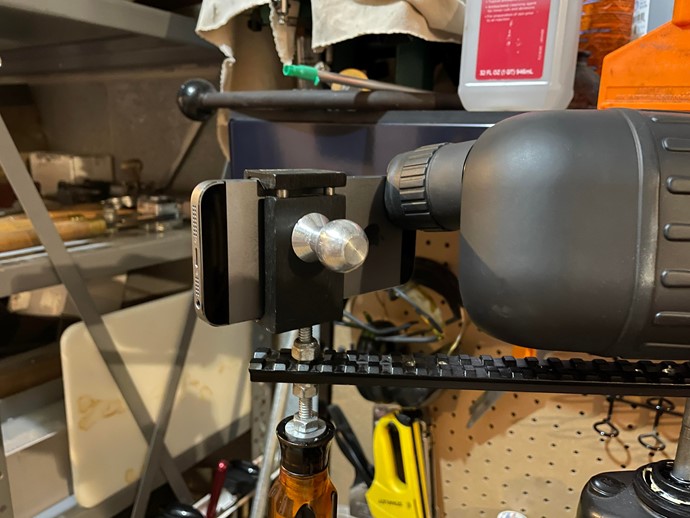 That looks like a good stout configuration.  I've modified a couple of my old tripods to hold brass catchers and pellet gun traps.  Looks like I have another project to try out.  I picked up on your mention of the audio input in your earlier post.  That would be a good fool proof way to keep good notes.  I'll have to give that a try too.

I still can't get the camera to connect to my phone's wi-fi hot spot, which is the only way to use it in the field or at the range.  It connects to the home network wi-fi flawlessly.  The manufacturer hasn't responded to my query yet - but has already sent an email asking to rate their response to my question.  Putting the cart before the horse.....

Yeah, the main reason I use it is for verbal notes...LOL. I did try and publish a few narrated videos but I am just not good enough for that....especially when other folks are around thinking I am a weirdo  hehehehe

I notice that in a lot of Youtube video's, people narrate over the original audio at a later time.  I am not sure how to do that, I do know how to do basic video editing - but doing something professional would a long way from where my skill levels are now.

Bryan;  I have just received a Uberti Win 1873 32-20 rifle and am waiting for a front scope mount piece that was missing when I received the scope and mounts. All the data I have on the 32-20 states not for use on weak actions, but factory ammo OK.so was not sure how to proceed. Your experience with the 44-40 was helpful and with the pressure data in the Lyman Cast Bullet Handbook I am comfortable with developing cast loads for my rifle. I really appreciate the work you have done on the 44-40 and your work on developing loads for the Win. 73. They are such slick actions and are fine for mild loads which can be very effective, as you have made clear in your article. Also until I saw your photos I was not aware of scopes and mounts available for the Win 73 which was the clincher on getting a rifle and cartridge that I have wanted for 50 years. Many thanks.............DBW

That is great DBW! I certainly hope it works out to your liking.  When installing the scope and mounts, you may want to double check for tight dovetail fits. If you don't like they way the mounts mate up, call them and make them swap them out until you get the tight fit you want.

Also, when you get the mounts on, make sure to add some threadlock to the screws or they will back out. Happened to me. I used the blue color lock. 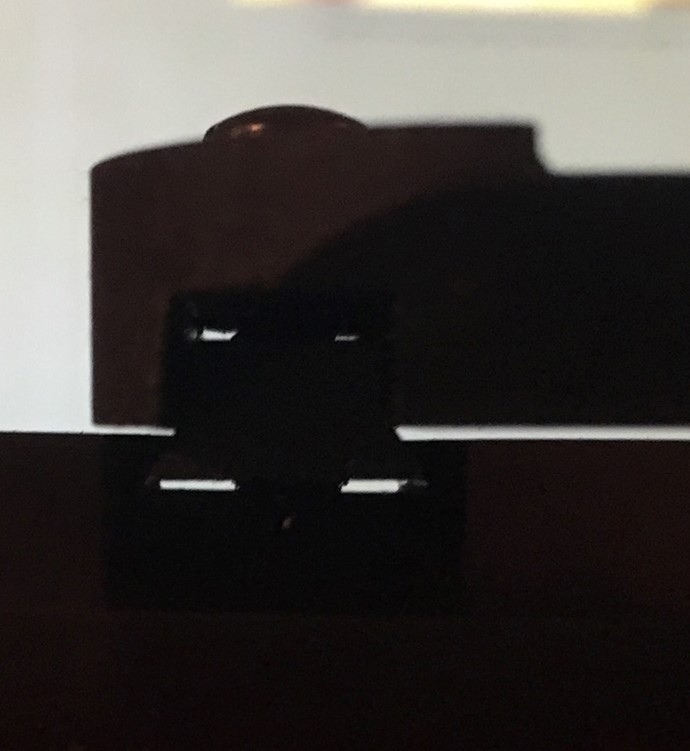 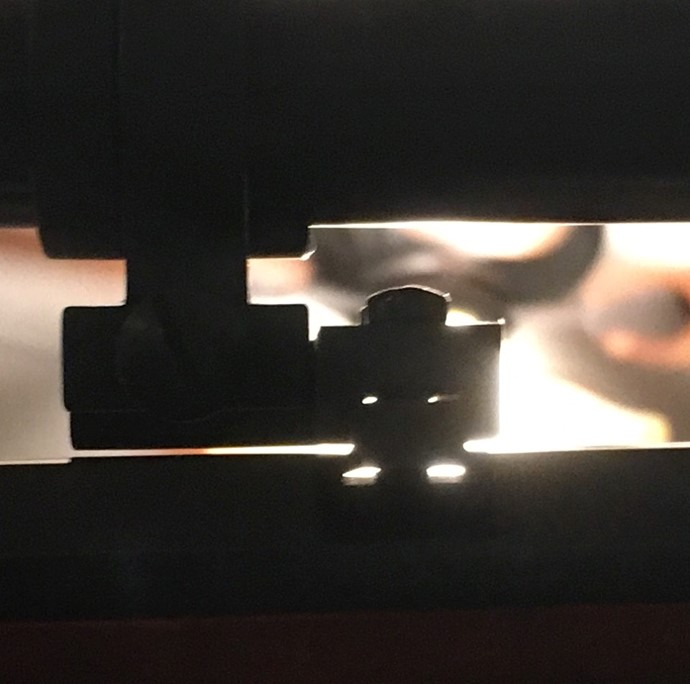